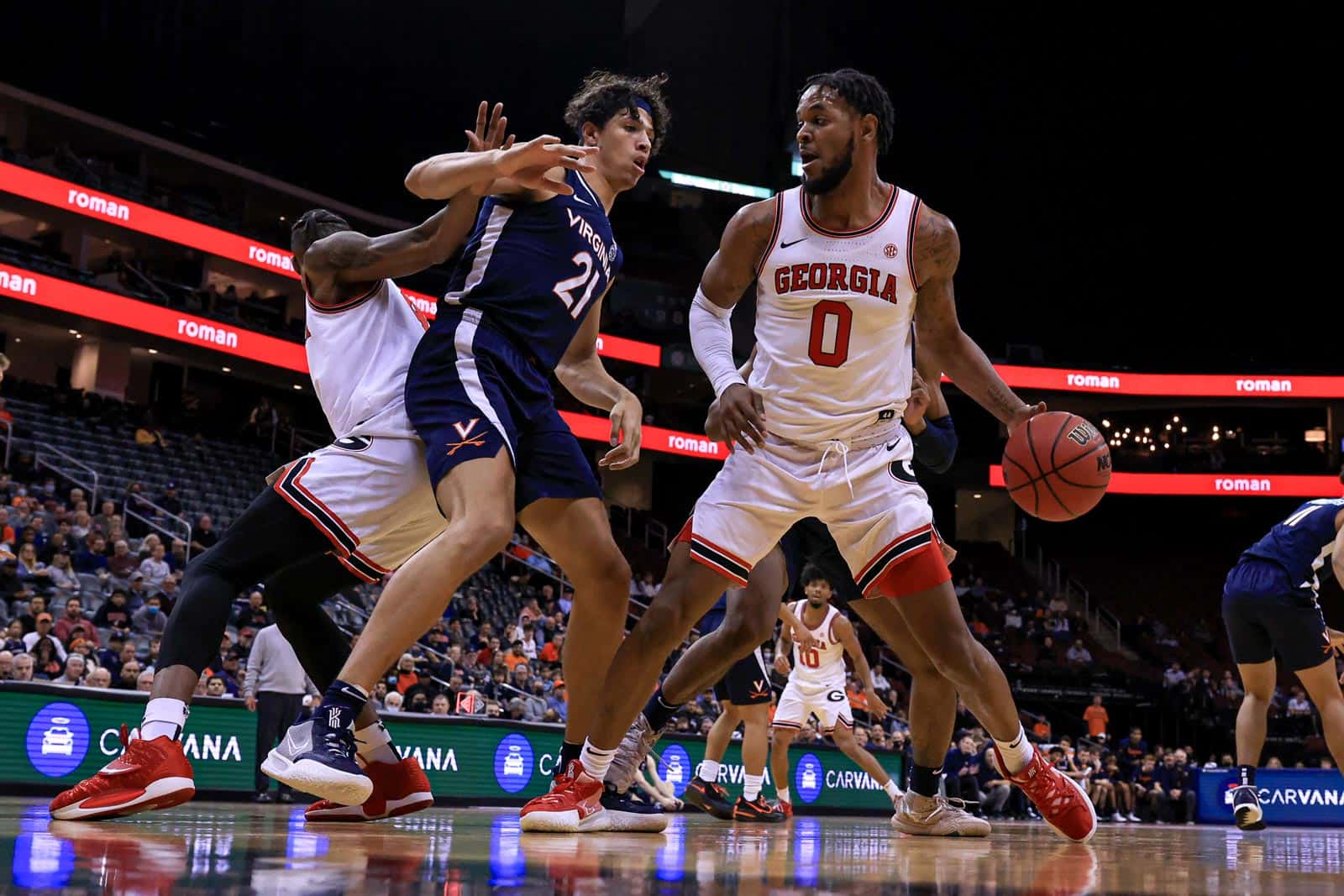 NEWARK, N.J. – In a back-and-forth contest, the University of Georgia men’s basketball team fell to Virginia, 65-55, in the semifinals of the Roman Legends Classic Monday evening at the Prudential Center.

Senior Braelen Bridges led Georgia (2-3) in scoring with 14 points on 6-for-11 shooting with five rebounds. Graduate Jailyn Ingram posted his 11th career double-double and first with Georgia as he scored 10 points and grabbed 12 rebounds. Fellow graduate Aaron Cook led the Bulldogs with eight assists. For the game, Georgia shot 37 percent from the field and outrebounded Virginia (3-2) by a 42-29 margin.

“Our guys kept fighting and going through it,” said Georgia head coach Tom Crean following the game. “We’ll shoot better, there’s no doubt about it…We were good in the first half (with ball security), but we weren’t as good in the second half, but they have some outstanding guard play.”

Georgia quickly ran out to a 6-2 lead in the opening three minutes of play with solid play inside the paint, but the lead was short-lived as Virginia countered with an 11-0 run powered by Armaan Franklin. The Bulldogs worked to narrow the margin with back-to-back 3-pointers from Ingram, keeping the margin within five for much of the half until Bridges retook the lead with a layup at the 4:28 mark.

Both teams continued to trade baskets as the first half neared its conclusion with Bridges putting the Bulldogs ahead for the remainder of the half with a pair of free throw makes, followed by a jumper with a minute left. After the Cavaliers brought the score to within one in the final seconds, junior Jaxon Etter drew a foul on a mid-court heave at the buzzer, hitting two free throws with zeroes on the clock to make it 34-31 Georgia at halftime.

Beginning with a Kehei Clark trey in the opening minute, Virginia reasserted itself to open the second half, scoring seven unanswered as Georgia went over five minutes without a score. The Cavaliers’ offense then sputtered itself with three scoreless minutes and allowed the Bulldogs to retake the lead midway through the half, highlighted by a thunderous dunk from junior Tyron McMillan. Heading into the under-eight timeout, both teams entered the bonus as the game transitioned to the foul line.

After McMillan tied his career-high point total with a third dunk, Virginia rattled off a quick 6-0 run, but a fast break 3-pointer from Oquendo closed Georgia to within two. Down four with under three to play, Cook was denied at the rim by Kadin Shedrick, followed by a miss from outside that led to a Cavalier basket. The Bulldogs’ cause was further impaired as Bridges fouled out with under two minutes remaining. In desperate need of a basket, Shedrick blocked another Bulldog shot, his fourth of the evening, before joining Clark in sealing the game at the foul line.

Georgia will return to the court Tuesday for the Romans Legends Classic consolation game against the loser of the Northwestern-Providence matchup. The contest will tip at 5 p.m. and will be televised on ESPN2.