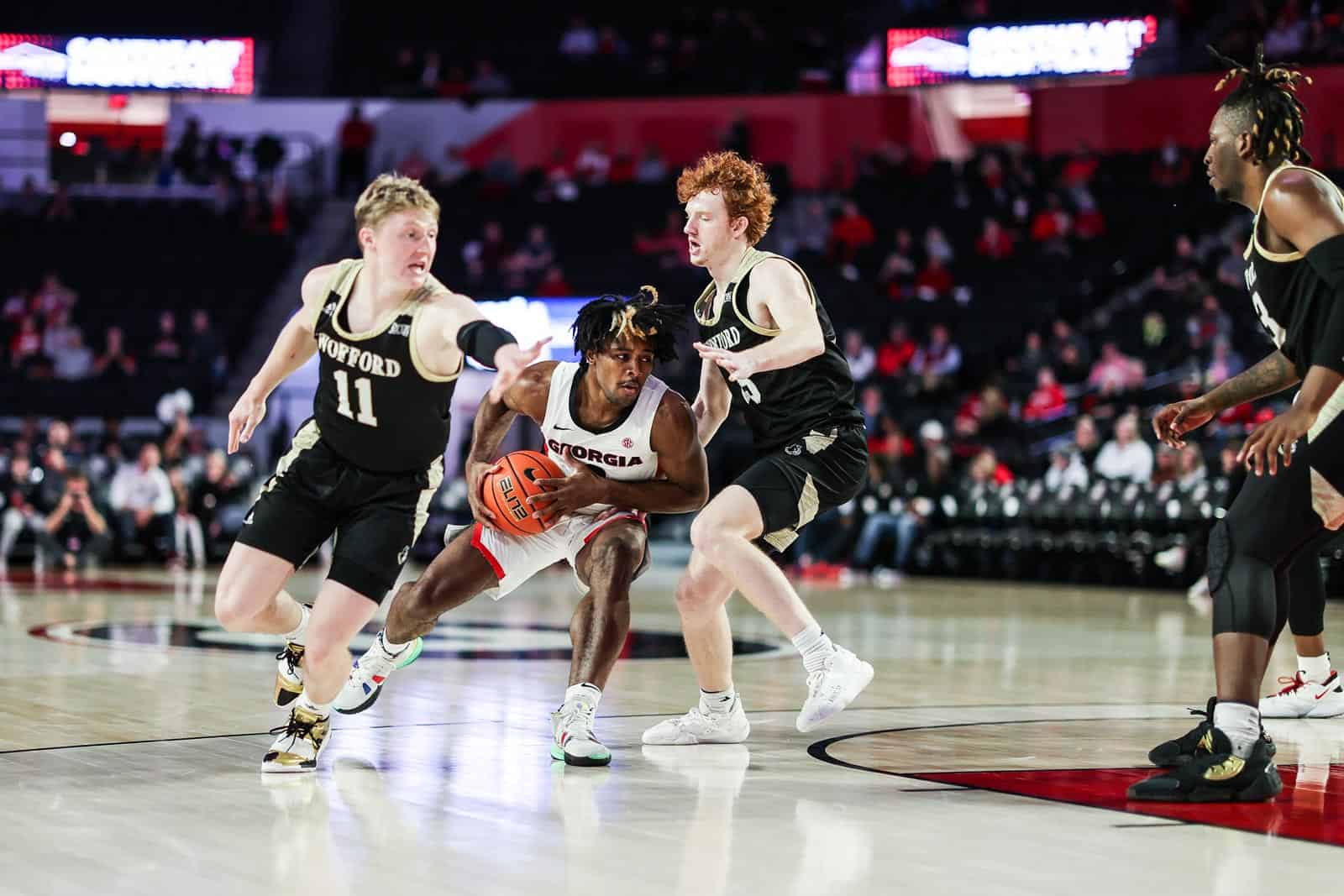 ATHENS, Ga. – The University of Georgia men’s basketball team dropped a heartbreaker to Wofford, 68-65, on Sunday evening at Stegeman Coliseum.

“It was clear early that it was going to be a grinder for us to get through this,” Georgia head coach Tom Crean said. “We had some (players) that gave their very best and some who just weren’t up to the challenge of it. We have to keep finding ways to make the game simpler for them, not try to make plays that aren’t there. We will. The turnovers in the second half and the amount of free-throws that they shot in the second half, those were big turning points.”

Wofford (5-2) won the tip and scored the game’s first basket. Georgia (2-5) quickly responded, going on a two-minute 9-0 run, to take a 9-3 lead. The Terriers countered the Bulldogs’ run with their own 10-0 run, holding Georgia scoreless for six minutes. Georgia entered the second media timeout down, 13-10.

Ingram broke the scoring drought for the Bulldogs, and the two squads entered a defensive battle with Georgia in foul trouble — Ingram, redshirt-senior Braelen Bridges, Oquendo and freshman Christian Wright all with two fouls. The Bulldogs drew within one of the Terriers, 15-14, with 9:25 remaining and regained the lead thanks to a pair of free throws by junior Dalen Ridgnal. The game went back-and-forth before Abdur-Rahim drained a three from the top of the key to give Georgia a 33-32 lead going into halftime. The Bulldogs shot 42 percent from the field in the first half, including four three-pointers on 40 percent shooting beyond the arc.

After swapping buckets to open the second half, Georgia took a quick four-point lead, 38-34, thanks to a pair of free throws by Bridges and a fast break slam dunk by Oquendo, but the Terriers quickly tied things back up at 38 apiece. The teams continued to play defensively until Wofford went on a 7-0 run to take a 47-44 lead with 11 minutes remaining. Both teams continued to swap baskets before the Terriers jumped out to a seven-point lead, 57-50, with 6:35 left in the game.

The Bulldogs got back within two of the Terriers thanks to another slam dunk by Oquendo and a nifty jumper by Ingram, but Wofford responded with a hard-earned basket in the paint to keep the lead, 61-57 with 3:42 remaining. With one minute remaining, Aaron Cook drained a three from the wing to draw the Bulldogs within two, 65-63. Georgia had a chance to tie things up at the buzzer, but Oquendo’s three was off the mark.

Georgia will return to the court Wednesday, Dec. 1 to host No. 9 Memphis at Stegeman Coliseum. The contest will tip at 7 p.m. and will be broadcast on SEC Network. On Jan. 4, 2020, the Bulldogs defeated the ninth-ranked Tigers 65-62 in their last meeting. Georgia holds a 2-1 all-time series lead over Memphis.

On what changed for his team in the second half…
“I guess I underestimated, and our staff underestimated, how unhealthy a couple of guys were trying to recover from some things. Obviously, there were some times where we couldn’t get over our own adversities and circumstances trying to make some plays that weren’t there. It was clear early that it was going to be a grinder for us to get through this. We had some that gave their very best, and some others, who just weren’t up to the challenge of it. We have to keep finding ways to make the game simpler for them, not try to make plays that aren’t there. We will. The turnovers in the second half and the amount of free-throws that they shot in the second half, those were big turning points. For a team that shot 70 percent in the second half, you are usually not going to lose if you shoot 70 percent in the second half. We gave up too many easy baskets and too many free-throws.”

On Jabri Abdur-Rahim…
“It was nice to see him shoot the ball that way. He is fully capable. He works extremely hard. Hopefully that will build confidence in him that will help him on the defensive end as well. He did a good job. It was good to see him play that way.”

On what the team needs to work on before Wednesday’s game…
“I’m going to get on the film. That’s the reason I’m coming in here so fast because I don’t want to waste any valuable time tonight on what we’ve got to do to get better. Obviously, we’re going to need to handle pressure really well on Wednesday. We’re going to have to be much better guarding the post. We’ve got to get healthy. Hopefully, we can get healthy over the next couple of days. That’s not an excuse. It’s just a fact. We had some guys that just really struggled playing.”

On guarding a team that’s moving the ball so well…
“When you’re playing a team like that, your whole deal is not to help. You’re not trying to be in an over helping situation. They are a really good passing team. When we pass the ball like that and we’re moving the ball well, we do a good job with that. They’re well coached. You knew it was going to be that kind of game in the sense of how well they move it and how well they shoot it. Whether it’s the switching, whether its stand in position with early help and early recovery, that’s the key. We had some guys get out of position. Then, you end up chasing the ball in certain possessions. It was really not as much that as it was our inability to carry out the game plan on low post defense, especially the adjustments made in the second half. For one reason or another, no matter who I had in, we struggled with guarding the post and being in the position that we needed to. It’s doing your work early and being in the position and being proactive rather than reactive. We weren’t as good at that today.”

On the second half turnovers…
“It is very frustrating. Once you start trying to build some momentum to take that lead and potentially stretch it, the turnovers definitely hurt it, especially if they execute on the turnovers. Limiting those turnovers would have helped us, but it is definitely frustrating to continue to turn the ball over in the matter of us trying to come back.”

On Jabri Abdur-Rahim’s performance…
“We always knew it was a matter of time until he hit shots. We know he hits shots day-in-day-out. He is constantly in the gym, and he continues to push and shoot the ball with confidence because he knows he is going to make them. Tonight was the first example of what he can do for the rest of the season.”

On Wofford…
“They definitely play team basketball. They continue to move the ball, which is double with the guard. We had trouble with it. We try to do the same thing with other teams because no one wants to guard all of that movement. It says communication, energy, and focus. They definitely did that, and hit us when we had a couple mental lapse.”

On his 20-point effort…
“The thing about basketball is that it’s just makes and misses. Shots are going to come and go. Tonight, they just fell. The other nights they didn’t. You can’t put too much emphasis on makes and misses. I tried to get myself gong doing some other stuff, but I had some good looks early. They just happened to fall.”

On turnovers and other points of emphasis…
“I think there’s a lot we can learn from the last couple of games. Especially just from taking care of the ball, it starts with everybody. We just got to take more pride on that end. Going into Memphis, we should look to take more pride defensively. Sometimes they got to the lane a little easy, and that’s been kind of happening the last couple of games. I think, when we get back in practice, everybody is going to hold themselves accountable to stand in front of their man and be better defensively. Just staying positive, it’s a long season. We have a couple of losses early, but everybody is just staying positive. Knowing we have to get better is the thing that I think we should deal with going forward.”

On his confidence…
“My confidence, I try not to let it waver. I try not to overreact on some misses early in the season. Like I said, it’s going to come and go. I am confident in the work that I put in, and my teammates are confident in me along with Coach Crean and all the coaching staff. They just kept telling me to shoot. When you have teammates and all the coaches telling you to keep shooting, you’re just going to keep shooting. I try not to wear it, and I came out with the same mentality that I come out with every game. This game, I tried to get myself going doing other things, talking on defense and trying to get myself involved in the game more. That’s the kind of stuff they’ve been emphasizing to me a little bit, so I tried to focus on that. I got some looks early, and they just happened to fall tonight. I try not to let my confidence vary. I believe in myself, and I believe in the work that I put in. I try to stay consistent with that.”

On his play before half-time…
“Coach drew up a play for Aaron (Cook) to get downhill, and I was going to be in the corner. I knew that I had to be ready to shoot. He kicked it to me, and we kind of got caught in traffic a little bit, so I brought it out. I looked up at the clock, and there wasn’t that much time left. Like I said, I am confident in my shot, and I am confident in the work that I put in. That is a shot that I work on every day, so I felt confident, and I just let it go and it fell.”

On Wofford…
“Coming into the game, Coach Crean emphasized to us how good of a team Wofford is. Obviously, they aren’t in a major conference or anything, but we knew they were a good team. Coach Crean said they are probably going to win their league this year. We knew they were a good team, and they are a good team. They showed that tonight. They did a really good job moving the ball. They really aren’t selfish. When you play teams like that, that aren’t selfish, it is just really hard. Not one person was just looking