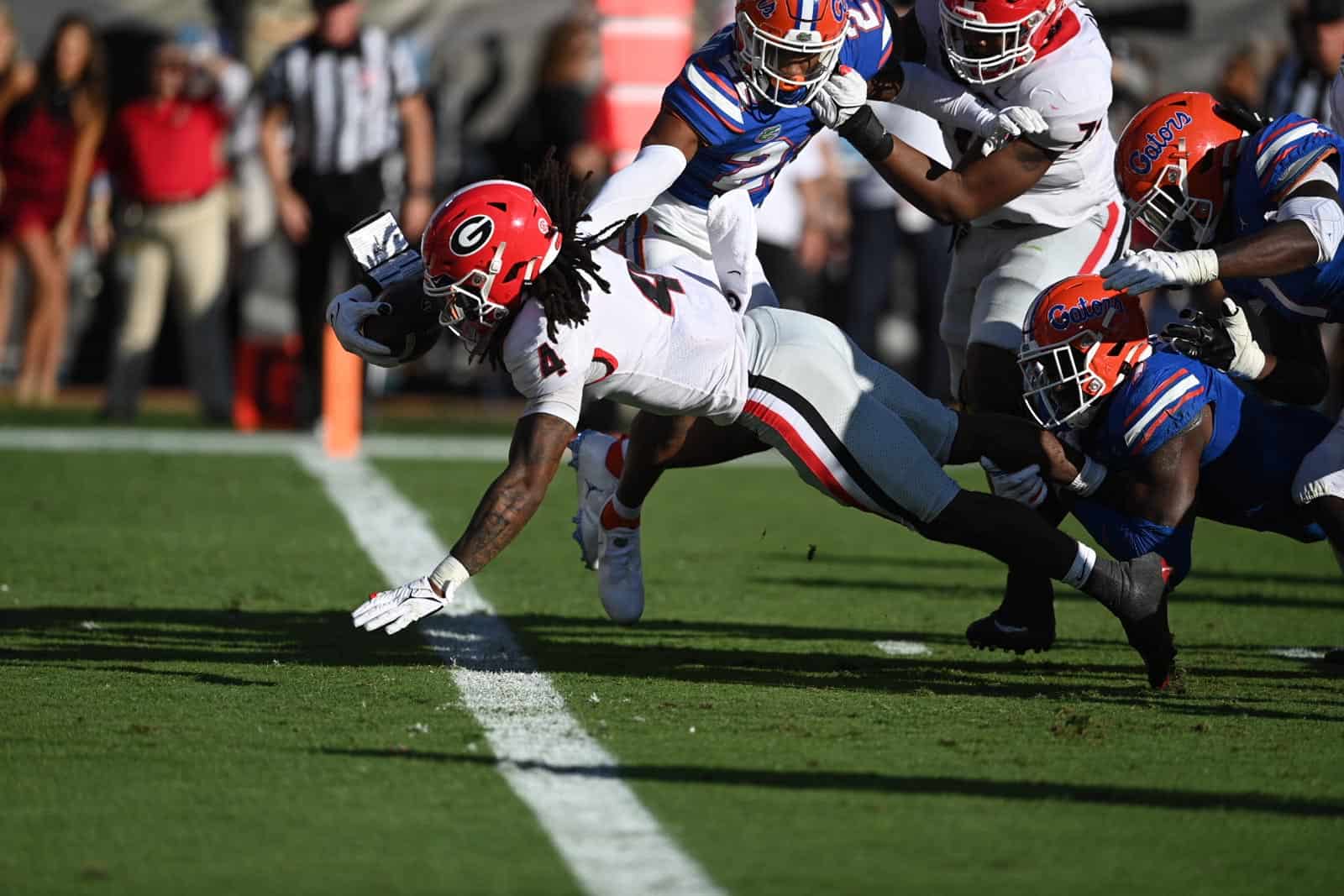 JACKSONVILLE, Fla. – Fueled by a 21-point burst before halftime, the University of Georgia remained unbeaten with a decisive 34-7 victory over Florida Saturday afternoon before 76,141 spectators at TIAA Bank Field and a CBS national television audience.

Georgia quarterback Stetson Bennett finished 10-for-19 for 161 yards and one touchdown, while tailback Zamir White tallied a season-high 105 yards on 14 carries and wideout Kearis Jackson led in receiving with three catches for 59 yards. Overall, Georgia (8-0, 6-0 SEC) finished with 354 yards, with Florida (4-4, 2-4 SEC) outgaining the Bulldogs by one yard. Linebacker Quay Walker led the Georgia defense with a career-high 13 tackles with safety Lewis Cine pitching in with eight.

Georgia moved quickly on its opening drive following a 31-yard kickoff return from Jackson, picking up three first downs on its first four plays to reach the Florida 19-yard line. Unfortunately for the Bulldogs, the drive came away without points as Bennett was flagged for intentional grounding on third-and-1, followed by a missed 46-yard field goal by Jack Podlesny.

After forcing a Florida three-and-out, the Bulldogs again entered Gator territory, but another third down penalty stalled the drive. The defenses continued to excel until Florida tailback Dameon Pierce rushed up the middle for a 19-yard gain to the Georgia 36-yard line. Like the Bulldogs before, the Gators did not score on the drive as Jace Christmann’s 51-yard attempt missed as the first quarter clock expired.

As the second quarter opened, the Georgia offense came to life starting with a 12-yard completion from Bennett to Jackson, eventually entering the red zone on a 20-yard scamper from Bennett to the 7-yard line. However, another stall forced the Bulldogs to settle for a 21-yard Podlesny field goal, capping off an 11-play, 63-yard drive. On the ensuing Florida drive, Gator starting quarterback Anthony Richardson converted on fourth-and-2 at the Georgia 40, but a combined sack by Jalen Carter and Jordan Davis led to a fourth down stop.

Taking over at the Florida 34-yard line, Bennett found Darnell Washington for a 32-yard completion, but on the subsequent play, Bennett’s deep ball was picked off by Rashad Torrence at the 4-yard line. With Florida near its goal line, the Georgia defense stepped up as Nolan Smith stripped Richardson and set the Bulldogs up at the 11-yard line. In one play, Georgia capitalized as James Cook rushed for a touchdown to make the score 10-0.

On the following drive, Smith notched another turnover as he picked off Richardson’s second down pass off the deflection by Travon Walker, with pressure coming from Nakobe Dean. Georgia again took just one play to convert as Bennett hit Jackson for a falling, 36-yard touchdown in the left corner of the end zone. The scoring barrage concluded as Dean picked off Richardson and returned it for a 50-yard touchdown, the third pick-six of the season for the Bulldogs. With three touchdowns in the final 2:22 of the half, Georgia headed to the locker room with a 24-0 lead.

Georgia’s first drive of the second half ended prematurely as Kenny McIntosh fumbled at the Georgia 49-yard line. Powered by an 18-yard Pierce rush, Florida reached the Georgia 6, but Emory Jones’ third down pass was blocked at the line by Kelee Ringo, leading to a miss from 23 yards out by Christmann. Looking to seal the game, Brock Bowers picked up 38 yards on a nifty throw from Bennett with Podlesny later connecting on a 42-yard field goal.

The Gators again reached Bulldog territory to open the fourth quarter but were once more stifled as Dean broke up Jones’ fourth-down pass. On the ensuing drive, Bennett was picked off for the second time by Torrence at the Florida 11. Florida moved down the field on a prolonged drive using Jones’ passing game, but he used his legs to score from two yards out with 2:49 remaining in the game. Nonetheless, the Bulldogs added one more score to wrap up the day as White scored from 42 yards out.

“(The running backs) ran really tough,” said Smart. “We are trying to get (Kenny) McIntosh back all the way healthy and Zamir (White) and James (Cook) took it over. They did a really good job with really physical runs. We did a good job upfront running the counter, and I am really proud of the way those guys played.”

Georgia returns home next week as it plays host to Missouri (4-4, 1-3 SEC) on Saturday, Nov. 6 at Dooley Field at Sanford Stadium. The kickoff time and TV network for the game will be announced Sunday.

*Dominating Game Again For The Defense: Top-ranked Georgia, which came in leading the nation in Scoring Defense (6.6 points per game), held UF scoreless until 2:49 left in the game and won 34-7 to improve to 8-0, 6-0 SEC. It was the lowest point total by Florida in the Dan Mullen era. UF came in averaging 34.4 points a game. Today was the fifth time this season that the Bulldog defense has blanked a team in the first half.

Georgia now has allowed just five TDs this year and 53 points (6.6 ppg). The 53 points through eight games is the lowest in a season at this point since 1971 (46 points). Tthe Bulldogs forced three turnovers that led to 21 points including a pick-six by junior Nakobe Dean that covered 50 yards. It was his first TD and second career INT. The Bulldog defense has four TDs this year. Under Kirby Smart, the Bulldogs have 23 defense or special teams scores since 2016. Georgia improved to 20-1 when they register a non-offensive score in the Smart era.

Junior LB Nolan Smith caused and recovered a UF fumble at the UF 11. It was Smith’s second caused fumble this year and of his career. It led to an 11-yard TD run by senior James Cook and a 10-0 lead with 2:16 left. On UF’s next possession, Smith came up with his first career interception, getting it at the UF 36 after it was tipped by Travon Walker. It led to an immediate TD as Bennett snagged a 36-yard pass from Bennett for a 17-0 lead with 1:35 left in the first half.

The leading tackler was Quay Walker with a career-high 13. The Bulldogs are +3 in turnover margin and have scored 73 points off 13 turnovers. In the 2nd half, UF forced a fumble and took over at the UGA 49. It led to a missed field goal. Bennett threw two INTs, and they led to 7 points . Opponents have scored 27 points of 10
Bulldog miscues this year.

*Bennett Leads Bulldogs To Another Win: Georgia senior QB Stetson Bennett (10-for-19, 161 yards, 1 TD, 2 INT) got the start for the fourth straight week and fifth time overall this season. With the win, he improves to 9-2 as a starter including 5-0 this year. In the first half, Georgia had three scoring drives, a 63-yarder in 6:22 that ended with a field goal. The second one went for a TD that covered 11 yards on one play in six seconds. The six-second drive was the quickest this year. The third scoring drive was another in just one play, this time covering 36 yards. The defense took care of the fourth score, capping a 24-point outburst by the Bulldogs.

*Rushing Highlights: Georgia tallied 193 rushing yards on 33 attempts for a 5.8 average. Senior Zamir White led the team with 14 rushes for 105 yards including a 42-yard TD. It was his fourth career 100+ yard game. Senior James Cook had an 11-yard TD and finished with 46 yards on 10 carries.

*Array Of Targets: Six different receivers caught a pass. Junior Kearis Jackson had a team-high three catches for 59 yards including a 36-yarder for a TD. Sophomore TE Darnell Washington had 41 yards on two catches.

*Special Teams Summary: Senior punter Jake Camarda finished with two punts for a 48.5 average including a 51-yarder. Junior Jack Podlesny went 2-for-3 on field goals, making two (21 and 42 yards) and missing a 46-yarder. He is 12-for-16 on field goals this year. He made four PATs and is now 37-for-38 in PATs this year. Junior Kearis Jackson had one punt return for seven yards plus one kickoff return for 31 yards.

On how well the running backs played today …
“They ran really tough. We are trying to get Kenny (McIntosh) back all the way healthy and Zamir (White) and James (Cook) took it over. They did a really good job with really physical runs. We did a good job upfront running the counter, and I am really proud of the way those guys played.”

On Stetson Bennett and his resiliency …
“He does a really good job on some plays, and then you are holding your breath when he holds the ball. He has to make good decisions down the field. We can’t give the ball away. When it is not there – we are pretty good on the next down, so let’s play for the next down and not worry about that play. Making good decisions can be helpful with that. His legs and mobility were a big part of the game plan and he made two really good plays with his feet.”

On Georgia’s defense and the sequence right before the half …

“That changed the game. That momentum right before the half was just huge. It is what our guys do – they are havoc guys that cause problems, frustrate the quarterback and try to find different ways to affect the quarterback. Those turnovers are so big.”

On the defense performance to close out the half …
“The defense came out… We were struggling. We really didn’t play that great of a game offensively, the whole time. That starts with me, I didn’t play my best game at all. They came out, got us turnovers, and we capitalized on those turnovers. That’s what we had to do. Nakobe (Dean) getting that pick-six at the end was the icing on the cake, for the first half. It was a complete momentum change. It was 3-0, until that happened.”

On the defense performance to close out the half …
“It’s just momentum swings. Anyone could have done it. The Nakobe (Dean) pick-six was a momentum swing. When momentum goes the other way, guys feed off of each other. We always talk about connection. You feel it, and if you don’t see it on the sideline you would be absolutely absurd. I’m cheering the offense on when their up, and they are cheering us on. It’s all about connection and team comradery. Being together as one. We say, ‘One band, one sound.’ I was saying that before the game.”

On Stetson Bennett …
“Stetson Bennett. The Mailman. One thing about Stetson, he just works. He doesn’t listen to the noise. He’s a blue-collar guy. When you talk about trusting a guy, I trust him. He goes out there and works, puts his best foot forward every day. Even though it may not look pretty to y’all, he’s getting the job done.”

On the interception …
“This is my first game having an interception. That was really exciting for me.”