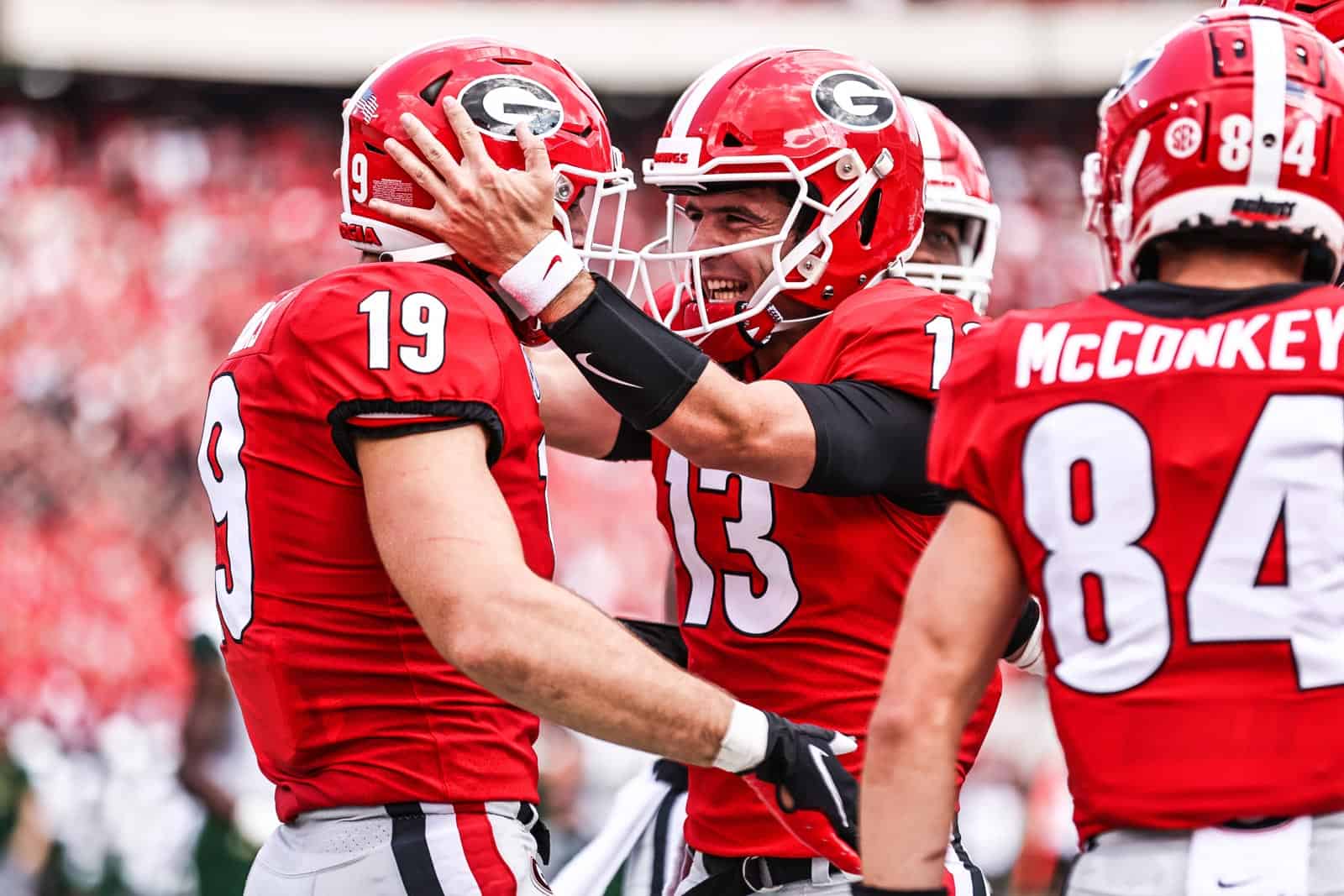 ATHENS, Ga. — Quarterback Stetson Bennett IV completed his first five passes, for 245 yards and four touchdowns, and the No. 2-ranked Georgia football team was rolling early Saturday in the Bulldogs’ 56-7 win over UAB at Sanford Stadium.

Georgia’s return to Dooley Field for the first time since Nov. 21, 2020, was about as triumphant as it could get. Saturday’s home opener was at full capacity and there was much to cheer about from the very outset.

Bennett, the redshirt senior starting for the sixth time in his career, in place of junior JT Daniels, completed a 73-yard touchdown pass on the second play from scrimmage. He hit wide-open sophomore wide receiver Jermaine Burton on the strike, setting the tone for the day. Four minutes later, after a stop by the Georgia (2-0) defense, Bennett connected with junior running back Kenny McIntosh for a 12-yard score and a 14-0 lead with 10:17 left in the first quarter.

Bennett finished the game 10 of 12 passing for 288 yards, with TD throws of 73, 12, 88, 61 and 9 yards. The five-touchdown game by Bennett, all coming in the first half, tied him with five others for the school record for touchdown passes in a game.

On Georgia’s third score, Bennett connected with freshman tight end Brock Bowers for an 88-yard touchdown up the right side. After catching a team-high six passes in the opener against Clemson, Bowers caught three more, for 107 yards and two touchdowns, against the Blazers (1-1).

Bennett added a 61-yard touchdown pass to redshirt freshman wideout Arian Smith early in the second quarter, making him 5-for-5 for 245 yards and four TDs in the game. Georgia’s final points of the first half came on yet another Bennett touchdown pass. Set up by a 33-yard punt return by junior Kearis Jackson, the Bulldogs started the drive at the UAB 17. On third down at the 9, Bennett again connected with Bowers for a score, putting the Bulldogs up 35-0 with 1:13 left in the half.

Senior running back James Cook put the Bulldogs up 42-0 with 8:42 to play in the third, scoring in a 14-yard run to the right. Midway through the period, quarterback Carson Beck hit fellow redshirt freshman Justin Robinson for a 12-yard score that made it 49-0 — the first career TD for them both.

Georgia’s offense ended up with 376 yards through the air and 163 on the ground. Meanwhile, the Bulldog defense followed up its stellar showing in the opener against Clemson by holding the Blazers to 174 yards and 1-for-11 on third down.

The Blazers got on the scoreboard, and scored the first touchdown the Bulldogs have allowed this season, with a 61-yard interception return for a touchdown in the third quarter.

At halftime, Georgia celebrated the 1980 national championship team, which was unable to get together for its 40th-anniversary celebration last season due to the coronavirus pandemic. Legendary coach Vince Dooley was out on the field with the stars and supporting characters alike, as well as much of that team’s coaching staff.

The Bulldogs return to Sanford Stadium next Saturday, Sept. 18, for their SEC opener against South Carolina. Kickoff is at 7 p.m. and the game will be broadcast on ESPN.

Quick Summary: Second-ranked Georgia built a 35-0 halftime lead thanks to a quick-strike offense led by senior QB Stetson Bennett (10-for-12, career-high 288 yards, 5 TDs, 0 INT) who tied a school record with five TD passes as the Bulldogs posted a 56-7 win. The defense blanked the Blazers, limiting them to 174 yards on 53 plays. The UAB TD came on a pick-six with 5:02 left in the contest. Through two games, Georgia’s opponents have been held to just 10 points, the lowest since 2003 when they had 10.

For the second straight week Georgia’s defense did not allow any points through the first three quarters after shutting out No. 3 Clemson in a 10-3 win in Charlotte. Today was the first time since 2019 that Georgia posted back-to-back first half shutouts, doing it against Missouri and at Auburn. Georgia would beat Missouri here 27-0 and the Tigers 21-14 on the Plains. At 35-0, Georgia posted its biggest halftime lead since a 42-7 advantage over Murray State in 2019. With Georgia up 49-0, the Blazers entered the fourth quarter with 146 yards of total offense on 46 plays.

Record-Setting First Half For Bennett: At the half, Georgia senior starting QB Stetson Bennett was 7-for-8 for 260 yards with a school-record tying and career-high 5 TD passes among his eight completions for a 35-0 lead. He completed his first five passes for 245 yards. Today’s TD passes by him covered 73, 12, 88, 61 and 9 yards. He tied the school record for TD passes in a game when he connected with freshman TE Brock Bowers (3-for-107, 2 TDs) for a nine-yarder.

He became the sixth Bulldog with five TD passes in a game, and the first to do it since Aaron Murray vs New Mexico State in 2011, also doing it in the first half. In the second half, Bennett led another TD drive, a 70-yarder on eight plays capped by a 14-yard run from James Cook to make it 42-0. Bennett’s first pass went for a 73-yard TD to sophomore Jermaine Burton for a 7-0 lead following the PAT. It was a career-long catch for Burton. Then, Bennett hit Bowers for an 88-yard TD, the ninth longest in school history and longest since a record 98-yarder in 2013 from Aaron Murray to Reggie Davis. The next time Georgia got the football, Bennett and sophomore Arian Smith connected on a 61-yard TD pass for a 28-0 lead. On Georgia’s second possession on a 3rd-and-4 from the UAB 12, Bennett completed a 12-yard TD pass to junior Kenny McIntosh for a 14-0 edge. RS-freshman Carson Beck connected with RS-freshman Justin Robinson for a 12-yard TD and a 49-0 lead, the first TDs for both.

Defensive Leaders & Another Pick Six: The leading tackler for the Bulldogs was senior Channing Tindall with seven. Georgia tallied three sacks. Senior Adam Anderson collected his second sack of the season and 11th for his career while sophomore Nazir Stackhouse notched the first of his career. Tindall picked up his first sack this year and now has 7.5 for his career, Georgia registered its 20th score on defense or special teams in the Kirby Smart era (since 2016) when freshman Jamon Dumas-Johnson scored from 20 yards on an INT in the fourth quarter. It was the sixth pick-six in the Smart era including second this season. There have been 17 TDs and three safeties. In games wIth a non-offensive score by Georgia, the Bulldogs are 17-1 under Smart.

Special Teams Summary: Senior punter Jake Camarda finished with a 49.7 average on three punts with a long of 60 yards and two inside the 20. Also, he had seven kickoffs with seven touchbacks. Junior Jack Podlesny was 8-for-8 on PATs, missed a 32-yard field goal and had two kickoffs for touchbacks.  Junior Kearis Jackson had two punt returns for 67 yards including a 33-yarder to the UAB 17 that led to the final TD of the first half.

Points Off Turnovers: Georgia got 14 points off three interceptions (Lewis Cine 7th career INT, pressure by Nazir Stackhouse; Kelee Ringo INT-first of his career; freshman Jamon Dumas-Johnson 20-yard INT for a TD, first of hiss career) while the Blazers scored seven points off one INT – a 61-yad pick six by Keondre Swoopes. The Bulldogs have two pick-sixes this year.

For Starters, Game Captains & Series History: Georgia had no first-time starters today. Senior QB Stetson Bennett made his sixth career start and first since last year against Florida. Georgia’s season-opening starting QB JT Daniels did not see action today. UAB won the toss and elected to defer the ball until the second half. Seniors Jamaree Salyer (OL), Christopher Smith (DB) and junior Zamir White (RB) were the captains. With today’s 56-7 win, Georgia now holds a 3-0 edge in the series history.