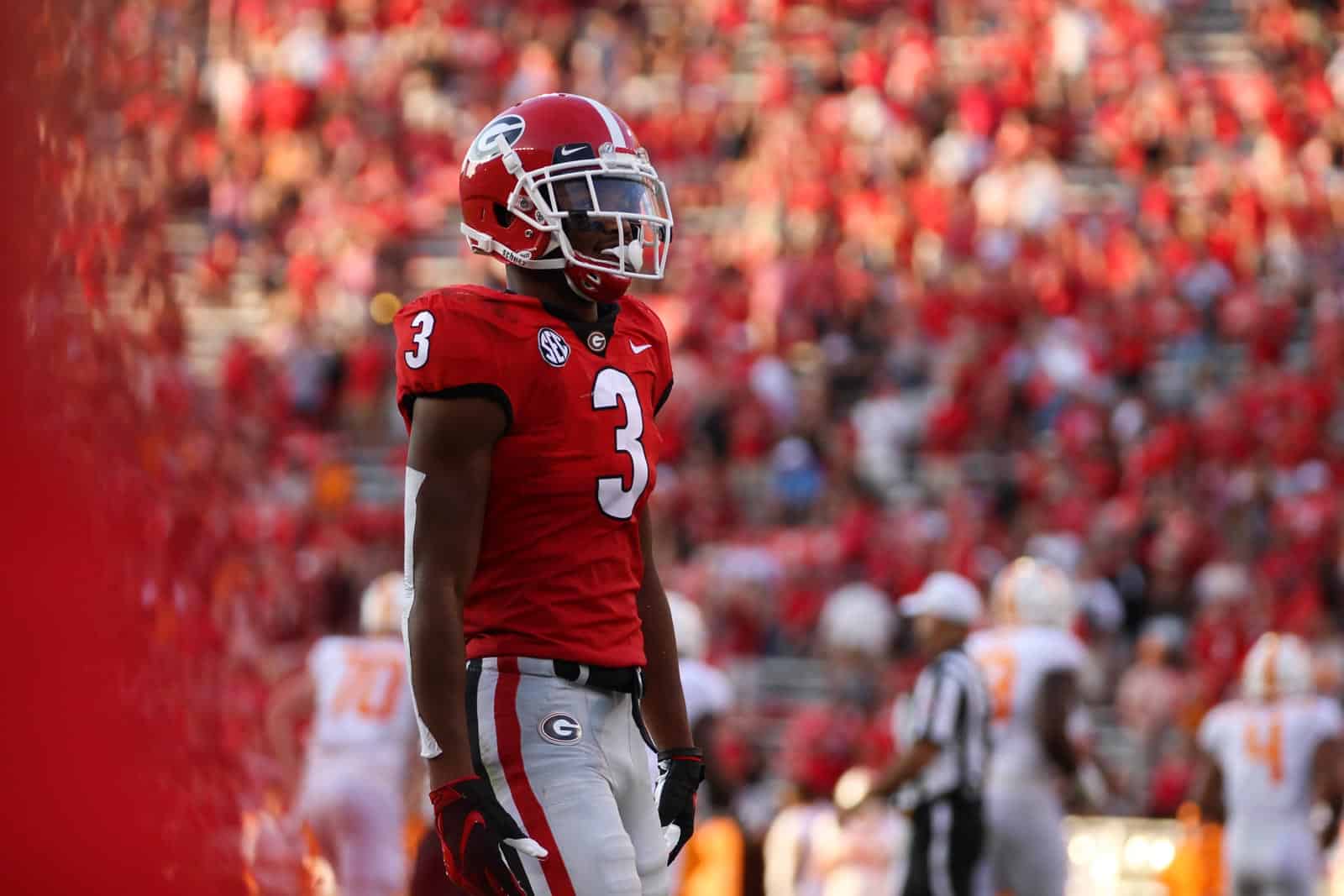 CLEVELAND – Five members of the University of Georgia football team were selected Friday evening on the second night of the 2021 NFL Draft.

Defensive back Tyson Campbell was chosen by the Jacksonville Jaguars with the 33rd-overall pick, the first selection of the evening, while linebacker Azeez Ojulari was selected by the New York Giants with the 50th-overall pick.

In the third round, linebacker Monty Rice was selected by the Tennessee Titans with the 92nd overall pick, quickly followed by offensive lineman Ben Cleveland, who was picked 94th overall by the Baltimore Ravens, and tight end Tre’ McKitty, who went 97th overall to the Los Angeles Chargers.

Through three rounds of the draft, a record six Bulldogs have been selected, joining defensive back Eric Stokes, who was picked 29th overall Thursday by the Green Bay Packers. The previous top mark was five players, set on five prior occasions: 2018, 2009, 2005, 2003, and 2001.

Campbell got the starting nod in 24 games since his true freshman season in 2018, including all 10 games in 2020. The Plantation, Florida native finished with 89 career tackles, 3.5 tackles for loss, three fumble recoveries to go along with one interception and a forced fumble. Campbell highlighted his first year by forcing and recovering a fumble at Missouri and taking it 64 yards for a touchdown. As a sophomore, Campbell recovered a fumbled punt in the end zone at Georgia Tech to help deliver the Bulldogs a 52-7 win in 2019.

Campbell is the first Georgia player to ever be selected with the opening pick of the second round, as well as the first Bulldog selected by the Jaguars since defensive tackle Marcus Stroud went 13th overall in 2001.

Ojulari started 23 games over the last two years after redshirting the 2018 campaign and completed his career on the All-SEC Second Team. The 2019 Freshman All-American finished with 67 tackles, including 14 sacks and 19.5 tackles for loss, to go with five forced fumbles and a fumble recovery over two seasons. Ojulari saved one of his most memorable performances for his finale in the 2021 Chick-fil-A Peach Bowl. The Marietta native finished with four tackles, including three sacks, and forced a pair of fumbles, one of which allowed Georgia to get a safety on the Bearcats on the game’s final play and sealed Defensive MVP honors.

Ojulari continues a recent trend of Bulldogs heading to the Big Apple, as the Giants have now selected five Georgia products in the last four years. In last year’s draft, offensive tackle Andrew Thomas, Ojulari’s college roommate, went fourth overall, while linebacker Tae Crowder was chosen with the final pick of the draft. The pair combined to start 21 games for New York, helping the Giants finish second in the NFC East.

Rice, a native of Huntsville, Alabama, appeared in 47 games over four seasons, starting in 28 at linebacker. The All-SEC First Team honoree ranked third on the team last season with 49 stops, concluding his career with 219. Rice was one of five finalists for the Butkus Award and was named to the Second Team All-America by The Athletic. During his senior season, his top performance came against Tennessee on Oct. 10, as he tallied eight tackles, including a sack, forced fumble, and 20-yard return touchdown on the same play. As a junior, he led the Bulldogs with 89 tackles, including a career-high 12 against South Carolina, 10 against Auburn, and a team-high nine against Florida. As a sophomore, he notched 11 tackles and forced a fumble in a win over the Gators.

With the choice of Rice, the Titans have picked a Georgia player in each of the past three drafts, following offensive tackle Isaiah Wilson in 2020 and linebacker D’Andre Walker in 2019. Additionally, Rice’s selection, combined with the picks of Stokes, Campbell, and Rice, marks the first time since 2013 that Georgia’s first four drafted players all came from the defensive side of the ball.

Cleveland, a native of Toccoa, Georgia, appeared in 45 games and started in 25 for the Bulldogs, including all nine regular-season contests in 2020. The All-SEC First Team right guard helped the Georgia rushing attack amass 2,008 yards during the season, including 332 against South Carolina on Nov. 28. Cleveland was named to the Second Team All-America by The Athletic and Associated Press Third Team, while also being a three-time SEC Offensive Lineman of the Week honoree. In addition to offense, he participated on the punt and placement kick units during his career. He was also a member of Coach Kirby Smart’s first spring roster after enrolling early in January 2016.

McKitty, a native of Wesley Chapel, Florida, started at tight end for the final seven games of the 2020 regular season. In his lone Georgia season, McKitty finished with six receptions for 108 yards, including a 40-yard touchdown catch against South Carolina on Nov. 28. Prior to joining the Bulldogs, he played in 35 games for Florida State, racking up 50 receptions for 520 yards and two touchdowns over three seasons. As a sophomore in 2018, his 26 catches for 256 yards ranked fourth amongst ACC tight ends.

McKitty’s selection breaks the program’s longest draft drought as he becomes the first Bulldog picked by the Chargers since wide receiver Gene Washington in 1977. The Tampa Bay Buccaneers now hold the mantle, with defensive back Jermaine Phillips going 157th overall in 2002.

The 2021 NFL Draft concludes Saturday with the final four rounds, beginning at noon with the opening of the fourth round.