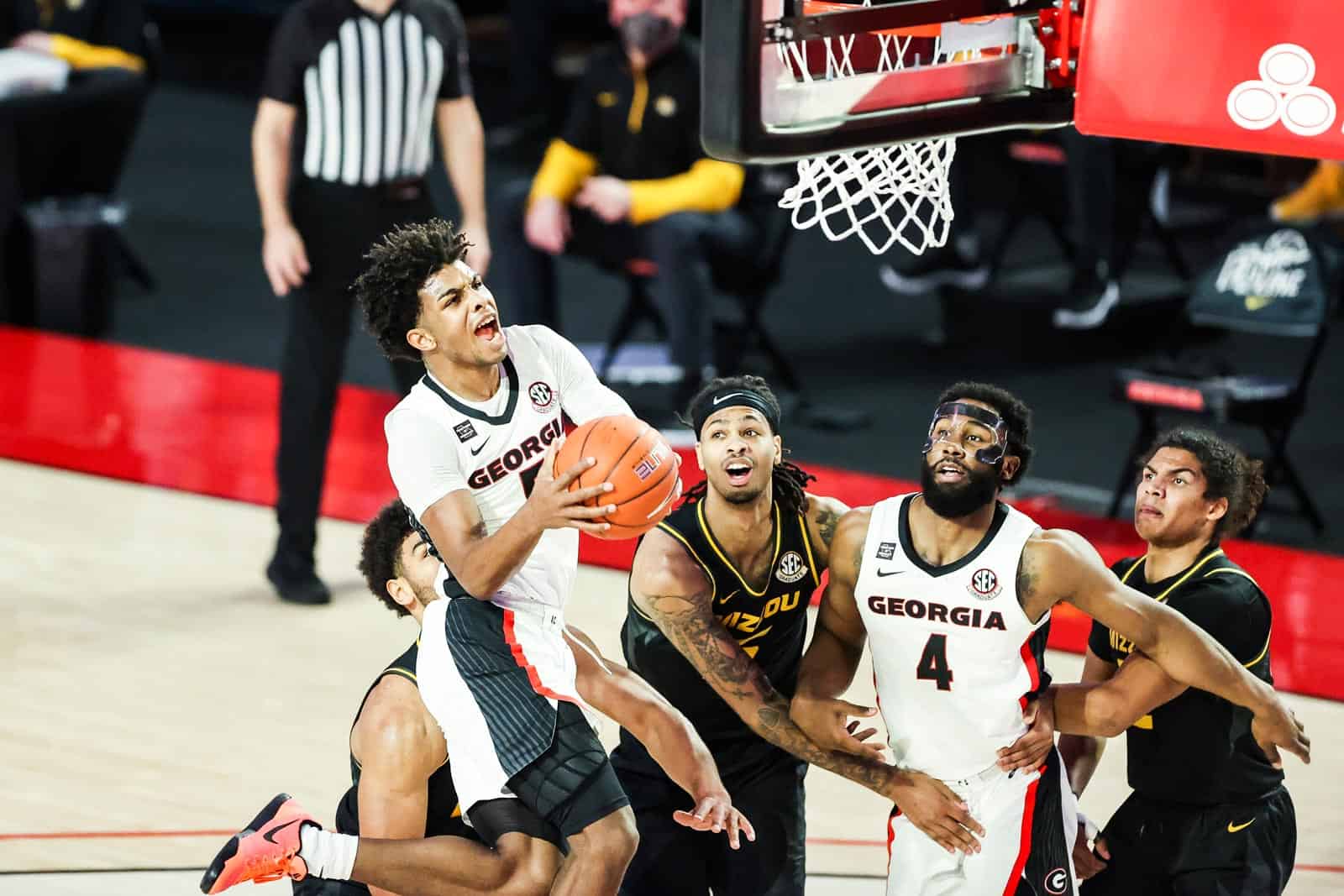 ATHENS, Ga. – Despite trailing by 13 in the second half, the University of Georgia men’s basketball team picked up its most impressive win of the season, topping No. 20 Missouri, 80-70, Tuesday evening before 1,638 fans at Stegeman Coliseum.

Graduate Justin Kier led Georgia (13-8, 6-8 SEC) with 16 points on 6-for-7 shooting, one of five Bulldogs in double-figures. Sophomore Toumani Camara tallied 15 points and a team-high eight rebounds, with graduate Andrew Garcia pitching in with 13 points. Sophomore Sahvir Wheeler posted 12 points and six assists, while freshman K.D. Johnson scored 10 points and notched four steals. Overall, the Bulldogs shot 49.1 percent from the field, including a 54.2 clip in the second half.

“I think the way we came back and got the momentum, the fact that we did it against such a good team, the fact that some guys were really on the attack, like Justin, K.D., Sahvir, Andrew, those things can only hopefully help us,” said head coach Tom Crean following the game.

Both teams opened the game strong offensively, with Wheeler and Kier powering the Georgia attack in the early going. Kier continued to pick up buckets for the Bulldogs, quickly reaching double-figures in scoring and helping them take a five-point lead by the second media break. Using a 11-0 run, Missouri (13-6, 6-6 SEC) gradually worked its way back into the lead with seven minutes remaining in the half.

The Tigers continued to extend their advantage as the Bulldogs went over five minutes without a field goal, with Horne finally breaking the streak. Each team struggled to score in the closing moments of the first, with the exception of Garcia, who scored six unanswered to put Georgia back in front. The lead was short-lived, however, as a late 3-pointer gave Missouri a 37-33 lead at intermission.

Missouri continued to stretch its lead in the second half, building a 13-point margin in the process by the first media timeout. Georgia attempted to get back into the contest at the foul line, quickly moving into the bonus and narrowing the gap to two on a 3-pointer from sophomore Jaxon Etter. The Bulldogs went on to knot the game at 53 as Johnson picked up a steal and drove for a fast break lay-in.

Georgia eventually regained the lead with consecutive triples from Horne and Kier, capping off a 21-5 comeback sequence. While Missouri was able to again tie the game, Camara helped keep the Bulldogs ahead with a dunk and a crucial three-point play following up on a missed free throw. Holding a narrow lead in the final minutes, Georgia stayed in front for good with timely steals and solid shooting from the charity stripe, sealing a season-defining win in the process.

“We needed to change momentum,” said Crean about the small lineup used during the comeback. “It wasn’t about positions as much then as it was about energy and toughness and movement. Anytime we have Jaxon and K.D. in there, they bring an energy level and a competitiveness level that I think helps the guys. It was a makeshift lineup, not based on who’s guarding who, but who’s going to fight, compete, get on that glass, and in Jaxon’s case, the way he steps up and draws charges. Those are really, really important things.”

Georgia returns to the road this weekend for a matchup against rival Florida (10-6, 6-5) on Saturday, Feb. 20 at Exactech Arena at the Stephen C. O’Connell Center in Gainesville, Florida. The meeting with the Gators is set for a 3:30 tip time and will be broadcast on SEC Network.

• WIth tonight’s win, Georgia evens the all-time series with Missouri at 8-8. The Bulldogs are now 5-2 against the Tigers in Athens.

• Sophomore Sahvir Wheeler bagged a double-figure total (12 points) for the 18th time this season and 29th in his career.

• Graduate transfer Justin Kier had a double-digit output (16 points) for the ninth time this season and 60th in his career.

• Sophomore Toumani Camara captured a double-figure scoring total (15 points) for the 17th time this season and the 25th in his career.

• Graduate transfer Andrew Garcia clinched a double-figure total (13 points) for the 10th time this season and 50th time in his career.

• Johnson pocketed his new career high in assists on the hardwood tonight with three.

• The Bulldogs were hot off the bench with 40 percentage total points coming from nonstarters. UGA: 32 / MU: 11.

• Georgia showed their newfound consistency with their improved field goal percentage in tonight’s contest making 26 of their 53 shots from floor. UGA: 49% / MU: 43%

On the lineup used during the second half run…

“We needed to change momentum. It wasn’t about positions as much then as it was about energy and toughness and movement. Anytime we have Jaxon [Etter] and K.D.
[Johnson] in there, they bring an energy level and a competitiveness level that I think helps the guys. It was a makeshift lineup, not based on who’s guarding who, but who’s
going to fight, compete, get on that glass, and in Jaxon’s case, the way he steps up and draws charges. Those are really, really important things. And so, we played basically
played about eight guys in that span and were able to figure it out. After the timeout we took, I thought they regrouped, they changed, and then, we started to have some
success against them.”

On gaining confidence against future deficits…

“We’ve come from behind before, but this is a really, really good team that’s ranked for a reason. I think to be able to come back like that—it wasn’t like they were sabotaging.
They’re experienced, they’re playing hard. They weren’t self-inflicting their own wounds. They were really going, so we had to earn it. I think that was really, really important
that we kept that pressure on them. They’re good, they’re really good. I know they’re missing [Jeremiah] Tilmon, but they’re even faster when he’s not in there. Cuonzo’s
[Martin] a heck of a coach. I think the way we came back and got the momentum, the fact that we did it against such a good team, the fact that some guys were really on the
attack, like Justin [Kier], K.D. [Johnson], Sahvir [Wheeler], Andrew [Garcia], those things can only hopefully help us because we’re fully aware of how good Florida is as we go in there on Saturday.”

On the poise shown by his team tonight…

“Well, they were locked in. Again, the game Saturday, they just have to be reminded that we just won three in a row. We had just won 5-7. We came back against Tennessee.
We didn’t play very well at the beginning. It was a 14-point game, and I reminded them of this in a timeout when it was 13. We missed a three that we shouldn’t have taken.
We were in the bonus. We were in the bonus tonight at the 13:07 mark of the second half because we knew that was going to be a key part of the game, so let’s make sure we
stay with that. It wasn’t about taking the jump shot. It wasn’t about making a move. It was about getting to the rim. We had just been in this position the other day. We missed
two shots and had a turnover. They scored three straight times. That’s where the margin for error is not very high for us, so we needed to make sure that we were good and
solid. If we were going to come back, we couldn’t be beating ourselves while we were coming back. We had to trust what was happening and get ourselves into that bonus. I
think we may have been at two or three team fouls at that point. That’s the recipe for us because now we can set our defense, and it helps keep them out of transition.”

On what spurred the team on during their run tonight…

“It’s something that Coach [Crean] said a lot, ‘The more desperate team would probably win the game.’ We’re coming off of two losses and they’re coming off of two losses, we
just needed to stay true to ourselves. They played a great game, but I feel like we just really connected on the court and everybody was playing their part. The ball was moving
like it needed to, and it was just a great game for us.”

“It’s really important, especially in the crunch time when the other team fouls and you are able to get to the free-throw line. It’s something that coach said a lot, to attack the rim and get them in foul trouble and force that advantage for as soon as there is a foul, to be able to get to the free throw line. It’s definitely one of the goals that we need to keep
on doing, to keep attacking first once they’re in foul trouble. That’s how shots get open anyways, so we just need to stay aggressive and make sure we attack every time.”

On the second half comeback…

“We just miscommunicated on some crucial possessions in the beginning of the second half, so that kind of dug us deep. We knew we could fix those mistakes. We knew we
were going to have great defensive stops if we could fix those mistakes, so that’s what we really locked in on and tried not to settle offensively and get them to move and foul.
We made some critical mistakes in the first of the second half, so we locked in on that and we continued to get stops.”

“It is the best feeling in the world when a coach believes in you and has the all-time high confidence in you. It’s more mental than anything, that’s how tough this league is.
That’s how great this league is. Every single night the different scouting and how they play is the difference. It’s a slump I try not to get too down on and give into too much.
I come out and do the same routines I do before games and practice and not try to change anything and be consistent in what I do. I know things are going to work out and
when I play bad, other guys step up. I try not to play bad every single game, I try to stay defensively into it no matter how it is going offensively. Tonight, we really tried to go out
there and attack. I’m proud of this team for sure.”

On the turning point in the game…

“I just felt the spirit in the room. We met with a kid after the game today. I know you guys know his name is Taedan [Johnson]. I got to see him before the game, most of the
guys didn’t. I won’t get into what is going on, but that is a great kid, and he definitely upped our spirit today even though we didn’t know he was there—we just felt that energy
in the room and on top of that, just locking in defensively. Being down 13, you can’t give up easy buckets and you can’t foul, so we continued to lock in on defense and convert
on those different stops and turnovers, and it worked for ud—I think we can continue to do that going forward. If we played great defense, I think that helps our defense even
more. And, the fans showed great love as well, they always do.”