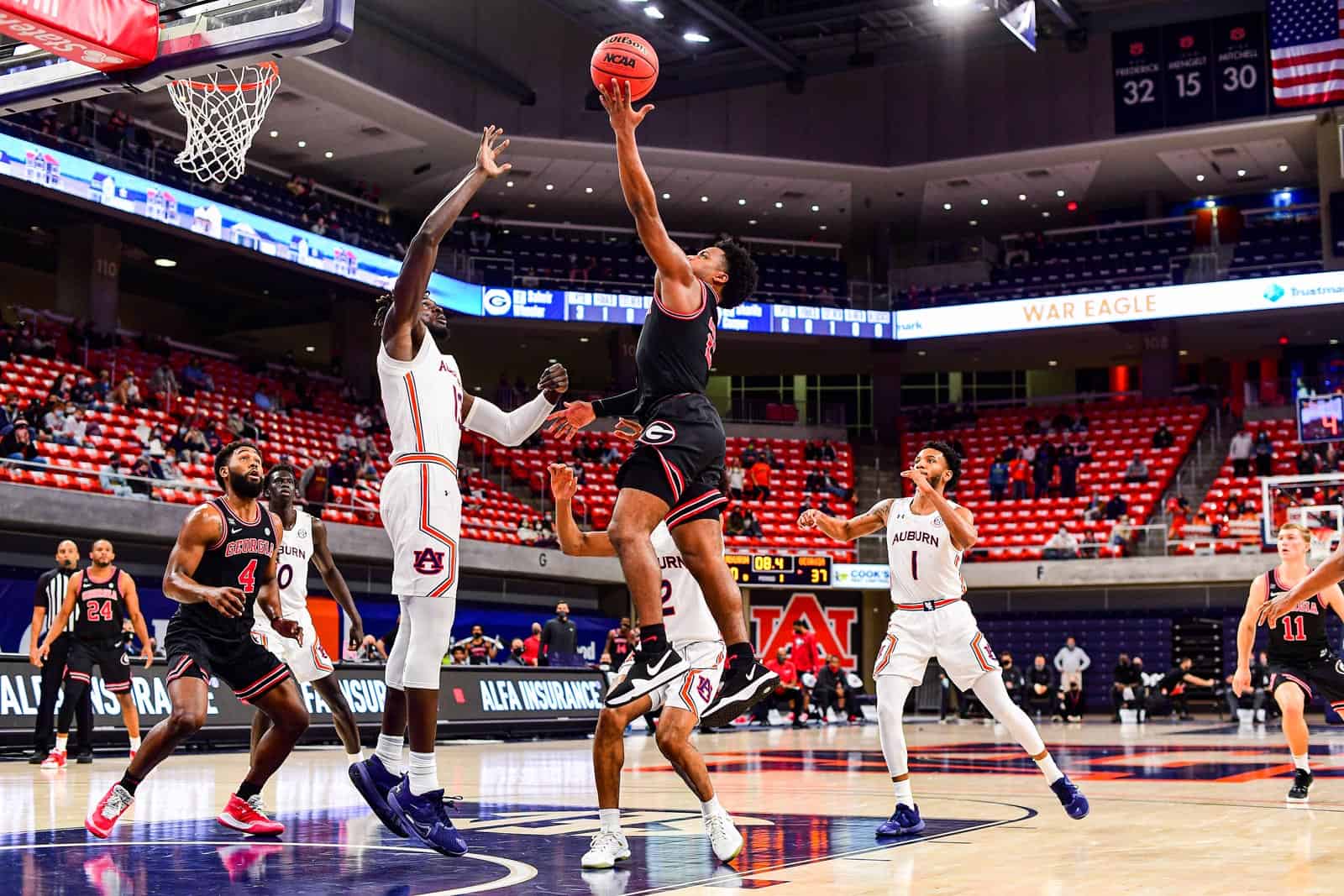 AUBURN, Ala. – With a season-high 52 points in the second half, the University of Georgia men’s basketball team outlasted Auburn, 91-86, Tuesday evening before 1,824 fans at Auburn Arena.

Junior Tye Fagan led Georgia with 16 points on 7-for-10 shooting with six rebounds, one of six Bulldogs in double-figures on the night. Sophomore Toumani Camara posted his fifth double-double of the season with 15 points and 12 boards, while fellow sophomore Sahvir Wheeler tallied 13 points and seven assists. Graduates P.J. Horne and Justin Kier scored 13 and 11 points, respectively, with freshman K.D. Johnson pitching in 12.

“They believed they were going to win. I know that sounds clichéd, but they came in believing that they would win,” said head coach Tom Crean following the win. “We were very focused. We had very good energy. They were very locked in, and I think it showed in the way we played.”

Georgia opened the game with a burst, quickly jumping out to a 10-2 lead thanks to seven-straight points from Fagan. After Auburn narrowed the margin to four, the Bulldogs responded with a transition 3-pointer from Johnson, maintaining an eight-point advantage through the under-12 timeout. While pushing the lead to 10 midway through the half, the Bulldogs allowed the Tigers to gain ground with an 8-2 run.

After Horne broke a three-minute drought with a layup, Georgia continued to rebuild its lead with a Camara triple with four minutes remaining. Wheeler later pitched in with a 3-pointer of his own, followed up by a driving layup in the final seconds to give Georgia a 39-30 lead at intermission.

Both teams came out firing to open the second half, with 17 combined points scored in the opening two minutes of the period. The torrid pace continued as Fagan notched nine of 11 Georgia points at one stretch, while Auburn countered with four 3-pointers to make the score 57-52 by the first media break. After the Tigers narrowed the deficit to three, the Bulldogs rattled off a 14-2 run to extend their lead, culminating in a wide-open three from Horne.

Spurred by junior guard Jamal Johnson, Auburn responded with seven unanswered points, but the run was cut off by a Wheeler layup, keeping the margin at 10 at the under-8 timeout. The Tigers continued to cut the deficit following the break, but a thunderous slam dunk from Horne curbed the momentum.

With two minutes to play, Camara helped the Bulldogs stay ahead for good with a contested put back. Despite Auburn’s tough press in the closing moments, Georgia managed to clinch the game at the line.

“It was as detailed of a game as we have played in what we wanted to do in coverage, what we wanted to do with (Auburn freshman guard) Sharife Cooper,” said Crean. “(Auburn) played well, they got to the rim, he draws fouls. We made some mistakes. It wasn’t a perfect game by any stretch of the imagination. But we believed we were going to win, and we followed through to make that belief happen by executing the game plan in a very good way.”

Georgia returns home for a matchup against Vanderbilt (5-8, 1-6 SEC) on Saturday, Feb. 6 at Stegeman Coliseum. The meeting with the Commodores is set for a 1 p.m. tip time and will be broadcast on SEC Network.