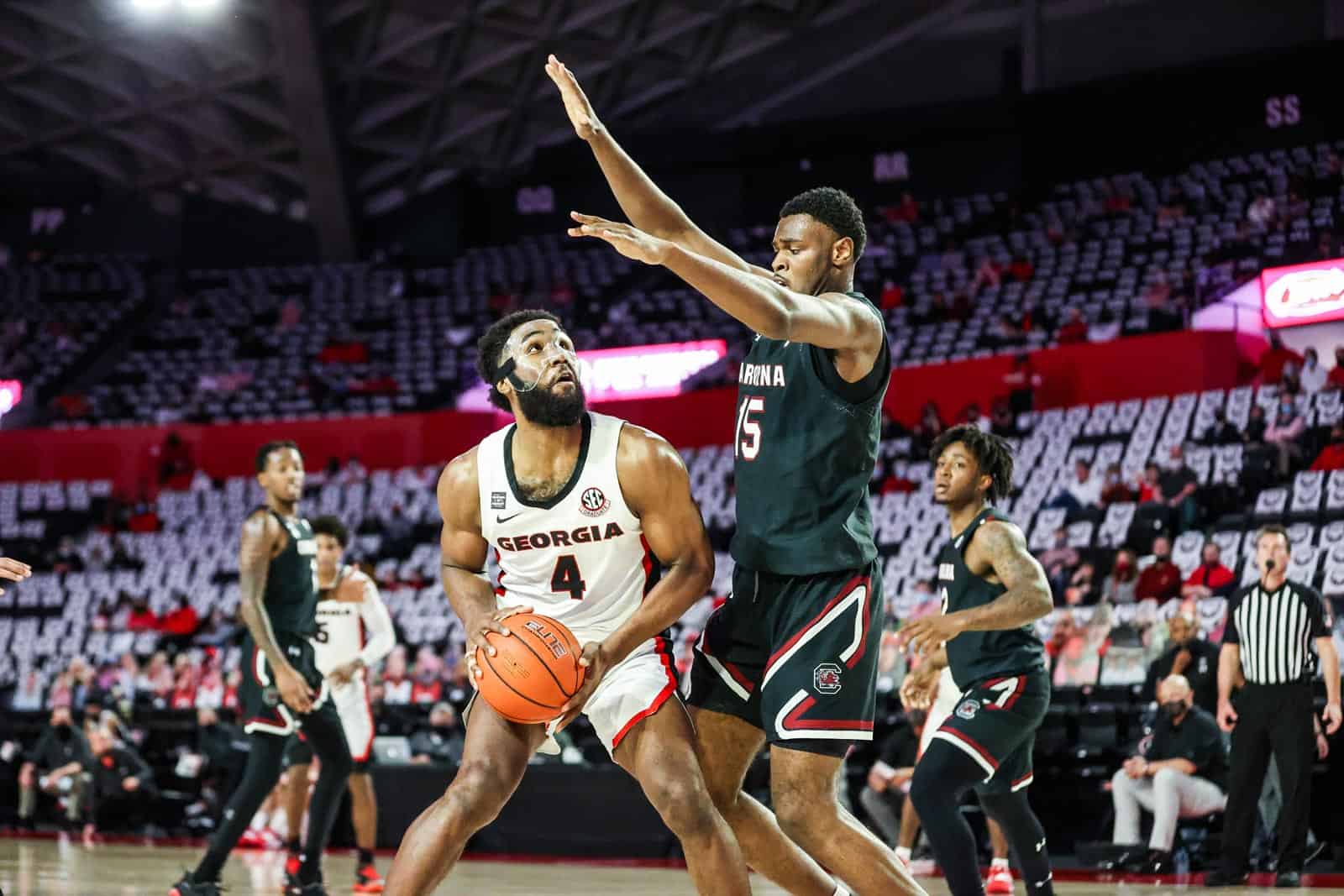 Graduate P.J. Horne led Georgia (14-10, 7-10) in scoring with 17 points, including a 4-for-7 performance from beyond the arc. Fellow graduate Justin Kier tallied 16 points on 5-for-6 shooting with seven rebounds, while graduate Andrew Garcia and sophomore Toumani Camara each pitched in 10 points. Camara nearly earned a double-double with a team-leading nine rebounds. Overall, the Bulldogs shot 36.7 percent for the game.

“I would say it starts with me, to be honest with you,” said head coach Tom Crean following the game. “They wanted to fight, and we didn’t, so I did a poor job of having our guys completely understand what this game was going to entail because we never locked into the fight.”

South Carolina (6-12, 4-10) used the inside game to quickly post an early 10-2 lead, but Georgia soon tied the score thanks to a pair of Kier 3-pointers. As the midpoint of the first half approached, both teams remained within three points of each other, with the Bulldogs finding success in transition. The Gamecocks then took advantage of a six-minute Bulldog scoring drought with 13 unanswered points, building a 28-17 lead by the six-minute mark.

Horne finally broke the dry spell with a triple, but the Gamecocks continued to extend their lead with sophomore guard Jermaine Cousinard dropping 10 consecutive points. The final two minutes of the half turned into a back-and-forth affair, with Georgia countering Cousinard on the fast break. On the final possession, sophomore Sahvir Wheeler’s driving attempt rimmed out and the Bulldogs headed to the locker room trailing, 41-29.

Georgia’s second half opened with a bang as Horne connected on a pair of threes, cutting the South Carolina lead to six. Trailing by 10, Garcia singlehandedly put the Bulldogs back in the game with six straight points, reaching the 1,000-point mark for his career during the run. However, as they had before, the Gamecocks parlayed their solid shooting into a 14-point lead at the halfway point.

The South Carolina lead eventually grew to 23 points as the Gamecocks connected on six of seven field goal attempts during one stretch. The Bulldogs made matters worse for themselves with eight turnovers in the second half, keeping them squarely behind for the remainder of the contest.

Georgia remains home next weekend for its regular season finale against No. 6 Alabama (18-6, 13-2 SEC) on Saturday, March 6 at Stegeman Coliseum. The meeting with the Crimson Tide is set for a 2 p.m. tip time and will be broadcast on CBS.

• Graduate transfer Andrew Garcia shined on Senior Night joining the 1,000 total career point club with a scoring output of 10 in tonight’s game to get him to 1,002 total career
points. Garcia tallied 784 points at Stony Brook and he added 218 points this season as a Bulldog.

• In the process of his 1,000 milestone Garcia reached the double-figures for the 11th time this season and the 51st in his career.

• Sophomore Sahvir Wheeler who is hot off his historic triple-double game added another notable mark to his resume. Wheeler surpassed Pertha Robinson’s school record for the most assists in a single season by bagging five assists in today’s matchup. Wheeler now has a total of 170 assists in the 2020-21 season for the UGA record.

• Eight different Bulldogs have had a scoring output in the double-digits during the 2020-21 season, combining to produce 94 double-digit performances in UGA’s 24 games. Four different Georgia players posted a double-figure game today.

• Graduate transfer P.J. Horne snatched a double-figure game for the 11th time this season and for the 25th of his career. Horne is solidifying his place in Georgia history by leading the team with 3-point shots made this season with a total of 42. Horne made a total of four 3-point shots in today’s game.

• Graduate transfer Justin Kier secured a double-digit output for the 10th time this season and the 61st of his career.

• Sophomore Toumani Camara amassed a double-figure game for the 19th time this season and 27th in his career.

• The Georgia Bulldogs have the advantage in games played in Athens against the South Carolina Gamecocks 33-21. However, South Carolina has a slight leading the all-time
series between the SEC rivals, 60-58.

On today’s game against South Carolina…

“I would say it starts with me, to be honest with you. They wanted to fight and we didn’t, so I did a poor job of having our guys completely 100 percent understand what this game was going to entail because we never locked into the fight. They were aggressive, they started in zone. In all honesty, when nobody plays well, when nobody leads their teammates, and when nobody’s really willing to go through a cut, get hit, go up strong through the contact, that falls back on me. It really does. I’ve got to do a way better job, put the blinders on. It wasn’t because of practice, it wasn’t because of preparation, it wasn’t because of fatigue. But when no one’s in the fight, that falls back to the head coach, and that’s where I’m at.”

On if South Carolina is a poor matchup…

“It could be because we haven’t had success with them. They brought their best. Trae Hannibal, they left home from Mississippi State, and today he comes in, he pushed the right buttons with his team. There’s probably some truth to that. That doesn’t have anything to do with not cutting and standing, and not cutting through the lane and taking the hit and going through it. That’s how we play, and we didn’t do that today. We did not cut and move the team the way we needed to move it, and our passing was not maybe one or two dribbles too late occasionally. It was one or two dribbles late a lot, and so, the movement just wasn’t there. When you see we’re not getting that, that’s when we have to try to go inside even more. There were times where we didn’t finish—I’m not sure how many layups we missed. Like I said, I did a poor job of them understanding how a level of fight and toughness was going to be needed in this. We’ve been pretty good with this, as of late, but we weren’t today.”

“The ball didn’t move well enough tonight, and we didn’t have enough cutting. A lot of times, when you don’t want to go through the fight you settle for jump shots, and that’s some of what we did tonight. Our spirit got zapped early on. Our immaturity came out, to be honest with you, with the officiating, we have to be beyond that, but aren’t, so like I said, I did a poor job because we aren’t beyond not getting frustrated about lack of calls or physical play, and we didn’t cut through it and embrace the contact that goes into this. That’s kind of what the day was like for us.”

“We came to play, but we didn’t play hard enough. We need to come together collectively to try and get the next one.”

On the inconsistency from game to game…

“Our energy level in the games we win really never drops. We always stay collected, and I feel like tonight we got out-toughed, they out-toughed us tonight and it got us quiet. We need to know how to fight through adversity better and get to the next play.”

“I don’t know about that; I just feel like we didn’t come to play today. We came and were out there, but we didn’t try to the best of our ability to win that game.”

On what the issue was offensively today…

On being a bad match-up with South Carolina…

“I don’t believe we played very well today. I think we have somethings to fix—me included. I think they are a great team and executed their game plan well and we ended a foot behind today, and that is what the result was too.”

“We got to step up. He’s going to have the ball in his hands, so if he’s not playing very well then, we have to step up—especially on the defensive end. We can’t let officiating and missed shots affect your defensive performance. I think as a group we did that tonight; no one can control the officials, so we have to let them do their job and just play hard and come out and do what we can do. I think everyone has to step up. Even if he is shooting bad, he is still a part of the game, so we have to continue to grow in that area.

On how the defensive struggle effected offensive performance…

“I think it did. I think it controlled our offensive performance and it hurt us on defense—rotations and being a step to late. That’s something you can’t do against a great team. You do that against a great team, you get beat. We are going to have to get better this week. We have to get better for Alabama because we all know what they can bring. We played poorly on defense and that is not something we want. We have to get in the gym and [have] to become a better team and become closer for this next win.”