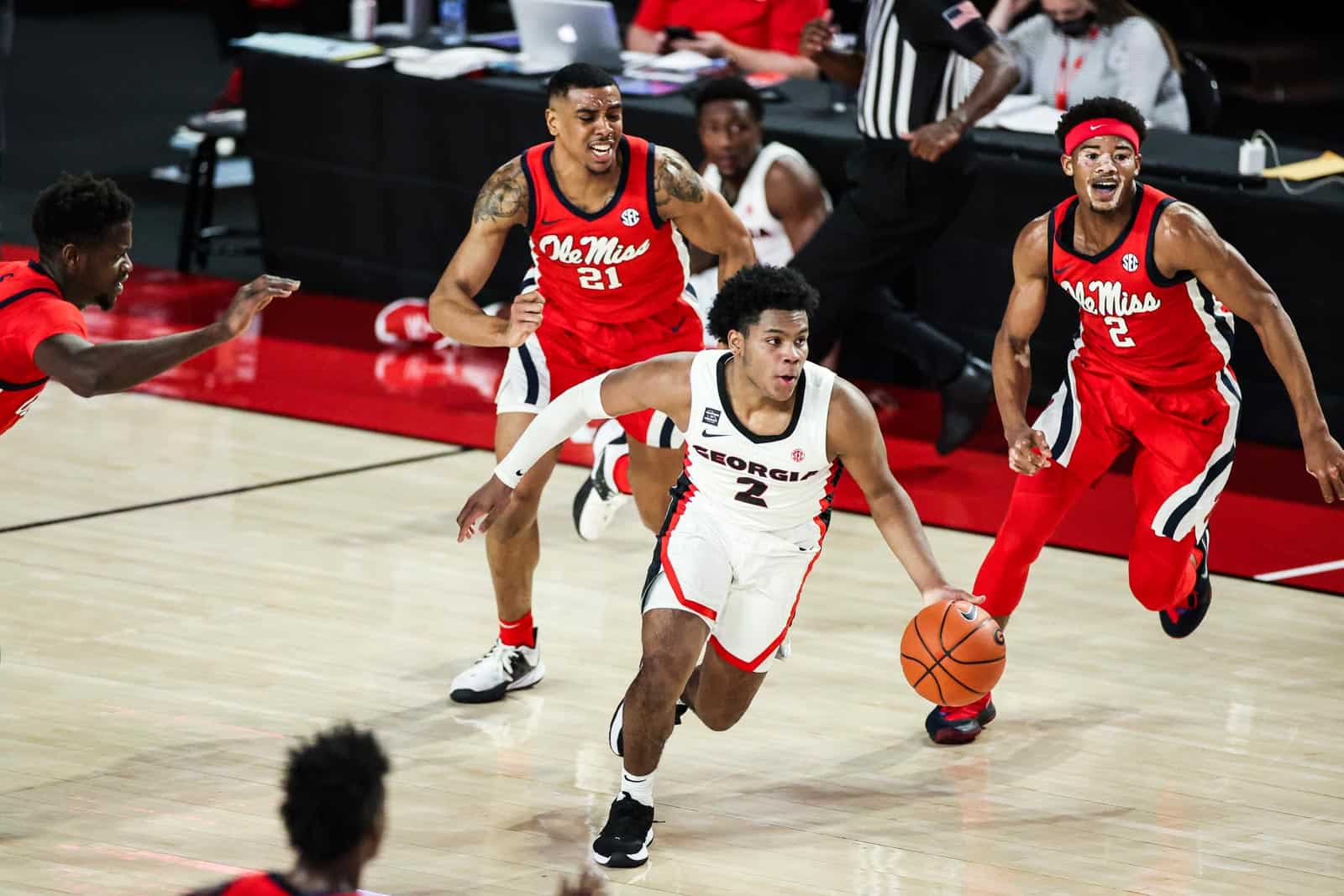 Sophomore Sahvir Wheeler and junior Tye Fagan led the Bulldogs in scoring with 13 points apiece, with Wheeler tallying a team-high five assists. Graduate Andrew Garcia pitched in with 11 points, while sophomore Toumani Camara notched 10 points and led the team in boards with eight. For the night, Georgia shot 55.3 percent from the field, including 50 percent on 3-pointers.

“I think the fact that they shot 36 percent and 15 percent from the field, that might be the story of the game as far as how our defense played. I hope nobody misses that,” said head coach Tom Crean following the game. “That’s impressive because that’s hard to come by. The last time we defended the field that well was Kentucky. Bottom line, we did make some threes, we had good ball movement, we had 16 assists. For what we didn’t get in second-chance points and what we left on the table at the free throw line, we needed those threes.”

The contest opened with a torrid scoring pace as both teams quickly racked up baskets, including a corner 3-pointer from graduate Justin Kier. Georgia continued to find success inside with a series of layups, maintaining a six-point cushion midway through the half while benefitting from an Ole Miss scoring drought. The Rebels responded with a 7-0 run that narrowed the margin down to two with under six minutes to play in the period.

With the score tightening, Wheeler helped keep the Bulldogs in front with the fourth triple of the half, but the Rebels continued their comeback, eventually retaking the lead at 32-31 with 1:56 remaining in the half. Graduate P.J. Horne and Camara answered with consecutive 3-pointers, sending the Bulldogs to the locker room with a 37-34 halftime lead.

Georgia’s success from beyond the arc continued in the opening minutes of the second half, with Fagan and Wheeler each dropping a triple. The Bulldogs soon made their way into the bonus and opened up an eight-point advantage, but Ole Miss again closed the gap with five unanswered points.

Later, with the Rebels now within three, Kier responded with a critical jumper to beat the shot clock, spurring a 6-0 run that put Georgia up nine at the under-8 timeout. The burst continued with a Horne 3-pointer, building a game-high 12-point lead for the Bulldogs with six minutes to play. Ole Miss attempted to make one final surge, coming within seven at one point, but a jumper from Fagan at the 2:58 mark clinched the contest for Georgia.

Georgia returns to the road for its second matchup of the season against Auburn (10-8, 4-5 SEC) on Wednesday, Feb. 2 at Auburn Arena. The meeting with the Tigers is set for a 7 p.m. tip time and will be broadcast on SEC Network.

• Georgia is 76-45 all-time versus Ole Miss, including a 42-14 advantage in Athens. The Bulldogs now have won the last three matchups against the Rebels.

• Eight different Bulldogs have scored in the double-figures during the 2020-21 season , combining to produce 62 double-digit performances in UGA’s 16 games and four Bulldogs had a double-digit scoring-output in tonight’s game.

• Sophomore Sahvir Wheeler notched a double-digit performance with 13 points for the 13th time this season and the 24th in his career. Wheeler entered the game at 18th overall in the SEC for scoring with 38 field goals, seven three-point shots, 24 free throws, and averages 13.4 points per game.

• Sophomore Toumani Camara posted a double-figure game with 10 points for the 12th time this season and the 20th in his career.

• Graduate transfer Andrew Garcia posted a double-digit performance with an output of 11. This is Garcia’s ninth double-figure tally of the season and 49th of his career.

• Junior Tye Fagan chalked up a double-digit game for the seventh time this season and the 10th time in his career with a tally of 13 points.

• Coming into this game Georgia ranked first in assists in the SEC. The Bulldogs had a total of 232 assists and an average of 15.5 per game. Tonight The Red & Black won the assists competition against Mississippi. UGA: 16 / UM: 6.

On their offensive ball movement…

“I do not think it is that simple—I think they really came in locked in on the guard, they really did. We were aggressive. I thought the job Sahvir [Wheeler] did on Devonte
Schuler was incredible, I mean it really was—to play 38 minutes and guard like that, is a tough matchup. Schuler can score at the rim and can score at the pull-up, he can step
back, he just pounds the ball so hard, so you are not going to steal it from him, and he gets by you. He did an excellent job with that. I think to hold them to the threes and to
challenge them to the shots that we did, I think gave our offense confidence tonight. Certainly, some threes early like Justin [Kier], Tye [Fagan], and things of that nature—Sahvir’s three. No question that helps, but it was not like we made 20 threes. It was not like we were Alabama, and we made 20 threes. We missed some too, so we got to keep
coming. I thought they did a good job of that tonight. I am really proud of their effort.”

“Yeah, free-throws, we can control the free-throws. We can get better there. There is no question that they had too many points, too many second-chance points. I think the
fact that they shot 36-percent and 15-percent from the field that might be the story of the game as far as how our defense played. I hope nobody misses that. That is impressive
because that is hard to come by. The only other time we defended the three that well was the Kentucky game. But the bottom line is that we did make some threes. We did have some good ball movement, we had 16 assists. For what we did not get in second-chance points and what we left on the table at the free-throw line—we needed those three’s, but we also needed one-shot stops to get ourselves going off the break.”

On winning a game with turnovers…

“I really don’t know Marc [Weiszer]. We won tonight, so I really don’t know to be honest with you. That’s a hypothetical, can we win games with 19 turnovers. We have, but I
really don’t have a good answer to that. You know what I’m going to do? I’m going to focus on the fact that we got a win tonight, and we’ll fix all that stuff when we get in the
film room and when we get back in practice. I don’t think anyone is trying to turn it over 19 times, but we were able to overcome that and win the game.”

On how the good three-point shooting night helped the team…

“When we shoot the ball pretty well, a lot of things open up for us including our driving. When you make a three and you see the bench go crazy, you get a certain jolt of energy
and you get the motivation to get that stop on the other end to come down and score again. That can build our run and build our team energy. We shot good threes, it was our ball reversals, our offensive rebounds, our inside out threes. We were sharing it and tonight was one of those nights where we got it going, we made 50-percent, I believe.”

“I honestly don’t know. Everyone felt good; I think I was kind of psyching myself out towards the end because I was realizing that I had missed four in a row. We got the win,
so I’m going to wipe it off and get back to shooting some more free throws in practice and make sure everything is in line. It was a great team win, and even though we didn’t
make free throws, we made up for it by making three-pointers and sharing the ball by getting everyone involved and playing a happy brand of basketball.”

On why this team does so well offensively against Ole Miss…

“Someone told me not too long ago that we’re a really good zone team, we’re better against the zone than the man. I think part of that is because of how we attack the zone, we kind of attack it unorthodox by having a guy sealing the man in the middle and playing out of him. Tye Fagan is a great layup maker and a great playmaker for us. He’s unselfish, and he can also make highly difficult layups so having him there and using him there to make plays for other people is really good for us. We stayed patient, we took good shots, every game is going to have a couple of quick shots but for the most part, we stayed patient and we listened to coach. We encouraged each other to knock down shots, and we got easy layups when we needed them.”

On reacting from the tough loss at South Carolina…

“It was pretty quiet on the bus ride back. I think we try to take positives from those types of games like on the first 18 possessions against South Carolina, we got 15 stops. It’s on us on the offensive end to convert and score on those so that maybe it’s not a 15-9 game, but instead a 25-9 or a 27-14. We knew that we were right there, and I think that it’s just one little run against South Carolina that got us down. We’re a few steps away from preventing those runs, and when teams do go on those runs, keeping our composure, knowing that these are great teams, and we have to counterpunch with our own run. I think Ole Miss tried to make a run today toward the end of the game, and we really forced them to take contested shots, and we rebounded the ball well at the end as we got stops.”

“It is something we had to do since they began to make a run. So, we had to come back and regroup. Coach told us to stay positive, to make sure our head was in the right state of mind. Regroup as a team and do each other’s job. That was the most important part and something we should have done the whole game. We need to respond faster. I feel like we did a good job at that today.”

“Yeah, they are very good at that—something I need to give them credit on. I think all five of their players, defensively, went to rebound. Even on offense. Even if you box your man it can be hard sometimes. They are more athletic than some guy or the position is just something they are good at. They go hard every time. I think it’s something that we can learn from and pick up from them, and try to have the same energy since we are a very small team and be able to go in there hard no matter the size.”

On turnover trouble with the team…

“It’s definitely a goal to cut them down. We are not trying to have an average of 20 turnovers a game. It’s something we need to focus on more. Just be more patient. I don’t believe it is because of pace, I think it sometimes we are just rushing or trying to make plays that aren’t there or maybe it is there and it’s just not the right time in the game to do that, so we just need to be smarter. I don’t think it’s something that defines us.”

“I have a lot of trouble with that. I feel like I was being too aggressive sometimes at some moments where there was no reason to. So, I just need to be smarter and understand
that. Just be in a mindset of containing and not trying to make a play out of positions and stay low on my legs.