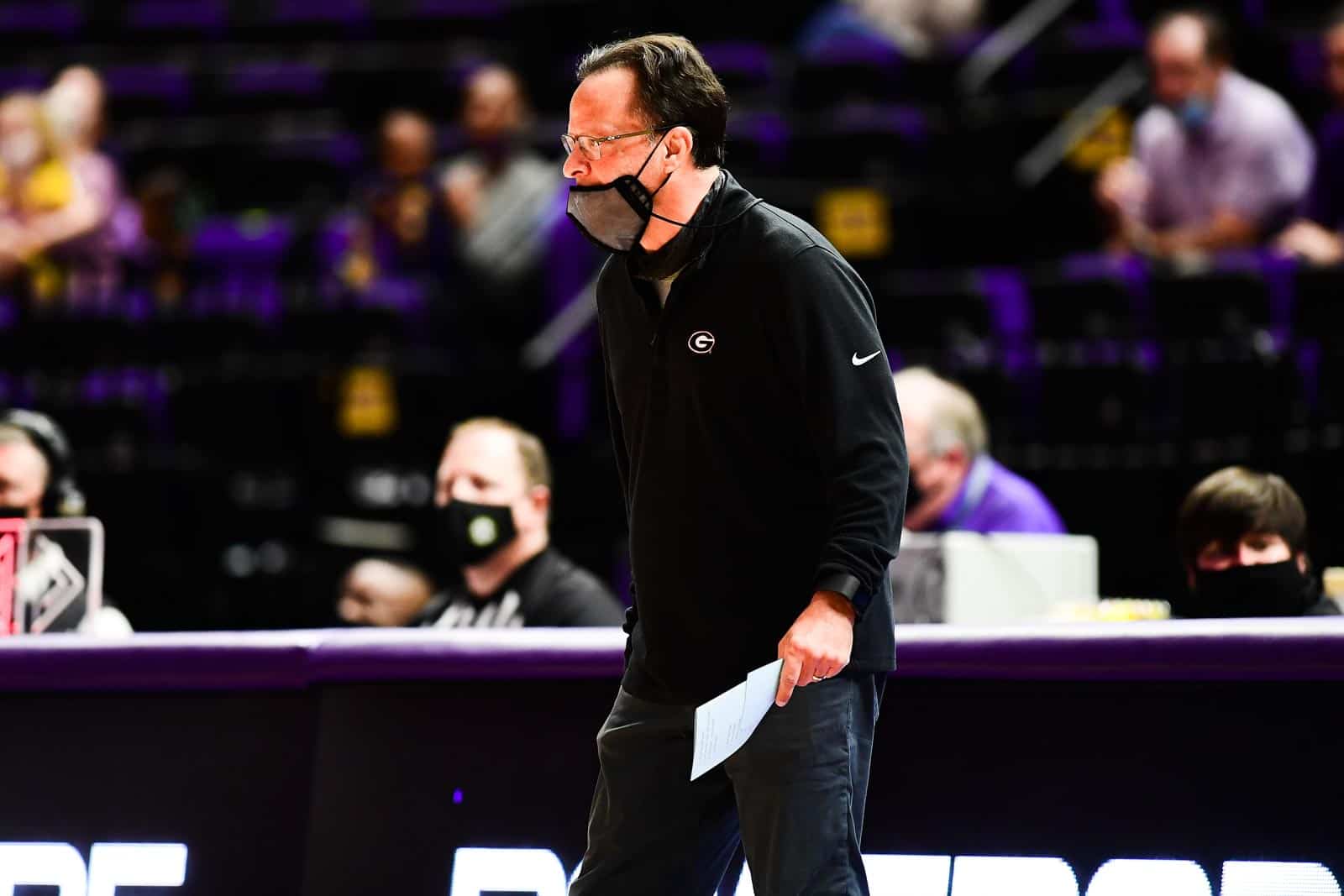 FAYETTEVILLE, Ark. – In a barrage of outside shooting, the University of Georgia men’s basketball team fell to the Arkansas Razorbacks, 99-69, Saturday afternoon before 4,400 fans at Bud Walton Arena.

Sophomore Toumani Camara and graduate Andrew Garcia tied for the team lead in scoring with 15 points each, with Camara hitting a career-high three 3-pointers and Garcia pulling in a season-high 11 rebounds. Sophomore Sahvir Wheeler posted 14 points and five assists, while graduate P.J. Horne tallied 10 points and five boards. For the game, the Bulldogs (7-3, 0-3 SEC) shot 42.9 percent from the field and outscored the Razorbacks (10-2, 2-2 SEC), 38-34, in points in the paint.

“We were right there in the first half,” said head coach Tom Crean following the game. “We were playing good ball in the first half. They punched us in the mouth early in the second half and we didn’t respond to it. We had nobody respond to it. No one took the bull by the horns, so to speak, to rally the team. We just did not get back defensively as well. We started trying to take things into our own hands offensively. We’ve got to make some adjustments. We need to some things differently.”

Camara was a one-man offense in the opening moments, scoring Georgia’s first eight points of the game and quickly matching his season high with consecutive 3-pointers. He eventually exited with two early fouls, allowing Arkansas to take the lead with a 7-0 run, which was countered on the fast break by back-to-back layups from Wheeler and graduate Justin Kier. Both teams continued the torrid scoring pace with Wheeler finishing at the rim and the Razorbacks connecting on consecutive treys, bringing the score to 27-24 Arkansas at the under-8 break.

Hurt by turnovers, the Bulldogs went over four minutes without a basket, but Wheeler and Camara brought Georgia back to within two points with transition scores. Following the short burst, Arkansas responded with one of its own to take a nine-point lead with just over a minute play, but Garcia narrowed the margin with five straight points. Nonetheless, a layup from Davonte Davis with two seconds left gave the Razorbacks a 43-37 advantage at the break.

The back-and-forth scoring resumed as the second half began, including three straight Georgia layups to start the period. Yet, as before, the Razorbacks began extending their advantage, culminating in a Vance Jackson 3-pointer that forced a Bulldog timeout down 12 at the 16:45 mark. Georgia’s fortunes continued to suffer as Camara picked up his fourth foul shortly thereafter, resulting in another four-minute scoring drought. Arkansas capitalized with three-consecutive triples, eventually increasing its lead to 20 midway through the half.

The Razorbacks carried on building their lead as the half wore on, taking advantage of Bulldog turnovers to make the score 79-52 with nearly eight minutes remaining. With a dominant transition game, Arkansas worked the margin up to a game-high 35, finishing off a 39-10 second half scoring run. In the final minutes of play, Garcia finished the game with Georgia’s final eight points, closing out the contest.

Georgia returns home next week for a matchup against Auburn (6-6, 0-4 SEC) on Wednesday, Jan. 13 at Stegeman Coliseum. The meeting with the Tigers is set for a 7 p.m. tip time and will be broadcast on SEC Network.