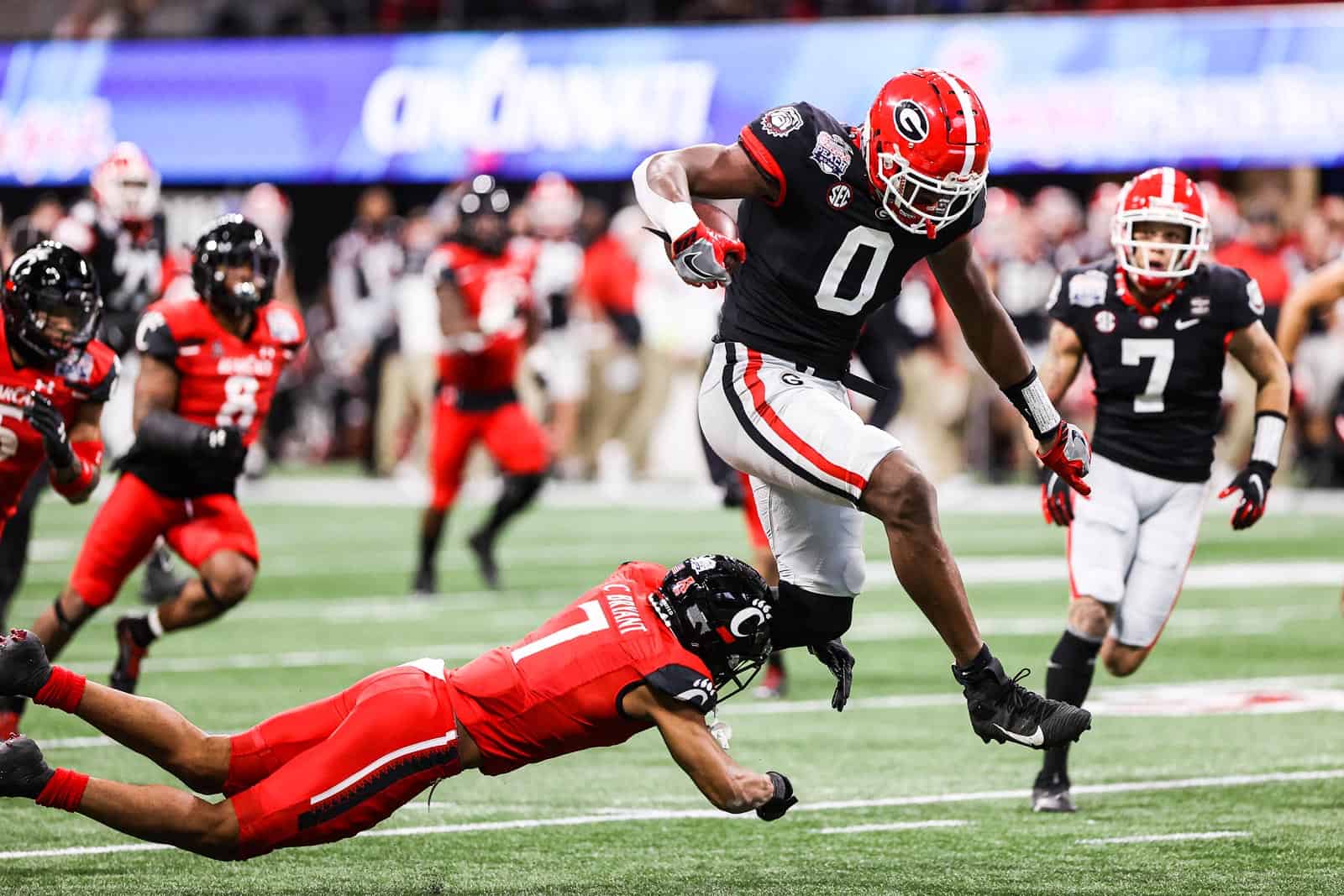 Podlesny’s kick was the first game-winning field goal for Georgia since Rodrigo Blankenship’s 25-yarder to defeat Kentucky in 2016. It was also the third bowl-winning kick in program history and the longest game winner overall since Kevin Butler’s 60-yard boot against Clemson in 1984. For his efforts, Podlesny was named the Peach Bowl Offensive Player of the Game, becoming just the second place-kicker to earn the honor.

Redshirt sophomore quarterback JT Daniels piloted the Bulldogs with 392 yards on 26-for-38 passing with one touchdown and an interception, while sophomore wideout George Pickens notched 135 yards on seven receptions, giving him 100-plus yards in consecutive bowl games.

Redshirt sophomore linebacker Azeez Ojulari earned Defensive Player of the Game honors with three sacks and two forced fumbles, tying the school record for sacks in a bowl game. Overall, the Bulldogs tied the school record for team sacks in a bowl with eight, matching the total set against Hawaii in the 2008 Sugar Bowl. Sophomore linebacker Nakobe Dean and junior linebacker Quay Walker led the Bulldogs with seven tackles apiece. Overall, Georgia held Cincinnati to 305 yards on offense, including just 107 in the second half.

Both teams’ defenses dominated early in the game, with Georgia punting on its first two possessions, although the second kick from junior Jake Camarda only traveled four yards. Starting on the Georgia 42-yard line, Cincinnati took advantage with the first scoring drive of the afternoon for either side as quarterback Desmond Ridder found receiver Alec Pierce for a 14-yard touchdown with 4:38 remaining in the first quarter.

The Bulldogs immediately responded with a diving 51-yard catch from Pickens on the first play of the ensuing drive, followed by a 12-yard rush from redshirt sophomore tailback Zamir White to enter the Bearcats’ red zone. Georgia was unable to convert however as Daniels was intercepted in the end zone by cornerback Coby Bryant, who subsequently lost the ball on a Pickens punch-out and forced Cincinnati to begin its drive at its own 1-yard line.

After the Bearcats stalled in their end zone, the Bulldogs started their next drive near midfield and quickly capitalized as freshman tight end Darnell Washington rumbled into Cincinnati territory on a 38-yard catch-and-run. Washington’s gain allowed for Daniels to connect with Pickens on a 16-yard touchdown pass, tying the game just before the end of the first quarter with a 5-play, 44-yard scoring drive.

In the second quarter, Cincinnati methodically moved down the field, but a third down incompletion forced a 33-yard field goal attempt from place-kicker Cole Smith that missed wide left. On the very next play, Daniels connected with freshman wideout Arian Smith on a 55-yard pass to the Cincinnati 25-yard line. Nonetheless, the Bearcat defense held the Bulldogs out of the end zone and forced a 37-yard field goal from Podlesny, giving Georgia a 10-7 lead with 3:46 remaining before halftime.

Once again, Cincinnati steadily moved the ball, highlighted by a 25-yard third down completion from Ridder to wideout Michael Young. Despite losing left tackle James Hudson to a targeting ejection, Ridder found tight end Josh Whyle for an 11-yard touchdown catch with just six seconds left in the half, moving Cincinnati ahead at the break.

The Bearcats carried the momentum into the second half, extending their lead to 21-10 on a 79-yard touchdown run from tailback Jerome Ford on the second play from scrimmage. However, following the scoring run, Cincinnati would only amass 28 yards of offense for the remainder of the afternoon.

On the ensuing drive, Georgia slowed its tempo and worked into Cincinnati territory, overcoming third-and-17 with consecutive completions to redshirt sophomore tight end John FitzPatrick and Pickens. Despite the conversion, Daniels fumbled on a first down sack and gave the Bearcats the ball at their own 23-yard line. The Georgia defense stepped up on the following drive, sacking Ridder twice and quickly forcing a punt.

Opening with the ball on the Cincinnati 49-yard line, Georgia moved toward the red zone with a pair of offsides penalties, but a stalled drive led to an unsuccessful fourth-and-1 attempt as Daniels’ throw to sophomore wideout Kearis Jackson was broken up.

Early in the fourth quarter, Ojulari put Georgia back in the game with a strip-sack of Ridder, recovered by junior linebacker Adam Anderson at the Cincinnati 25-yard line. With renewed confidence, Daniels found FitzPatrick for a 16-yard completion, followed by a 9-yard touchdown run from White. Following a failed two-point attempt, the Bulldogs had cut the deficit to 21-16 with 13:20 to play.

On the subsequent drive, a three-and-out from the Georgia defense was negated after Cincinnati punter James Smith picked up a first down on a 9-yard fake punt run, but the Bearcats were unable to exploit the conversion. The Bulldogs appeared to be headed toward regaining the lead with back-to-back long completions to Jackson and Pickens, but a sack-fumble by Daniels forced a 32-yard field goal from Podlesny, bringing the margin to 21-19 following a 6-play, 61-yard sequence.

After both teams punted, Cincinnati had an opportunity to run out the clock, but on third-and-2, Ridder’s pass was batted away by sophomore cornerback Tyrique Stevenson and Georgia regained possession. Daniels moved the Bulldogs down the field on an 8-play, 44-yard scoring drive, culminating in Podlesny’s 53-yard field goal to seal the comeback victory. On the final play of the contest, Ojulari added one more sack to his tally, tacking on a safety that set the final margin, bookending the Georgia season with two-point scores.

Georgia will next take the field on Saturday, Sept. 4 for a matchup against the Clemson Tigers at Bank of America Stadium in Charlotte.

*Dawgs Erase Deficit And Win Thriller: Georgia (8-2) erased an 11-point deficit in the second half and capped a 24-21 comeback with a 53-yard field goal from Jack Podlesny (Peach Bowl record) with two seconds left and then ended the game with a safety on a sack by Azeez Ojulari. Georgia’s first and last points of the 2020 season were safeties (at Arkansas in opener). Podlesny (Offense) and Ojulari (Defense) were named the Chick-fil-A MVPs of the game by the bowl. Cincinnati dropped to 9-1.
The Bulldogs tied a school record with eight sacks, including three by Ojulari which ties a bowl record. Podlesny’s field goal was the longest to win a game since 1984, when Kevin Butler hit a 60-yarder against No.2 Clemson in Athens with 11 seconds left. This is the largest deficit Georgia has overcome in the Kirby Smart era that began in 2016.

*Defense Today:  Coming in today, Georgia ranked second in the SEC in Scoring Defense (19.9 points per game).  In the first half, Cincinnati tallied 14 points, running 35 plays for 198 yards of total offense (170-pass, 28-rush) and then finished with 305 on 64 plays.  In the second half, UC was held to just a TD on 107 yards and 79 of that came on one play.
UC took a 7-0 lead in the first quarter, needing to go just 42 yards on seven plays after a four-yard punt. Right before the half, UC went ahead 14-10 with a 9-play, 75-yard TD drive in 3:40. On the second play of the second half, Jerome Ford had a 79-yard rushing TD to put UC up 21-10. Georgia’s next possession ended in a fumble at the UC 23. UC was shut out the rest of the way.
Today’s leading tackler was Nakobe Dean and Quay Walker with seven stops each. Jordan Davis had his first sack of the year while junior Adam Andersonhad two sacks to give him 6.5 for the season plus recovered a fumble. Senior Malik Herring added a sack in the second half to give him two this season. Redshirt sophomore Azeez Ojulari had a strip-sack (recovered by Anderson). It led to a TD two plays later. He added two more including one that resulted in a safety to end the contest, giving him a team-high 12.5 this year. The previous high sacks in a game this season was five against Tennessee.

*Bowl Streak Extended: Georgia extended the nation’s longest active bowl streak to 24 with today’s Chick-fil-A Peach Bowl appearance. With the victory, Georgia improved its all-time bowl record to 33-21-3 including 4-2 in Peach Bowls. This was Georgia’s first appearance in the Chick-fil-A Peach Bowl since 2006.  Today marked the first time since the 2008 Sugar Bowl that the Bulldogs faced an undefeated team in a bowl as UC was 9-0. That year, No. 10 Hawaii was 12-0 and No. 4 Georgia beat them 41-10. Also, it was the last time Georgia wore black jerseys in a bowl. Earlier this season, Georgia wore black jerseys in a win over Miss. State.

*Special Teams Summary: Redshirt sophomore PK Jack Podlesny went 3-for-3 on field goals: a 37-yarder with 3:46 left in the first half to make it 10-7; then a 32-yarder with 6:43 left in the game to make it 21-19, and finally the game-winner from 53 yards, a career long . He was 1-for-1 on a PAT. Podlesny finished the season 13-for-16 in field goals.  The 53-yarder tied a Peach Bowl record. Georgia now has made an NCAA record 330 consecutive PATs as the streak includes six kickers dating back to 2014.
Junior punter Jake Camarda, who is a finalist for The Ray Guy Award, finished with five punts for a 38.6 average. Also for the game, he had five kickoffs, all touchbacks. He came in averaging 47.9 yards per punt, however today his first punt hit a Bulldog, resulting in a 37-yarder, and his next one covered just four yards.

*A Look At The Running Game as Cook Honored:  Redshirt sophomore Zamir White had 39 yards on 11 carries while sophomore Kenny McIntosh had five for 18 yards.  Georgia’s second leading rusher, junior James Cook, did not play today as he wa7s back home in Florida after the sudden passing of his father James Cook Sr. Running backs coach Dell McGee wore Cook’s jersey today.

*For Starters:  The longest streak on defense belongs to sophomore safety Lewis Cine now with 12. The longest active starting streak on offense is 11 by junior lineman Jamaree Salyer and redshirt sophomore RB Zamir White. Georgia had two first-time starters today with redshirt freshman OL Xavier Truss at LT and junior DB Latavious Brini. Senior WR Demetris Robertson made his first start of the season and 18th of his career.

*The Captains: The seniors were today’s captains with Richard LeCounte going out for the coin toss. Cincinnati won the toss and elected to defer.