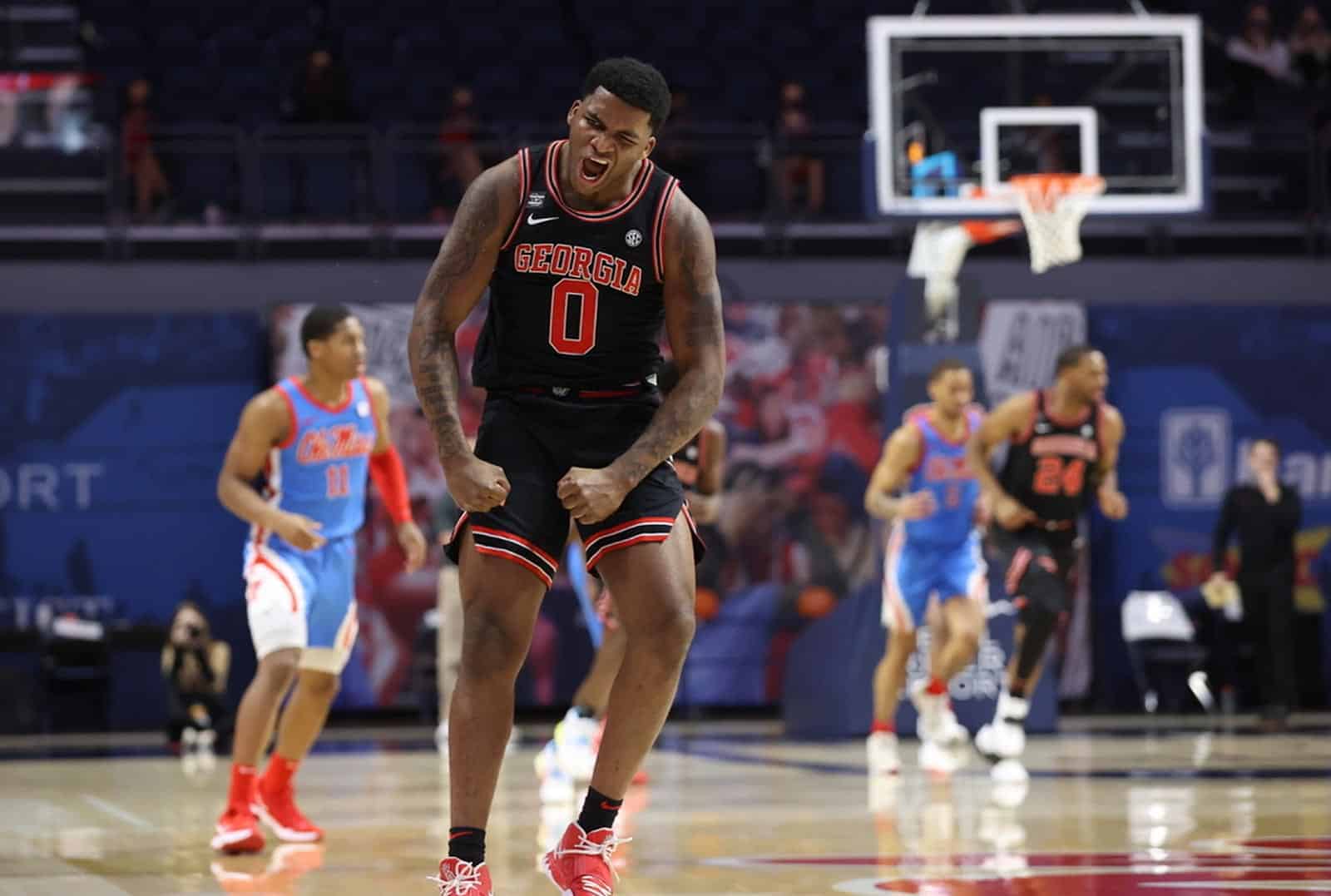 Oxford, Miss. – In a tale of two halves, an offensive outpour in the second half would lift the University of Georgia men’s basketball team to their first SEC win of the season, defeating the Ole Miss Rebels 78-74 Saturday afternoon at The Pavilion at Ole Miss.

After shooting just 41-percent from the field and 29 points, the Bulldogs’ offense exploded in the second half shooting 75-percent and scoring 49. As a team, the Bulldogs shot season high percentages in both free throws and 3-pointers. Georgia shot 15-17 from the charity strip, 82-percent, and was 9-15 from behind the arc, 60-percent.

Four Bulldogs saw double-digit scoring days with junior Tye Fagan leading the way with 19, while also tying a career high nine field goals made, going perfect from the field. Sophomore Sahvir Wheeler finished his afternoon with 18 and one assist shy of a double-double. Freshman K.D. Johnson followed up his 21-point debut with 14 and a 4-5 afternoon from behind the arc. Sophomore Toumani Camara finished the game with 13 points, while going 5-6 from the free-throw line.

These guys were ready to go, they were locked in, they warmed up well and they stuck together even when they made the runs,” Head Coach Tom Crean said. “They were really able to adjust, we did a lot of adjusting today. We did a lot of new things out of time outs based on how we were being defended. They responded to that, they were completely locked into the game plan and to winning the game and I’m proud of them.”

After a slow start offensively, five quick points from Wheeler got the ball rolling and Johnson continued to have the hot hand in terms of scoring, drilling a deep 3-pointer to cut the Ole Miss lead to one heading into the under 12 media timeout. Andrew Garcia hit a couple of free-throws to give the Dawgs their first lead of the game before a quick jumper by Jarkel Joiner gave the lead right back to the Rebels. Ole Miss would expand that one-point lead to six but would dwindle back down to one thanks to a 5-0 scoring run featuring a Camara and-one and a Fagan lay-up. The Rebels would continue to keep their distance, going on a run of their own to expand the lead to seven, the largest of the game to this point. The offense began to come alive as Georgia cut the lead to four as the final two-minutes of the half approached. The half would conclude with a Johnson three, his second of the game, to put the Bulldogs within one and P.J. Horne would get his first bucket of the game, giving Georgia the lead heading into the break.

The offense came much easier at the start of the second half, with both Bulldogs and Rebels hitting shots all around. Horne hit his first 3-pointer of the game and Georgia would go on a 7-0 run to take their halftime lead to nine with 15 minutes to go in the game. Fagan would go on to score 11 straight points to help build the Bulldog lead to 14 but would then find themselves up 12 at the under 12 media timeout. Rebels began to show signs of life as they cut the lead down to seven before a quick Wheeler lay-up put an end to the Rebel’s run. Just like how in the first Ole Miss would continue to keep their distance, it was the Bulldog’s turn in the second half with Garcia and Fagan pushing the lead back to double digits. The back and forth bout continued however, with Ole Miss’s Devontae Shuler hitting back-to-back 3-pointers to cut the lead to eight with seven minutes to play. A 6-0 run would expand the lead for the Dawgs but Shuler would keep the Rebels still in it, scoring five in a 7-0 run to cut the lead to three with two minutes remaining. Free throws would be the deciding factor late in the game with Wheeler and Kier icing the game making five of six to give the Bulldogs the 78-74 win.

Georgia will return to action on Wednesday, Jan. 20 as Kentucky (4-7, 3-1 SEC) will visit Athens for a 7 p.m. tip off at Stegeman Coliseum with television coverage provided by SEC Network.