Bulldogs down Wildcats in last-second thriller, 63-62

Bulldogs down Wildcats in last-second thriller, 63-62 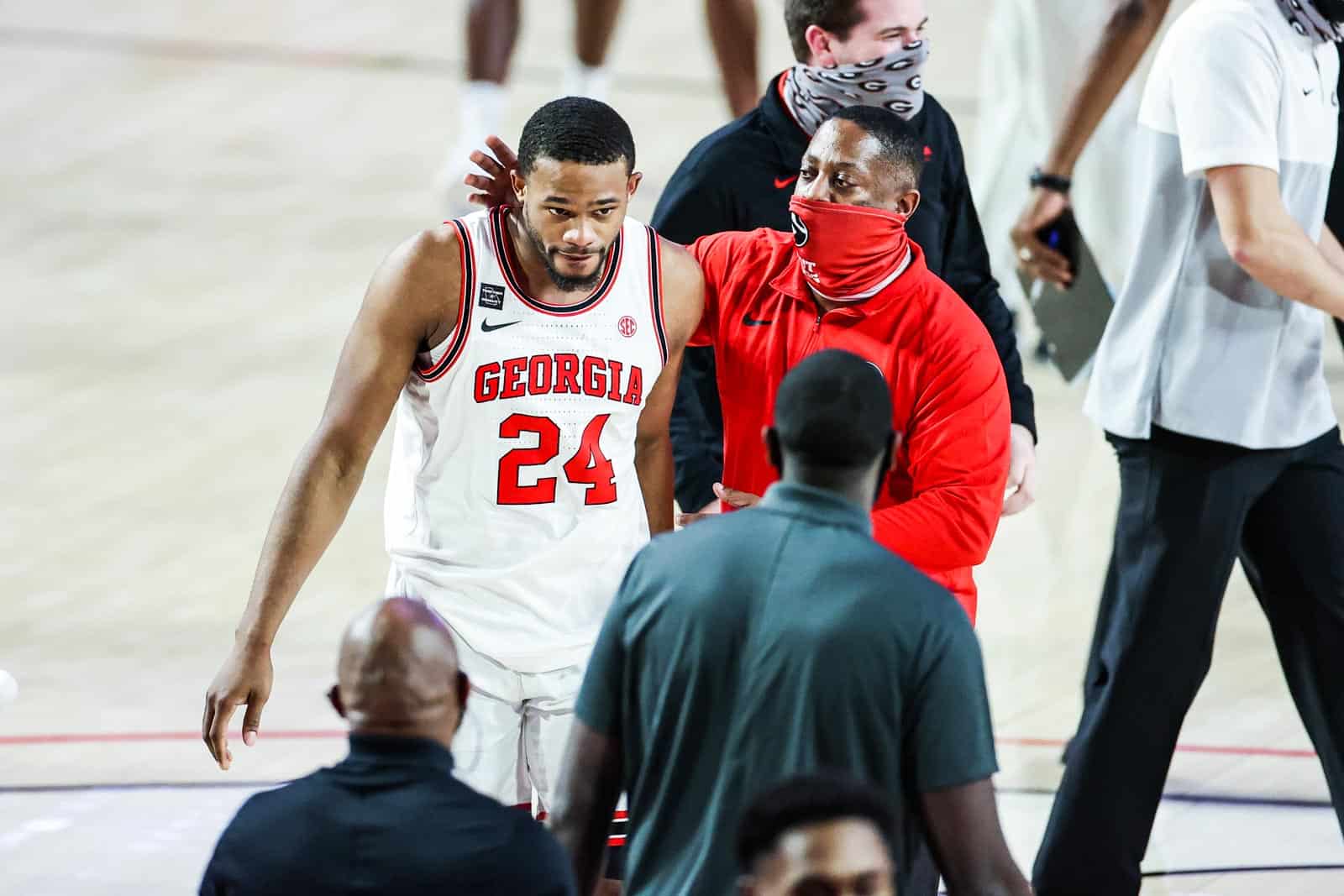 The thrilling victory was Georgia’s (9-4, 2-4 SEC) first over Kentucky (4-9, 3-3 SEC) since a 72-62 home win on March 7, 2013. The Bulldogs have now won back-to-back conference games for the first time since topping Auburn and Vanderbilt late last season. Coincidentally, that streak was also capped by a game winner in Tyree Crump’s buzzer-beating 3-pointer at Vanderbilt on Feb. 22, 2020.

Overall, Georgia shot 38.8 percent from the field and outscored Kentucky, 44-36, in the paint. The Bulldogs also held the Wildcats to 1-for-13 shooting from beyond the arc and led transition points by a 20-7 margin.

“It’s a great win against a great program,” said head coach Tom Crean following the game. “I’m glad we were able to break (the 14-game losing streak to Kentucky). We needed the win. Our guys needed a win like this against a great opponent…I’m proud of how they executed, how they persevered. We believed that we were going to win. I think that’s what’s so important.”

Both teams fought for buckets in the early going, with a 3-pointer from Horne helping Georgia build a 10-6 lead in the first six minutes of play. Despite struggling in its outside shooting, Kentucky took advantage of inside play to keep the score close before taking the lead midway through the half. The Bulldogs then turned to the paint to regain the lead, including three straight layups and a fast break dunk from Camara.

Coming out of the media timeout, the Bulldogs remained energized as Horne and Johnson connected on back-to-back threes to build a 26-17 advantage with five minutes to play in the period. The Wildcats quickly closed the margin to one point with an 8-0 run, but the Bulldogs were able to hold them scoreless for the 90 seconds of the half and maintain a 30-27 lead at intermission.

Kentucky retook the lead in the opening minute of the second half, but Georgia countered with a 6-0 run, capped off by another Camara dunk. Both teams went back-and-forth in scoring, with a goaltending call putting the Bulldogs up by three with 12 minutes to play. Spurred on by a technical foul against Garcia, the Wildcats then posted eight unanswered points to move ahead by the under-8 timeout.

Despite going over five minutes without a field goal, the Bulldogs were able to keep the Wildcats close, trailing by only two with three minutes remaining. After a short Kentucky run, Johnson again narrowed the margin with a deep triple. Then, with 34 seconds left, a Garcia layup brought the Bulldogs to within one.

Following a missed free throw, Wheeler drove to the rim, but was blocked out-of-bounds by freshman forward Isaiah Jackson. On the ensuing inbounds pass, Wheeler found Horne under the basket for the game-winning layup, completing a 7-0 Georgia run to close the contest.

“Sahvir did a great job, first calling the timeout, and second, with the pass,” said Crean. “Justin did a great job with the screen, and certainly, P.J. with the finish. For Sahvir to have that presence of mind—I never hesitated for a second having him take the ball out of bounds because he’s so smart and he’s savvy, and I knew he would make the right play.”

Georgia remains home for its annual rivalry game against Florida (7-4, 4-3 SEC) on Saturday, Jan. 23 at Stegeman Coliseum. The matchup with the Gators is set for a 2 p.m. tip time and will be broadcast on ESPN2.

• This is Georgia’s first win over Kentucky since March, 7, 2013, when the Bulldogs earned a 72-62 victory in Stegeman Coliseum.

• Georgia and Kentucky are familiar foes; the Wildcats currently own a 129-27 advantage in the all-time series against the Bulldogs, and a 44-18 edge in Athens.

• Reigning SEC Freshman of the Week KD Johnson had his third double-figure game of the season and his collegiate career.

• Graduate transfer Andrew Garcia notched a double-digit game on the court for the sixth time this season and the 46th of his career.

• Sophomore Sahvir Wheeler posted a double-figure game for the 11th time this season and for the 22nd of his career. Wheeler has scored 10+ points in 11 of 13 games this season.

• Georgia’s well conditioned team was on full display on the hardwood with 20 fast break points, holding Kentucky to a mere five.

• The Bulldogs remain one of the nation’s most balanced offensive teams, with no less than seven players averaging 9.5 ppg or more. Tonight’s game showcased this talent with three players scoring in the double-figures.

On the winning inbound play…

“We knew what we were looking for in the action, but we also knew we had time outs. That’s the greatest thing as a coach, for me, it’s taking timeouts home. You want to make sure that you have enough timeouts, so if you get in a situation like that you can use it if you don’t get what you want. He didn’t like the look. It wasn’t open, so he called the timeout, and we switched plays. Sahvir [Wheeler] did a great job first calling that timeout and second with the pass. Justin [Kier] did a great job with the screen and certainly P.J. [Horne] with the finish. For Sahvir [Wheeler] to have that presence of mind, and I never hesitated for a second having him take the ball out of bounds because he’s so smart, and he’s savvy, and I knew he would make the right play.

On Georgia getting a statement win…

“You know, I don’t know. It’s a great win against a great program. It hadn’t been done, and I didn’t realize until I said this on the radio, Mike Griffith told me that Kentucky had
won 14 straight, and I wasn’t aware of that. I’m glad that we were able to break that. We needed the win. Our guys needed a win like this against a great opponent, and we needed to get on a one game winning streak again, which is easier said than done. To have that mentality is really important, so I’m proud of how the executed, how they persevered. We believed that we were going to win. I think that’s what’s so important. It’s not them believing me because I don’t have any trouble believing, but it’s them believing each other, and I think that’s what we had tonight, and that’s what we had against Ole Miss. That’s really helped us, and that’s a part of our growth process.”

On decision to give the ball the P.J. Horne at the end…

“We got the guy we wanted. That’s who I wanted to hit, and there was a second option to it, but that’s the guy we wanted. That’s what we wanted on the first one, and Justin Kier was involved in the screening in both cases. We wanted to have a little big, I don’t mean little but a guard, bigger screen. We didn’t want to screen like. It’s too easy to switch, and we went with our seniors to put themselves in position to execute the action, and both plays we’ve never run in a game. I’m very proud of the way that they responded inside the timeout and executed it. The second one, we had only run-in practice a long time ago, but I trust them on that. We came out of timeouts against Ole Miss and executed actions that we hadn’t gone over at all, that we just drew up in timeouts. Sometimes this team can run something and not run it correct that we’ve run for two months, and sometimes we can put something in inside of a minute, and they can execute it in no time. It’s youth. I’m very proud of how they locked in, they executed, and, again, everyone did their job in the end.”

On the inbound play and the importance of the victory…

“It was big. I knew I had about 3.6 seconds left on the clock, so I knew I had time to figure something out to get the ball in the basket. I know it’s a big win, and we need to continue on with Florida coming up—we have to be able to prepare for that one and get ready to battle again.”

“It feels great. It feels amazing to be able to beat a team like Kentucky, who obviously is a good team coached by a great coach. We came to battle, and we came to fight. We had to believe, and I believe in my teammates on my side, who were telling me the whole time, ‘We’re going to win this game; we’re going to win this game’. So, I just went on and played to my best ability.”

“The first inbound play, we had never run before. We ran it maybe one time in practice, but we never really covered it, and it was a more complicated play rather than something
we can get on the fly. I feel like it was a good job by Sahvir [Wheeler] to call a timeout to regroup and not force anything that wasn’t there.”

“We are a young team. Everybody is emotional, and everybody wants to fight and wants to win. I feel like a lot of times we get in our heads and kind of get dismantled. I feel like what we learned across those games is we are a family. Off the court we are always together. Going to each other’s houses and stuff like that. It was about translating it to the game and keeping our positivity no matter what happens. If it is a turnover then we pick each other up and say, ‘Alright bro, next play.’ I am proud of our team and I am proud of our coaches. They have done a phenomenal job as whole unit. I feel like the way we are pushing is in the right direction.”

On his productivity and the height of Kentucky…

“Coach Cream and Coach McClain and the rest of the coaches were always harping on, ‘You got to be low.’ The last couple days they were preparing, they were drilling us ‘stay low.’ We knew [Olivier] Sarr is an incredible player, he’s tall, he’s big, he can shoot, he can move. We wanted to beat him to the spot. We wanted to make sure as a unit we call out as we get to the post, ‘Fire, fire.’ That kind of helped me. I am relentless. So, any way I can, I just try to fight down there. And, shout out to the coaches for helping us prepare. Because taking that post away helped us a lot.”

On ranking this among the most exciting games of his career…

“Oh, yeah this is definitely one of the most exciting games. Back at Stony Brook, we beat some high-major teams. I think my junior year we beat South Carolina, and we even came down 20 point to George Washington to come back and win the game. These games are always exciting to be a part of because as a collective, fighting unit, no matter what we are going to win. No matter what the score is, no matter what the odds are, and to prove something, uplifts out team. One game at a time—this is what we have to do.

“So, when we came to that timeout, Coach Crean stopped everything and told us to take three breaths. I thought that, as cliché as it sounds, I thought that really helped us. We were excited, everybody was pumped. We kind of get out of ourselves for a second. We got a little regroup. It was a little reminder that we got here playing as a team. That is how we are going to win—playing as a team. We took those three deep breaths and just got right back into it to fight.”