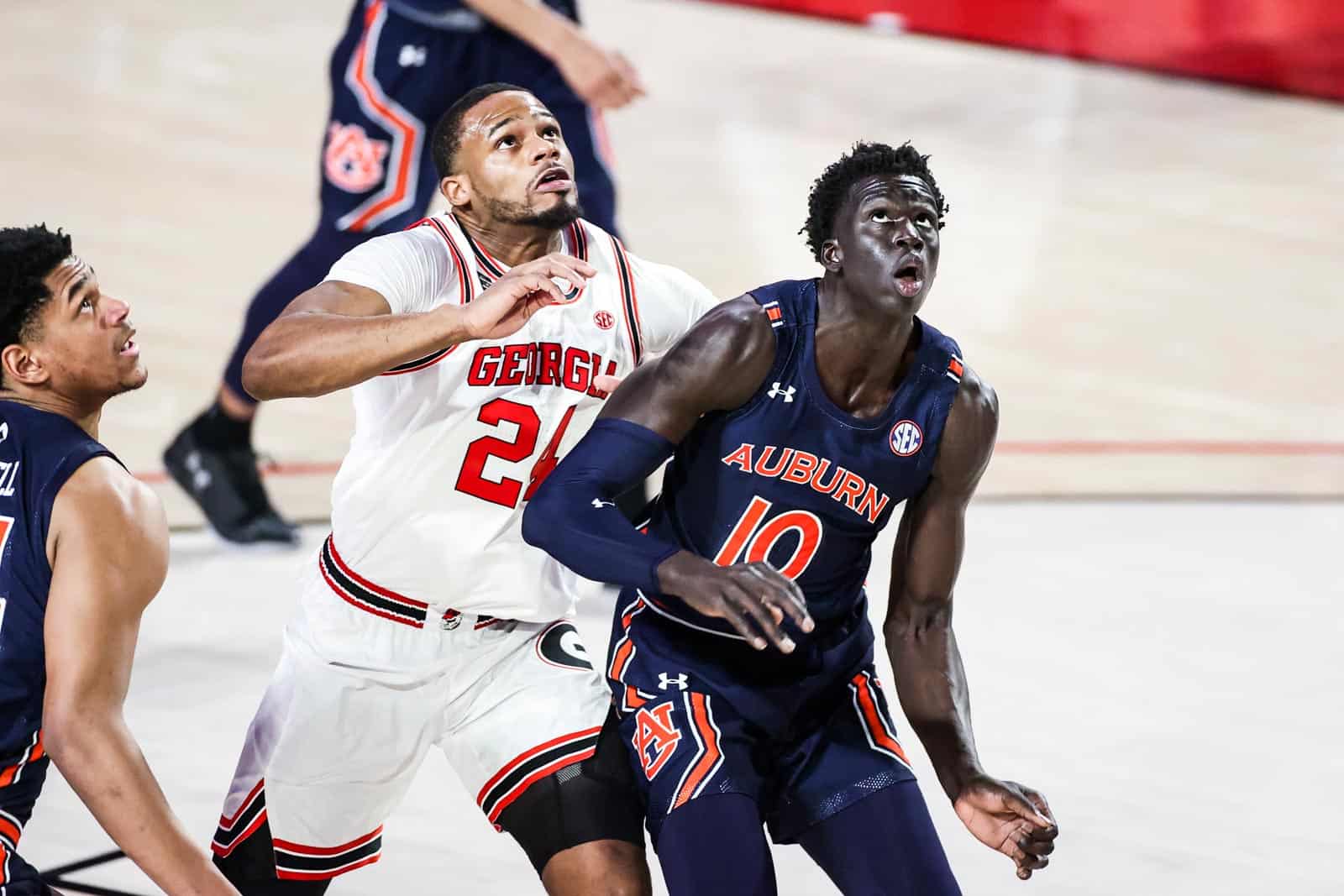 In his Georgia debut, freshman K.D. Johnson led the Bulldogs with 21 points on 9-for-19 shooting and seven rebounds, while sophomore Sahvir Wheeler pitched in with 19 points and five assists.

Sophomore Toumani Camara also tallied double digits in scoring with 12 points, while sophomore Christian Brown led the team with eight boards. For the night, Georgia shot 41.8 percent from the field.

“We missed [K.D. Johnson] for 10 games,” said head coach Tom Crean following the game. “He brings a different level of energy and competitiveness to the game, and he’s an attacker.”

Auburn controlled the scoring in the early going, jumping out a 12-4 lead thanks to five quick points from freshman forward JT Thor. Georgia was able to play itself back into the game, working inside with a series of layups to cut the lead to five midway through the half. The Bulldogs eventually closed to within two following a 3-pointer from Wheeler, but the Tigers countered with an 8-2 run to rebuild their lead.

With its edge now restored, Auburn continued to dominate in the fast break, extending its margin to 16 points as the final minute neared. However, layups from Camara and Johnson helped narrow the deficit and sent Georgia to the locker room trailing 45-34.

Georgia’s momentum continued into the second half as the Bulldogs scored seven straight points to cut the Auburn advantage to just four. But as they had before, the Tigers responded with a 20-3 run that was bolstered by an untimely Bulldog scoring drought. Aside from a pair of Wheeler free throws, Georgia went over seven minutes without a field goal, allowing Auburn’s lead to balloon to 21 by the under-12 timeout.

While three consecutive buckets from the Bulldogs ended the dry spell, Auburn capitalized on a series of Georgia turnovers to negate the run and maintain a 73-50 lead with eight minutes to play. Nonetheless, the Bulldogs continued to fight, led by Wheeler and Johnson, who connected on a pair of 3-pointers during the run. While the rally worked to lower the final score, the outstanding play of freshman guard Sharife Cooper, who finished with 28 points and 12 rebounds, continued to power Auburn as the contest drew to a close.

“We are not taking initiative of the ball stop,” said Crean. “We are looking for our own man rather than just being in an area with a man and just taking it. Those are the kind of things we have to get better at.”

Georgia returns to the road this weekend for a matchup against Ole Miss (6-5, 1-3 SEC) on Saturday, Jan. 16 at The Pavilion at Ole Miss in Oxford, Mississippi. The meeting with the Rebels is set for a noon tip time and will be broadcast on ESPN2.