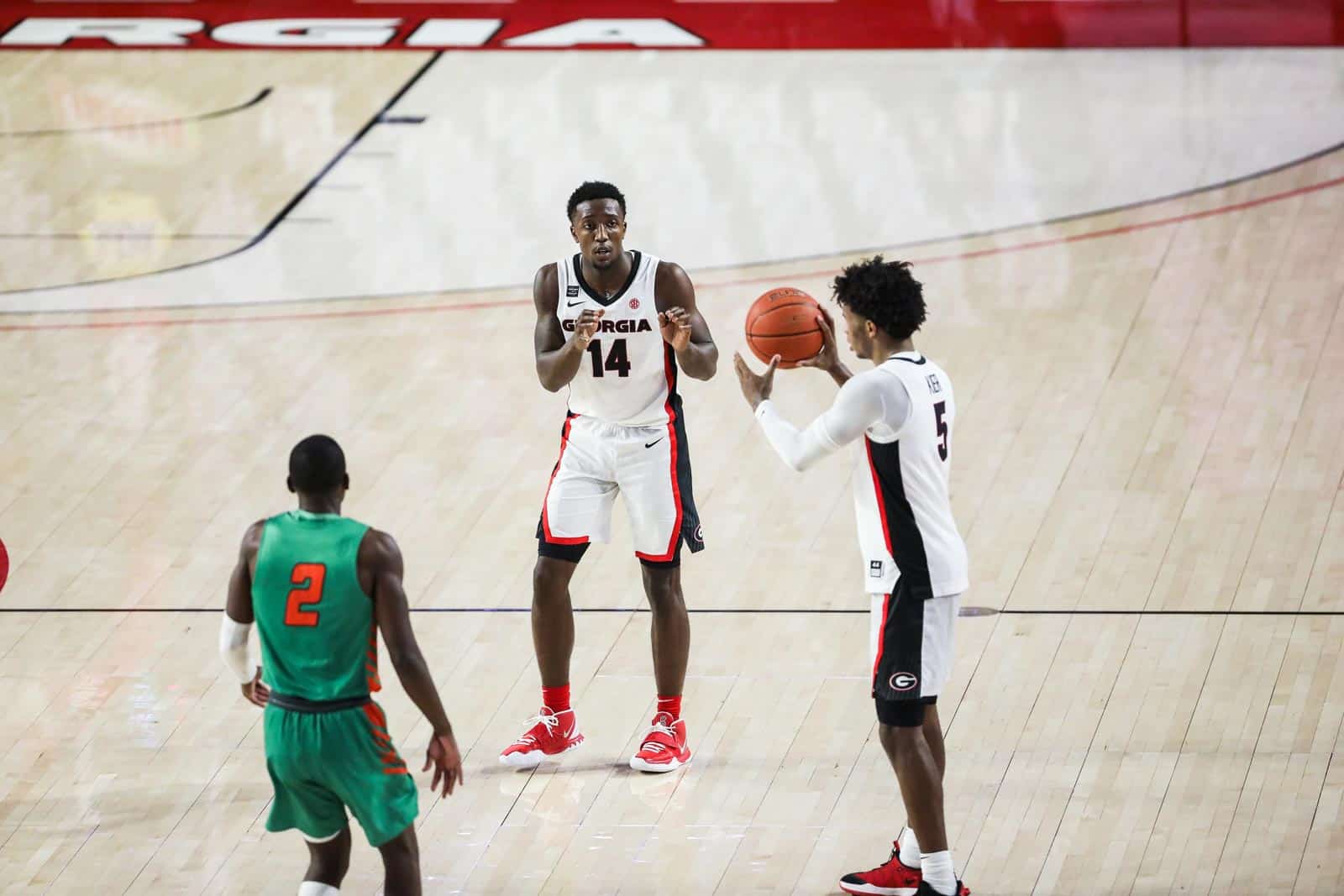 ATHENS, Ga. – Led by a pair of double-doubles, the University of Georgia men’s basketball team opened its 2020-21 season with an 85-75 over Florida A&M Sunday afternoon before 1,638 spectators at Stegeman Coliseum. The Bulldogs (1-0) were able to pull away late from the Rattlers (0-2) on the strength of 58 percent shooting in the second half, as well as a stout showing from their bench.

Stony Brook transfer Andrew Garcia led all scorers with 22 points on 6-of-8 shooting, along with four rebounds and two steals. Junior Tye Fagan posted a career-high 21 points on 9-of-10 shooting, picking up his first career double-double with a team-best 10 rebounds.

Sophomore Sahvir Wheeler also tallied a double-double with 12 points and a career-high 12 assists, becoming the first Bulldog to amass 12 assists since G.G. Smith against Vanderbilt on Feb. 3, 1999. Led by Garcia, the Georgia bench outscored Florida A&M, 37-2, while also dominating in the paint with a 50-32 points in the paint advantage.

“We had no idea what to expect, and I know that sounds cliché, but it just totally is,” said head coach Tom Crean following the game. “We hadn’t played a game against somebody else since March 10. That’s why Wednesday night was so important, with no exhibitions or scrimmages, but we didn’t get it. I’m proud of the way they came out and started the game.”

The Bulldogs opened quickly, moving out to a 13-2 lead before the first media timeout, with four starters contributing buckets and Fagan grabbing six fast rebounds. The Rattlers responded with a 7-3 run as both teams continued to struggle from beyond the arc in the early going, shooting for a combined 1-for-11 through the under-12 break.

“We want to be a quick-starting team – that was a very quick start for us,” said Crean. “We were locked in. We had a great walkthrough this morning. They were lively and energetic and ready to play against somebody else, but then reality sets in, and you are actually playing against someone else. In practice, you can stop things, you can do X amount of possessions and then change over, and we had to keep going and these guys learned.”

FAMU continued to eat into the advantage, eventually taking the lead for the first time with under six minutes to play in the half on a jumper from junior guard MJ Randolph. The Rattlers continued to ride sharp shooting to a five-point lead until sophomore Christian Brown converted on a four-point play at the 2:31 mark to regain the lead. Brown and Garcia would combine to score the Bulldogs’ final 15 points of the half, with Brown’s jumper with one second remaining setting the score at 38-37 Georgia heading into the locker room.

As the second half opened, Fagan asserted himself, scoring Georgia’s first six points of the half. Yet, Florida A&M stayed hot itself, connecting on its first three field goals of the half to maintain the tie score through the first break, but four straight Fagan baskets punctuated a 10-0 Georgia run comprised entirely of fast break points. Nonetheless, Randolph’s scoring kept the Rattlers in the contest, narrowing the margin back down to four midway through the half. He would eventually finish with 21 points of 9-of-13 shooting to lead FAMU in scoring for the afternoon.

Following a short scoring drought, graduate transfer P.J. Horne’s 3-pointer with 5:50 remaining brought the Bulldogs’ lead to a game-high 12 points. Fellow graduate Justin Kier would also add to the tally with a three of his own, combining with solid shooting from the foul line to help Georgia finally seal control of the contest with just over two minutes to play. FAMU would tack on an 8-2 run in the final minutes to close out the scoring as the Bulldogs notched a season-opening victory.

Georgia will remain home this week as it plays host to the Jacksonville Dolphins on Friday, Dec. 4 at Stegeman Coliseum. The non-conference matchup is set for a 7 p.m. tip time and will be broadcast on SEC Network.

• With tonight’s win, Georgia improves to 83-33 all-time in season openers, including a 37-6 record at Stegeman Coliseum. While Tom Crean advances to 20-1 all-time in season openers as a head coach, 3-0 while at Georgia.
• Georgia now takes a 4-0 lead in the all time series against Florida A&M.
• Georgia’s roster featured eight newcomers with representatives in each class.
• Sophomore Sahvir Wheeler, had his first career double-double, with 12 points and a career high of 12 assists.
• Wheeler, is also the first Georgia player to have more than 10 assists since G.G. Smith had 12 against Vanderbilt on Feb. 3, 1999.
• Junior Tye Fagan, also had his first career double-double with 21 points and 10 rebounds.
• The last time Georgia had two double-doubles in one game was Nicolas Claxton and Derek Ogbiede on March 9, 2019 against South Carolina.
• Graduate transfer Andrew Garcia, scored 22 points which is higher than his season average at Stony Brook where he averaged 13. 4 last year. This was also his sixth career 20 plus point game.
• Georgia’s field goal percentage in the first half was 38.7 percent and in the second half it was 58.1 percent.
• Nine different players scored a point in tonight’s game, and 10 different players had a rebound.

On the first game…
“I liked our start. I don’t think there was any question about that. This morning at our walkthrough, everyone was energized and ready to play. Certainly, there was apprehension even yesterday about if we were really doing this for nothing again, in the sense that were we actually going to play today. I don’t mean for nothing but in the sense of are we actually going to play a game. They were ready to go. They were excited to play. We tried to play a lot of people, which was something that I really wanted to do. It quickly became a game of who is going to make some defensive stops by guarding their man, where is our help defense going to get better and who can help it get better, and who can be on the glass. I wasn’t as concerned about the offense today because I knew if we got stops, we were going to get out and run. there were too many times, and this is just going to have to work out with experience, where we were too slow against their press, first half and second half, where we just didn’t get out and attack it like we wanted to. There were too many times where we didn’t stay behind the defense because they really lifted up. Tye Fagan obviously knew what he was doing in that area getting back and cutting and the other guys, now that they have this game experience, and they continue to see it they will get better too. It thought there were a lot of positives. I thought we beat a team taht was very comfortable playing college basketball. Maybe they weren’t as much when they lost on the road the other night, but today they were. Robert [McCullum] is an excellent coach. We competed against each other in Conference USA when he was at South Florida and I was at Marquette, so I knew he was going to come in. I’m glad that we worked, even if we didn’t attack it really well, on their zone press to zone because we really felt that once they saw our speed that we would get a real dose of that. That gives us something to study now instead of watching last year’s film or watching other guys that we’ve had over a period of time. Now we get to watch ourselves. I think that will be really helpful.”

On the new players on the team…
“Well, it’s both. P.J. [Horne] is a phenomenal shooter. Andrew [Garcia] is getting better as a shooter. He made 25 threes last year at Stony Brook High School, and P.J. [Horne] made 45 [at Virginia Tech]. They will at least double those numbers for us this year. But, I am thinking what I am learning when you have grad transfers like this is as much as we want them to learn how we want to play. They know they are getting better; they know they are getting pushed in different areas and have different skills that they might not have had before. I think the most important thing and I think Andrew showed this that you have to let them play the way they are most comfortable playing. They had 22/23 years of life before us. I thought Andrew did a great job of just playing to his strengths. That is what we have to do with Justin [Kier], P.J., Ty McMillin to a degree.”

On how it felt to start the season as an offensive leader…
“It feels great. I’ve had chances in the past and when I get them, I just try to see the opportunity. I don’t really think about playing much or not playing much. I just try to do what they need me to do. In the past I had a smaller role—now I have a bigger role. That’s just what it is, I’m just trying to win the game. So, whatever the team needs from me, that is what I am going to try and do.”

On the experience make-up of the team with graduate transfers and new additions…
“No, I don’t think it will be a problem because these pieces that we have now fit as well. The pieces we had last year fit as how we wanted them to fit. Things just didn’t turn out how we wanted them to—that’s just the game, that’s life, that’s just how it is. For this year with the new guys, we have a lot of leaders. Like the graduates, they’re doing well, they’re leaders. Like Justin [Kier], P.J. [Horne], all those guys they help lead. And that’s one of my roles too, on the team. I always wanted to be a leader. To help the guys who don’t understand something, understand it. And we are starting to understand it very well. I know we didn’t show it in the first half, but in the second half, we showed it better. And that’s why it helps to have older guys: leadership.”

On having little to no expectations coming into today and coming off the bench…
“Coach Crean really emphasized that we have a lot of players at every position coming in and out and just giving it our all. He just wants us to play hard and execute as a team. ”

On trying to prepare for a season on a new team with games being uncertain…
“ It’s been pretty crazy, but Coach talks every day about how we don’t know what is going to happen the next day, like with the last game just being canceled on Wednesday. Sahvir [Wheeler], Toumani [Camara] and the rest of the team are just trying to keep everybody focused, prepared, and ready to go. We’ve been trying to bring that same