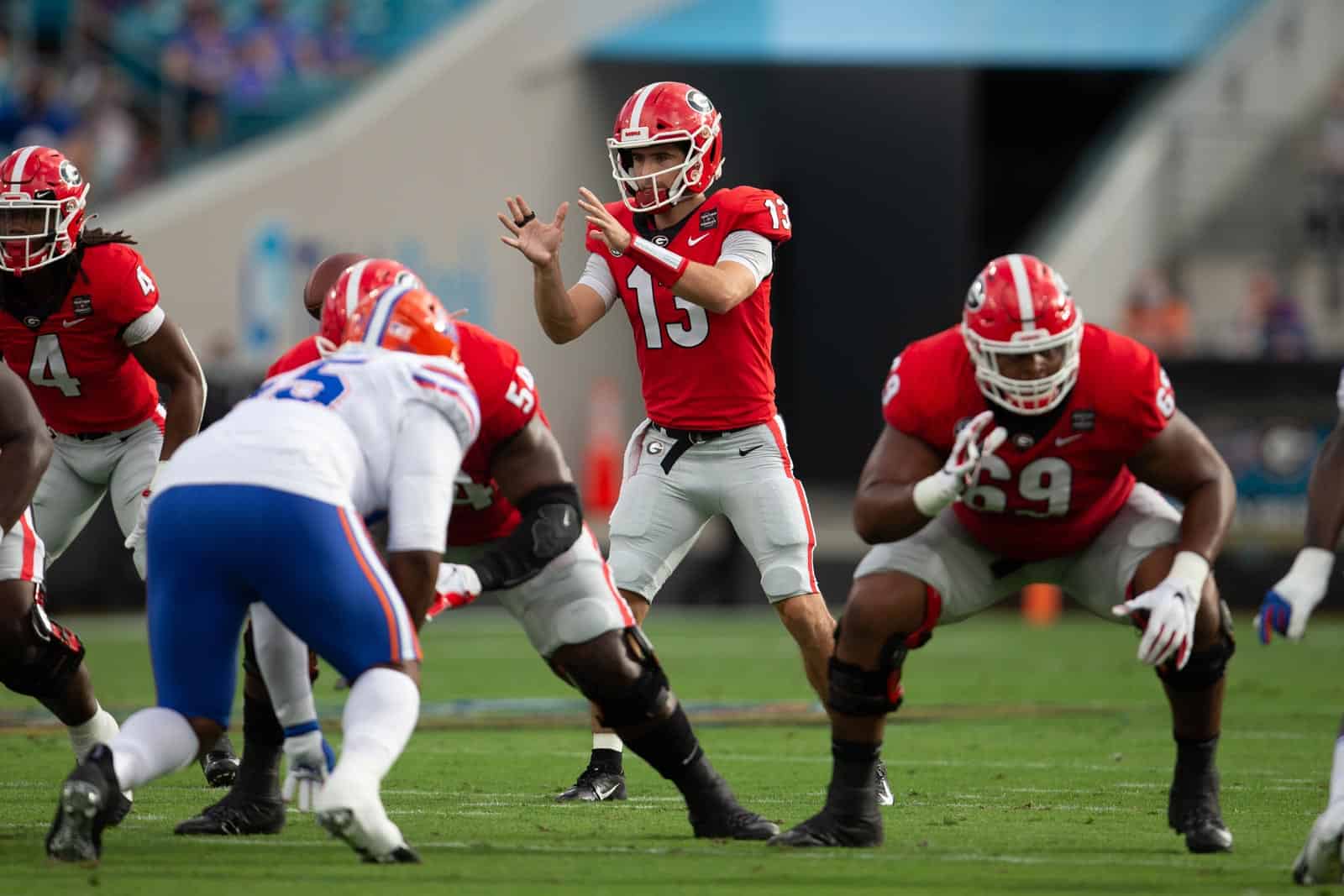 “The defensive injuries were tough on us,” said head coach Kirby Smart following the game. “We have to have better communication. We gave out a lot of free yards. But give them credit. Florida had a good plan; they did a good job. I thought our guys had a really good plan to start offensively. We started out with some rhythm and did things well early on.”

On the first play from scrimmage, White immediately put Georgia on the board with a 75-yard rushing touchdown, the first time the Bulldogs had scored on their opening play since 2017. Following a three-and-out for the Gators, the Bulldogs quickly moved into Florida territory before Bennett found freshman wideout Marcus Rosemy-Jacksaint for a 32-yard touchdown, building an early 14-0 lead.

Facing a two-score deficit, Florida’s offense broke into Georgia territory with a 39-yard completion from Kyle Trask to Keon Zipperer, leading to a 14-yard touchdown catch by Justin Shorter with 8:20 remaining in the first quarter. On their ensuing possession, the Gators again worked down the field, culminating in a 2-yard touchdown run from Dameon Pierce to tie the game at 14.

Early in the second quarter, Georgia retook the lead as junior cornerback Eric Stokes picked off Trask and returned it 37 yards for his second touchdown of the season, giving the Bulldogs a 21-14 advantage with 12:17 to play in the half. Despite the turnover, Florida soon rebounded with a two-play scoring drive, featuring a 50-yard completion followed by a 25-yard scoring completion to Kyle Pitts.

Following a Georgia punt, Florida broke the tie with a 24-yard touchdown catch by Kemore Gamble before later adding a 50-yard field goal from Evan McPherson. The Gators then tacked on another score before the half, taking advantage of a short punt with a 14-yard touchdown from Trask to Trevon Grimes, sending the Bulldogs to the locker room facing a 38-21 deficit.

After Florida notched a 51-yard field goal on its opening possession of the second half, Georgia looked to narrow the margin, but Bennett was intercepted at the Florida 35-yard line on 3rd-and-10 near midfield. On the next Bulldog possession, Mathis entered the game and engineered Georgia’s first scoring drive since the opening quarter. Following a conversion on 4th-and-1 at midfield, Mathis found Jackson for a 25-yard touchdown, completing a 12-play, 80-yard sequence.

Following a missed 44-yard field goal by McPherson, both teams began trading punts in the fourth quarter. After a near pick-six by senior cornerback Mark Webb, the Gators looked to seal the game but the Bulldog defense forced an incompletion on 4th-and-4 at the Georgia 28 with five minutes remaining. On the next possession, Mathis was intercepted on a fourth down attempt, allowing Florida to close the scoring with a 34-yard field goal.

Georgia remains on the road next week for a matchup with Missouri (2-3, 2-3 SEC) on Saturday, Nov. 14 at Faurot Field in Columbia. The game is set for a noon start time and will be broadcast on ESPN.

*Defense Posts Strong Second Half:  Coming in today, Georgia was leading the SEC and ranked 12th nationally in Scoring Defense at 16.2 points per game while UF was averaging 42.0 points a game which is 10th nationally. The Bulldogs were missing three defensive starters today due to injury (NT Jordan Davis, DT Julian Rochester and safety Richard LeCounte) and lost 44-28. UF tallied 38 points in the first half, on TD-scoring drives that covered 48, 75 (twice), 80 and 81 yards plus one field goal but managed just six points in the 2nd half. In the first half, UF had 411 yards of total offense on 46 plays. UF finished with 572 yards of total offense on 79 plays but just 161 yards on 32 plays in the second half.
Georgia junior DB Eric Stokes notched a 37-yard interception return to make it 21-14. That was his second pick-six of the year (30-yarder at Arkansas) and his third overall INT, tying him for the team lead with LeCounte. In the second quarter, sophomore stating FS Lewis Cine was ejected for targeting. He had a team-high six tackles at that point. UF QB Kyle Trask was 30-for-43 for 474 yards with 4 TDs, 1 INT. His passing yards was second only to Jared Lorenzen (UK) who had 528 (39-for-58) in 2000 for the most ever by a Bulldog opponent.

*A Look At The QBs: Junior QB Stetson Bennett (5-for-16, 78 yards, 1 TD, 1 INT) directed No. 5 Georgia to a quick 14-0 advantage, scoring on its first two possessions in the first 3:16 of the contest. Today, UF tied the game at 14 with 1:43 left in the first. Georgia’s second scoring drive covered 61 yards on six plays in 2:14. It was capped by a 32-yard TD reception from Bennett to Marcus Rosemy-Jacksaint. Redshirt freshman QB D’Wan Mathis (4-13, 34 yards, 1 TD, 2 INT) entered at QB on the final drive of the first quarter when Bennett left the game to go to the locker room, and Georgia ran three plays and punted. Bennett returned on the next possession. In the 3rd quarter with 7:06 left and down 41-21, Mathis went back in. Mathis notched his first career TD pass, and it came on a 3rd-and-14 to Kearis Jackson and covered 25 yards to culminate a 12 play, 80-yard drive. It was Jackson’s second of the year.  The Bulldogs finished today with 277 yards of total offense on 58 plays.

*Big Score For Rosemy-Jacksaint But Injured on Play: In the first quarter, true freshman Marcus Rosemy-Jacksaint caught a career-long 32-yard TD on a 3rd-and-7, however he injured his right ankle on the play and did not return. It was his first career TD and fourth career catch.

*White Leads The Running Game: Sophomore Zamir White had a 75-yard TD run to open the game and finished with 107 yards on seven carries for his second straight 100+yard game. White’s TD run marked the longest since D’Andre Swift went 83 yards against Kentucky in 2018. It marked the first time since 2017 when Georgia scored a TD on its first offensive play. That one came against No. 17 Miss. State and was a 59-yard flea-flicker from Jake Fromm to Terry Godwin. Before today, the last time Georgia scored on its first offensive play that was a run came in 2016, a 55-yarder by Isaiah McKenzie versus Louisiana.

*Special Teams Summary: Redshirt sophomore PK Jack Podlesny went 4-for-4 in PATs. Georgia now has made an NCAA record 312 consecutive PATs as the streak includes six kickers dating back to 2014. Junior punter Jake Camarda finished with seven punts for a 43.7 average. Coming in today, Camarda ranked No. 1 nationally in punting (50.4 avg.) and the team was 2nd nationally in Net Punting (47.9). Redshirt sophomore Kearis Jackson had a career-high 56-yard kickoff return in the first quarter to the UF 44 and finished with three overall for 99 yards. Coming in today, Georgia ranked third nationally in kick return (33.2 avg.).

*Points Off Turnovers: Georgia scored 7 points off a pick-six by junior Eric Stokes. It was only the third INT for UF QB Kyle Trask this year. Florida got three points off three Bulldog interceptions.

*Captains: Georgia senior Monty Rice and juniors James Cook and Tyson Campbell served as the captains. Florida won the toss and elected to defer until the second half.

*Series History: With today’s defeat, Georgia still holds a 53-44-2 edge in the series including 46-41-1 in Jacksonville. The Bulldogs saw their three-game winning streak in the series end. Today marked the third straight Top 10 matchup. Georgia is 4-4 versus UF in these while the Bulldogs are now 9-6 in top 10 games under Kirby Smart.