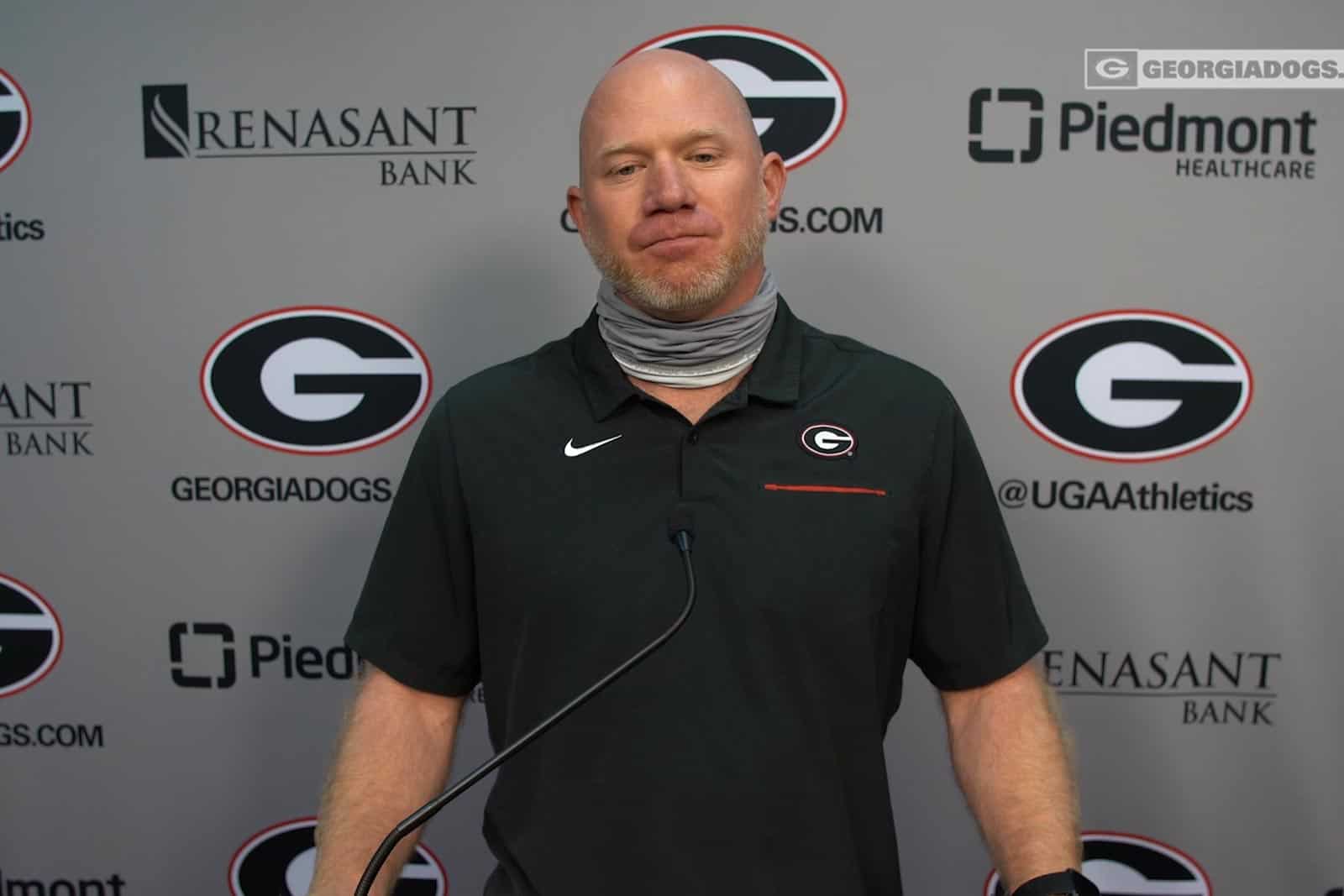 On why the move to UGA was important to him and what made him choose Georgia…“I’ve always wanted to coach, and I found the best opportunity. Coach Smart gave it to me, and I had to jump on it.”

On the transition to special teams coordinator/how much his experience at Alabama prepared him…“I would say it’s been challenging for sure, and that’s kind of what I was looking for. When I first got into coaching, it was at the high school level, and I kind of fell in love with special teams and strength and conditional sort of came with it. When I had the opportunity to do strength or special teams when I was a GA (graduate assistant), I went with the strength side. Now, I wanted to transition into special teams.”

On the differences in the Georgia culture and Alabama culture in terms of his staff…“Knowing Coach Smart since LSU days, and then obviously that time at Alabama, I think everything that he does, he has a process and has an organized plan for everything. Then cultural wise, it’s been fun just to get to know the players. Diving into the culture side, there are a lot of similarities for sure.”

On his thoughts about returning to Alabama in his new role…“I’m just excited. I mean, how could you not be? Just having football alone is exciting, but going back [to Alabama]— every game is important— when that time comes, it’s going to be great.”

On what has been the reaction from the Alabama community since his departure…“It’s so hard to tell because everyone I knew and everyone I was around was always pro the players, just like I was, and pro my personal development. I think this COVID pandemic has kind of pushed my stuff away, which has been great in a way, so I could really concentrate on being great at my current job.”

On his ‘funeral’ comment leading up to the 2008 Georgia vs. Alabama game…“The great thing about that is that no one remembers that—the players [at UGA]. No one even knows about it, so don’t tell anybody. Help me out a little bit. I’m trying to gain the respect around here. I was kind of keeping that on the DL, right now. In reality, I think in that moment it was kind of make or break. I wasn’t planning on it becoming public at all, but at the same time when it did—I was scared to death. I was 29 years old, I think. Whew! I thought I was going to lose my job.”

On his ‘funeral’ comment becoming ‘bulletin board’ content…“That’s exactly what everyone said. You know [people said], ‘They didn’t need motivation; you just gave it to them.’ I was like, ‘Yeah, thanks.’”

On the different approaches he takes now as an on-field coach that he did not necessarily take as a strength coach…“For me, I have to really be specific with my time. In the weight room, you didn’t have as much time. Now, I have time I feel like on the field, but I’m missing that hour in the weight room. It’s kind of a catch-22, but yes. For me, I feel like I have to be detailed, and I have to be very specific on my goals on who I am trying to reach, what players I’m trying to reach to do a better job—whether it be on kickoff or kick return. So, it’s very similar, but I feel like, because of the weight room, now I have to be way more detailed, and kind of planned on what I’m going to say.”

On his journey to becoming an on-field coach…“It’s one of those things that was always in the back of my mind, that I wanted to get on the field—to see this side of it and work this side. When I had the opportunity, I mean come on, Coach Smart is the best to do it. So, let’s go!”

On what made him finally decide to make the transition out of Alabama…“I think everything happens for a reason. Timing is everything and, at the time, I felt like I was in a good place. Now, I feel like I’m in a great place! I think timing has everything to do with it and, for me, right now is the time. I’m just excited about [this] opportunity.” On his philosophy…“Speed kills. Speed kills! If you’re fast and physical, I am going to find a spot. [You] don’t have to be the smartest guy on the team, you just have to be fast and physical.”

On how involved he was in recruiting this summer/what he brings to the process…
“I was expecting to get on the road. I was expecting to meet guys. Now, everything is virtual, so that was a challenge. I like sitting face-to-face and talking it out, but I’ve been able to do that virtually. What I bring is what I’ve always brought, and I’m going to be real and tell them like it is. I’m going to help them develop before they get here and, once they get here, I’m going to continue that process.”

On his take on last weekend’s scrimmage/what was sloppy from a special teams standpoint…
“​It’s the first scrimmage. Before we got to the scrimmage in a full setting, we did a lot of reps and individual stuff, but that full setting, I agree 100%. We’re coaches; this is what we do. We’re going to coach it until we can’t get it wrong. This second scrimmage, we’re going to hopefully come out a little bit better.”

On the guys who jump out at him who are ‘physical freaks’…
“The O-line and D-line— you could list anyone on it. Then, you go to the linebackers, [and] it’s hard not to see their size when you see them. To me, that’s a big hats off to Coach [Scott] Sinclair. He does a really good job, but to say specific names— I would leave out so many.”

On his thoughts about the way Georgia does strength and conditioning/the work Scott Sinclair does…
​​”He knows what he’s doing, that’s for sure. I’m very impressed by the way he handles things from top to bottom in the weight room. The stuff that I’ve seen has been awesome, so I’m a big fan of the stuff he does for sure.”

On his assessment of Georgia’s kicking and return games as they stand right now/whether he sees Jake Camarda as being the major threat in taking the starting job…
<“We have competition everywhere. From the deep snappers, we have three guys attacking it every day to try to figure out who’s going to be the guy. For kick off, we have four guys going at it. Jake [Camarda] is in the mix, [Jack] Podlesny and [Jared] Zirkel are doing really well. It’s a lot of fun for me with the returners, because you’ve got Kearis Jackson, [James] Cook and Zamir [White]. I’ve got a lot of cool toys to play with, [and] there’s a lot of competition on that side of it, so everyone gets better, and that’s great for us.”

On whether he has always possessed so much energy
“I would say ‘yes’ to that, but I think it’s all about timing, too. The one thing for me— and this is for recruiting too and coaching— is I just like to be real. If it’s needed, I’m going to do it. If we’re out there and dead and moving then, man, what a great way to set the tempo with special teams. We start every game, every half like, “Let’s go!” Are you kidding? Have I always been that way? I think so.”

On whether he ever had a moment where the decision to make the move to UGA clicked…
“I don’t know if there was a moment that made it click. I just think that it was time for me to transition. There’s no time like the present. I hated the fact that right after, we had the pandemic. At the same time, maybe I can use it to my advantage like I tell the players to use it to their advantage. It can be all negative, but everybody’s got the same problem, so decide today that it’s going to be an advantage which is near impossible to say with all the stuff going on.”

On where his toughness, work ethic and confidence originate…
“It’s all from my momma and daddy for sure, hands down. Dad was military and Mom was a teacher, so that definitely ran in the family of being tough and having a good time being tough, too.”

On whether he expects to have nerves heading into his first game in his position…
“Yes. Yes for sure. I’m big on nerves. I’m big on controlling your nerves. I have to deal with, obviously dealing with specialist a lot, but I’m dealing with freshmen. I’m dealing with guys that last year were all starting on special teams and now they’re starting on defense and I have them on one special teams. Man that’s just…shoot I was nervous coming in and talking to all of you. I think nerves are part of it. I love it. Who was it? I think John ‘Bones’ Jones said ‘you get the butterflies, the key is to fly in formation.’ If you’re not nervous and anxious I don’t think it’s important to you.”

On whether he uses the fact that he wasn’t given the opportunity to be an on-field coach at Alabama as motivation…
“You can use anything for motivation. To me, the question goes deeper. I think Coach Saban has my back; I worked for him for 18 years. If the position would have been open [at Alabama], it probably would have been a possibility. For me, I wanted to work with Coach Smart. I wanted to work with somebody who I see eye-to-eye on with a lot of things. I see the same with Coach Saban, obviously. I wouldn’t be here without him, but with Coach Smart, I feel like there’s a big emphasis on some things that I’m big on.”