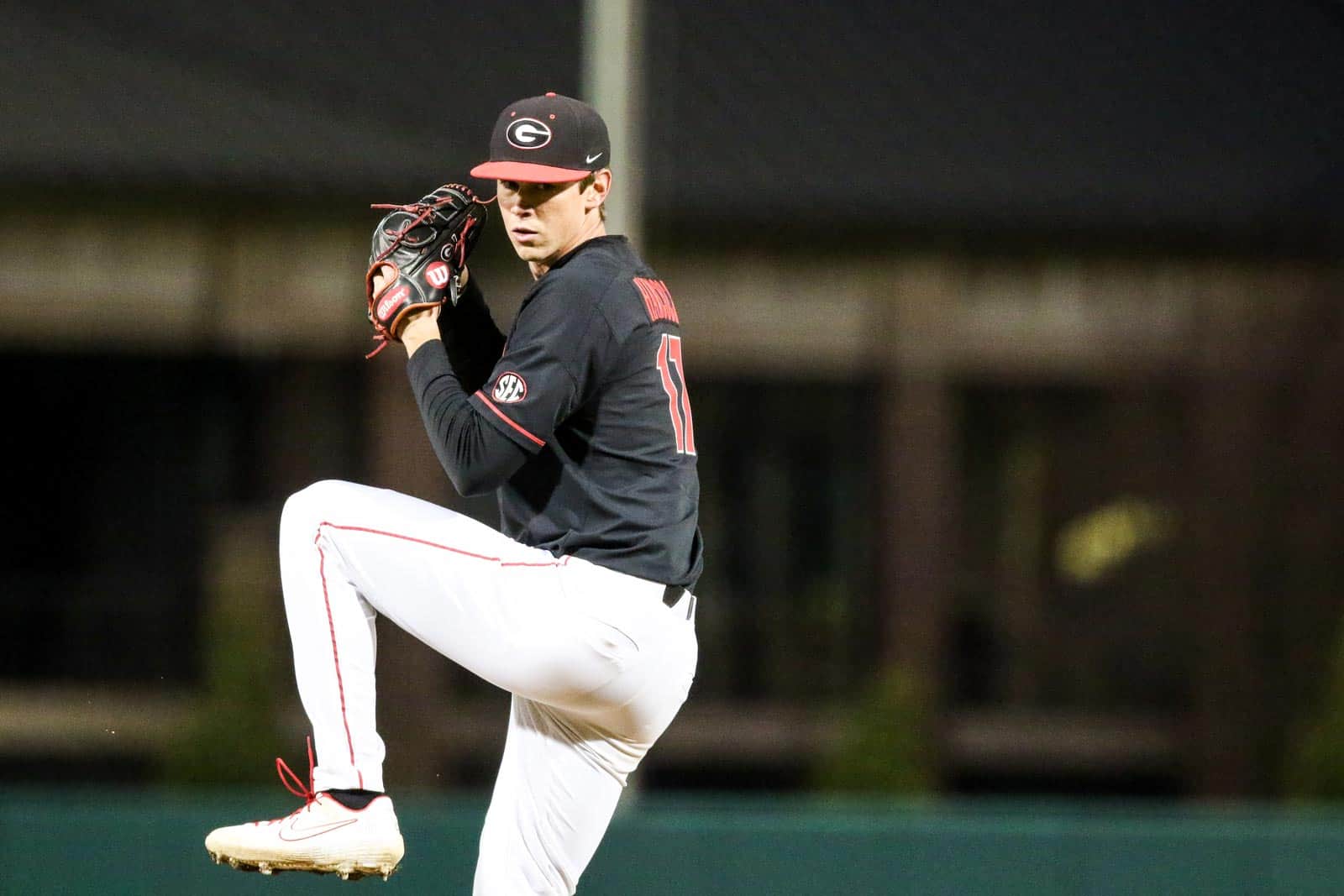 ATHENS, Ga. – Seven former Bulldogs have been invited to Major League Baseball camps when official training resumes this week for the 2020 season.

Gordon Beckham, Kyle Farmer, Justin Grimm, Emerson Hancock, Kevin Smith, Jared Walsh and Alex Wood were among the professional players to receive reporting news from their respective clubs this past weekend. All Major League Baseball teams sent MLB the names of the players who will head to training camp Wednesday to resume preparations for the 2020 season. The season will start July 23 or July 24.

Beckham, an infielder who has spent most of his 11-year career with the Chicago White Sox, was among the veterans the New York Mets added to their roster Monday. Last year in a utility role with Detroit, he hit .215 with six home runs in 83 games. He has tallied 80 home runs with 351 RBI during his time in the Major Leagues. Beckham will be among the Mets’ 60-man player pool set to resume workouts Friday at Citi Field. Earlier this year, Beckham was a non-roster invitee with San Diego.

Farmer, a catcher/infielder for the Cincinnati Reds, will be among the 35 players training at Great American Ball Park. The Reds will have an additional 22 players hold workouts at Prasco Park in Mason. Last year, Farmer batted .230 with nine home runs and 27 RBI in 98 games with the Reds. It marked his third year in the Majors after beginning his professional career in the Los Angeles Dodgers organization. He showed his versatility last season in Cincinnati, making starts at five different positions: catcher, first base, second base, third base and shortstop.

Grimm was enjoying a solid debut with the Milwaukee Brewers as a non-roster invitee when the COVID-19 pandemic shut down spring training in March. On Monday, Milwaukee announced the 45 players headed to Miller Park this week for their summer camp. Grimm made his MLB debut with the Texas Rangers in 2012. In his seven-year MLB career, Grimm has served as a starter and a reliever, going 20-23 with a 4.98 ERA and four save in 306 games. He was a key member of the 2016 World Series Champion Chicago Cubs and most recently pitched in the Majors with the Kansas City Royals and Seattle Mariners.

Hancock, the sixth overall selection of the 2020 MLB Draft, has been invited to the Seattle Mariners camp starting this weekend at T-Mobile Park in Seattle. After the Mariners set their regular-season roster, the remaining players will work out at Tacoma’s Cheney Stadium and play some intrasquad games but won’t participate in formal games. For Hancock, it’s an opportunity to “get to work” as he stated he was ready to do after signing his first professional contract. Hancock earned All-American and Academic All-American honors during his Bulldog career. He went 16-7 with a 3.47 ERA in three seasons with 206 strikeouts and just 55 walks in 192 innings.

Smith, a left-handed pitcher, is one of the top ranked prospects in the New York Mets organization. In fact, he earned the 2019 Sterling Award as the Mets Minor League Pitcher of the Year. He was a seventh round selection of New York in the 2018 MLB Draft and has since earned his UGA degree too. He spent his first full season in the minors as a starter in 2019, showing promise in the Class A Advanced Florida State League and then was promoted to Double-A in mid-July. He ranked first among all Mets minor leaguers with at least 100 innings in strikeouts (130), strikeout rate (27.2 percent) and strikeout-to-walk rate (19 percent) and finished second in ERA (3.15). At Double-A Binghamton, Smith posted a 3.45 ERA with 28 strikeouts and 15 walks in 31.1 innings.

Walsh, a first baseman/pitcher, is among the 46 players the Angels will be bringing to camp this week that have Major League playing experience. Walsh, who is on the 40-man roster, made his MLB debut last May. They will be training at Angel Stadium and Blair Field in Long Beach. Walsh appeared in 34 games with 79 at bats and hit .203 with a home run and five RBI. Also of note, he made five appearances on the mound and posted a 1.80 ERA in five innings with five strikeouts.

Wood will be part of the Los Angeles Dodgers player pool of 51 for their camp set to open Wednesday in Los Angeles. In early March, Wood was poised to be in the Dodgers starting rotation heading into the 2020 season. He has spent seven seasons in the Majors, going 53-43 with a 3.40 ERA in 179 games including 136 starts. Wood had returned to Los Angeles where he played from 2015-2018 after battling injuries during the 2019 campaign with Cincinnati. The first workout is scheduled for Friday at Dodger Stadium.

Teams can have as many as 60 players in their player pool for the season, and 30 of those will make up the initial Opening Day roster. Then, teams will be required to reduce their 30-man rosters to 28 players after 14 days and then to 26 after 29 days of regular-season play. All other players will be on a “taxi squad,” aiming to stay ready at a separate training site from the MLB club in case they are needed. Players who are part of the 60-player pool but not on the 30-man Opening Day roster won’t receive Major League service time unless they are added to the Major League roster at some point. Some teams announced 60 players while others left a handful of spots open to add later.