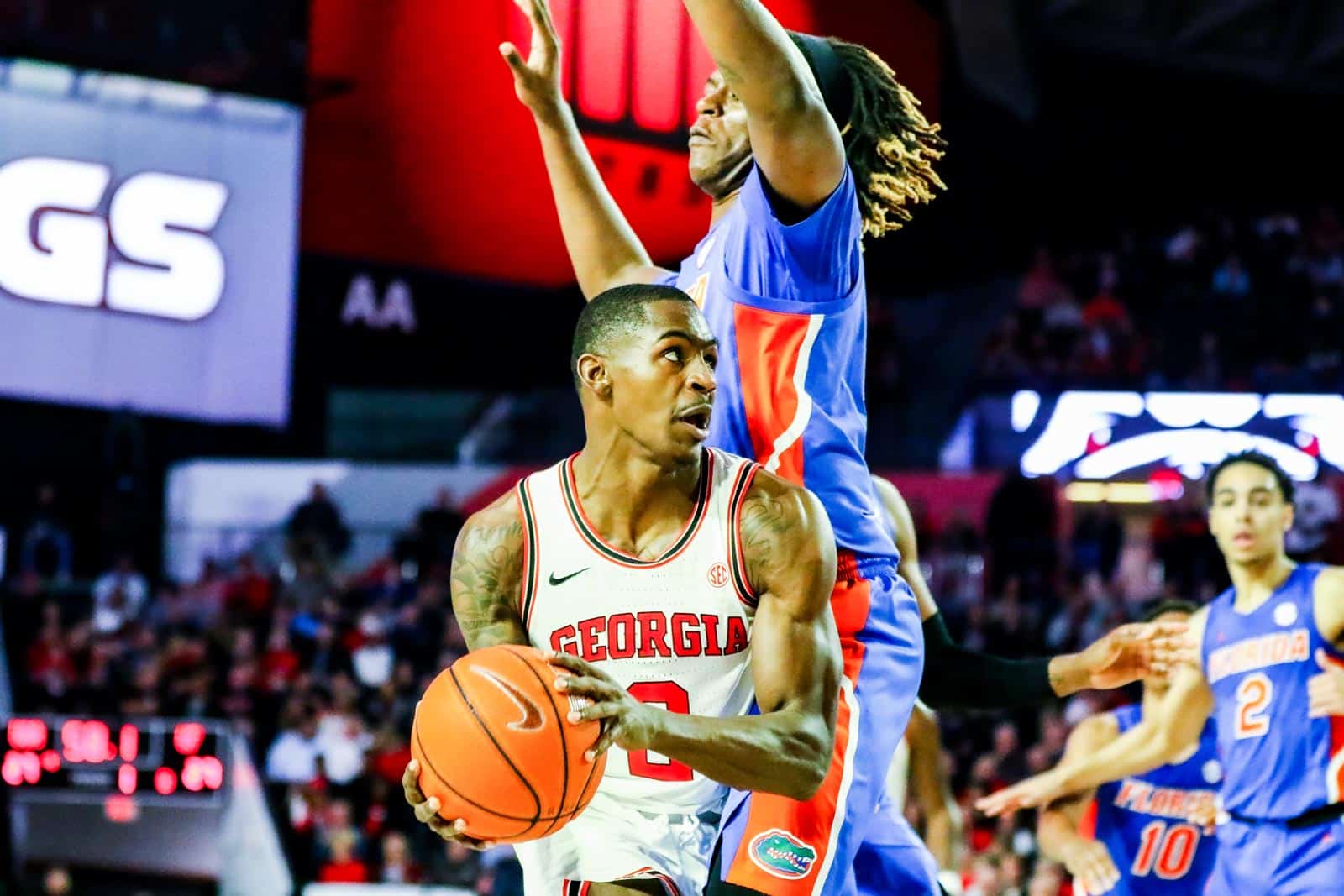 ATHENS, Ga. – The Georgia Bulldogs fell to the Florida Gators, 68-54, in their final home game of the 2019-20 campaign in Stegeman Coliseum Wednesday night. A crowd of 10,007 was on hand for the contest, the Bulldogs’ school-record 11th crowd this season. The Bulldogs finished their home slate with 164,071 fans over 17 games this season, breaking the program’s all-time total attendance record by more than 15,000.

Junior Rayshaun Hammonds recorded his fifth double-double of the season and the seventh of his career with 12 points and a team-high 10 rebounds. Freshman Anthony Edwards paced Georgia in scoring for the 20th time this season with 14 points.

“We have to keep growing, getting better and build the guys that we have,” Georgia Head Coach Tom Crean said. “[We need to] make sure, as we go through this, we focus on the guys who are going to bring us stability and leadership as we move forward in the program and keep growing the guys that we have… Real toughness knows it’s never easy. Toughness that you’re trying to grow has to go through it, and that’s where we are.”

Hammonds got the Bulldogs on the board, accounting for Georgia’s first five points and eight of the first 14. The Bulldogs got off to another hot start, jumping out to the early 14-6 advantage off an 8-0 run to force an early Florida timeout.

Out of the timeout, Georgia continued to extend its advantage, grabbing the first double-digit lead of the night off an alley-oop dunk to senior Jordan Harris, assisted by Edwards. On the ensuing possession, Edwards drained a shot from behind the arc to cap the 13-0 run and gain the 19-6 lead.

Florida answered with an 8-0 run of its own while holding Georgia scoreless for nearly seven minutes to cut its deficit to five (19-14).

A layup from senior Tyree Crump ended the Bulldogs’ scoring drought while the Georgia defense held Florida to no points for over four minutes. Following an 8-0 run, the Gators were able to get within one of the Bulldogs, 23-22, with 3:37 remaining in the opening frame.

For the first time in the contest, Florida knotted the game 25-all with just over two minutes to play. The Gators would tie it once more, but an and-one from Harris regained the lead Georgia would retain for the remainder of the first half. The Bulldogs went into the locker room sporting the 30-28 lead.

After Georgia took a six-point lead in the opening minutes of the second period, Florida was able to tie the game yet again at 40 due to another Bulldogs’ scoring drought. The Gators would then take their first lead of the contest on shots from the line with 11:47 to play.

A basket from sophomore Tye Fagan marked the first Georgia points in nearly six minutes of play. Edwards followed with a one-handed jam to cut the Georgia deficit to one and bring the momentum back to the Bulldogs. Georgia was able to get a defensive stop and an offensive rebound to regain the lead (46-45) on another basket from Fagan.

Florida strung together two consecutive three-point shots as part of a 10-0 run to grab its largest advantage of the game up to that point of nine with just under five minutes to go.

The Gators continued to score, grabbing their first double-digit lead of the contest. Following another Florida 3-pointer, the Bulldogs were unable to overcome their deficit, falling to the Gators, 68-54.

• In back-to-back home contests, freshman Anthony Edwards and junior Rayshaun Hammonds have paced the Dogs with their double-digit scoring nights. Edwards led with 14 points – the 26th occasion of his career with 10-plus points in a single game – while and Hammonds scored 12 points.

• This is the 20th time this season Edwards has led the Dogs in scoring.

• For Hammonds, his points total on the night (12) and 10 rebounds mark his fifth double-double of the season and seventh of his career. Hammonds’ 10 boards was Georgia’s team-high.

• Edwards has tallied 587 points in his freshman season and is the second-highest Georgia freshman in the program’s history. He trails only behind Jack Dorsey (646; 1975) by 59 points.

• Freshman Sahvir Wheeler grabbed six assists during tonight’s matchup, totalling for a season total of 129. He trails behind Litterial Green (1988; 133) by only four assists to become the all-time freshman leader in assists.

• Despite losing the rebounding game to Florida by one board (UF: 30 / UGA: 29), the Bulldogs out-performed the Gators in defensive rebounds with 22 compared to Florida’s 19.

• The Dogs shot 69 percent at the free throw line, going 9-for-13, while the Gators shot 60 percent behind the line.

• Georgia also out-scored Florida in the paint with 30 points compared to Florida’s 28.

On what went wrong…
“It’s always a fear, on Senior Night, that some players try to do too much. The 26 points off of turnovers was a problem for us. We didn’t offensively rebound the ball the first time against Florida. We didn’t offensively rebound it tonight. That was a problem. We just got disconnected defensively. We were doing things that we haven’t been doing…When you’re not connected defensively, it’s very hard for any of the rest of the game to be connected. We didn’t move very well. We scored 40 points in 36 minutes. We didn’t score because we weren’t connected enough defensively to get things done.”

On the fans…
“I appreciate everything wholeheartedly that our fans have done all year. It was a great crowd, we just didn’t give them enough to be excited about tonight…Our fans are fantastic, they really are. There’s going to be proud of us as we go along. These are growing pains.”

On what went wrong for Georgia…
“Florida changed [its] defense and kept changing it the whole game. It was hard to prepare for it because we did not know what was coming at us. That was the biggest thing, how they played their defense today.”

On how Florida messed up Georgia’s rhythm…
“It will mess up your rhythm because it will change what you will do. If they change their defense, we have to change our play calling and what we do. It was definitely frustrating at one point in the game.”

On playing his final home game in Athens…
“It was good and a bitter sweet moment for me. I had a great four years here. [There have been] a lot of ups and downs, but Dawg Nation has always been behind me. It was definitely a fun ride these four years.”

On whether Florida changed any of its offensive game…
“Like Jordan said, they changed their defense. Their defense gave energy, so their offense was able to gain energy too and make shots. It changed everything for them. [Florida] getting in that zone [it was] in, and packing it in, [made it] hard for us to score. We were not prepared for that. It happens.”

On how tough Florida’s game was…
“Its defense was great. The zone defense, like I said – we had no answer for it. We couldn’t do anything for it. We were not prepared for it. There was nothing we could do. If their defense picked up, obviously their offense was going to start hitting shots and getting energy, and the intensity was going to raise. That is what happens.”