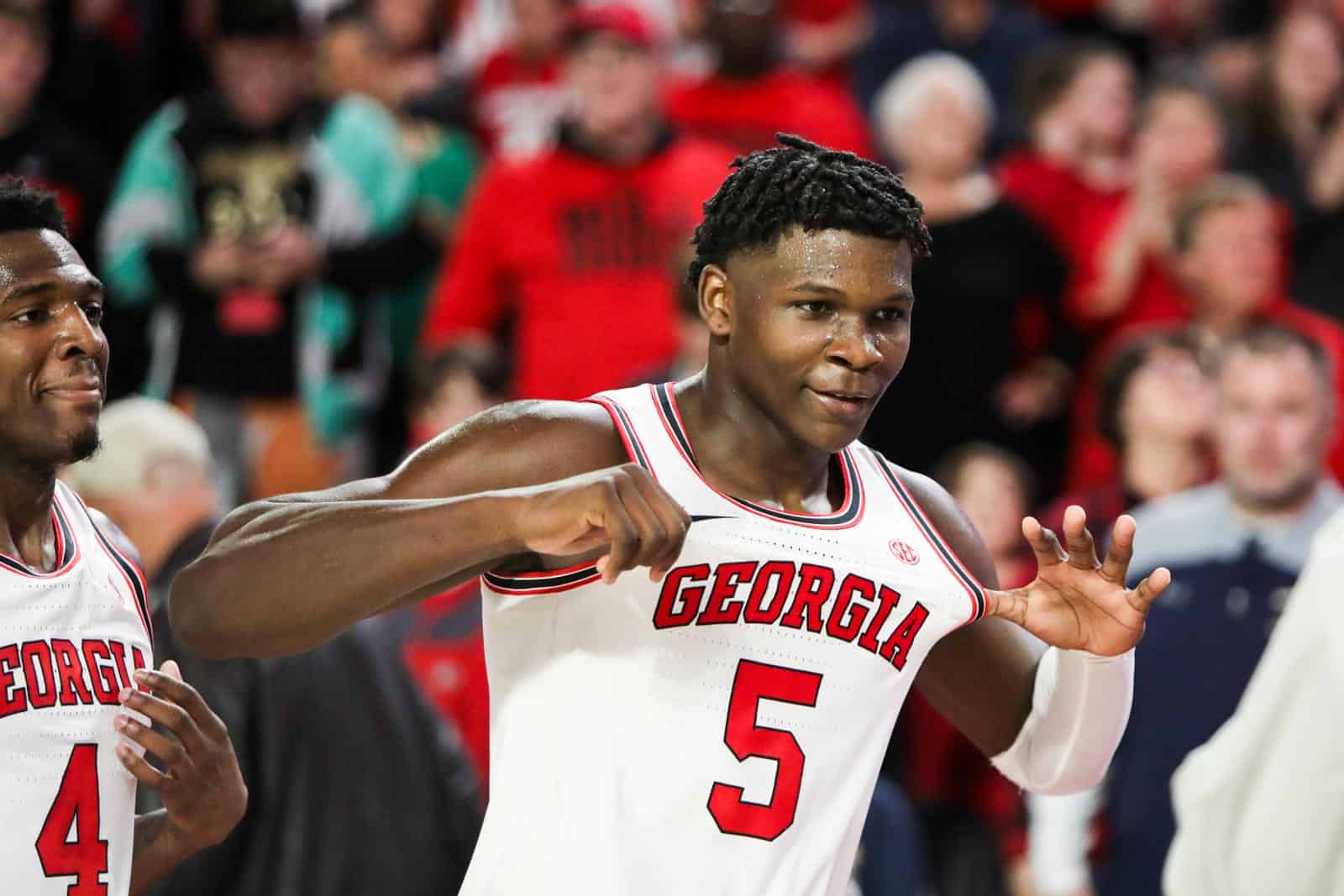 Athens, Ga. – The Georgia Bulldogs defeated the Arkansas Razorbacks on Saturday night, 99-89, in front of a sold-out Stegeman Coliseum.

This crowd officially breaks the program’s all-time total attendance record set in Coach Crean’s inaugural season in Athens, now up to 154,064 fans to surpass the 148,780 set last season. The Bulldogs drew a crowd of 10,000 plus for the 10th this season, surpassing the previous record of nine crowds of 10,000 or more in 2002-03.

“First off, I just can’t thanks the fans enough for setting this record,” Georgia Head Coach Tom Crean said. “I will thank the students again on Wednesday night when we set that student attendance record, and I just found out that we had our 10th game of 10,000 plus which is another school record. We don’t win this game tonight without the fans. We just don’t. Momentum was up for grabs so much inside of this game. We were rolling and then all of the sudden with the fouls it was like the air went out of the building. The air went out of us at the end of the first half. We regrouped and it was a game of runs. It was a game of adjustments. It was an exciting game, trying to figure out different things. At the end of the day, when we had to get the stops and we had to get the finishes, our crowd went to a different level. And that is the way it has been all year. That is what you envision when you have a desire to build a program. You envision fans doing that with you and I can’t thank them enough.”

Led by Anthony Edwards for the 19th time this season, the freshman tallied 26 points. The Georgia victory was a team effort, with six Bulldogs in double figures. Along with Edwards’ 13th 20-point performance, junior Rayshaun Hammonds tallied 22 points, marking the sixth time he has passed 20 points this season and the eighth time in his career. Other Bulldogs in double figures included seniors Tyree Crump (14) and Jordan Harris (11) and freshmen Sahvir Wheeler (11) and Toumani Camara (10).

Edging the Razorbacks on the boards, 40-29, Harris and Hammonds led the way for the Bulldogs with nine rebounds apiece, a season high for Harris.

After Georgia opened the game on a 9-0 run that was capped with a dunk from Hammonds, the Bulldogs forced Arkansas to call an early timeout. Out of the timeout, the Bulldogs continued their scoring streak, shooting a perfect 3-of-3 to extend to the 14-0 lead to force another timeout by the Razorbacks.

Prevented from scoring for nearly all five of the opening minutes, Arkansas eventually got on the board with a three-point shot. However, Georgia continued its impressive shooting throughout the first 10 minutes, shooting 8-of-10 as part of a 6-0 run to grab the 13-point lead, 24-11, with 11:52 to play.

Yet, the Bulldogs continued to extend their lead, grabbing the largest advantage up to that point of 18 as a result of another perfect shooting streak, 4-of-4, including back-to-back shots from behind the arc from Edwards.

Exceptional defense held Arkansas to no field goals for over six minutes. Georgia then experienced a drought of its own, allowing Arkansas to get within single digits for the first time since the opening minutes. The Bulldogs, however, were able to hold onto their lead to head into the locker room ahead, 47-39.

Although Arkansas was able to cut its deficit to three shortly after the half, Georgia went 5-for-7 from the field to regain the eight-point advantage.

Roughly halfway through the second frame, a tip-in from Camara pushed the Bulldogs’ lead back to double digits.

The Razorbacks cut into Georgia’s advantage getting it down to one, 73-72, with 6:28 to play in regulation. Both times Arkansas began to close in on Georgia, Crump came up big with an acrobatic layup.

He also drained a shot from behind the arc with 1:35 to play to make it a two-possession game. Crump ended the night 4-of-6 from the three-point line.

While Arkansas drained a 3-pointer in the final minute, Edwards answered with a jam to ice the game. However, Edwards wasn’t quite done, completing an an-one play on Georgia’s final possession to solidify the 99-89 victory.

The Bulldogs return once more to Stegeman Coliseum to host the Florida Gators on Wednesday, Mar. 4 at 7 p.m. for their final home matchup of the season. Georgia will recognize its three seniors, Crump, Harris and graduate transfer Donnell Gresham Jr. prior to Wednesday’s contest. Those ceremonies will begin at approximately 6:40 p.m.

• Edwards has tallied 573 points in his freshman season and is the second-highest Georgia freshman in the program’s history. He trails only behind Jack Dorsey (646; 1975) by 73 points.

• Playing the most minutes of his senior season (29), Harris grabbed a season-best nine boards to lead Georgia in rebounds.

• This is the 19th time this season Edwards has led the Dogs in scoring. It is the 13th game the standout has scored 20 points or more this season.

• The Bulldogs matched a season-best in first-half scoring against an SEC opponent with 47 points. The last time the Dogs scored 47 in the first frame against a conference foe was against Tennessee on Jan. 15.

• The Dogs put up 50 points in the paint and only allowed Arkansas 30 paint points.

• Georgia out-performed Arkansas on both ends of the court to total 40 rebounds compared to Arkansas’ 29.

• The Bulldogs scored more than twice as many second-chance baskets than the Razorbacks.

• Georgia’s six players with double-digit scores marks the most in SEC play this season and ties the most overall (also The Citadel on Nov. 15).

On what has been the difference the last four games…
“I know a lot of coaches use it, but sometimes you can lose sight of it. It’s a process. If you’re in a process, you’ve got to make progress in it, and I think that’s what these guys are doing. We can never lose sight of the fact that progress has got to be made in practice. Progress has got to be made in how we study film. Progress has got to be made in our X’s and O’s schemes, whatever it is. Progress has got to be made. When you have a young team, you start to focus on two or three things, and maybe you get that in the game, well, maybe you didn’t spend as much time at these two or three things. Then, all of a sudden, it looks like you never spend any time on it. I think we’re starting to work through some of that, whether there’s a little more experience of things. We’re spending so much time trying to get situational basketball down for these guys – whether it’s the opponent, whether it’s what we’re trying to run, whether it’s what we’re trying to come out of a timeout with, the movement and those type of things – that sometimes we lose that ability…now we’ve got to bring it back, and we’ve got to make sure we’re getting the right shot depending on where the game is.”

On his team’s/Anthony Edwards’ ability to maintain composure…
“I’m very proud of them. The ball was moving. Anthony played with his head up. He really did. He scored. He passed the ball. He got to the rim. [He] settled a few times, but that happens. He played with his eyes up, and I think when you’re doing that — when he adds that consistently to his game, playing with his eyes up, not just here and there but eyes up and being able to see and being able to make those decisions like that — that’s another level for him. We ask a lot of him, and I hope nobody is losing sight of how much progress he’s making.”

On Rayshaun Hammonds’ recent strong play…
“I always tell Rayshaun that he is a big part and key to this team. We know what Anthony Edwards is going to bring to the table, but Rayshaun has to bring it every game for us to have a shot. So, when he gets off to a strong start, it gives us a better chance of winning the game. He gets mad at me sometimes, but I always push him because that is what brothers do. I am always in his ear, but if I have to do that to push him, that is what I am going to do. He is my brother, and I love him so much. We have been through a lot together these past three years. Anything I can do to help him, I am going to do. He is always helping me.”

On closing out the game…
“Coach Crean always preaches that you have got to have two 20-minute halves. Take it four-minute stretches at a time. You have to win those four-minute stretches. Then, the last two minutes of the game, you got to close out the game. Coach Crean always says momentum is up for grabs. Basketball is all about runs. If you can stop their runs and go on a run, then you have the momentum, and that is what we did tonight.”

On what has been his inspiration…
“My teammates, being comfortable and confident, and just talking to [my teammates]. Definitely Tyree (Crump) and Jordan (Harris) [because] they have known me the longest and know who I am. They both have seen me play in high school, so they know what I am capable of doing. My coaches just believing in me and stuff like that [is inspiring], and my teammates and my family talking to me everyday.”

On what is the common denominator in the team…
“We have just been confident. You know, playing for each other and being there for each other. When the other team makes its run, we just stay with each other. Earlier in the year, we kind of got frustrated with each other, and now we have grown up the team has seen more.They know more [and] they understand more. They are going to make runs, and we are going to make runs. The main thing is to stay focused.”