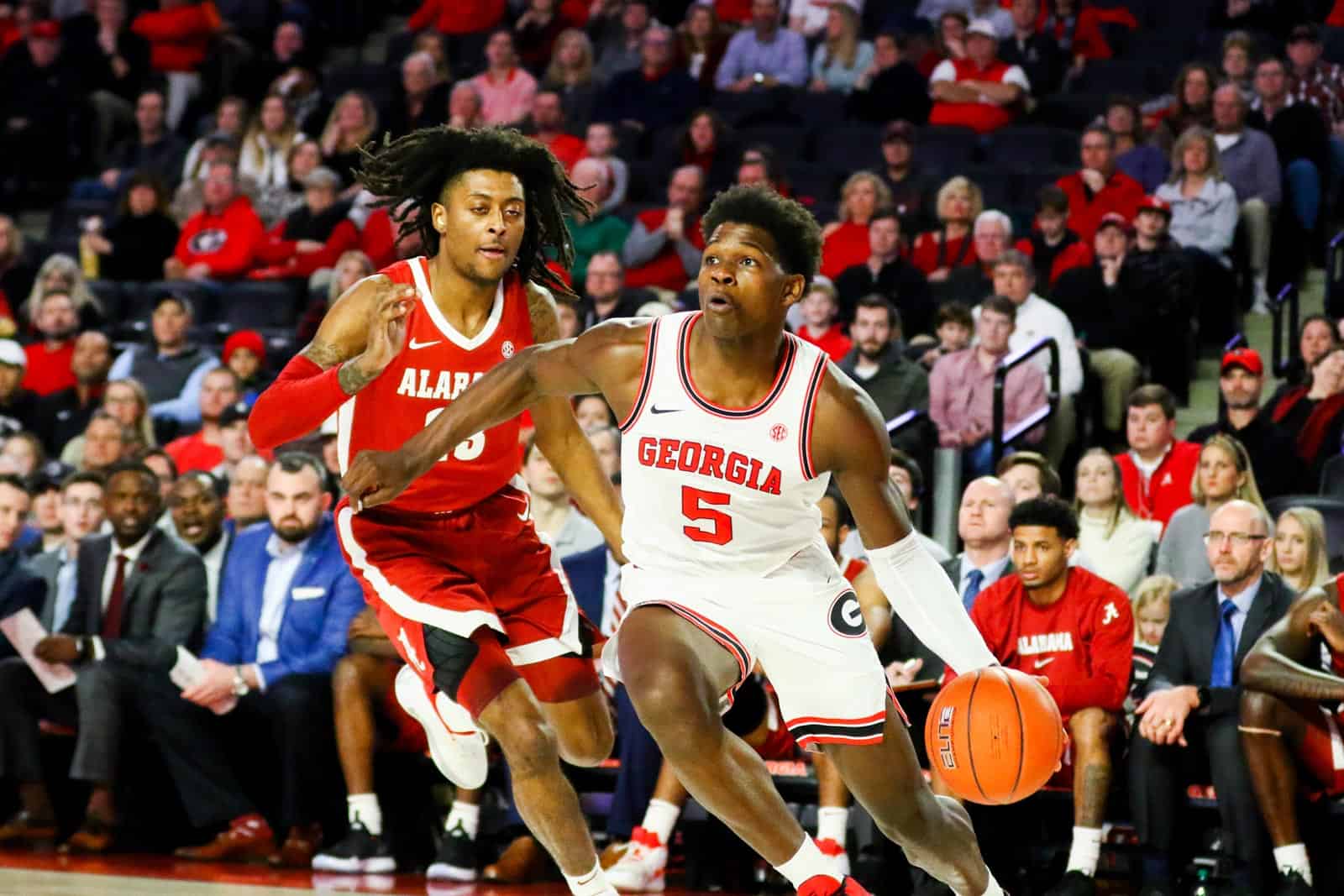 Freshman Sahvir Wheeler had a career-high 24-point performance to pace Georgia in scoring. Freshman Anthony Edwards recorded his third career double-double with 14 points and a team-high 12 rebounds. Other Bulldogs in double figures included junior Rayshaun Hammonds (20) and freshman Toumani Camara (12). This marks Hammonds’ fifth 20-point performance this season and seventh of his career.

Wheeler continued to share the ball well, recording eight assists to become the first UGA freshman with 100 assists in more than a decade. The last freshman to complete the feat was Dustin Ware in the 2008-09 season.

“Our crowd was fantastic,” Georgia Head Coach Tom Crean said. “I’m sorry they’re not walking out of here joyous. They helped keep our energy high, and like I said we did not have that energy in the beginning because Anthony and Rayshaun were dealing with [ailments.] We go as Anthony goes, let’s face it. He’s got a huge leadership role on this team as an eighteen year old because of that energy… I know he’s dealing with a headache and things like that, but to play through it, battle through it like Rayshaun did, those are great things.”

While Georgia opened the game with an early lead, Alabama was able to regain an advantage that they would retain the entire first half with 16:41 to play. Camara and Tyree Crump accounted for Georgia’s first 10 points, tallying six and four, respectively. A three-point shot from Wheeler knotted the game 13-all seven minutes into regulation.

A 2:41 Bulldogs’ scoring drought enabled Alabama to extend its lead to seven. Edwards ended the slump with his first points of the night. Georgia cut its deficit to one, 38-37, with just over two minutes remaining thanks to a shot from behind the arc from Crump.

Though Alabama was able to again extend its lead to six in the final minute, a shot from Edwards sent the Bulldogs into the locker room trailing 45-41.

Out of the locker room, Hammonds drained a 3-pointer on the first possession to get Georgia back within one. The following possession, Wheeler knocked down a three-point shot to push the Bulldogs ahead for the first time since the opening minutes. Edwards followed with a layup to gain the three-point advantage, 49-46. These baskets were all part of the 7-0 Georgia run in under a minute to start the second half.

Wheeler knocked down yet another shot from behind the arc to give the Bulldogs their first double-digit advantage of the contest, 63-53.

The Crimson Tide went on a 15-2 run over 3:11 to regain the one-point advantage, 68-67, halfway through the second period. The game saw back-and-forth action for the ensuing minutes, with two lead changes and two ties.

Despite Alabama pulling away by six with 7:04 remaining, Georgia went on a 6-0 run to tie the game at 83-all.

Alabama never led by more than four in the final four minutes and a jumper from Hammonds tied the game at 92 with 20 seconds remaining. Freshman Mike Peake was able to draw a charge on Alabama’s final possession to send the game into overtime.

Overtime was neck-and-neck with neither team pulling away by more than two for the opening three minutes. Georgia grabbed the early two-point advantage which it held until an Alabama basket with 2:21 remaining gave the Tide a two-point lead.

The Crimson Tide gained the first three-point lead by either team in overtime off a free throw, but Hammonds quickly answered to get back within one. While two made free-throws from Edwards put Georgia at 100 points and within two of the Crimson Tide, the Bulldogs were unable to overcome the deficit, falling 105-102.

Up next, Georgia stays home to host the South Carolina Gamecocks on Wednesday, Feb. 12, at 6:30 p.m. This contest will be televised on SEC Network.

• Edwards upped his freshman-season points total to 452 points, the fourth-most by a Georgia freshman in the program’s history. He combined for 46 points the last two games, including a 32-point showing against Florida to pass K. Caldwell-Pope (422; 2012) and Cedric Henderson (433; 1985).

• With 14 points and 12 rebounds, Edwards grabbed his third-career double-double. He has now had double-digit points in 20 games this season and has finished three games with double-digit rebounds.

• It is Hammonds’ fifth 20-point game of the season and seventh of his career.

• Wheeler’s double-figure scoring performance was his seventh of the season. Tonight’s game marked his first game with 20 or more points.

• Wheeler recorded eight assists to become the first UGA freshman with 100 assists in more than a decade, since Dustin Ware in the 2008-09 season.

• Georgia shot 81 percent (17-of-21) from the free throw line to finish the game, making it the third occasion in conference play the Bulldogs have finished 80 percent or above from the line. The Dogs have now shot above 70 percent in free throws in 7-of-10 SEC contests and 12 occassions total this season.

• The Bulldogs’ 42 rebounds over the Tide’s 37 marks the fifth time in conference play Georgia has outrebounded an SEC opponent.

• This was the sixth of nine SEC games at Stegeman Coliseum to sell out – Kentucky, Ole Miss, Texas A&M, Alabama, Arkansas and Florida.

On Sahvir Wheeler’s shooting performance…
“Sahvir works hard on his shooting. There’s no doubt about that. I always knew ,when we weren’t making shots, that we would make shots. Sahvir did a really good job, and he’s also in the lane penetrating, as is Anthony [Edwards]. We just didn’t get enough from that. Sahvir is working really hard to improve.”

On the crowd helping out a team ‘under the weather’…
“Our crowd was fantastic. I’m sorry they’re not walking out of here joyous. They helped keep our energy high. Like I said, we did not have that energy in the beginning because Anthony and Rayshaun [Hammonds] were dealing with [ailments]. We go as Anthony goes, let’s face it. He’s got a huge leadership role on this team as an 18-year-old because of that energy…I know he’s dealing with a headache and things like that, but to play through it, battle through it like Rayshaun did- those are great things.”

On his game tonight…
“[I trusted] myself a little more. My teammates empower[ed] me. The coaching staff empower[ed] me. Seeing results in the gym pay of,f as well, but it is not good enough yet. We did not get a win tonight, but I felt pretty good. [I am] looking forward to using this to get on a winning streak at the end. Hopefully, my teammates will come on with me.”

On losing another double-digit second half lead…
“That is something we have been trying to work on as a team. I think earlier in the year, we were trying to come back from leads, and now that we are noticing that we can get leads, we are learning how to protect leads. We are getting better, day-by-day. It is unfortunate that we are losing a few games because of it, but our guys still believe in each other, and we are looking to get better day-by-day.”

On what goes through his mind when Sahvir [Wheeler] has a game like he did tonight…
“I told him before the game that I was sick so he had to go crazy and that is what he did. He told me he would take care off the offensive part, I would take care of the rebounding so when I got the ball I would get it to him. That is what I did and he took it over.”

On being sick and still playing 36 minutes, how he pushed through and if he had ever played under those circumstances being that sick before…
“In high school I played really sick, worse than this. I was really tired around the three minute mark in the second half. I was super tired, but I knew he wasn’t taking me out. I dug deep and found some energy, I guess.”

On the assumption that he is only playing one college season, and how he is dealing with the struggles in terms of wins and losses…
“I don’t look at it as I am leaving after. I want to come back. These are my brothers. I want to stay as long as I can. We are going to try and win, no matter what our record is. We are going to come out trying to get a win and start a one-game winning streak. I love these guys, so that is how I look at it.”