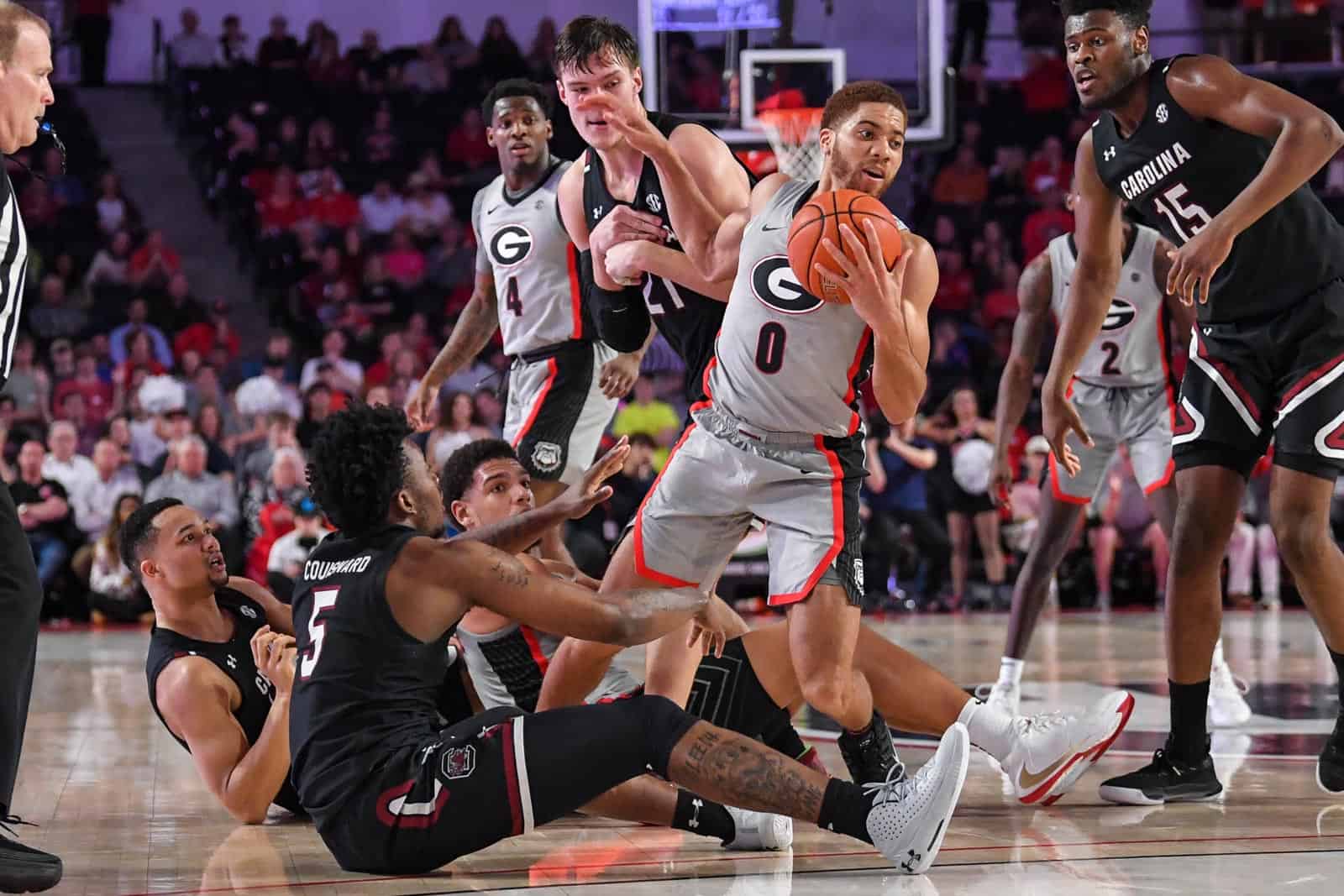 ATHENS, Ga. – The Georgia Bulldogs were defeated by the South Carolina Gamecocks, 75-59, on Wednesday night in Stegeman Coliseum.

Freshman Anthony Edwards paced the Bulldogs in scoring for the 15th time this season. His 16 points marked the 21st double-digit scoring performance of his career. Senior Jordan Harris joined Edwards in double-figures, tallying 10.

South Carolina jumped out to an early double-digit advantage, 13-2, with 13:53 to play. Junior Rayshaun Hammonds scored Georgia’s first field goal of the night after seven minutes of play.

Georgia struggled to score in the first half as South Carolina continued to extend its lead to 15 around the halfway mark. Despite the Gamecocks grabbing a 20-point advantage, sophomore Tye Fagan sparked the Bulldogs with back-to-back baskets.

Georgia tallied a majority of its first half points in the final ten minutes with baskets from Fagan, Edwards, Harris and graduate transfer Donnell Gresham Jr. The Bulldogs ended the half going 5-for-8 to head into the locker room trailing, 38-20.

A 6-0 Georgia run capped by a layup from Harris with 12:22 to play in the second half brought the Bulldogs within 16 of the Gamecocks.

Shortly following, Gresham Jr. drained a three-point shot despite being fouled. Gresham Jr. completed the four-point play to bring the Bulldogs with 14, but they were unable to cut into the gap further.

Despite a shot from behind the arc from Crump bringing Georgia within 18 of the the Gamecocks in the closing minutes, the Bulldogs were not able to overcome the deficit, falling 75-59.

Up next, Georgia travels to College Station for an SEC rematch with the Texas A&M Aggies on Saturday, Feb. 15, at 3:30 p.m. The matchup will be televised on SEC Network. The Bulldogs return to Stegeman Coliseum next Wednesday, Feb. 19, to host the Auburn Tigers at 7 p.m. This contest will be aired on ESPN2.

• Freshman Anthony Edwards paced the Dogs with 16 points. It marks his 21st double-figure scoring game of his college career.

• Senior Jordan Harris scored in double-digits for the third time this season. Harris was 4-of-6 from the field to tally 10 points on the night.

• Edwards upped his freshman-season points total to 468, the fourth-most by a Georgia freshman in the program’s history. He trails behind Litterial Green (481; 1989) by only 13 points to be the third-highest scoring freshman Bulldog of all time.

• Georgia finished 77 percent (20-of-26) at the free throw line against the Gamecocks. This includes an 80 percent showing at the line in the second half for UGA after going 12-for-15.

• The Bulldogs have now shot above 70 percent in free throws in 8-of-11 SEC contests and 13 occassions total this season.

• For the first time this season, Rodney Howard led Georgia in rebounding with six, which also represents his career high.

• The Bulldogs out-performed the Gamecocks off the bench with 24 points compared to South Carolina’s 15 to finish tonight’s matchup.

• While Georgia lost the rebounding battle to South Carolina, Georgia improved on the boards in the second half to notably cut the deficit. The Gamecocks only had one more rebound than the Dogs (20-19) in the second frame after outrebounding Georgia by 11 in the first half (25-14).

On the game…
“It’s part of the process. It’s part of getting it where it needs to be. It’s not about singling out anyone individually. We didn’t have a guy who was going to set the tone tonight. It has to be collective, just like leadership has to be…It’s the same thing with the toughness level. It’s got to be collective, and it just wasn’t.”

On what South Carolina was doing defensively…
“When one person would drive, everyone would rotate. They’d take charge. It was hard, especially because no one was hitting threes today. My teammates and I- no one could hit the jump shot. [South Carolina] was just sitting in the paint. It was hard. They played really good defense.”

On Georgia’s record…
“To be honest, I love my teammates. I am playing for them and my family. Other than that, there is not too much I can say.”

On tonight’s performance…
“They just out-played us. In every aspect, they out played us. That is all I can say.”

On the physicality of South Carolina tonight…
“That is South Carolina. [Physicality] is their identity. They are a tough team, play hard, and deny passes. They make everything hard. They definitely had the size advantage, but they just played harder than us tonight.”

On whether the team lost confidence after early missed three-pointers…
“No, we just have to stick to our technique and keep trusting our shot. If we are open, we have to shoot them. Even if you are in a slump, there is no way you can get out of a slump if you cannot shoot the ball. You have to keep shooting every open shot you get.”