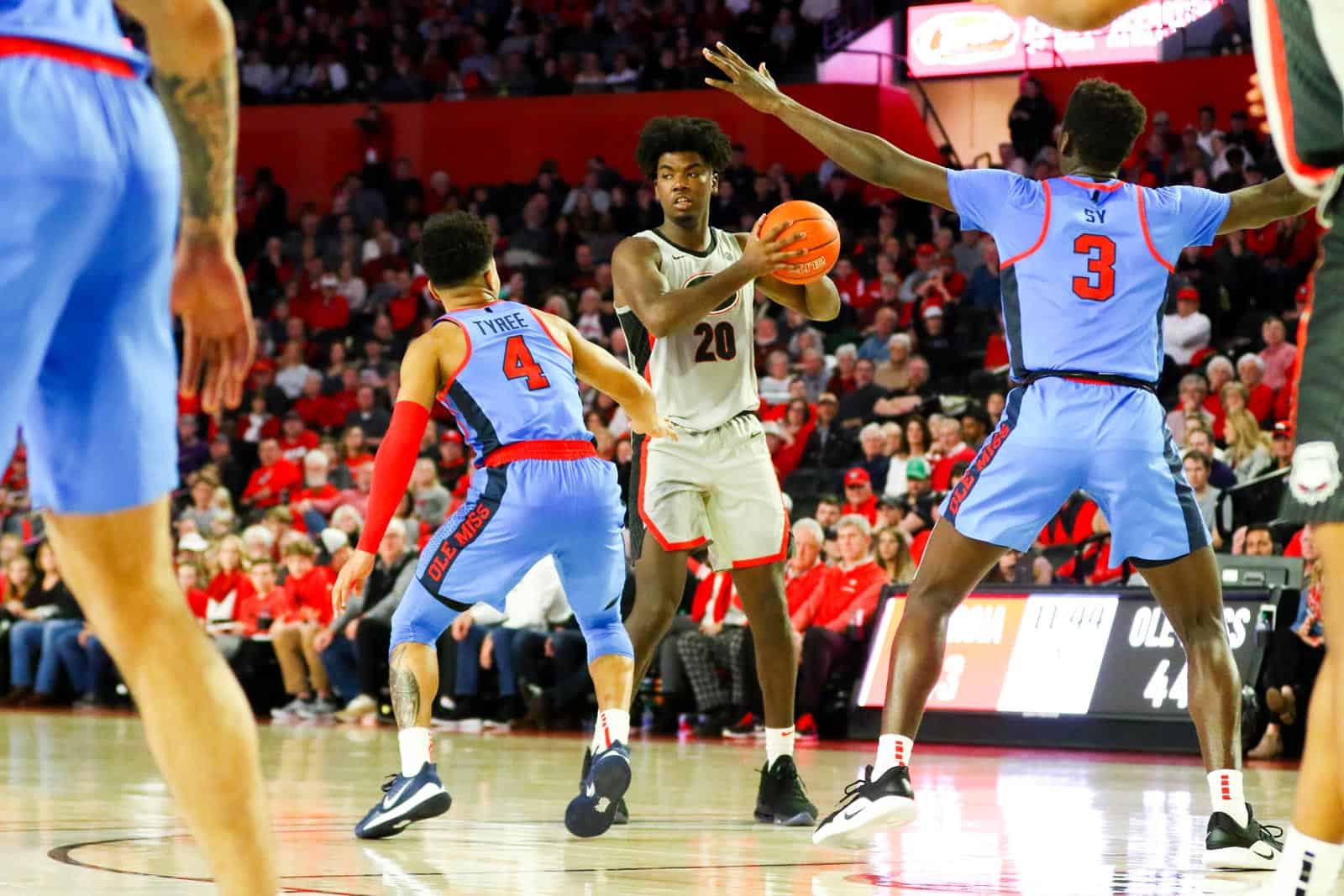 ATHENS, Ga. – The Georgia Bulldogs were defeated by the Ole Miss Rebels, 70-60, on Saturday night in front of a sold-out Stegeman Coliseum.

Senior Jordan Harris paced the Bulldogs in scoring and rebounding, recording season-highs in both with 15 points and eight boards. Harris also tied a career high in blocks (2) and tied a season highs in steals (3). Joining Harris in double figures were freshmen Anthony Edwards and Sahvir Wheeler, who tacked on 13 and 10 points, respectively.

Georgia dominated on the glass. For the ninth time this season and the sixth time at home, the Bulldogs won the rebounding battle by a 38-28 margin. The majority of these rebounds came on the offensive glass with Georgia tallying 18 compared to five from Ole Miss. This marks the third time the Bulldogs have edged their opponent in offensive rebounds.

“We’re not going to beat anybody shooting the way we shot,” Georgia Head Coach Tom Crean said. “Our defense at times was good, at times not, but the bottom line is our offense over a period of 40 minutes didn’t give us enough chance to win the game. And some, we missed layups, we didn’t finish with contact, we didn’t finish sometimes without the contact. But we have just got to regroup in a hurry and not let a bunch of young guys lose confidence, which I’m certainly not. It’s just a matter of we have just got to continue to get better.”

After Edwards tied the game 8-all on his second three-point basket, Georgia gained its first lead of the night, 11-10, thanks to an and-one from graduate transfer Donnell Gresham Jr. with 15:29 to play in the first half.

Following three lead changes in four minutes of play, Ole Miss went on a 9-0 run to regain the 21-13 advantage halfway through the opening period.

Domination on both ends of the court from Harris, including a block and a 3-pointer, cut Georgia’s deficit to three (21-18) prior to both teams encountering scoring droughts. Ole Miss ended its drought by going a perfect 3-of-3 to extend its lead to eight, 28-20.

The Rebels grabbed the first double-digit advantage of the night, 32-22, with 4:46 remaining. Five-straight points from Harris followed by a two-of-two performance at the line from Edwards chipped away at Georgia’s deficit to bring it down to three.

The Bulldogs ended the half on a 2:52 scoring drought to head into the locker room trailing, 35-29.

Out of the locker room, Ole Miss quickly regained the double-digit advantage of 11, tying its largest lead of the contest.

The combination of a 9-0 Georgia run, a 3:52 Rebels’ scoring drought and three Ole Miss turnovers brought the Bulldogs within two (40-38) with just under 14 minutes remaining.

Edwards drained a basket from behind the arc to mark Georgia’s first advantage, 43-42, since 13:39 to play in the first half. Less than a minute later the Rebels reclaimed a lead they would hold onto for the remainder of the game. Despite the Bulldogs getting back within one on two different occasions, Georgia fell to Ole Miss 70-60

Up next, the Bulldogs are back on the road, traveling to Columbia to take on the Missouri Tigers on Tuesday, Jan. 28, at 8:30 p.m. The matchup will be televised on SEC Network. The Bulldogs will return home to another sold-out crowd when they host the Texas A&M Aggies on Saturday, Feb. 1, at 1 p.m.

• Edwards has now seen double-figuring scoring nights in 16 of 19 games this season.

• Harris’ two blocks were a team-high and also matched the senior’s career-best.

• Both teams finished 76 percent from the free-throw line. Georgia scored 19-of-25 from behind the line, while Ole Miss recorded 13-of-17.

• The Bulldogs out-rebounded the Rebels 38-28. Georgia dominated most offensively, grabbing 18 while only allowing Ole Miss five.

• Tonight’s game marks the ninth time overall this season and sixth time at home the Bulldogs have out-rebounded their opponent.

• Heading into halftime, Georgia nearly doubled Ole Miss in rebounds with 20 compared to the Rebels’ 11.

• UGA reclaimed the lead with 12:20 remaining in the game after trailing since the 13:29 mark of the first half.

• The Bulldogs held the Rebels scoreless for over five minutes in the second half.

• Tonight’s matchup was the second sell-out at the Stegemam Coliseum of the 2019-20 Bulldog season. Four of Georgia’s remaining six home games also are sold out.

On the steps Georgia has to take to turn the team’s performance around…
“We rebounded pretty well today. We just didn’t get it a lot of finishes. We had 18 offensive rebounds. That’s a high number…We’ve got to finish better around the board [and] we’ve got to be confident in our shooting. The last thing they need from me is to lose confidence in them shooting the ball…We missed some shots that you’ve got to make. The margin for error is very, very small against any team in this league, and that’s what it was as much as anything else…When you give up the first dribble, that’s where all the problems come. Alot of times tonight we did that, but the bottom line, for us, is we didn’t put enough pressure on them with our driving game, and we didn’t put enough pressure on them with our cutting game. Therefore, there was more of a challenge. At the basket, we made some passes and things of that nature, but there was more traffic at the rim, rather than us loosening it up because we wer

On guarding the dribble and the issues Georgia had with it tonight…
“We didn’t go zone a lot because these guys [on Ole Miss]. Charting Breein Tyree through the league and through the last five or last four non-conference games, his numbers were coming on being open. He can get to the rim [and is] pretty good getting to the rim. When you lose him, he makes you pay. They had some other guys like [Devontae] Shuler and [Blake] Hinson who were a little bit of a struggle [and] who are really good, especially in Hinson’s case- -good catch-and-shoot shooters. We wanted to switch a lot. Sometimes we did a good job of that, sometimes we didn’t. Our guards did a poor job defending the post tonight when we switched, and we got caught behind way too much and things like that. We weren’t great defensively by any stretch of the imagination, but our defense was good enough, our offense wasn’t.”

On forcing 3-point shots and not getting to the bucket as much as you wanted to…
“We work on catch-and-shoots, and a couple of them were at the end of the buzzer. It was not really that. I was just not making them.”

On the locker room message after the game…
“We are going to fix it and come back and try to go win at Missouri.”

On teams defending you differently…
“Teams are trying to defend me differently. They are trying to take me out of the game and make other people score. I just have to find ways to help my team win. I thought I was playing really good defense. A lot of substitutions were made (in the second half), and Ole Miss gained its lead back.”

On what was missing on defense…
“Jordan Harris did not play as much in the first half, and we need someone out there 6-5 defending. That is about it.”

On preventing teams from dominating the paint…
“It is hard. We do not have a true five. Jordan Harris is playing the four and guarding big dudes and I am guarding them as well. We just got to be tough and physical.”

On what the team was missing on defense…
“I’d say communication. We need to stick to the gamEplan. I thought we did a good job of scouting this team. We pretty much knew all their ashes and stuff, but we did not execute on the game plan. When there is a lot of athletes on the court, you can kind of make up for mistakes. Against a good team, that is not good enough.”