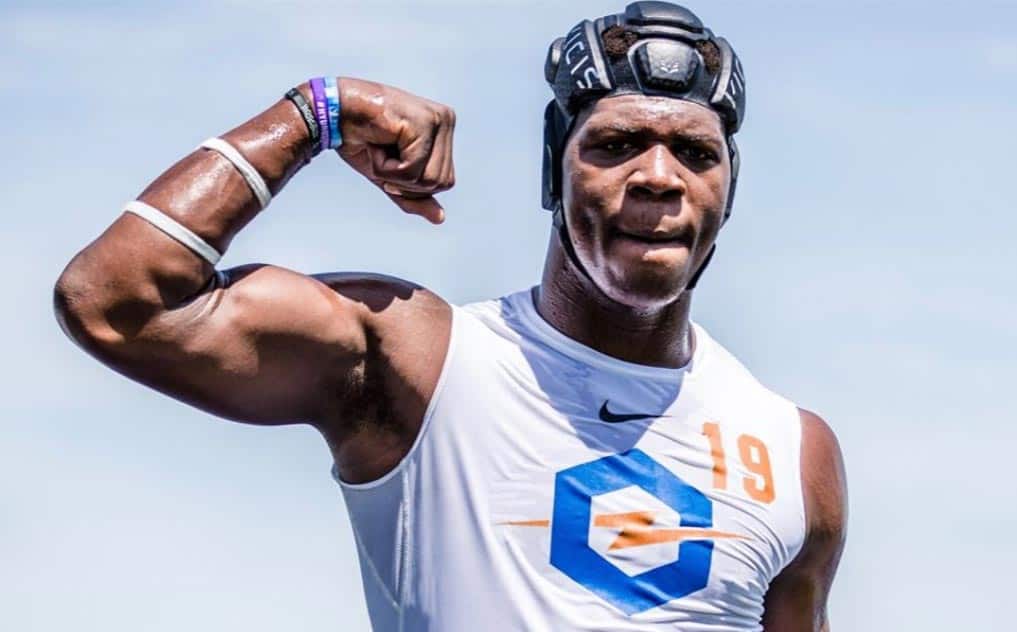 Darnell Washington, a five-star athlete from Las Vegas, Nevada, has committed to the Georgia Bulldogs for the class of 2020.

Washington announced his commitment to Kirby Smart and the Georgia Bulldogs live on ESPN2 at halftime of the Under Armour All-American Game.

5-star athlete/tight end Darnell Washington has committed to the Georgia Bulldogs for the class of 2020! #CommitToTheG #GoDawgs pic.twitter.com/MTiPXSXmc6

Washington, who has reportedly already signed his letter of intent, committed while holding his 8-month old daughter who was wearing a UGA onesie (UPDATE: UGA confirmed the signing of Washington shortly after his announcement. See tweet below).

Darnell Washington (6-7, 260) played for Desert Pines High School. He committed to the Bulldogs over Alabama, Florida, Miami, and Tennessee. He also had offers from most of the top schools, including Auburn, Clemson, Florida State, LSU, Michigan, Nebraska, Ohio State, Oklahoma, Oregon, Penn State, Texas, USC, and others.

In the 247Sports Composite, Darnell Washington is rated as a five-star recruit, the No. 1 athlete, and the No. 10 overall recruit for the 2020 class.

Washington is also rated as a five-star recruit by Rivals.com. They list him as the No. 2 tight end and the No. 17 overall recruit in the country for 2020.

Georgia has now picked up five receivers for the class of 2020. Darnell Washington joins Bulldog signees Jermaine Burton, Justin Robinson, Marcus Rosemy, and Arian Smith, all wide receivers that signed with the Bulldogs in December.