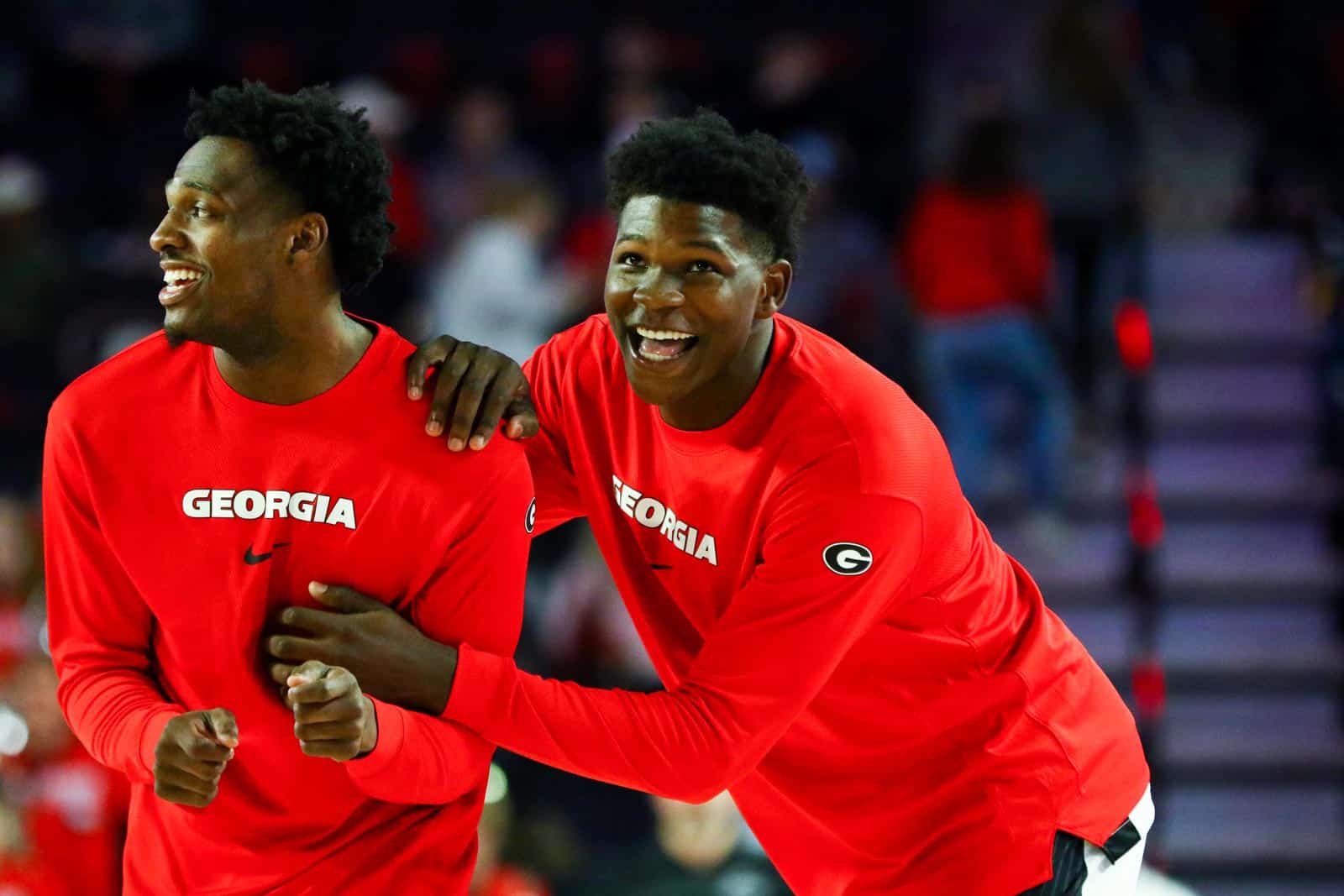 ATHENS, Ga. – The Georgia Bulldogs defeated its in-state rival, the Georgia Southern Eagles, 73-64, on Monday night in Stegeman Coliseum to remain a perfect 7-0 at home this season.

Exploding in the final minutes of the game, freshman Anthony Edwards paced Georgia in scoring yet again with 23 points. This was the sixth time Edwards led the Bulldogs and also the sixth game of 20-plus points. Freshman Toumani Camara also ended the night in double-figures, notching a career-high 16 points on a perfect 8-for-8 shooting performance from the field. The Last Georgia player to finish a perfect 8-for-8 was Jonas Hayes against Florida A&M on Dec. 5, 2003.

Behind a team-high 10 boards from junior Rayshaun Hammonds, Georgia garnered a slight rebounding advantage over Georgia Southern, 38-36. Hammonds was also two points shy of the sixth double-double of his career.

“I thought we had a really good couple days of preparation and practice, an excellent walkthrough, and then at the end of the day we just got going,” Georgia Head Coach Tom Crean said. “We were not as good in the first half and had some guys on fumes. We have a responsibility right now to compete at a high level for 40 minutes and we want to reward the fans who were unbelievable. In the second half, we had some guys that got hot with Donnell [Gresham Jr.], Jordan [Harris], Toumani [Camara], Sahvir [Wheeler], and the way Anthony [Edwards] played coming back in. We won this game because we had 27 deflections and out-rebounded Georgia Southern by four in the second half. Those are the things that made the difference.”

In under three minutes, Edwards scored seven of Georgia’s first 10 points before picking up his second foul. Defensively, the Bulldogs held the Eagles scoreless for nearly three minutes of play to open the game.

With eight minutes remaining in the first half, Georgia Southern was able to get within three of Georgia thanks to a shot from behind the arc. The Eagles gained their first advantage of the contest the following possession, 23-22.

A three-point shot from Edwards propelled him to double digits with 5:38 remaining in the opening half and extended the Bulldog lead back to four. Georgia Southern gained the one-point edge once again on an and-one with 3:22 left to play. Neither team led by more than four, which the Bulldogs did twice, for the final 10 minutes of the first frame.

The combination of a 7-0 run by the Eagles and a 5:07 scoring drought for the Bulldogs sent Georgia into the locker room trailing by three, 32-29.

The Bulldogs quickly regained a one-point lead within a minute out of the locker room thanks to baskets from Hammonds and Camara. After Georgia Southern went three-for-three in under a minute, it was able to grab its largest lead of the matchup, seven, with 17:11 to play.

Camara sparked a 6-0 Georgia run, recording back-to-back dunks to cut the Bulldogs deficit to two on two different occasions. Shortly following, freshman Sahvir Wheeler came in clutch yet again, draining back-to-back baskets to tie the game and then regain the two-point Georgia lead, 55-53, with 8:36 remaining. This was the first advantage for the Bulldogs since 19:12 in the second half.

The final minutes were a back-and-forth battle consisting of four lead changes and two ties. After grabbing a slight one-point edge with 4:23 to play, a jam from Edwards solidified the lead that Georgia held onto for the remainder of the contest. Eight straight points from Edwards in two minutes propelled Georgia to its largest lead up to that point of nine, 69-60, with 1:48 to play. Those eight points plus a layup from graduate Donnell Gresham Jr. were part of a 10-0 run for the Bulldogs over 2:35. With 23 seconds remaining, a layup from Edwards sealed the 73-64 Georgia victory.

Following the week-long break for Christmas, the Bulldogs will host Austin Peay Monday, Dec. 30, at 7 p.m. The contest will be televised on SEC Network +.

• Georgia improved its undefeated record at Stegeman Coliseum to 7-0 with a 73-64 win over Georgia Southern on Monday night. With the win, the Bulldogs improve to 12-4 all-time against the Eagles.

• Freshman Toumani Camara notched a season-high 16 points on an 8-of-8 shooting, the first UGA player with that exact clip since Jonas Hayes vs. Florida A&M in 2003. Camara is the first SEC player to achieve that feat this season, and his performance ranks tied-third in a single game among Power-5 players.

• Fresh off a game-winning layup vs. SMU that earned him SEC Freshman of the Week honors, Sahvir Wheeler captivated the Steg once again. With the team trailing 51-44, Wheeler assisted a Camara alley-oop, muscled a layup and nailed a pull-up jumper to give the Bulldogs a 55-53 lead with 8:40 left, their first lead since the 18:54 mark. All told, Wheeler finished with eight points, seven assists and four rebounds.

• Anthony Edwards led the Bulldogs for the seventh time in 11 contests this season. The nation’s top-scoring freshman hit the first three shots of the game for seven points in three minutes. After early foul trouble, Edwards stormed back in the second half and finished with 23 points on 10-of-20 shooting with four assists also.

• All told, Monday night’s contest tallied 10 lead changes and four ties. Georgia Southern led by as many as seven points in the second half, while Georgia excelled in the final minutes to a 73-64 final.

On how Georgia pulled away late…
“I thought we had a really good couple days of preparation and practice, an excellent walk-through, and then at the end of the day we just got going. We were not as good in the first half and had some guys on fumes. We have a responsibility right now to compete at a high level for 40 minutes and we want to reward the fans who were unbelievable. In the second half, we had some guys that got hot with Donnell [Gresham Jr.], Jordan [Harris], Toumani [Camara], Sahvir [Wheeler], and the way Anthony [Edwards] played coming back in. We won this game because we had 27 deflections and out-rebounded Georgia Southern by four in the second half. Those are the things that made the difference.”

On tonight’s crowd…
“I cannot thank the fans enough. We do not win these games without what they are doing because our kids are working so hard. As a team, we’ve got to grow up and the way we grow up is going through games like today and Friday night, and have the fans help us respond.”

On Toumani Camara adapting to the college game…
“I’m proud of him. He does a lot of different things and we want to keep putting him in different situations. He just makes a difference, he is like a Swiss army knife. Everyone would want a Toumani Camara for Christmas because they would not have to have another tool or buy another set, he just does it all.”

On Toumani Camara’s performance…
“That’s my best friend. I was extremely happy for him. I mean, he played great. He always plays great. He just needed that one game. He just needed some momentum and that’s what we gave him. He did what he had to do.”

On ‘taking over’ down the stretch…
“I can’t really say I took over the game. I’ve got players like Toumani, Sahvir [Wheeler] and coaches like Coach [Chad] Dollar, who scouted the team and gave us the plan to beat them. He did very well in that. My teammates, my brothers, did great on finding me. We did great on finding them. We just had fun and got a team win.”

On any trouble with Georgia Southern’s zone defense…
“I mean, in the first half we just played like we’d never played against a zone before. We were just playing like young, immature basketball players. We were scared. We didn’t play with no heart. We just came in here at halftime and talked as a team. Coach [Tom Crean] came in and gave us the game plan. We went out and put Sahvir in the middle. He did a great job controlling the game, distributing the ball and everything.”

On his performance…
“I think we have a lot of talent, so it might be my game, it might be his [Anthony Edwards’] game, Sahvir another day or Rayshaun [Hammonds] another day … I had a good day today. Everything was going right. I was just motivated.”

On what he sees when Anthony Edwards goes on a roll…
“I mean—to me, he can always get to the rim. He gets to the rim all the time—I keep telling him that: ‘Keep attacking. Keep shooting. Keep doing what you do.’ It’s his game and that is what he does.”