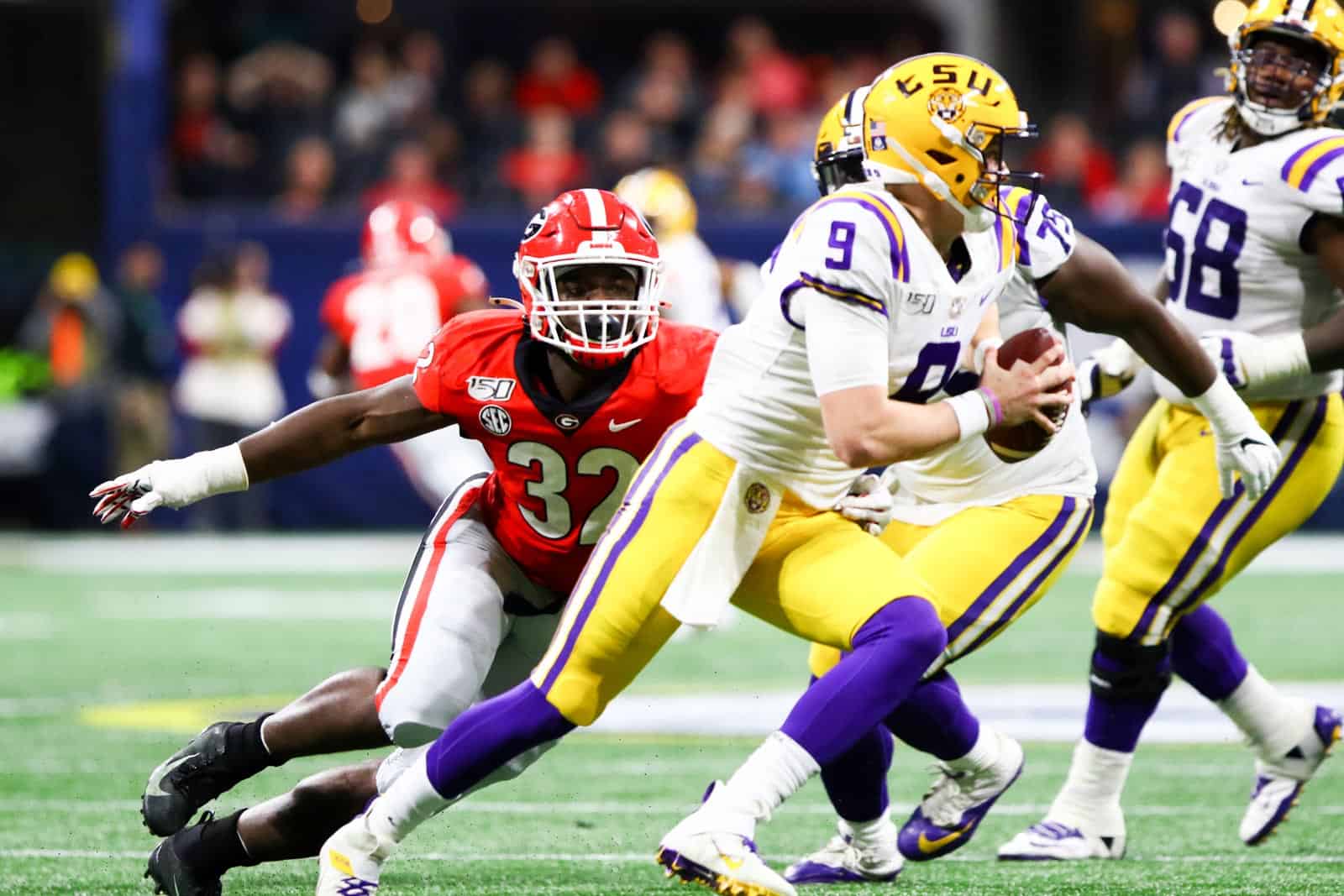 The Bulldogs amassed 286 yards on offense, led by junior quarterback Jake Fromm, who went 20-for-42 with 225 yards and a touchdown. LSU continued its strong offensive season with 481 yards, including 349 from senior quarterback Joe Burrow.

On the opening drive, Georgia neared midfield thanks to an LSU facemask penalty on third down, but a pair of drops stalled the drive. The Tigers moved efficiently on their first possession, bolstered by a 24-yard run by Burrow, who snatched his deflected pass out of the air and ran into Bulldog territory. On the ensuing play, LSU struck first with a 23-yard touchdown pass from Burrow to Ja’Marr Chase, creating an early 7-0 advantage.

After both teams punted, Georgia crossed midfield for the first time as Fromm found freshman receiver Dominick Blaylock for an 11-yard reception on third down, but the Bulldogs came away empty as senior place kicker Rodrigo Blankenship missed from 52 yards out. LSU soon took advantage of the miss, with Burrow finding Terrace Marshall, Jr. for a 41-yard reception, and later, a 7-yard touchdown in the back of the end zone.

In the second quarter, the Bulldogs opened with their most successful drive of the game to date, as Fromm moved toward the red zone with a pair of long completions to senior receiver Tyler Simmons and junior wideout Demetris Robertson, but they would have to settle for a 39-yard field goal from Blankenship to cap a 10-play, 53-yard scoring drive.

Following LSU’s first 3-and-out of the day, Georgia looked to steal momentum, but Fromm was sacked and injured on a safety blitz by Grant Delpit, although he would return on the next possession. LSU once again moved efficiently via the passing game, but freshman linebacker Azeez Ojulari’s third-down tackle of Burrow forced the Tigers to kick a 41-yard field goal by Cade York, bringing the score to 17-3.

Returning from injury for a two-minute drill, Fromm led the Bulldogs to the LSU 40-yard line with two completions, but his ensuing pass was intercepted by Derek Stingley, Jr. at the 13-yard line with 1:39 remaining in the half. With LSU looking to expand its lead, the Georgia defense held strong at their own 30-yard line, forcing three straight Burrow incompletions and a missed 48-yard line field goal, keeping the score 17-3 at halftime.

LSU began the second half with a lengthy 16-play, 77-yard scoring drive that took nearly seven minutes off the clock, culminating in a 28-yard field goal. As they did on the final drive of the previous half, the Georgia defense remained stout in the red zone, including a sack of Burrow by sophomore nose tackle Jordan Davis.

Georgia then embarked on a prolonged possession of their own, running 12 plays over four minutes, including an 18-yard reception by freshman receiver George Pickens on 4th-and-8 at the LSU 35-yard line. Unfortunately for the Bulldogs, the drive proved fruitless as a dropped pass in the end zone led to a missed 37-yard field goal by Blankenship.

Following the missed kick, LSU sealed the game with a pair of quick scores, spurred by a 71-yard pass from Burrow to Justin Jefferson on the first play of their drive. After a touchdown pass to Marshall made the score 27-3, Fromm was intercepted again by Stingley, Jr., allowing Burrow to find Jefferson for an 8-yard touchdown late in the third quarter.

In the fourth quarter, both teams added to their final tallies, with Fromm finding Pickens on a 2-yard pass for Georgia’s lone touchdown of the game, while York notched his fourth field goal, a 50-yard kick.

Georgia will now await its bowl game destination, which will be announced tomorrow afternoon.

*A Look At The Defense:Before today, the Bulldogs and Clemson were the only two teams in the FBS not to allow more than 20 points. LSU registered a 37-10 win as the Tigers came in ranked second nationally in Scoring Offense (48.7 ppg). Georgia was ranked second nationally in Scoring Defense, allowing just 10.4 ppg. LSU claimed a 17-3 edge at the half with 255 yards of total offense (51-rush, 204-passing). The Tigers finished with 481 total yards (132-rushing, 349-passing).

Georgia’s leading tacklers today were graduate J.R. Reed, junior Richard LeCounte, freshman Lewis Cine, all with six apiece. Sophomore Jordan Davis registered a sack of minus seven yards in the second half with LSU in the Red Zone that forced a field goal. DeVonte Wyatt also collected his first sack of the year. A Georgia interception gave LSU the ball at the 13, and it led to a TD and a 34-3 lead

Georgia faced its largest deficit of the year today. The Bulldogs had not trailed in their past six games since an overtime loss to South Carolina. Sophomore wideout/punt returner Dominick Blaylock went down with a knee injury late in the first quarter following an 11-yard catch for a first down. He did not return. Also, Kearis Jackson was limited in the first half due to an ankle injury.

The Bulldogs did convert three fourth down attempts. On a 4th-and-8 at LSU 35, freshman George Pickens caught an 18-yard pass. Brian Herrien caught a 3-yard pass on a 4th-and-three for a first down. Also, Pickens had a 15-yarder on 4th-and-10. Coming in today, the Bulldogs were just 2-for-6 on the year on 4th down.

*Blankenship Supplies A Field Goal And PAT: Graduate PK Rodrigo Blankenship had four points (FG, PAT) to give him 432 for his career. He already owns the school record for career points and ranks second in SEC history. Today, he finished 1-for-3 (missed 52; made 39, missed 37) in field goals. He is now 25-for-31 on the season in field goals. He has tied the SEC record for consecutive PATs as he now has 198 (also Daniel Carlson, Auburn 2014-17).

*Reviewing The Receivers:At the half,senior Tyler Simmons led the Bulldogs with three catches for 40 yards while junior tailback D’Ande Swift had three catches for 18 yards. In the first half, Georgia lost wideout Dominick Blaylock (knee) and Kearis Jackson was limited with an ankle injury. The Bulldogs were already without leading receivers Lawrence Cager (ankle) and freshman George Pickens who missed the first half due to suspension for fighting in the Ga. Tech game. Pickens returned in the 2nd half and had a team-best four catches for 54 yards and one TD. He leads the team with seven TD receptions.

*Big First Half For Camarda: Sophomore punter Jake Camarda (4 for 48.4 average)punted three times for a 54.0 average in the first half and only punted once in the second half  (a pooch for 33 downed at the LSU 12) as Georgia went 3-for-3 on 4th down.He boomed a 65- and a career-tying 66-yarder, today which gives him nine punts of 60+ yards in his career and the longest ever by a Bulldog in an SEC Championship Game. Earlier this year, he also had 66-yarders at Auburn and versus South Carolina.

*Rushing Summary: Senior Brian Herrien had a team-best 24 yards on eight attempts. D’Andre Swift, who was injured in the Ga. Tech game last week, only had one carry for 0 yards in the first half, and then he got the first carry in the second half and gained 13 yards. Those were Swift’s only carries on the day. With Georgia trailing, the Bulldogs turned to the passing game mostly in the second half.

*Points off Turnovers:Georgia did not force any turnovers while LSU scored 7 points off two Bulldog miscues (2 Jake Fromm interceptions; both made by Derek Stingley, Jr.)

*For Starters & Game Captains:Graduate DB Jake Reed now has a team-high 42 consecutive starts for the defense while junior QB Jake Fromm leads the offense with 41 consecutive starts. Graduate Eli Wolf made his first career start for the Bulldogs as they started two tight ends while senior Brian Herrien (TB) made his second career start, both this year (season opener versus Vanderbilt). Wolf made seven starts at Tennessee in his career. Also on defense, freshmen Lewis Cine (DB) and Tyrique Stevenson (DB) both made their first career starts as the team employed seven DB/Safeties.