Rodrigo Blankenship named a finalist for the 2019 Burlsworth Trophy

Rodrigo Blankenship named a finalist for the 2019 Burlsworth Trophy 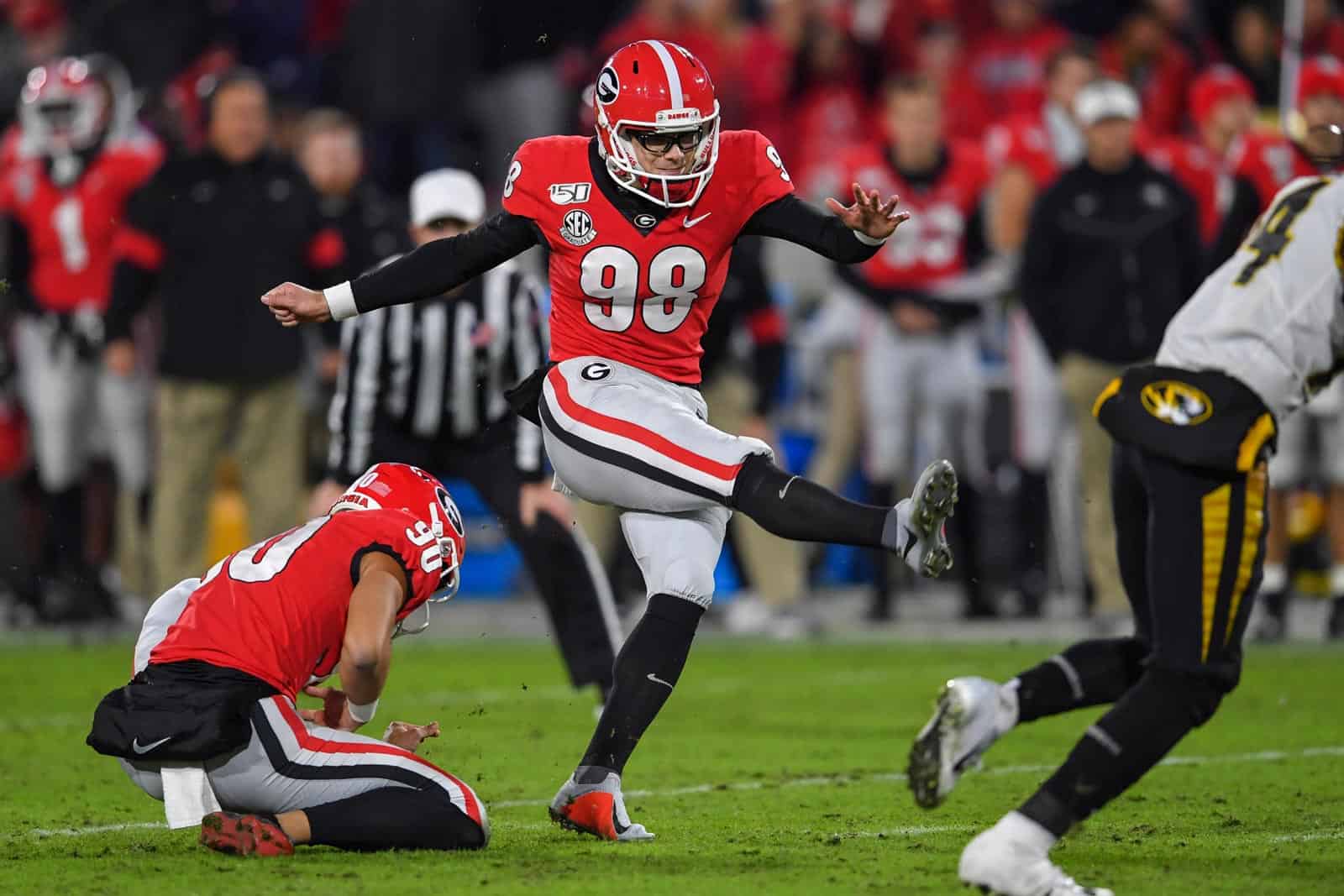 UGA senior kicker Rodrigo Blankenship has been named a finalist for the 2019 Burlsworth Trophy, the Brandon Burlsworth Foundation announced on Tuesday.

Rodrigo Blankenship is one of three finalists for the the Burlsworth Trophy, named in honor of Brandon Burlsworth, former University of Arkansas Walk-On and All-American offensive lineman.

The Burlsworth Trophy is awarded annually to the “most outstanding football player in American who began his career as a Walk-On and has shown outstanding performance on the field. Each nominee must have begun his first season of participation with FBS (D1) football program without financial aid of any kind from his university’s athletic department.”

Below are the three finalists for the 2019 Burlsworth Trophy:

Ashtyn Davis, University of California, Safety/Kick Returner, SR — Davis has recorded 47 tackles this season with 27 solo stops. He has also forced two fumbles, intercepted a pass and returned 12 kicks for 149 yards. Davis, 6-foot-1, 200 pounds, is a four-time All-American in the 60 meter hurdles indoors and the 110 meter hurdles outdoors. He was a second-team midseason All-American selection by Athlon Sports and The Athletic and Davis is on the watch list for the Paul Hornung Award, given annually to the nation’s most versatile player. Davis walked on the Cal track team and after several unsuccessful attempts to contact the football staff, joined the team in the spring of 2016. He was named first-team All-Pac 12 by the Associated Press, Athlon Sports and Pro Football Focus in 2018, recording 56 tackles and an interception with an 89-yard kick return. Davis was recognized as Cal’s top special team’s player in 2016 and 2017.

Rodrigo Blankenship, University of Georgia, Kicker, SR — Blankenship ranks No. 14 nationally and second in the Southeastern Conference in scoring with 92 points and has hit 100 percent of his extra-point kicks this year for the fourth-ranked Bulldogs (9-1). He has made 19 of 23 field goals attempts this season with a long of 50 yards. Blankenship, who started his career as a preferred walk-on, is the NCAA active career leader in field goals with 72. Blankenship, 6-foot-1 and 193 pounds, has hit six field goals of at least 50 yards in his career and as a sophomore in 2017. That season Blankenship secured a scholarship spot on the team and hit field goals of at least 50 yards in the Rose Bowl and National Championship Game. Blankenship holds the record for longest field goal in Rose Bowl history at 55 yards. He is a semi-finalist for the Lou Groza Award, given to the nation’s top placekicker.

Kenny Willekes, Michigan State University, Defensive End, SR — Willekes, a preseason All-America selection and last year’s Big Ten Defensive Lineman of the Year, has 59 tackles this season with 24 solo tackles, including 6.5 sacks and two fumble recoveries. Willekes was named Defensive Player of the Week by the Big Ten and the Walter Camp Football Foundation after recording seven tackles with 2.5 tackles for loss and 1.5 sacks against Tulsa earlier this season. Willekes, named a Burlsworth semifinalist in 2018, did not receive scholarship offers from any Division I schools. He was invited to walk-on at Michigan State, where he redshirted as a true freshman in 2015. Willekes was named a mid-season All-American by Rivals.com in 2019. Willekes, 6-foot-4, 260 pounds, suffered a broken fibula in a bowl game to end last season and rehabbed in the offseason. He is the active career leader in tackles for loss per game (1.22).

The three finalists will be honored and the winner of the 2019 Burlsworth Trophy will be announced on December 9, 2019, at 12:45pm CT at a luncheon in Springdale, Ark., hosted by the Brandon Burlsworth Foundation in conjunction with the Springdale Rotary Club.