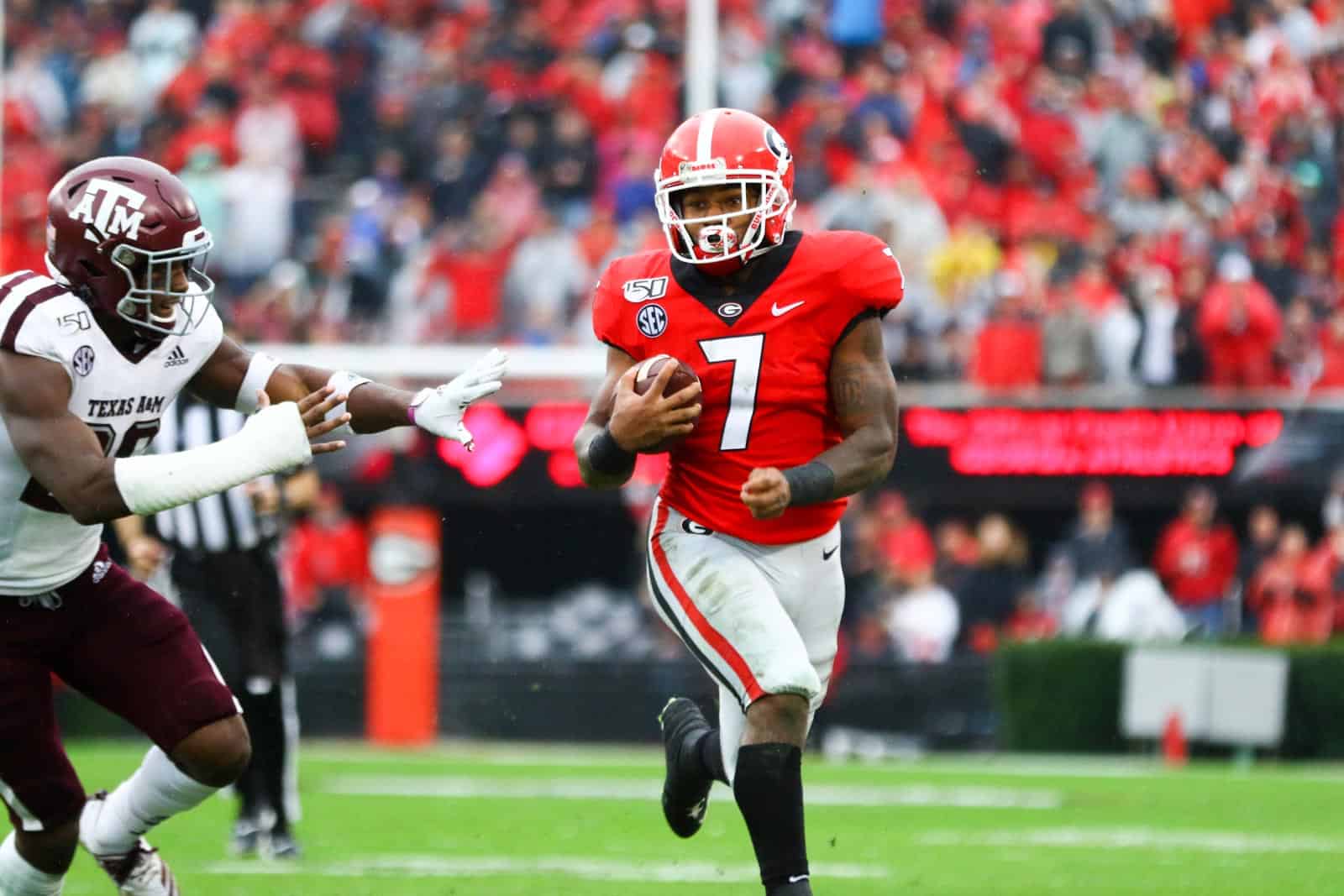 “We make things so complicated,” head coach Kirby Smart said. “If we had cashed in on a touchdown, the game’s over. We just couldn’t put them away. Give them credit, they had us on our heels. It was like Auburn when we were tired. We’ve got to clean things up offensively. We need to run the ball and score some points.”

Blankenship put the Bulldogs on the board with 8:22 left in the opening quarter, connecting on a 41-yard field goal. The field goal was Blankenship’s sixth from 40-or-longer on the season and 20th overall this season, tying his career-best in a season (2017, 20-of-23).

The Aggies knotted the contest on a 37-yard field goal from Seth Small just a minute and 31 seconds into the second quarter.

The following drive resulted in a 49-yard field goal from Blankenship with 11:38 left in the half, giving the Bulldogs the three-point advantage back, 6-3.

Fromm connected with Pickens on a 16-yard touchdown pass, lengthening Georgia’s lead to 13-3 with 6:44 remaining in the opening half. It was Pickens’ fifth touchdown of his rookie season. The scoring drive spanned seven plays over 65 yards highlighted by pass completions to Tyler Simmons (27 yards) and Kearis Jackson (22).

The Bulldogs went to the locker room at halftime holding on to a 13-3 lead over the Aggies. The Georgia defense held Texas A&M to 73 total yards in the opening half including -9 yards on the ground.

LeCounte forced a turnover on the Aggies’ opening drive of the second half, giving Georgia the ball on the Texas A&M 21-yard line. Georgia’s resulting drive ended on a 37-yard field goal by Blankenship, breaking Georgia’s all-time points record, previously 412 held by Blair Walsh (2008-11), and widening the lead to 16-3.

Blankenship began the fourth quarter hitting a 31-yard field goal, bringing the Bulldog advantage back to 13 at 19-6.

Up next, Georgia matches up with in-state rival Georgia Tech next Saturday, Nov. 30. The game will kick off at 12 p.m., noon, on ABC.

*Stingy Defense Leads They Way: Coming in today, Georgia led the SEC and ranked 2nd nationally in Scoring Defense, allowing just 10.5 points per game and third nationally in rushing defense (75.5 yards per game). After today’s 19-13 win, Georgia improves to 10-1 (7-1 SEC) and held the Aggies to 274 yards of total offense (-1 rushing, 275 passing) on 62 plays. It was the first time since 2011 when a team facing the Bulldogs was held to negative yards rushing. Florida finished with minus 19 in Georgia’s 24-20 win in Jacksonville in 2011.

Georgia is one of three FBS teams (Clemson, Ohio State) to not allow more than 21 points in a game this season. The Aggies came in averaging 34 points a game and 434.3 yards a game of total offense (175 on the ground). Georgia led 3-0 after the first quarter. It was the 28th scoreless quarter by the Bulldog defense this year. On the opening drive of the 2nd half, Georgia forced a turnover on a strip by junior safety Richard LeCounte who also recovered the fumble at the TAMU 18. It led to a 37-yard field goal and a 16-3 edge. Later in the 3rd quarter, the Aggies went for it on 4th-and-1 from the UGA 26 and were stopped. Opponents are 6-for-20 (30%) against the Bulldog on 4th down this year. The Aggies cut it to 16-6 with a 35-yard field goal at the 4:14 mark in the 3rd quarter after having it 1st and 10 at the UGA 12. TAMU got its first touchdown with 11:16 left in the contest to close the gap to 19-13, going 10 plays and 75 yards in 3:40.

*Fromm Directs Offense On Another Rainy Day: Junior QB Jake Fromm improved to 33-6 as a starter including 12-5 versus Top 25 teams in this his 39th consecutive start. Georgia tallied 260 yards of offense on 59 plays. At the half, he was 4-for-13 for 72 yards and one touchdown and finished the day 11-for-23 for 163 yards and one TD. He directed the game-clinching drive, running out the final 4:26. In the first quarter, the Aggies had outgained Georgia 39-11, but the Bulldogs led 3-0. Fromm was 1-for-7 until midway through the 2nd quarter when he completed a 27-yarder to Tyler Simmons on a 3rd-and-9 in the 2nd quarter. Then, he followed it up with a 22-yard completion to Kearis Jackson. On the same drive on 3rd-and-11, he connected for a 16-yard TD to George Pickens, and after the PAT it was 13-3. Fromm now has 71 career TD passes, which ranks third in school history. Pickens has a team-high five TD catches on the year. The Bulldogs have won their last five games and have no turnovers in that span.

*Swift Rushing Up The Record Book: Junior D’Andre Swift tallied 103 yards on 19 carries for his ninth career game of 100+ yards. He moved up to seventh in Bulldog history for career rushing yards after a 27-yard run in the 2nd quarter. After today, he has 2,797 yards. Swift added four receptions for 29 yards. Senior Brian Herrien had a season-high 41-yard kickoff return that led to a go-ahead field goal in the first half. He finished the game with 30 rushing yards on 10 carries.

*A Look At Camarda: Sophomore Jake Camarda boomed punts of 54 and 52 yards in a rainy first quarter. He hast 18 punts of 50+ yards on the year. His fourth punt was a pooch of 27 yards, downed at the TAMU 9. He finished today with six punts for an 44.7 average with two going for 50+ and three Inside the 20. Coming in, he ranked second in SEC action with a 49.4 average.

*Up Next:Fourth-ranked Georgia (10-1) concludes the regular season against Georgia Tech (3-8) in Atlanta Saturday, Nov. 30 at Noon on ABC.

On today’s game …
“We make things so complicated. If we had cashed in on a touchdown, the game’s over. We just couldn’t put them away. Give them credit, they had us on our heels. It was like Auburn when we were tired. We’ve got to clean things up offensively. We need to run the ball and score some points.”

On holding A&M to minus-1 rushing …
“That’s awesome, but they threw for a ton. When you can’t run, you can’t win the game. That prevailed, but barely.”

On Rodrigo Blankenship …
“He’s incredible. What a great kid, what a great story. He’s given so much to our university. He’s methodical in what he does and he’s so trustworthy.”

On Jake Camarda …
“Jake flipped the field two or three times. They were huge flips. He’s booming them with hang time and finding corners.”

On the passing game …
“We struggled to be explosive. When we threw it, we threw it well in non-third down plays. On third down, we were very poor. But we did some good things on first and second down.”

On tailbacks D’Andre Swift and Brian Herrien …
“Doesn’t it seem like they sometimes just will themselves to 5-yard gains?”

On the fans …
“The fans were tremendous, especially in the second half. The atmosphere was awesome. The noise affected their communications and was a factor in their delay of games.”

On the offense…
“I always have confidence in my offense. It’s a team, we’re a team. If the offense is slacking, we’ll pick it up on defense. We just always encourage them and motivate them. We just want to have one more point than the other team and that’s all that matters.”

On the fourth down stop…
“It was just an instinct play. They gave us a call. I played the call. I saw the ball and I just went and tackled it. Somebody was there to clean it up. It’s not my play to make, it was everybody’s play to make.”

On the mindset of the offense…
“[Offensive coordinator James] Coley, he comes in on Mondays and we put our goals with what we want to get better with each week. We really emphasize those each day and every way. It’s all about getting better. Coley’s done a great job of just showing us the places we need to get better.”

On the pregame ceremony…
“My mom and sister were here; my auntie, my dad and my brother. They were all out there happy for me. My mom probably cried afterwards. It was just really exciting. It was a special moment … It’s just pure joy to be a part of this and to be a part of a program like this.”