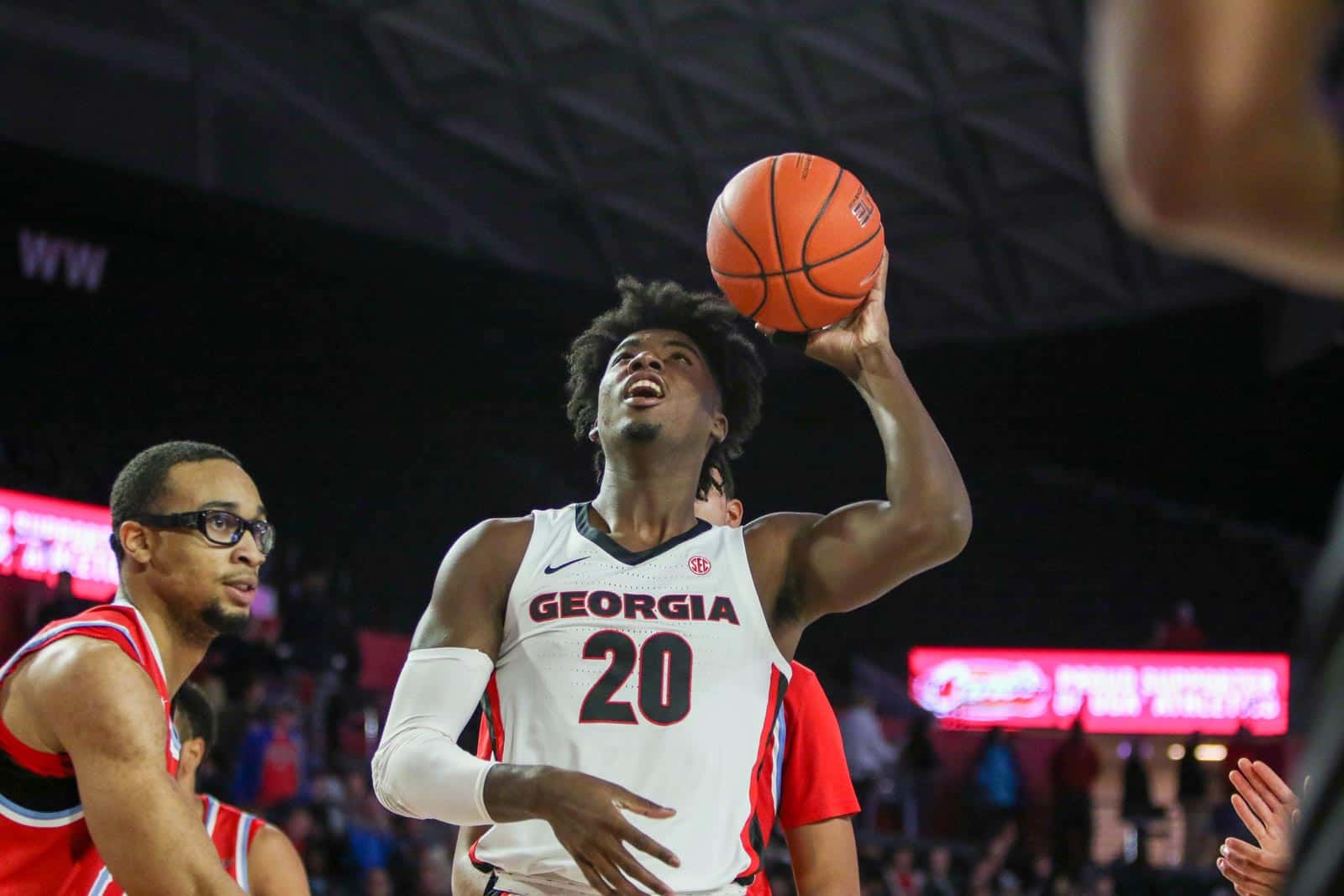 Junior Rayshaun Hammonds shined in multiple facets in the win. His 14 rebounds marks a new career-high and his 26 points notches his third-career 20-plus point performance. He also recorded his third career double-double.

For the first time since 2006-07, the Bulldogs have scored over 90 points in three-consecutive games. This game marks the second time Georgia has surpassed 100 points under Head Coach Tom Crean. The Bulldogs topped two 2018-19 season-highs, improving to 30 assists and 13 steals as a team. The 30 assists stands as the highest one-game assist total since the Bulldogs tallied 32 in November 2006 victory over S.C. State.

In the first six minutes, Hammonds shot 100 percent from the field and three-for-three from behind the line to account for 11 of Georgia’s first 16 points. Hammonds collected 17 points in the first half alone.

The Bulldogs quickly grabbed a double-digit lead over the Hornets with 15:42 remaining thanks to a jumper from freshman Anthony Edwards. Georgia led by as many as 14, 18-4, before Delaware State was able to cut the lead to single-digits.

Despite the Hornets’ effort to stay within 10, a jumper from Hammonds solidified Georgia’s double-digit lead for the remainder of the period.

With freshman Toumani Camara’s shot from behind the arc, the Bulldogs grabbed their largest advantage of the first half, 22, with 35 seconds remaining.

Georgia ended the half shooting six-of-eight and entered the locker room leading by 20, 50-30.

Hammonds remained hot in the second half, hitting three-straight baskets with 15 minutes remaining to surpass the 20-point mark for only the third time in his career. Hammonds ended the night shooting 79 percent from the field.

Georgia went eight-for-eight from the field to grab a 29-point advantage with 11:48 remaining, marking the largest lead of the game.

The Bulldogs continued their dominant performance throughout the second half, never allowing the Hornets within 20, while leading by as many as 30. Georgia shot 64 percent from the field in the second half, scoring 51 points to seal the 34-point victory over Delaware State.

Up next, Georgia concludes its four-game home-stand when it hosts in-state rival Georgia Tech on Wednesday, Nov. 20, at 7 p.m. The matchup will be televised on SEC Network+.

• Junior Rayshaun Hammonds recorded a career-high 14 boards against the Hornets, surpassing his previous career-high rebounds in a singles game (13).

• Hammonds notched his third-career double-double less than halfway through the second half, finishing nearly 80 percent from the field (11-14) with 26 points and 14 rebounds.

• The Bulldogs have scored 90 or more points in three-straight games this season, a feat which hasn’t occurred since the 2006-07 season.

• For the second-straight game, Georgia scored 28 points off of turnovers.

• While Georgia finished the game 60 percent from the field, the Bulldogs increased from a first-half 56 percent FG to 64 percent in the second.

On Anthony Edwards…
“I was really proud of Anthony and in the way he moved the ball. He wasn’t as aggressive with his offense, which was okay, because he was aggressive with driving [the ball], moving the ball and defending. I thought that was a good thing, because it shows the high level qualities he has.”

On getting the ball in the paint…
“I think we’ll be in the 75-80 percent success rate when the ball touches the paint. It’s not necessarily about whether we score in the post or score in the paint- that’s awesome. We want the ball to touch the paint so we can create our reversals, the helps, and so we can get the open threes. That’s what we have to continue to build on, and tonight was the best night we’ve had of that.”

On how much fun a game like tonight is for the team…
“Games like this are very fun. They are sort of like practice. We practice to run the floor, we have a lot of fast breaks. It felt comfortable tonight. Everyone felt comfortable. Everyone got the shots that they wanted. It was just a great game because we all had fun.”

On his teammate Rayshaun Hammonds…
“I fee like Rayshaun was really locked in tonight. Yesterday in practice he had a really good practice. I kind of knew he would have a good game because of the way he practiced yesterday. He came into it with a great attitude and it showed on the floor.”

On the ball movement…
“Once you see that people are getting open shots and good shots, you don’t want to be the first person who looks like he is forcing a shot. So, I guess we saw that in the first half. We didn’t want to be the person who took the bad shot. We just kept swinging until we found the open man.”

On his performance/what having a game like this means to him…
“It felt good. I was pushed in practice [by Coach Crean] to be my best. He gives me challenges. Even when he gets on me I like it because it pushes me. My teammates started getting on me and we push each other so that is just the main focus in practice. I challenge them and they challenge me….[Having a game like this] is a boost. I think of it as just another game to be. Yes it is a boost, but we have more games to play.”

On the defense…
“Coach Linehan had a great scouting report. The whole coaching staff pushed us in practice to be a better defender on and off the ball. They taught us how to talk to each other. We are a young team but are getting better each game. That is what I love about them. Me Tyree and Jordan are the leaders and as the vocal point of the team we try to help them out”.

On the feel of the team…
“We push each other in practice. We always go hard. We get onto each other. When someone makes a mistake they don’t have an attitude. It makes us better every game.”

On his shooting performance in the first game of the season…
“I don’t really focus on that. I focus on rebounding because I could score a lot of points and we could still lose. That is why I try to focus on rebounding and defense. I always try to get better at that.”