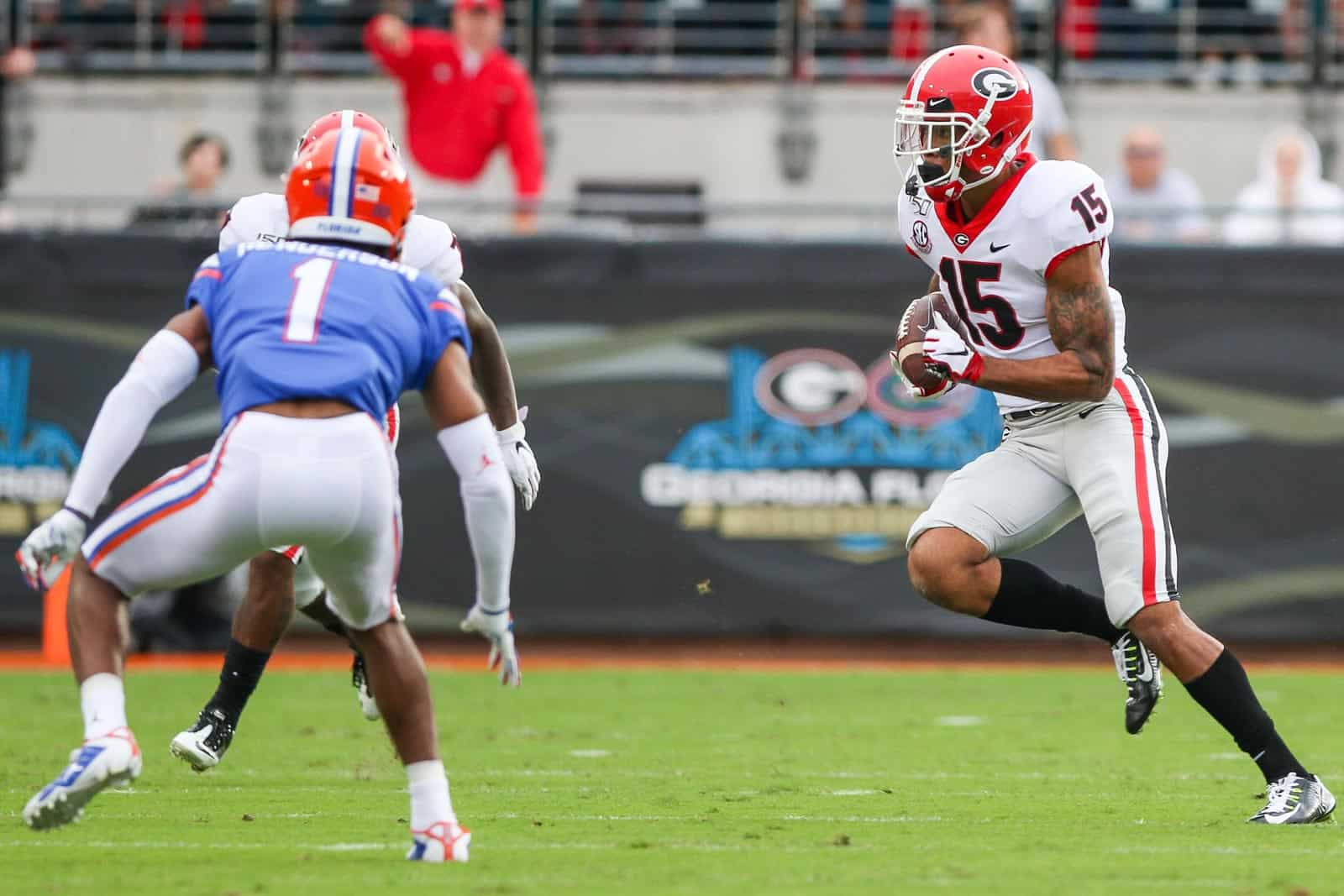 The victory marks the Bulldogs’ first three-year win streak against the Gators since 2011-13. It also improves Georgia’s record this season to 7-1 overall and 4-1 in the Southeastern Conference.

Graduate wide receiver Lawrence Cager had a career day as he set new highs in receptions (7), yards (132) and career-long touchdown catch (52 yards). Junior quarterback Jake Fromm completed 20-of-30 passes for 279 yards and a pair of scores.

Georgia finished the game 12-of-18 on third-down conversions, including a 22-yard reception on a 3rd-and-7 from tight end Eli Wolf in the final minutes of the fourth quarter. The Bulldogs outgained the Gators, 398 to 278, on the day.

“That was a hard-earned win against a good football team,” head coach Kirby Smart said. “Credit goes to these kids who played hard and played with grit. So many people doubted and they never did. I am just happy for these guys in that locker room.”

The Bulldogs gained possession after stopping Florida on a 4th-and-1 on its first drive. Georgia drove down the field and converted 4–of-5 third downs to set up a 31-yard field goal by Rodrigo Blankenship.

Up 3-0, Azeez Ojulari sacked Kyle Trask to set up a 3rd-and-25. The Gators were unable to convert and Georgia took the ball back deep in its own territory. Georgia’s drive stalled at midfield, but the Bulldogs forced a Florida punt on its next possession.

A pass interference penalty on the Gators set Georgia up 1st-and-10 at the Florida 26. The Bulldogs once again were impressive on 3rd downs, converting 3-for-3 on the drive, including a 3-yard TD pass from Fromm to Dominick Blaylock. Georgia was 8-for-10 on 3rd-downs at that point in the game.

Down 10-0, the Gators drove 54 yards in six plays, capped off by an Evan McPherson 38-yard field goal to cut into Georgia’s early advantage.

Following a season-high 27-yard kickoff return from Brian Herrien, Blankenship added another score — this time from 37 yards out to give Georgia a 13-3 halftime lead.

Georgia put together an efficient drive to open the half, highlighted by an acrobatic 18-yard reception by Herrien. Blankenship knocked in his third field goal of the day to give the Bulldogs a 16-3 lead with just under 10 minutes to go in the third quarter.

The Bulldogs’ sizable lead was short lived as the two teams went into the fourth quarter. It took Florida just three plays to score with a 23-yard TD pass from Trask to Van Jefferson. Georgia still led, 16-10.

On the ensuing Georgia possession, Fromm hit a wide open Cager on a 52-yard touchdown strike to give the Bulldogs the answer and the 22-10 lead. Cager was not finished as he caught a pass from Fromm to convert a two-point conversion to give his team a 24-10 advantage.

Florida answered with a 17-play, 75-yard drive capped off by a Freddie Swain to cut Georgia’s lead to 24-17. The Gators’ offense would not the ball the rest of the way as the Bulldogs hung on for the win.

*Series History/Ranked Matchup Again: Eighth-rankedGeorgia’s 24-17 win over No. 6 Florida gave the Bulldogs their third straight win in the series (for the first time since 2011-13) and now the Bulldogs are 4-3 all-time when both teams are ranked in the top 10. This was the second straight year it was a top 10 matchup. The Bulldogs, currently ranked No. 8, lead the all-time series now 53-43-2. Bulldog coach Kirby Smart is 7-3 against top 10 teams in his career including 2-0 this year and 2-0 versus UF when both are in the top 10.

*Scoring Defense: Coming in today, Georgia led the SEC and ranked5th nationally in scoring defense (10.6 points per game). The Gators were held to 17 points (14 coming in the 4thquarter) and and 278 yards of total offense on 52 plays. They came in averaging at least 400 total yards through its first eight games this year.

In the first half, Florida ran 20 plays for 114 yards (8-rushing, 106-passing) and was held to three points as Georgia led 13-3. The Gators were 0-for-4 on third down and finished 2-for-9 on the day. The Bulldogs are fifth nationally in rushing defense allowing just 85.7 yards a game, and the Gators had just 21 yards.

Georgia’s leading tackler wasjunior Monty Rice with nine stops. Redshirt freshman Azeez Ojulari registered a sack for a loss of 10, and he leads the team this season with 4.5 for 35 yards. On the opening possession, UF had 4th-and-1 at the UGA40 and the defense forced an incomplete pass with a breakup by junior Richard LeCounte, ending a seven play, 35-yard drive that took 3:59. Georgia had a 19-yard sack in the third quarter by Jordan Davis and Malik Herring.

In the first half, Fromm was11-for-19 for 103 yards and one TD.  Also, Georgia was 8-for-11 on third downs. The lone TD-drive covered 10 plays and 59 yards in 6:19. On Georgia’s first drive, the Bulldogs went 4-for-5 on third down.  Georgia’s final scoring drive of the first half was setup by a season-high 27-yard kickoff return by senior Brian Herrien and then a 30-yard scamper by D’Andre Swift. It was capped by a 37-yard field goal by Blankenship and a 13-3 advantage. Graduate Lawrence Cager caught a 52-yard touchdown with 10:01 left that gave him seven catches for 132 yards, all career highs.

*Receiving Leaders: Graduate Lawernce Cager enjoyed a career afternoon. He caught a 52-yard touchdown from Jake Fromm with 10:01 left that gave him seven catches for 132 yards, all career highs. They connected on a two-point conversion to make it 24-10. It capped a 7 play, 75-yard drive in 3:50. It was Georgia’s first successful two-point conversion since the 2017 SEC Championship Game win over Auburn.

*Rushing Leader Gets The Win Again:For the 14thstraight year in the series, the team with the most rushing yards got the victory as Georgia outgained Florida 119 to 21. Junior D’Andre Swift had a game-high 86 yards on 25 attempts.

*Blankenship’s Afternoon Graduate PK Rodrigo Blankenship went 3-for-3 on field goals and had 1 PAT with five touchbacks on six kickoffs. The field goals covered 31, 37 and 27 yards. He moved up to sixth in SEC history for Career Scoring with 389 points For the year, he is 15-for-17 in field goals and 68-for-81 in his career.

On the win …
“That was a hard-earned win against a good football team. Credit goes to these kids who played hard and played with grit. So many people doubted and they never did. I am just happy for these guys in that locker room.”

On third downs …
“We played really well on third down on both sides of the ball. When I was on the set of SEC Nation this morning, I told them that would be a key today. We executed well on both side and that really was a difference maker today.”

On no sacks given up today …
“The credit goes to Sam Pittman and Jake Fromm. Sam put in some really good pass protections, and we challenged those guys that they would be put on island. They did a fantastic job.”

On the offense’s performance …
“I am proud of Jake Fromm, those receivers and our entire offense. Those guys at receiver have a chip on their shoulder and did a good job today. There are things we need to do to get better, but it was good to see them play well today.”

On if this win gives his team confidence …
“It certainly helps confidence wise, but this team never lacked on that. We turned all the noise on mute and focused on the task at hand.”

On Brian Herrien’s catch …
“He has unreal ball skills. I was standing right there and thought there was no way, but he made a great catch and that was a huge play in the game.”

On Florida’s last drive that took seven minutes off the clock …
“I thought we should have stopped them on 4th-and-2. We did not get the stop, but our guys played well and did what they had to do.”