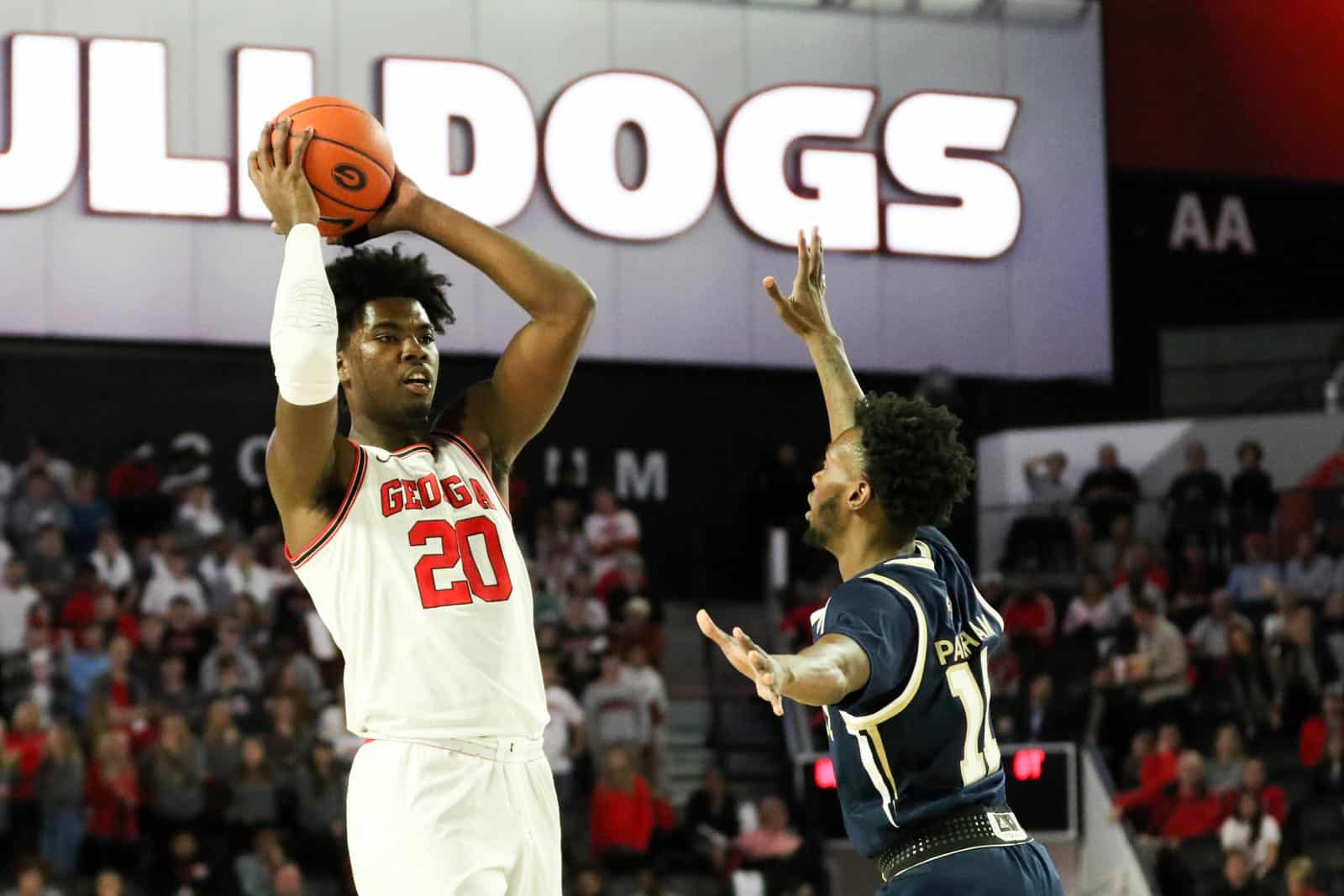 This win ties the second-longest winning steak over Georgia Tech for the third time in school history. Georgia last won five-straight over the Yellow Jackets in a span from 1939-41.

For the first time since J.J. Frazier in 2017, junior Rayshaun Hammonds recorded back-to-back 25 point games. Hammonds tallied 26 points, while grabbing a team-high nine rebounds and two steals. This marks the 36th double-digit game of his career and fourth 20-point game over his three years.

Three other Bulldogs ended the night in double digits, including freshman Anthony Edwards (18), graduate transfer Donnell Gresham Jr. (13) and senior Tyree Crump (11). Edwards has surpassed the double-digit point mark in three of his first four games, while Crump has accomplished the feat in all four games this season.

“We didn’t score for five minutes, but we never panicked,” Georgia Head Coach Tom Crean said. “That’s important because sometimes, what happens when you’re not scoring, is you’re not as locked in and you’re giving up baskets. But we weren’t down very many [points]. I think what happens in these situations is you try to correct what we were doing wrong, especially defensively. The bottom line is we kept coming. We were turning it over some, but we weren’t trying to hit home runs, which is really important. When you’re trying to get back in it by hitting home runs, plays that aren’t there, now you’ve got something to worry about. When you’re playing good, efficient, offensive basketball, you know at some point it’s going to go for you, and that’s what happened.”

Both teams remained scoreless through three minutes of play until Georgia Tech drained a three-pointer. For the second-straight game, Hammonds scored a majority of Georgia’s opening points, accounting for nine of the Bulldogs’ first 10.

Hammonds got Georgia going offensively after five minutes of play. He also gave Georgia its first lead of the game, 8-5, with a shot from behind the arc with 13 minutes remaining.

After almost 10 minutes of back-and-forth play, the Yellow Jackets gained the largest advantage of the half, eight, after a two-minute scoring drought from Georgia to lead 20-12.

Another clutch three-point shot from Hammonds knotted the game 22-all with 6:17 remaining. The shot put Hammonds in the double-digits for the third game in a row.

For the second time in the opening period, a basket from Hammonds propelled Georgia ahead of Georgia Tech, 26-25.

Georgia continued to dominate offensively out of the locker room. The Bulldogs grabbed their first double-digit lead of the game, 37-27, off yet another basket from Hammonds.

After going four-of-five from the field, including layups from Hammonds and Crump and a pair of three-pointers from Crump and Hammonds, Georgia obtained the largest lead of the game, 16.

The Yellow Jackets responded by going six-of-eight and forcing a 2:37 scoring drought for the Bulldogs to get within single-digits (9).

Edwards, entering into double-digit points, scored in the paint to regain the Georgia double-digit lead. A 7-0 run over 1:20 and a 12-2 run over 3:57 solidified Georgia’s lead, tying the largest advantage of the game at 16.

Despite Georgia Tech able to get within single-digits late in the game, the Bulldogs outlasted the Yellow Jackets to seal the 82-78victory.

Up next, Georgia departs for Maui to make its first-ever appearance in the Maui Jim Maui Invitational. The Bulldogs will open the tournament against Dayton on Monday, Nov. 25, at 9:30 a.m. HT/2:30 p.m. ET. The contest will be televised on ESPN2.

• Tonight’s win is Georgia’s fifth-straight victory over Georgia Tech and ties the second-longest winning streak over the Yellow Jackets for the third time in school history. This is the first time the Bulldogs have beaten the Jackets five straight times since a span from 1939-41.

• Junior Rayshaun Hammonds and freshman Anthony Edwards each scored in double-digits for the third time this season.

• Edwards recorded 18 points, while Hammonds led the Bulldogs in scoring for the second-straight game — his third-consecutive game with 10 or more points — with 26. This exceeds his scoring performance from last year’s contest (11) against the Yellows Jackets by 15.

• Hammonds is the first player since 2017 to have consecutive 25-point games, with J.J. Frazier succeeded in the feat in 2017.

• Including tonight’s win, the Bulldogs are averaging 92 points in victories over their four opponents.

• The Bulldogs out-rebounded the Yellow Jackets, 43-37, a category in which Georgia has out-performed Georgia Tech in the teams’ last five contests. Out of those, Georgia is 5-0.

• Georgia out-shot Georgia Tech at the free throw line both halves. In the first half, the Bulldogs were 6-of-9 (67 percent) from the line, while the Yellow Jackets shot 3-for-10. Georgia finished the game 73 percent from the line to top Georgia Tech’s 52 percent finish.

• Despite trailing Georgia Tech in the first half by as many as eight, Georgia grabbed the lead near the end of the first period and held on to it for the remainder of the game.

On the game…
“We didn’t score for five minutes, but we never panicked. That’s important because sometimes, when you’re not scoring, you’re not as locked in, and you’re giving up baskets. We weren’t down very many [points]. I think what happens in these situations is we try to correct what we were doing wrong, especially defensively. The bottom line is we kept coming. We were turning it over some, but we weren’t trying to hit home runs, which is really important. When you’re trying to get back in it by hitting home runs [and] plays that aren’t there, you’ve got something to worry about. When you’re playing good, efficient offensive basketball, you know at some point it’s going to go for you, and that’s what happened.”

On Rayshaun Hammonds…
“Rayshaun has had a breakthrough. You never know when breakthroughs are going to come. You never know how the breakthroughs are going to come, and you can’t plan them. They have to be natural. He’s doing a good job. He’s letting things come to him. He’s playing with aggressiveness. He was getting down in the lane [and] all those types of things. He had a little bit of foul trouble, or who knows how many points he would have had tonight. He’s really working and improving. When he lets the game come to him, and when he’s on the attackand not trying to force it, you see a really good Rayshaun Hammonds.”

On his first big rivalry game…
“To be honest, I did not know it was a big rivalry game until the senior guard Tyree Crump came into the gym and was talking about how much he wanted to win this game and how many times they have beat Georgia Tech. I can’t be the freshman that comes in, and we lose. I just wanted to help my team. Rayshaun [Hammonds] did a great job by leading us. Everybody else just followed through.”

On Georgia Tech’s zone coverage…
“It was hard. I am pretty sure, when they watched film, they decided they wanted to press Tyree [Crump] and I hard. When we’d catch the ball, we couldn’t get our shots off. The main goal when we called a time out was to feed Rayshaun. If they were pressing on Tyree and I, we have the best forward in the country. He can eat, so we [fed the ball to Rayshaun].”

On how important it was to make a statement during this game…
“Before the game, Coach Crean said that we want to be ‘the Georgia team.’ We just wanted to come out that we are the team for Georgia.”

On what it means to be undefeated versus Georgia Tech…
“It’s a big win for us. As a team, I have never lost to them and don’t want to lose to them. That’s the main focus. We know it’s going to be a rivalry game, a hard fought game, but you have to have the mindset to be ready for battle with a great team.”

On whether he expected this type of start for himself after suffering a foot injury last season…
“The main focus was being in the gym 24/7. [I focused on] getting in shape and being a better player than I was last year. The freshmen help a lot and take a lot of stress off of me because they can play ball. When you have other players that can help you play, it makes the game way easier for you.”

On Michael Devoe’s 34-point performance…
“He’s a great player. He came out hot, and we tried to put different players on him. Once a player gets hot in college, it is kind of hard to stop him. We have to find ways to cool him down. He had a great game, and you can’t do anything about that. We got the win.”