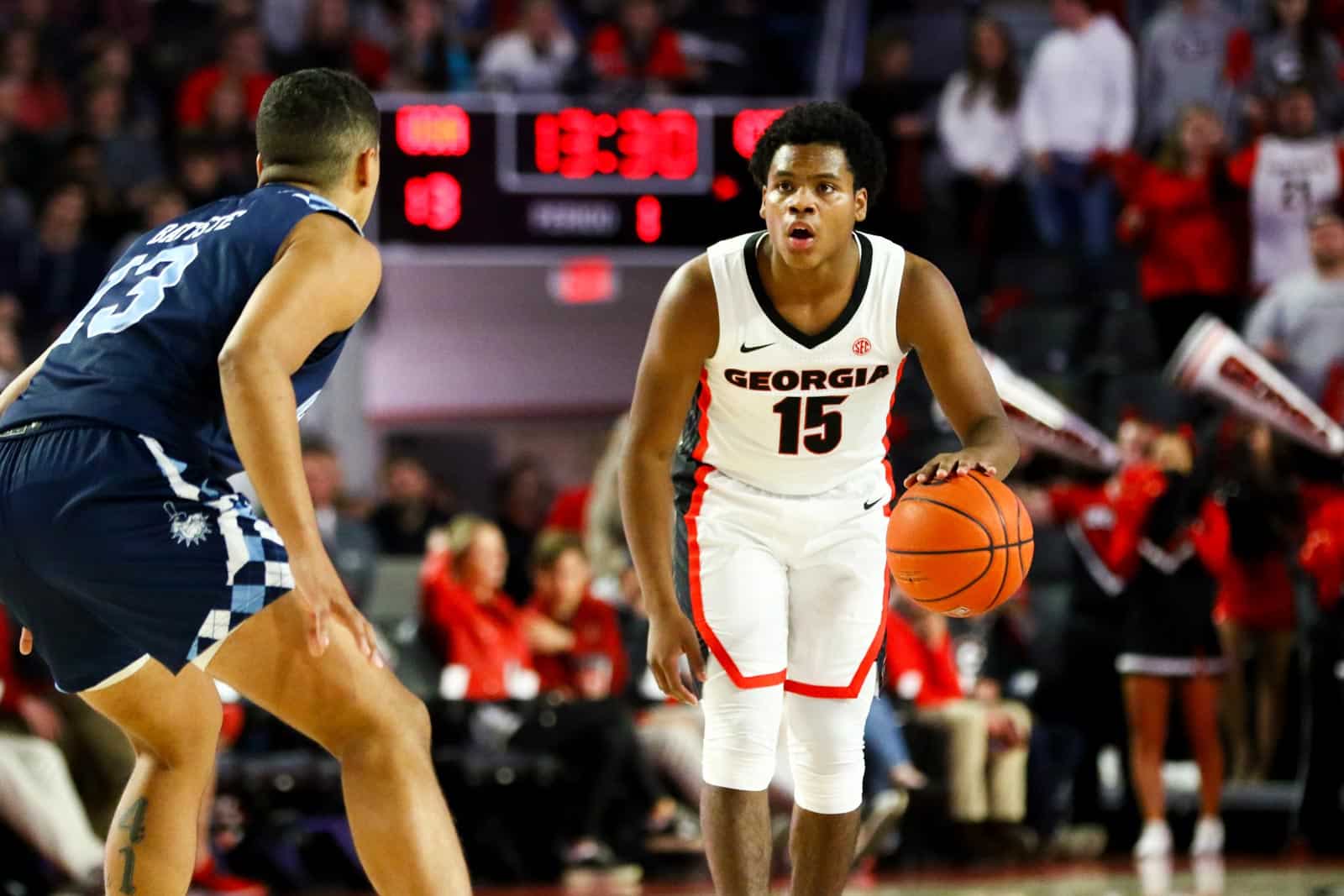 Georgia ended with single-digits in turnovers, committing only eight, a feat that only occurred once last season. Georgia’s defense caused The Citadel to turn the ball over 22 times, resulting in 28 points for Georgia. This bests Georgia’s 2018-19 season-high 24 points off turnovers.

“We found a way to get into the bonus early in both halves,” Head Coach Tom Crean said. “It was the 11-minute mark in the second half and 12:37 in the first half. The 10 extra free throw makes and the 13 extra free throw attempts were a huge part of the game. There was a lot of youth that came out tonight. We are working constantly to not over help on their dribble, and do a much better job of staying with our man. We have to become a more physical team and figure out ways to help us become that.”

Besides an early 2-2 tie, Georgia led for the entire game. All 11 Georgia players who saw the court put points on the board.

Georgia went on a 7-0 run over 52 seconds to take an eight-point lead with eight minutes to play. As a result of a two and half minute scoring drought for The Citadel, Georgia maintained a six-point advantage.

A nine-point lead was capped by Edwards on a fast-break dunk. Shortly following, back-to-back shots from behind the arc gave Georgia its first double-digit lead of the game, 45-35.

As time expired, Edwards notched another steal and sent Georgia into the half leading, 48-40.

Out of the locker room, Georgia jumped out to another double-digit lead. A four-point play from Gresham and a layup from Edwards boosted Georgia to its largest lead of the night, 12, with 15:32 remaining. Edwards scored seven points in 1:20 to maintain the double-digit lead, 67-57.

The Citadel went on a 8-0 run to cut Georgia’s lead to one, 74-73, with 9:40 to play. Georgia quickly responded, scoring on its next four possessions to regain an eight-point advantage.

While The Citadel creeped within two points with 2:39 remaining, baskets from Edwards and Hammonds extended Georgia’s lead yet again, 92-85. The Citadel would score only once more, as Georgia sealed the 95-86 victory.

Georgia returns to action on Friday, Nov. 15, at 7 p.m. against Delaware State in Stegeman Coliseum. The contest will be televised on SEC Network +.

• Georgia finished in single-digits for turnovers with eight, a feat which happened only once last season.

• Wheeler’s eight assists marks the most by an individual player since Turtle Jackson recorded eight in March 2018.

• All 11 Georgia players who saw playing time put points on the board.

• Georgia’s defense held Fletcher Abee, The Citadel’s leading scorer in the season-opener (17), to only eight points.

• Georgia saw the free throw line nearly twice as much as The Citadel, going to the line 31 times while only allowing The Citadel to reach it 18.

• The Bulldogs’ defense forced 22 turnovers by The Citadel, resulting in 28 points.

On the game…
“We found a way to get into the bonus early in both halves. It was the 11-minute mark in the second half and 12:37 in the first half. The 10 extra free throw makes and the 13 extra free throw attempts were a huge part of the game. There was a lot of youth that came out tonight. We are working constantly to not over help on their dribble, and do a much better job of staying with our man. We have to become a more physical team and figure out ways to help us become that.”

On the difference…
“I thought the lineup of Wheeler, Edwards, Brown, Gresham, and Crump was a huge component in this game. This isn’t a lineup that we play in practice much. We wanted to switch because they were putting a decision maker or a shooter in every time, and that’s just great offense.”

On the team…
“We have so much to learn and we have so many young guys. That urgency that we have to have on both ends, and we found it towards the end. We just have to become a more physical team. We have to have a more physical mindset and demeanor. I’m glad we have numerous guys and there’s going to be lots of ways to win this year, and fortunately we found a way to win this one.”

On the emphasis in practice of working on getting fast break bucket…
“[Getting the ball ahead] is a big emphasis for us in practice. We are a fast team and can play really fast. I don’t think we did that to the best of our ability tonight, but I think as we keep playing together, we can do a better job.”

On the ways Edwards can impact the game, aside from scoring…
“I think he impacts the game in a lot more ways than scoring, on defense especially. [He gets] deflections and steals. He does a great job rebounding and finds all of us open when passing and gets us open shots.”

On how he feels about the freshmen performing the way they are…
“It makes me very happy. The young guys are stepping up. They are young but all very good players. Anthony (Edwards), Sahvir (Wheeler), Toumani (Camara)– all the freshmen are really good and producing a lot for us.”

On having fewer fouls this game…
“I feel like we did a great job taking care of the ball. Sahvir came in, gave us a boost off the bench. Donnell Gresham and Rayshaun came in late in game and helped out. Everyone contributed to this win.”

On his excitement for a dunk…
“Some of it, cause I got my uncle right here (Donnell Gresham) keeping my team in the game. He gets real quiet and just to himself. Most of the excitement I feel is my passion for the game. I just love it. I love what I do. Love my teammates. I love to see everybody happy.”

On if he looks up his numbers…
“Like, they asked me in the locker room, why did I miss that last free throw? I told them all that matters is that we got the win. I don’t really care about having 29 or 28. I can get 30, numbers don’t really matter to me. I am going to miss free thows but that is on my end. I will make sure I get in the gym and work on my free throws for when it comes clutch time. It is okay with me as long as we got the win. That is all that matters. My team is happy so I am happy. We have a great coaching staff.”