No. 3 Georgia falls to South Carolina in double overtime, 20-17

No. 3 Georgia falls to South Carolina in double overtime, 20-17 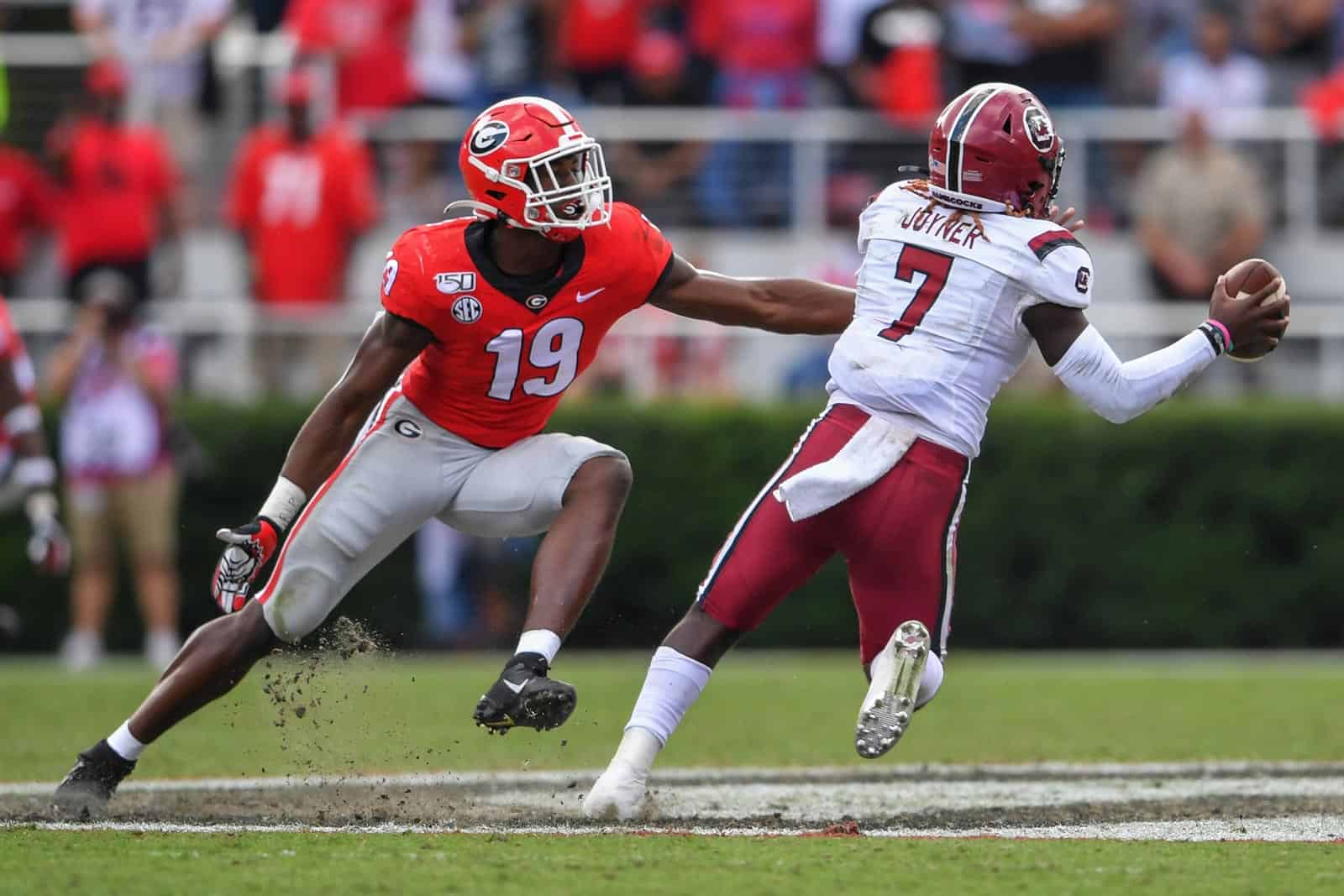 The loss marks Georgia’s first of the season and first home defeat since 2016. The Bulldogs are now 5-1 overall and 2-1 in the Southeastern Conference.

“Any time you get ready to play a football game, you have to set your jaw and go play physical,” head coach Kirby Smart said. “We didn’t do that. They played physical and attacked us. We’ve got to go out and help our players, and that starts with me.”

After trailing most of the game, Fromm directed a 13-play, 96 yard-yard drive that ended with a Demetris Robertson 6-yard TD reception in the back of the end zone to knot the score at 17-17 with 1:48 remaining.

The Gamecocks got the ball back with plenty of time to work with. Following a missed field goal, Georgia’s drive stalled on the ensuing possession, and the two teams went to overtime.

In the extra period, Fromm threw an interception on Georgia’s second play. South Carolina kicker Parker White then missed a 33-yard field goal on the Gamecocks’ next drive to send the game into a second overtime.

From there, the Gamecocks ran seven plays to set up a chip-shot for White. This time he knocked in from 24 yards to give his team a 20-17 lead. A 3-and-out on Georgia’s next possession set up Blankenship with his 42-yard attempt that went wide right and sealed the game for South Carolina.

The double-overtime thriller was set up by a back-and-forth regulation period.

After receiving the opening kickoff, the Bulldogs worked their way down field, but were stopped at the South Carolina 32-yard line. Blankenship came on to knock in a 50-yard field goal to put the Bulldogs ahead 3-0 in the first quarter.

Later in the opening frame, sophomore punter Jake Camarda recorded a career-long 66-yard punt to pin the Gamecocks at their own 7-yard line with just over three minutes left in the quarter.

Despite opening the drive deep in its own territory, South Carolina strung together a nine-play, 93-yard drive, highlighted by a 63-yard passing touchdown from Ryan Hilinski to Bryan Edwards to give the Gamecocks the 7-3 lead with 1:58 left in the first.

Georgia opened the second quarter by completing a nine-play, 75-yard drive capped by a one-yard rushing touchdown by junior D’Andre Swift to put the Bulldogs back in front, 10-7.  The Gamecocks evened the score with three minutes left in the half on a 49-yard field goal by White.

With a minute left in the half, South Carolina’s Israel Mukuamu intercepted a Fromm pass and returned it 53 yards to give the Gamecocks the 17-10 advantage. The interception was the first by the Georgia junior quarterback in 2019.

In the final seconds of the first half, South Carolina’s D.J. Wonnum blocked a 53-yard field goal attempt by Blankenship, ending the half with the Gamecocks ahead 17-10 and snapping Blankenship’s 12-for-12 streak to begin the season.

Both teams went scoreless for of most the second quarter until Robertson’s game-tying grab that helped send the game into overtime.

Next up, Georgia host Kentucky next Saturday, Oct. 19.

*Bulldogs Fall In Double Overtime: With today’s 20-17 loss in double overtime, Georgia is now 8-7 all-time in overtime including 1-2 in Athens. Today marked the first overtime game for the Bulldogs since the 2018 National Championship game in Atlanta vesus Alabama. Today, USC won the toss in overtime and chose defense. On Georgia’s second play, Israel Mukuamu notched his third interception of the game. USC then ran three plays and missed a 33-yard field goal wide right for the win. In the second OT, USC was forced to kick a 24-yard field goal and made it for a 20-17 lead. Then, Georgia missed a 42-yard field goal. The Gamecocks snapped Georgia’s 15-game winning streak against SEC Eastern Division foes dating back to 2016. Also, it ended Georgia’s four-game winning streak in the series that the Bulldogs lead 51-19-2.

*Second Half Defense: After the Gamecocks scored 17 points in the opening half, including a 53-yard interception return for a touchdown, Georgia held South Carolina scoreless in the second half until overtime as the Gamecocks had their backup quarterback (Dakeron Joyner) in to replace the injured Ryan Hillinski. Before overtime today, the Bulldogs had allowed just 17 points this season in the second half all season.

*Fromm’s Afternoon: Junior QB Jake Fromm (28-for-51, 295 yards 1 TD, 3 INTs) finished with career highs in attempts, completions and interceptions.  He had his first interception of the year since the 2019 Sugar Bowl, a stretch of 146 attempts. Today’s first INT went for a TD. It marked the Bulldogs’ first interception returned for a touchdown since Stetson Bennett threw one earlier this year versus Murray State.  Fromm was also sacked three times after only being sacked once in the first five games. Fromm directed a game-tying TD drive that was capped by a six-yard TD to Demetris Robertson with 1:48 left.  The drive covered 15 plays and 96 yards in 4:48. It was the longest drive by plays this season. Robertson had five catches for 51 yards and one TD.

*Blankenship’s Day: Graduate PK Rodrigo Blankenship connected on a 50-yard field goal, added two extra points and missed a 42-yard field goal in overtime that would’ve tied the game.  His field goal came on a four-play, 42-yard drive that took 4:45 to put Georgia up 3-0.  He has three 50 yarders this season (3-of-4 in 2019) and is 6-of-8 in his career from 50+.  He also had a 53 yarder blocked to end the first half, snapping a 12-for-12 start to the season.  This was his first blocked kick since the 2018 Missouri game.  He has connected on a school record 181 consecutive PATs and the Bulldogs are second nationally with a streak of 272 consecutive PATs dating back to 2014. Also of note on special teams, sophomore punter Jake Camarda drilled a career-long 66 yarder in the opening period that positioned the Gamecocks on their own 7-yard line.

*Switching Leads Today: Following four lead changes and a tie in the first half, Georgia went into the locker room trailing 17-10.  After Georgia struck first with a field goal, South Carolina scored the game’s first touchdown (a 46-yard scoring reception) in the first quarter on a nine-play, 93-yard drive that took just 3:59 to take a 7-3 lead.  Georgia bounced back with a 75-yard touchdown drive that finished at the beginning of the second quarter to put the Bulldogs up 10-7.  Junior TB D’Andre Swift finished the drive with a 1-yard scoring run.  He ended the game with a career-high 23 carries for 113 yards. It was his sixth career game of 100+yards.  After South Carolina tied it at 10-all on a 49-yard field goal, the Gamecocks had a 53-yard interception return for a touchdown to make the score 17-10 at the half.  After today, Georgia is now 6-7 when it is trailing at halftime under Kirby Smart.  Before today, the last time was when the Bulldogs were trailing 10-7 at halftime to #7 Notre Dame earlier this year and UGA won 23-17.

*For Starters: Junior Justin Shaffer started his second straight game at LG for Solomon Kindley.  Kindley did return to the lineup on the second series.  The Bulldogs actually started six linemen with sophomore Cade Mays lining up at a TE spot.  Graduate defensive tackle Michael Barnett started his first game of the season and second of his career.  Jake Fromm started his 34th straight to lead the offense while graduate S J.R. Reed now leads the defense with 35.

*Points Off Turnovers: The Bulldogs had four turnovers today and are even in turnover margin after giving up a 53-yard INT return for TD in the first half, a fumble in the third quarter and two INTs in the second half/overtime.  The Gamecocks failed to score on the fumble recovery and INTs.  Opponents have scored 21 points off eight miscues.

*Up Next: The Bulldogs (5-1, 2-1 SEC) play host to Kentucky next Saturday on Dooley Field in Sanford Stadium.  Game time and network has yet to be decided.

On today’s game …
“Any time you get ready to play a football game, you have to set your jaw and go play physical. We didn’t do that. They played physical and attacked us. We’ve got to go out and help our players, and that starts with me.”

On the turnovers …
“You can’t go 4-0. Four is astronomical. And when one goes for a touchdown, that’s a back breaker. You can’t turn the ball over in this league and win. It’s that simple.”

On execution …
“We didn’t execute real well. We didn’t play clean. We didn’t do a good job protecting the ball. If you turn the ball over, you will get your butt beat. … Every time we got something going and rolling, we stubbed our time in some area.”

On Rodrigo Blankenship …
“I hate that for him. He’s been so consistent and we’ve relied on him so many times. It’s tough, but you’re not going to make them all.”

On moving forward …
“This is when you find out about yourself. You look in the mirror and say, ‘What can I do better?’ As coaches and leaders of the team, we’ve got to do what helps our guys. … We’ll learn from it. If you let it linger, South Carolina beats you twice. Everything we want to achieve is still in front of us. We’ll work to get better. … It’s about getting better, and we’ve got to help get them get better. We’ve got to look at ourselves and what situations we need to be in to be successful.”

On the atmosphere at Sanford Stadium…
“I mean, Dawg Nation is amazing. They’ve been with us every step of the way. They’re so incredibly supportive of us, and they really came alive for us and helped us out there in crunch time there at the end.”

On what was going through his mind before the final kick…
“There wasn’t anything different going through my mind from when I’ve stepped onto the field before. I was just trying to go out, do my job and execute for the team.”

On the mood in the locker room…
“I mean, you know after a loss like this, it’s a struggle. We’re a team. We’ll come together and we’ll keep on chopping wood. We’ll keep on playing for the next game.”

On how you pick up a teammate after a loss…
“Man, Rodrigo [Blankenship] is an awesome kicker. To me, he’s the best kicker in the country. He makes field goal kicks all the time. We have to execute on offense and make soe plays to take pressure off Rodrigo and the things that he does for our team as well.”