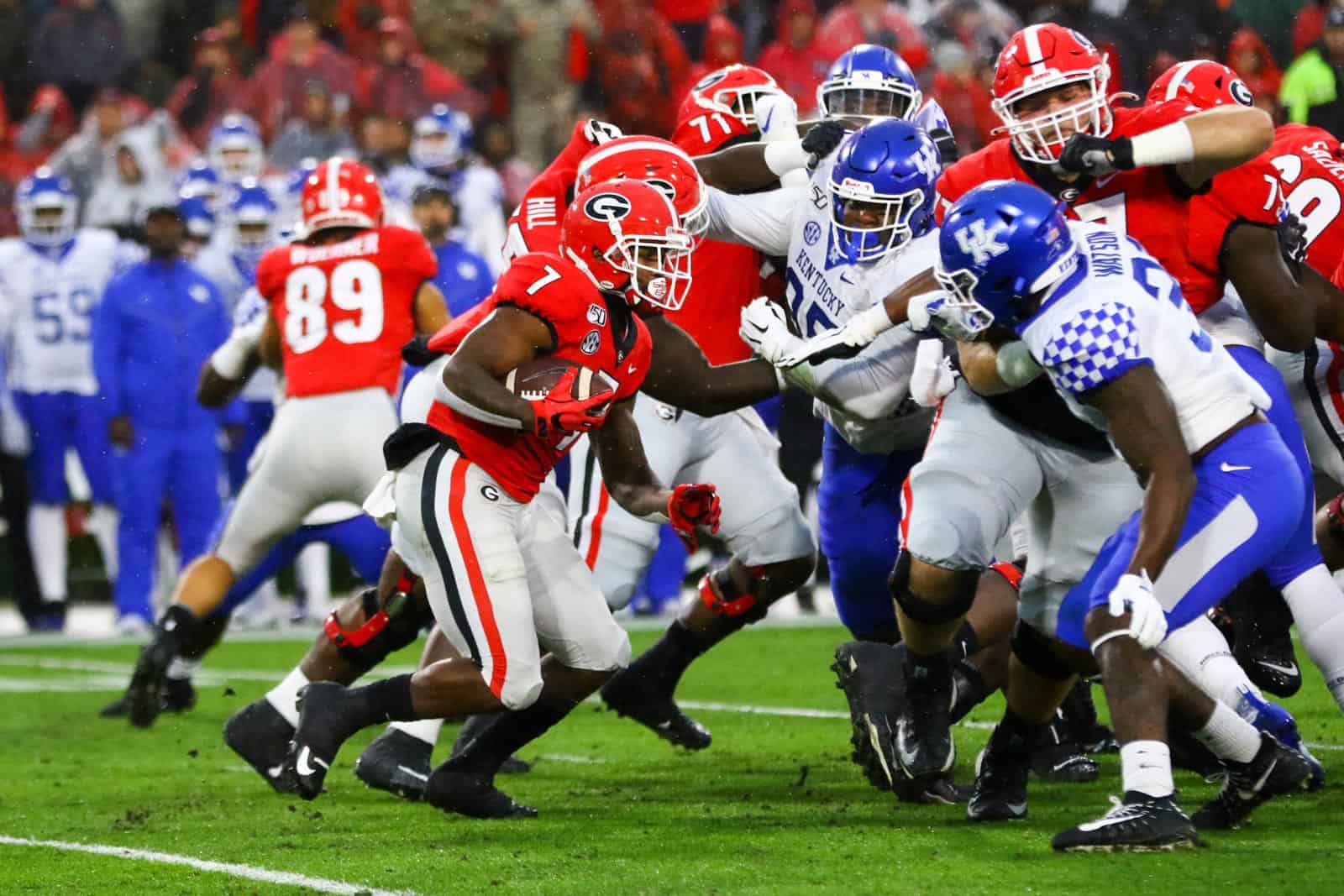 A pair of touchdowns from junior tailback D’Andre Swift and a third-quarter touchdown scamper from senior tailback Brian Herrien proved to be the difference for the Bulldogs. Swift finished the day with 179 total yards.

Georgia improves to 6-1 overall and 3-1 in the SEC ahead of its matchup against Florida on Nov. 2 in Jacksonville, Fla.

“You have to be patient with those type of elements,” head coach Kirby Smart said. “You’re not just going to run the ball down their throats or throw it 30-40 times in those conditions. It was a field position game, and we needed to win field position. In the second half, we did that, along with running the ball.”

The elements immediately impacted the opening quarter as both teams struggled to find momentum on offense. After each squad punted on their opening possessions, Kentucky entered Georgia territory with a 19-yard punt return, but their conversion attempt on 4th-and-2 was undone by a false start penalty and led to a punt.

The Bulldogs appeared to have finally broken into Wildcat territory midway through the second half as Fromm scrambled to the Kentucky 49-yard line, but the spot was changed following a review. On the ensuing 4th-and-1 at midfield, Fromm’s sneak was stopped at the line and Kentucky took over on downs. On their following possession, the Bulldogs again neared midfield with a pair of long runs, but a stalled offense led to a punt. For Georgia, it was the first scoreless half since a 10-0 loss at Alabama in 1991.

Kentucky opened the second half with the ball and proceeded to drive into Georgia’s side of the field, reaching the 27-yard line before a holding penalty coerced another punt. After a poor Wildcat punt set up the Bulldogs in Kentucky territory, Swift immediately scored with a 39-yard touchdown run, putting Georgia ahead 7-0 at the 6:20 mark of the third quarter.

On the ensuing Wildcat possession, the Bulldogs’ defense announced its arrival as senior safety J.R. Reed forced a fumble by Kentucky quarterback Lynn Bowden, Jr. that was recovered by junior safety Richard LeCounte at the Kentucky 31-yard line, the third recovery of his career. With an opportunity to assume control of the contest,Herrien scampered for an 8-yard touchdown run that capped off a 5-play, 31-yard drive and extended the lead to 14-0 with 1:54 to play in the third.

Needing a response, Kentucky got off to a strong start when senior kick returner Zach Johnson brought the kickoff back to the Georgia 40-yard line. A 21-yard Bowden rush placed the Wildcats in the red zone for the first time, but freshman running back Chris Rodriguez was unable to haul in a wide-open touchdown catch. After an incompletion, the Georgia front forced Bowden out of the pocket on fourth down and held the Wildcats out of the end zone.

Georgia opened the following drive deep in their own end, but a heavy emphasis on the run game brought the Bulldogs back into the Wildcat red zone. Swift’s 3-yard touchdown run with just over six minutes to go put the final touches on Georgia’s 21-0 win.

*Bulldogs Blank Kentucky In Wet Battle On Homecoming: With a steady rain falling and temperatures in the low 50s all night, Georgia was able to score 21 points following a scoreless half and registered a shutout. It was the second shutout of the year (Arkansas State 55-0 on Sept. 14) and fourth in the Kirby Smart era. Before tonight, the last one in an SEC contest came in 2017, 44-0 over Tennessee in Knoxville. With tonight’s win, Georgia leads the UK series 59-12-2 including 10 straight over the Wildcats. Also, Georgia is 78-18-2 on Homecoming including 15-2-1 against the Wildcats. This was the first shutout of Kentucky since a 1981 Homecoming win (21-0).

Junior D’Andre Swift (21-for-179 yards, 2 TDs) finally ignited the crowd with a 39-yard touchdown run in the third quarter to give the Bulldogs a 7-0 lead.  That was the only play of the drive, and it was the fastest drive of the season at 11 seconds.  Georgia forced and recovered a fumble on the next series and then scored its second touchdown of the quarter at the 1:54 mark.  Senior TB Brian Herrien ran this one in from 8 yards out.  Swift added a second score on a 3-yard dive in the fourth quarter. Georgia and Kentucky combined for 178 yards, including 123 from the Bulldogs, in the first half and finished the first two quarters at 0-0.  This marks the first scoreless half in a Georgia game since 1991 when the Bulldogs played at Alabama.  The Bulldogs went on to lose that contest 10-0.

*Defense Continues To Shine: Georgia came into the game leading the SEC and sitting sixth nationally in Scoring Defense at 12.3 points/game. Tonight marked the Bulldogs’ second shutout of the year after topping Arkansas State 55-0. The Bulldog defense held Kentucky to 177 yards of total offense (160-rushing, 17-passing). The Wildcats had just two first downs on 21 plays in the first two quarters. Senior Tae Crowder, junior Richard LeCounte, sophomore Quay Walker and freshman Nakobe Dean tied for the team lead with six tackles apiece. Sophomore Jake Camarda punted the ball six times for an average of 52.8, including a long of 64.

*Offense: The Bulldogs concentrated in the running game with the wet conditions and finished with 235 yards on the ground in 43 carries (5.5 avg.).  D’Andre Swift had 21 carries for 179 yards (8.5 avg.) and two touchdowns (seven on the year) to lead the Bulldogs.  He now has seven games with at least 100 yards rushing, including three 100-yard performances this year.  This is the most rushing yards for the Bulldogs since Swift went for 186 on 17 carries in the 2018 victory versus No. 24 Auburn.  Junior QB Jake Fromm was limited to just 35 passing yards, going 9-of-12. He is now 29-6 as a starting quarterback.

*Blankenship Boots It: Graduate PK Rodrigo Blankenship kicked three extra points.  He has connected on a school record 184 consecutive PATs.  The Bulldogs lead the nation with a streak of 275 consecutive PATs dating back to 2014. Blankenship is now tied with Blair Walsh (2008-11) for second place in all-time career PATs made by a Bulldog.

*Points Off Turnovers: Georgia is +1 in turnover ratio this year.  Graduate S J.R. Reed drilled Kentucky QB Lynn Bowden to force a fumble at the 4:30 mark on the UK 31 yard line in the third quarter and junior DB Richard LeCounte collected the loose ball.  Brian Herrien scored on an 8-yard scamper on the next drive.  The Bulldogs have scored 30 points off nine turnovers while opponents have scored 21 points off eight Georgia miscues.

*For Starters: Freshman WR George Pickens started his first game. Brian Herrien returned to action after missing last week with a back strain.  Jake Fromm started his 35th straight to lead the offense while J.R. Reed now leads the defense with 36 in a row.  Also of note, redshirt freshman DB Divaad Wilson made his second start of the year.

On today’s game …
“You have to be patient with those type of elements. You’re not just going to run the ball down their throats or throw it 30-40 times in those conditions. It was a field position game, and we needed to win field position. In the second half, we did that, along with running the ball.”

On catching passes in a driving rain …
“Ask people who’ve done it. If you’ve done it, you know how tough it is. If you haven’t done it, you probably shouldn’t judge.”

On punter Jake Camarda …
“He boomed some in tough conditions. The first thing was fielding the snap. He’s a tremendous athlete with good hand-eye. He caught it and he hit some big punts. That was a big difference in the field position battle.”

On Georgia’s offense …
“Congrats to our offense on not turning the ball over. That was huge. Ball security has been great for our offense.”

On Kentucky’s quarterback …
“(Lynn) Bowden is an extremely good athlete. He can run around and create and he gives teams fits.”

On bouncing back from a loss …
“Our guys worked their tails off and were in great spirits. I thought D’Andre Swift talking to the team was great. Outside noise, whether it’s positive or negative, does not affect them. They are grinding and preparing. Our best football is ahead.”

On the open date …
“We’ve got a tough lineup coming up the next few games. We’ll use the open date to continue to get better. We’ll work on fundamentals, blocking and tackling, and get the ball to the playmakers. I’m excited about our guys getting to work this week.”

On running the ball and wearing down on Kentucky’s defense …
“It felt pretty good. We knew it was going to be a hard game to throw the ball because of the conditions. We have a period in practice called team run where the defense knows we’re running the ball. That’s what it was and I think we played pretty well.”

On the running performance and D’Andre Swift…
“We just kept chopping. In the first half, we didn’t run it as well as we might have. We might have bobbled a snap or had a penalty, but we kept chopping and we came out and ran the ball pretty well. D’Andre ran pretty well today.”

On the team’s confidence level…
“We definitely feel like we’re on track. Everything that we want is still in front of us. When we come out there, if we’re playing ball as we should, I think it will go great.”