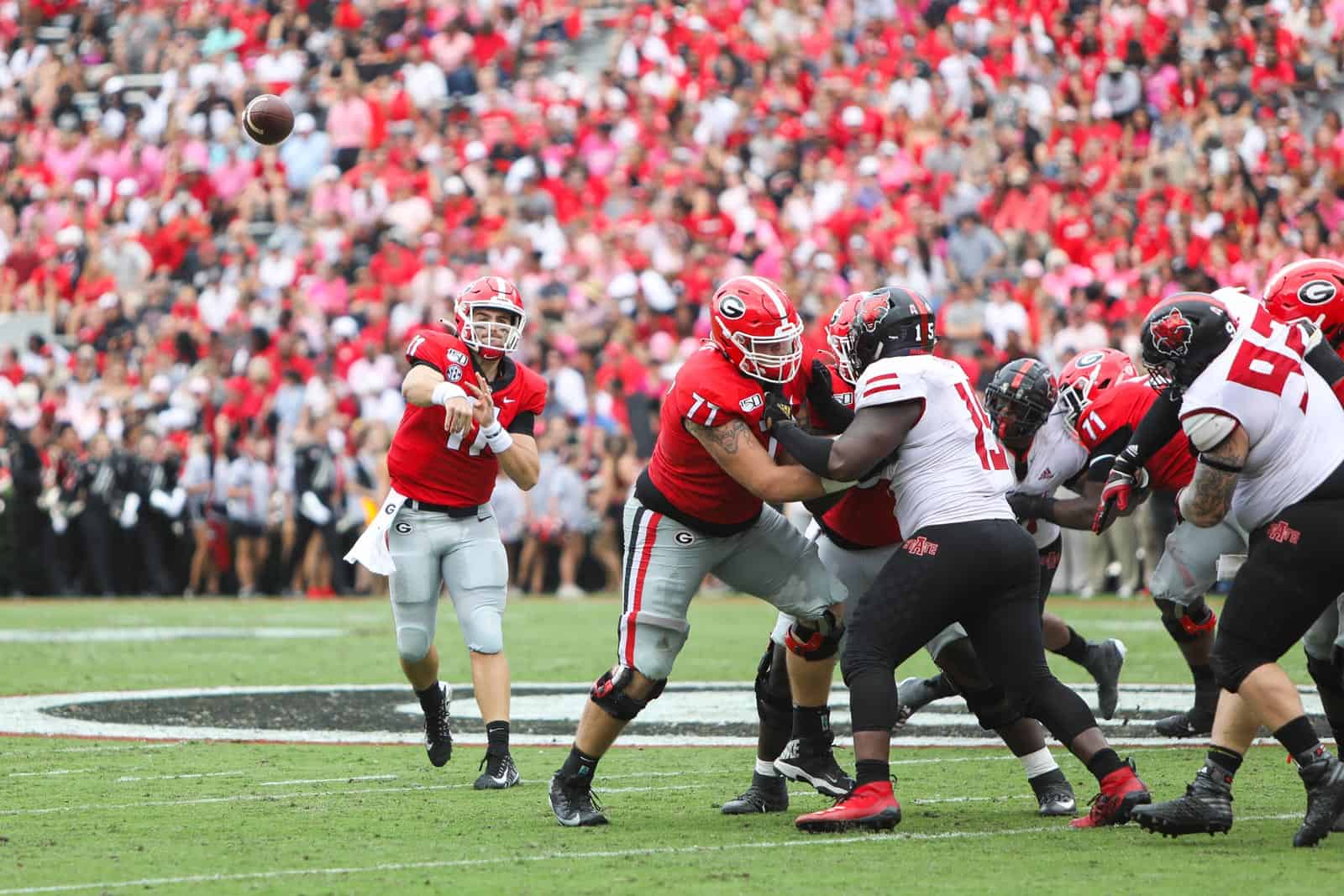 ATHENS, Ga. – The No. 3-ranked Georgia Bulldogs totaled nearly 700 yards of offense and held Arkansas State scoreless in a 55-0 win Saturday at a sold-out Dooley Field at Sanford Stadium.

Georgia (3-0, 1-0 SEC) finished with 656 total yards, while the Bulldogs’ defense helped the team record its largest margin of victory under head coach Kirby Smart. Arkansas State finished with 220 total yards, including just 43 on the ground.

Junior quarterback Jake Fromm completed 17-of-22 passes for 279 yards and three touchdowns, while junior tailback D’Andre Swift led all rushers with 76 yards on the ground.

“We played really hard and we were focused,” Smart said. “Our Saturday scrimmages leading up the season helped us toward that. We started fast and really played hard. … We did some good things. At the end of the day, it’s all about execution. You can’t have a lack of focus or discipline, and our kids did that.”

Swift did most of the heavy lifting on Georgia’s first offensive possession with two rushes for 17 yards. Brian Herrien capped off the six-play, 60-yard drive with a three-yard touchdown to put the Bulldogs up 7-0.

Following an Arkansas State three-and-out, Georgia’s drive stalled at the Red Wolves’ 12-yard line. Senior kicker Rodrigo Blankenship knocked in a field goal from 29 yards and followed with a 41-yarder to send the Bulldogs to the second quarter with a 13-0 advantage.

Georgia scored quick with 60-yard TD strike from Fromm to freshman Dominick Blaylock on the first play of the second quarter. Swift added a 48-yard TD dash and Lawrence Cager caught a five-yard TD score to give the Bulldogs a 34-0 halftime advantage.

Georgia’s defense held the Red Wolves to just 81 yards in the first half, including 11 total yards in the opening quarter.

It was much of the same in the final 30 minutes. The Bulldogs added a 37-yard touchdown from James Cook, a one-yard score from Zamir White and a 62-yard scamper from Kenny McIntosh to put the final score at 55-0.

The Bulldogs return home next Saturday, Sept. 21 to take on Notre Dame at 8 p.m. ET.

*Defense Setting The Tone: The Bulldogs (3-0) posted their first shutout of the year, registering a 55-0 victory over Arkansas State. It was the first shutout since the 2018 season opener here (45-0 over Austin Peay). The 55-point margin of victory was the largest under Kirby Smart, and the biggest by the Bulldogs since 2014 when it blanked Troy here 66-0. The Bulldogs have allowed only 23 points in three games.

For the third straight game, Georgia’s opponent was held under 300 yards of total offense. ASU finished with 220 on 68 plays. The leading tacklers were Robert Beal, Jr., and Tyler Clark with five apiece. Clark registered his first sack of 2019 and the fifth of his career.  Sophomore OLB Quay Walker also had his first career sack as the Bulldogs had four.

*Pouring On The Points Quickly: The Bulldogs scored 21 points at Vanderbilt in the first half and then 42 in the first two quarters against Murray State before piling up 34 points against Arkansas State to start Saturday’s game.  Georgia scored a touchdown on its opening drive for the third straight game following a six-play, 60-yard drive at the 9:02 mark in the first quarter.  As he has the first two games, senior TB Brian Herrien scored with a 3-yard run to put the Bulldogs up 7-0.

The Bulldogs finished today with 656 yards of total offense (5th best in school history) on 66 plays Junior QB Jake Fromm completed the game 17-for-22 for 279 yards and three touchdowns while junior D’Andre Swift led the ground attack with 76 yards on nine carries, including a 39-yard scamper in the second quarter that set up UGA’s third touchdown.  Swift reached the end zone on that drive with a career-long 48-yard catch, which was the fifth receiving touchdown of his career.  He had two catches for 64 yards.  Also on the ground, sophomore TB James Cook had a career-long 37-yard touchdown run and finished with 51 yards on three carries.

*A 98-Yard TD Drive: The Bulldogs upped their lead to 55-0 at the 9:07 mark in the fourth quarter on a six-play, 98-yard drive.  This was the longest TD-drive since going 98 yards in 11 plays against Auburn in 2014 that made it 34-7 Bulldogs.  Freshman TB Kenny McIntosh went 62 yards for a touchdown on the drive, marking the first score of his career.

*Aerial Attack: Fromm connected with freshman WR Dominick Blaylock for a 60-yard touchdown at the beginning of the second period.  Blaylock finished with four receptions for 112 yards, which is the first 100-yard game for a Bulldog since Mecole Hardman (6 rec., 103 yards) versus South Carolina last year.  Blaylock’s 60-yarder was a career long reception and the longest for the Bulldogs this year.  Blaylock has now scored for the second game in a row.  Graduate WR Lawrence Cager had his first career touchdown catch at UGA on a 5-yard strike from Fromm.  He had 10 touchdown catches at Miami (2015, 2017-18).  Georgia’s leading receiver was freshman WR George Pickens, who snagged five for 84 yards

*Blankenship Boots It Through: Graduate PK Rodrigo Blankenship collected 13 points, drilling field goals of 29 yards and 41 yards (season long) plus had seven PATs.  Blankenship is now 5-for-5 on the year in FGs.  He is second in SEC history for Career Consecutive PATs made with 173. The SEC record is 198 held by Daniel Carlson (Auburn). Blankenship already owns the Bulldog record.

*For Starters: Junior Malik Herring (DL) started his first game of the year and the second of his career. Lawrence Cager got the start for the first time in his Bulldog career after starting a total of 18 games at Miami. While sophomore Cade Mays moved from RG to RT, junior Ben Cleveland started at RG, marking his first start of 2019 and 10th of his career.  Jake Fromm started his 31st straight to lead the offense while graduate J.R. Reed (S) now leads the defense with 32 in a row.

*Injury Report: Senior WR Tyler Simmons had two catches for 21 yards and a punt return for 17 yards but had to leave the game at the end of the first quarter with a right shoulder injury.  Sophomore DB Tyson Campbell did not return after halftime with a right foot injury

*Up Next: The Bulldogs (3-0) play host to Notre Dame on Dooley Field in Sanford Stadium on Saturday, Sept. 21 at 8 p.m.  CBS will televise the top-10 matchup. The Fighting Irish (1-0) face New Mexico at home today.

On the win …
“We played really hard and we were focused. Our Saturday scrimmages leading up the season helped us toward that. We started fast and really played hard. … We did some good things. At the end of the day, it’s all about execution. You can’t have a lack of focus or discipline, and our kids did that.”

On the defense …
“I was happy with the way the defense played. We had good matchups outside and we challenged our guys to get their hands on them. They made some plays. … With our bigger people up front, they struggled to move us (in the running game). They could not get us out of there. We controlled the line of scrimmage.”

On coaching up the reserves …
“We are coaching the moment. To us, that kid’s opportunity is as big as the kid’s who starts. We want to apply pressure and make sure they understand it because you never know when your jersey is going to be called.”

On playing so many players …
“It’s a good thing, but it’s a little concerning that we have not played a four-quarter game yet. We’re about to go down that road. Will we play the same in the fourth as we do in the first? We have physical, tough practices as if we’re in the fourth quarter. Most of our kids will tell you our practices are tougher than the games.”

On the fans honoring Arkansas State …
“(Blake Anderson) is a great person and I have a lot of respect for him. He’s such a wonderful person. I can’t imagine what he’s been through. Our fans showed up and showed out. It was a great turnout, and I’m so proud that they embraced a program that has been through some tough times.”

On the offensive line play…
“The guys are doing a great job up front, doing a great job of communicating. Hopefully they can keep it up and keep it going. It wasn’t very hot out there today, so they didn’t have to worry about that. But let’s keep challenging them and keep making those guys better.

On the chemistry with Lawrence Cager and his receivers…
“He’s doing a great job. Cager, he’s an older guy. He’s a guy who’s stepped up and really filled a role for us. He did a great job transitioning to block off routes and we made some extremely explosive plays today, so we’ve got to commend him for that. He did a great job of coming back to the ball [on their touchdown connection]. He’s an older guy, takes his job very seriously and makes great plays.”

On whether there was any increased blitzing against Arkansas State…
“It was just something we wanted to focus in on during the week in practice. We just wanted to go ahead and show some of our defensive value.”

On what James Cook said to him after his block keyed Cook’s 37-yard touchdown run…
“It was just a thank you. I told him, ‘I’ve got your back.’ No matter what. Whatever they need, I’m here for.”

On freshmen George Pickens and Dominick Blaylock making plays…
“We treat every game like we’re playing in an SEC Championship or a National Championship, no matter who the opponent is. For them [Pickens and Blaylock] to come out and play the way they did with consistency, it’s exciting to see for Georgia for many years to come.”