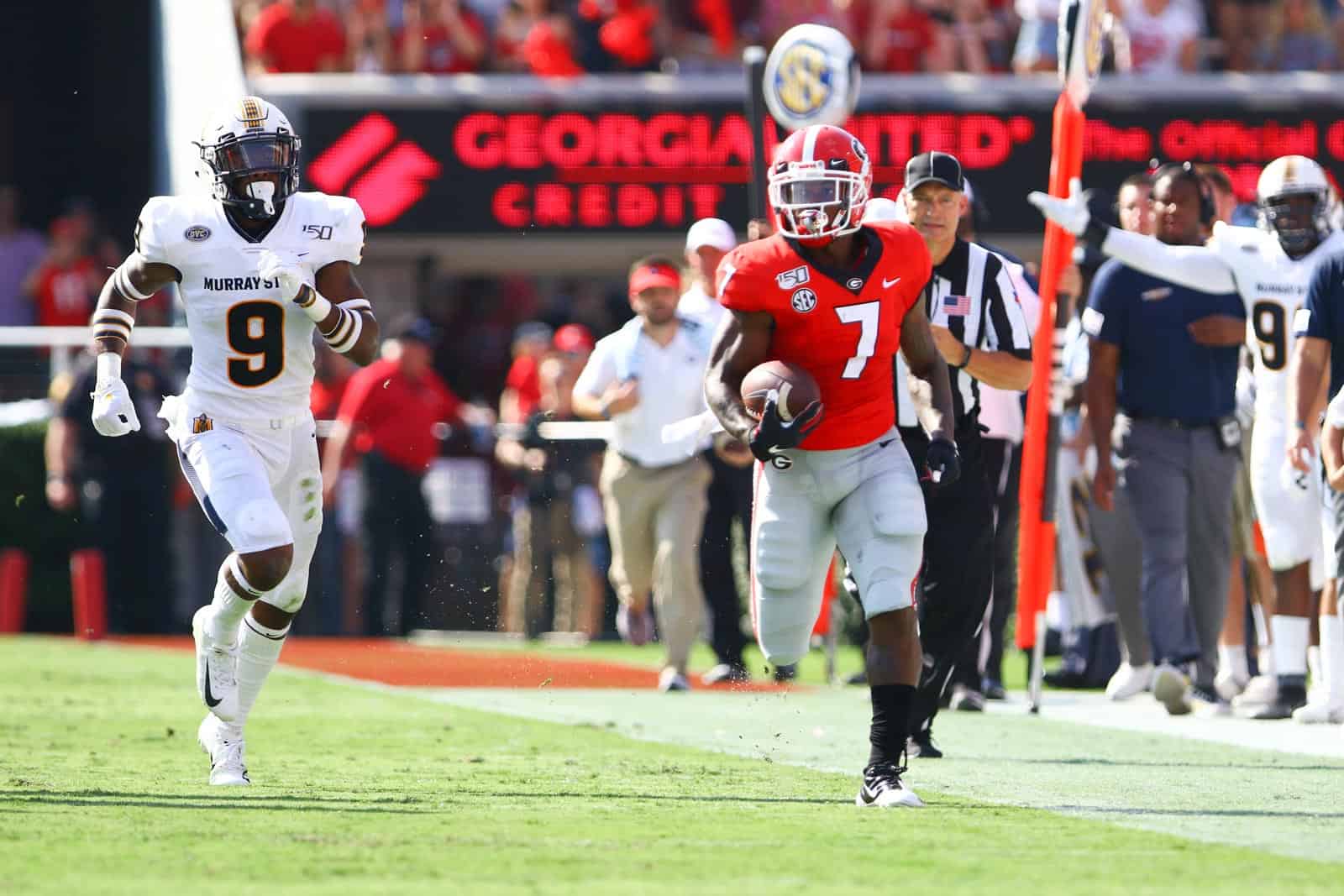 Before kickoff, former head coach and athletic director Vince Dooley was joined by his family and captains from each of his 25 Georgia teams for the unveiling of Dooley Field.

The 2019 Bulldogs (2-0, 1-0 SEC) then used an efficient 10-of-11 passing effort from junior quarterback Jake Fromm, as well as 269 rushing yards from seven different running backs to run past the Racers.

Redshirt-freshman tailback Zamir White led all rushers with 72 total yards and scored the first touchdown of his career off a six-yard scamper in the second quarter.

“We’re always proud to get a win,” head coach Kirby Smart said. “At the end of the day, a lot of work goes into a game, and I want the kids to be able to celebrate that. We just need to fix a few things. … We’ll work this week, like we always do, on fundamentals. We’ve got to tackle better. We had sloppy, sloppy tackling. Against good people, that will come back to haunt you. We’ll work on that.”

Fromm directed a four-play, 56-yard drive, capped off by D’Andre Swift’s first touchdown of the season to open the game.

Murray State quickly answered as quarterback Preston Rice connected with wide receiver DaQuon Green for a 60-yard score to knot the game at 7-7 with 6:36 remaining in the first quarter.

The opening frame ended with Georgia driving at the Murray State 15-yard line. The Bulldogs scored back-to-back touchdowns early in the second, thanks to a Brian Herrien two-yard rush and a J.R. Reed fumble recovery that he took back for a 14-yard score.

On the Bulldogs’ first offensive possession of the second half, Racer defensive back Nigel Watson intercepted a Stetson Bennett pass and ran it back 35 yards to cut into Georgia’s lead.

The Bulldogs led 49-17 at the end of three quarters, and maintained their lead the rest of the game.

*Bulldogs Win 63‐17: The Bulldogs exploded for 35 points against Murray State in the second quarter after finishing the first quarter tied 7‐all. Georgia went on to post a 63‐17 victory at Dooley Field at Sanford Stadium, marking the most points scored since the Bulldogs topped Massachusetts 66‐27 last year. The 42 first half points was the most points since UGA scored 42 points against New Mexico State in 2011. Georgia won that day 63‐16. The Bulldogs also scored 42 points in the first half versus Middle Tennessee and UMass last year. Today, Georgia collected 561 yards of total offense on 65 plays. The Bulldogs have won eight consecutive home openers including 4‐0 under Kirby Smart.

Junior QB Jake Fromm saw action only in the first half, going 10‐for‐11 for 166 yards and a TD. Graduate TE
Eli Wolf finished with a career‐high four catches for 73 yards, including a season‐long 24‐yarder. Freshman George
Pickens recorded his first catches of the year, finishing with four receptions for 78 yards and a touchdown. Redshirt sophomore QB Stetson Bennett (9‐for‐13, 124 yards, 2 TDs, 1 INT) handled the duties at the end of the first half and most of the second half in his first action. Bennett connected for his first career touchdown on a 15‐yarder to junior WR Demetris Robinson and had a 1‐yard rushing touchdown. Robinson now has scoring catches in his first two games this season. He finished with three catches for 21 yards.

*Swift Rushing Attack: Junior TB D’Andre Swift capped a four‐play, 56‐yard opening scoring drive with a three‐yard touchdown run in the first quarter. Swift ran it in from 10 yards in the second quarter, giving him his third game of two rushing touchdowns in his career. These were his first touchdowns of the year and 14th and 15th of his career.
With a season‐long 40‐yard rush at the end of the first quarter, Swift finished with 67 yards on six carries (11.2 avg).
Senior Brian Herrien scored his second touchdown in as many games to put the Bulldogs up 14‐7. He finished with
five carries for 31 yards and tallied the ninth score of his career.

*Defense: The Bulldog defense held the Racers to just seven points and 143 total yards in the first half, and MSU
finished the day with 17 total points and 284 yards in 60 plays. The Racers had a three‐play, 72‐yard scoring drive in
the opening quarter, highlighted by a 60‐yard scoring strike from Preston Rice to DaQuon Green. Junior DB Mark
Webb led UGA with six tackles today. Freshman OLB Nolan Smith had 1.5 sacks while junior OLB Walter Grant added another sack as the Bulldogs finished with six sacks on the day.

*Blankenship Moves Up: With his nine extra points (tied career high), graduate Rodrigo Blankenship is second in SEC history for Career Consecutive PATs made with 166 and tied his career. The SEC record is 198 held by Daniel Carlson (Auburn) with 198. Blankenship already owns the Bulldog record.

*Points Off Turnovers: The Bulldogs gave up a fumble and an interception and Murray State turned the pick into a touchdown. Georgia recovered a fumble and turned it into a touchdown. Eli Wolf caught his second pass in a row
late in the first quarter and then fumbled on the Murray State 32 yard line. The Racers recovered the ball and
returned it to the 40. MSU punted on its next possession. The Racers’ Nigel Walton snagged an interception in the
third quarter and returned it 35 yards for a score. Mark Webb drilled a Racer receiver at the beginning of the second
quarter deep in MSU territory and J.R. Reed collected the loose ball and returned it 14 yards for a touchdown. Sophomore Latavious Brini notched his first career interception with 35 seconds left as Georgia ran out the clock.

On the win…
“We’re always proud to get a win. At the end of the day, a lot of work goes into a game, and I want the kids to be able to celebrate that. We just Need to fix a few things. … We’ll work this week, like we always do, on fundamentals. We’ve got to tackle better. We had sloppy, sloppy tackling. Against good people, that will come back to haunt you. We’ll work on that.”

On the heat…
“We’re used to the heat. We’ve had 24-25 outdoor practices in that kind of heat, so we’re used to it. I thought they did a good job of pushing through it. We were sloppy at times and we played well at times. We’ve got things to correct. But playing a game, that’s how you get better. It’s not always perfect, but if you keep chopping wood, good things happen. We got some momentum there in the second quarter.”

On playing so many people…
“It helps tremendously to go out and play. Players think they’re ready, then their moment comes, and they’ve got nerves. The next time, they get better. Then better. Then better. A lot of guys got to grow up today. It’s a maturity process as we build toward the future.”

On receiver George Pickens…
“Pickens did some good things. He’s talented. He just needs to control his emotions. I love the kid and he plays with energy, but he needs to play within the realm of the discipline of our program. He’s got a lot of talent. I’m excited for his future.”

On Arkansas State…
“They have a good program. They’ve upset a lot of teams through the years, some in our conference. And it’s been a cradle for good coaches. They do a good job in these types of games.”

On the naming of Dooley Field at Sanford Stadium…
“Congratulations to Coach Dooley. What a great person, what a great man. He has touched so many lives, so many generations. I was proud that our fans braved the 100-degree heat to be in the stadium to honor him.”

On the freshman running backs catching the ball…
“Most definitely, we’ve got a lot of young guys that can play. It felt good today to see them go out there and do that.”

On what he takes away from this game…
“Just seeing how the young guys did. We’ve got to get better and we’ve got to start better. Defense played well for the most part, and just a lot of young guys did some great things today.”

On whether ‘havoc’ led to overplaying on defense…
“We just had a couple mistakes. I think it’s just on our part. That’s something we can fix next week, though. I think we can fix it.”

On scheming for Murray State’s offense…
“We just do it week-by-week and focus on whoever’s in front of us. First, we get that done and then we worry about the next one. We just came in and focused on Murray State, just stopping them and continuing on this season.”

On his fumble and recovering from that play…
“The fumble, I expect more out of myself. I got stood up and there’s no excuse for that. For the coordinator, Coach [James] Coley, to come back to me and have trust in me, it meant a lot. It helped me get over it a little bit and move on. That’s what you’ve got to do with those kind of plays.”