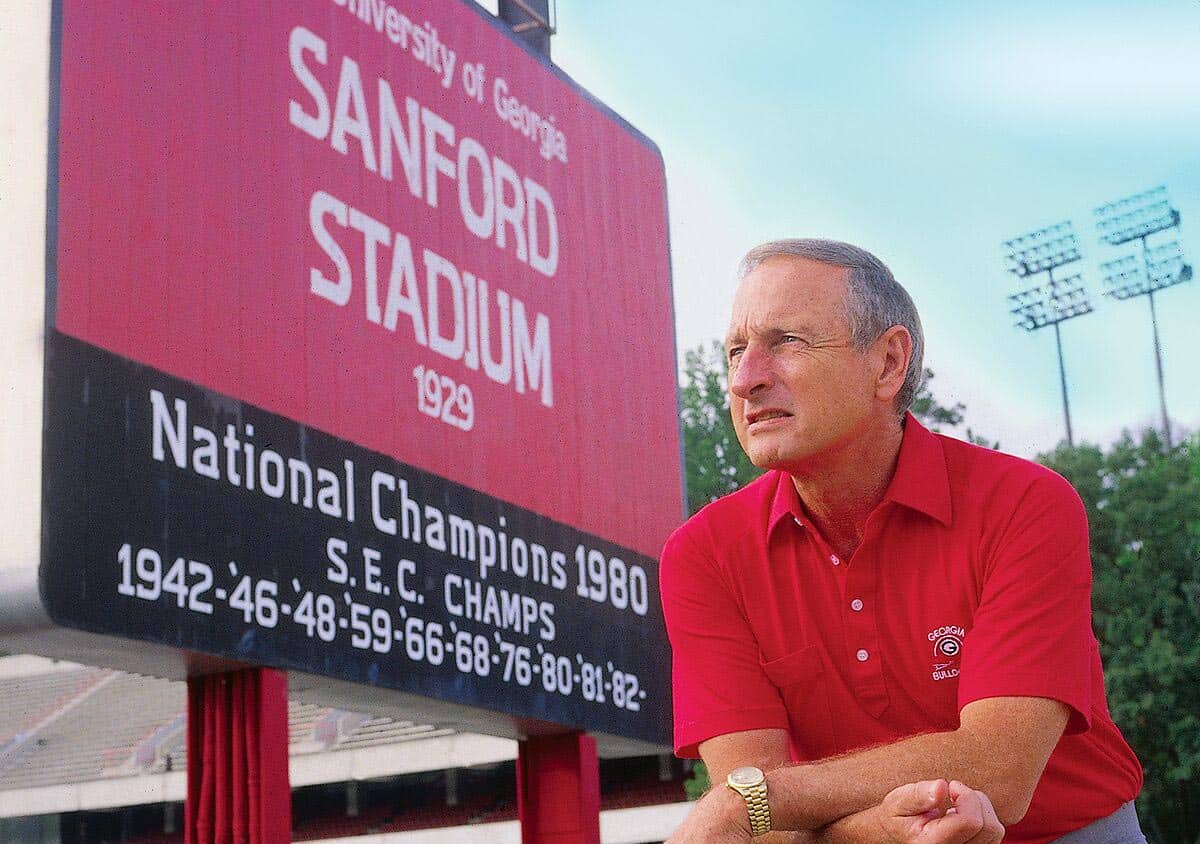 On Saturday, Sept. 7, during pre-game ceremonies prior to the Georgia-Murray State game, the field at Sanford Stadium will be dedicated in the name of Vincent J. Dooley, who enjoyed a more than 40-year association with the university as head football coach and director of athletics.

The dedication follows a May 2 proposal made by the University of Georgia to the University System Board of Regents to create Dooley Field at Sanford Stadium in honor of Dooley. The Regents approved the proposal on May 14.

President Jere W. Morehead, J. Reid Parker Director of Athletics Greg McGarity, University System Board of Regents Chairman Don Waters, and team captains from Dooley’s 25 years as head coach will join Dooley and his family for the pre-game ceremonies Saturday between the hedges.

For over 50 years now, Dooley has had an enduring impact on the University of Georgia, the Southeastern Conference, and college athletics across the country. Serving as head football coach at UGA from 1963 to 1989 and as director of athletics from 1979 to 2004, he has been a man of great foresight in times of charting the future, a man of stability in times of change, and a man of vision in critical times that have shaped the path of college athletics.

Dooley is the only person ever to hold the presidency of both the American Football Coaches Association and the National Association of Collegiate Directors of Athletics—a testament to his contributions to coaching and athletics administration.

He has received numerous national honors, including the John Wooden Citizen Cup Award for his positive influence on the lives of others, the Bear Bryant Lifetime Achievement Award for excellence in coaching both on and off the field during his career, and the Duffy Daugherty Memorial Award for his contributions to amateur football.

His contributions to the university were recognized in 2008 with the dedication of the Vince Dooley Athletic Complex. A statue and garden commemorate his accomplishments along with the naming of all of the south campus athletic facilities in his honor.

Dooley’s 25 years as head coach earned him the distinction as the most successful football coach in Georgia history. He guided the Bulldogs to a career record of 201-77-10, becoming only the ninth coach in NCAA Division I history to win over 200 games. The Bulldogs won one national championship (1980) and six SEC Championships under his direction. He took his teams to 20 bowl games and coached a Heisman Trophy winner (Herschel Walker, 1982), a Maxwell Award Winner (Walker, 1982), an Outland Award Winner (Bill Stanfill, 1968), 40 First Team All-Americans and 10 Academic All-Americans.

He has authored several books, including two editions of Dooley’s Dawgs (with Loran Smith); My 40 Years at Georgia (with Tony Barnhart); Dooley’s Playbook: The 34 Most Memorable Plays in Georgia Football History; Dooley’s Garden: A Horticultural Journey of a Football Coach; History and Reminiscences of the University of Georgia; and The Legion’s Fighting Bulldog: The Civil War Correspondence of William Gaston Delony, Lieutenant Colonel of Cobb’s Georgia Legion Cavalry, and Rosa Delony, 1853-1863. Dooley also has written an article on the two great football teams on the UGA campus in 1942, which was published in the fall 2014 issue of The Georgia Historical Quarterly.

In addition to his writings, he has also done hundreds of speaking engagements and appearances for numerous charitable causes. Dooley is a former Georgia Historical Society Chairman of the Board and Head of the Nominating Committee. He is also a former chair of the Education Committee and current member of the Government Relations Committee, Marketing Committee, and the Development Committee of the American Battlefield Trust.

A native of Mobile, Alabama, Dooley is married to the former Barbara Meshad of Birmingham. They have four children: Deanna (Mrs. Destry Rogers); Daniel (married to the former Suzanne Maher); Denise (Mrs. Jay Douglas Mitchell) and Derek (married to the former Allison Jeffers), who is currently offensive coordinator at the University of Missouri. The Dooleys have eleven grandchildren: Patrick Cook (married to Lauren Oyler); Catherine and Christopher Cook; Michael and Matthew Dooley (Daniel and Suzanne); Ty, Joe and Cal Mitchell; and John Taylor, Peyton and Julianna Elizabeth Dooley (Derek and Allison Dooley). Two great grandchildren are the most recent additions from Patrick and Lauren: Murphy Elizabeth and Miles Marie are identical twin girls born on Dec. 21, 2018.

Quotes on Vince Dooley through the years

“Vince has shown more common sense in coaching and administration at the college level than anyone I have observed.”
— Bobby Bowden, former head coach, FSU

“He’s been one of my real ‘look up to’ guys. I have always admired him, and respected his judgment. In my mind, he’s been one of the top ADs in the country, and he’s done it the right way.”
— DeLoss Dodds, former athletic director, Texas

“I observed first-hand the impact Vince Dooley has had on the Southeastern Conference. His leadership has played a prominent role in developing the SEC as the leader in intercollegiate athletics.”
— Mal Moore, the late former athletics director, Alabama

“Coach Dooley left a permanent mark on college football, as well as the University of Georgia. His teams were always very well coached and tough to beat as evidenced by his illustrious record. He was one of the best!”
— Terry Donahue, former head coach, UCLA

“Vince Dooley has done one of the truly outstanding jobs in the Southeastern Conference, not only as head football coach at Georgia for 25 years, but also as Athletics Director. He led the University of Georgia through an unprecedented time of success. His leadership and integrity have not only have benefited Georgia but also college athletics in general as he has made valuable contributions to the NCAA and other national committees.”
— Doug Dickey, former athletics director, Tennessee

“Every school needs an athletic director like Vince Dooley. His expertise and his vision and his judgment are unsurpassed by anyone I’ve ever known.”
— Frank Broyles, the late former head coach/athletics director, Arkansas

“Vince Dooley represents all that is good about college sports. As a coach, he cared about his players. As an athletic director, he cares about his university. As a person, he cares about his family and his friends. He’s been a leader, a visionary and a model of success whose talents and accomplishments have helped set a standard of excellence in Southeastern Conference athletics.”
— Skip Bertman, former head baseball coach, athletics director, LSU

“Vince’s experience as a coach and as an administrator made him a valuable resource in any NCAA meeting or on any NCAA issue. We would always seek out Vince’s opinion because he was thoughtful, stable and well-respected.”
— Tom Osborne, former head coach, Nebraska

“Few people have influenced the SEC and all of college athletics as much as Vince Dooley, and he’s always done it with a touch of class. When you think of Coach Dooley, you think of Georgia and you think of class–that’s not a bad legacy–that’s a pretty dawg gone good legacy.”
— David Housel, former athletics director, Auburn