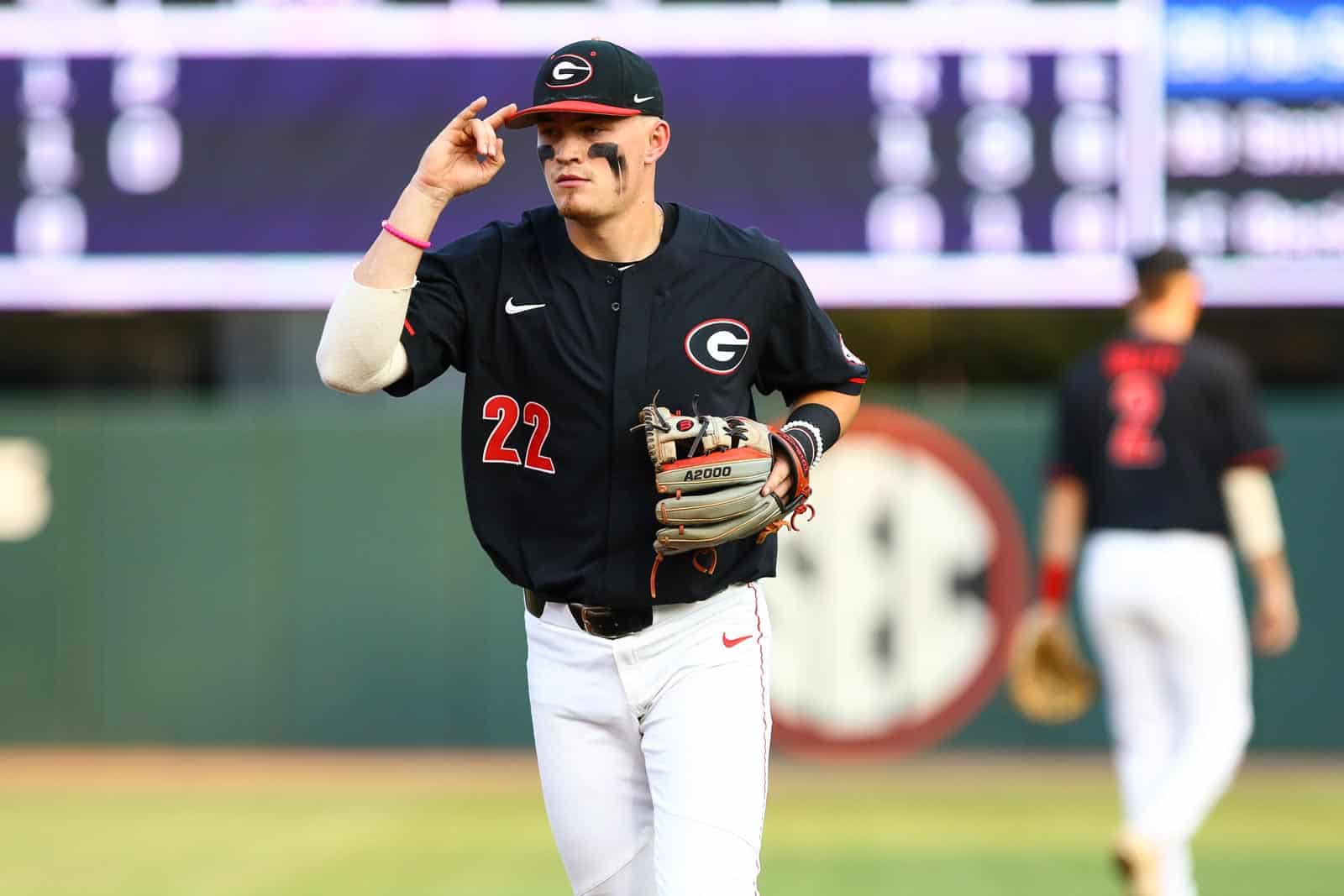 ATHENS, GA – A total of eight University of Georgia Bulldogs were selected during the 2019 Major League Baseball First-Year Player Draft that concluded Wednesday.

Prior to the draft Monday, Shepherd announced he intended to return for his senior year. Additionally, Georgia signee Will Childers, a 6-4, 205-pound right-handed pitcher from Lakeside High School in Evans, Ga., was a 30th round pick of Arizona. The Bulldogs have a string of 46 straight seasons with at least one player signing a professional contract. In 2018, three Bulldogs were drafted and a total of four began a professional career.

The 2019 Bulldogs finished the season with a 46-17 record after reaching the NCAA Athens Regional final. The 46 wins ranked fourth most in school history and the 21 SEC wins was a school record. For the first time in school history, Georgia earned a National Seed two straight years and played host to an NCAA Regional in back-to-back seasons.

Here now is a brief look the eight Bulldogs who were drafted:

The Colorado Rockies selected Schunk in the second round (62nd overall pick). A 6-2, 205-pound native of Atlanta, Ga., Schunk earned the “Triple Crown” for the seventh-ranked Bulldogs, leading the team with a .339 average, 15 home runs and 58 RBI. He became the first Georgia player to do that since 2010 (Zach Cone, .363-10-53). Also, Schunk served as the closer, tallying 12 saves to go with a 1-2 mark and 2.49 ERA in 17 appearances. For the second straight year, Schunk has been named a finalist for the John Olerud Award (nation’s top two-way player) by the College Baseball Foundation. The Rockies selected Schunk as a third baseman.

Schunk started 56 games at third base. He made the NCAA Athens Regional All-Tournament team after batting .375 with four home runs and 13 RBI in four games. An All-Southeastern Conference pick by the league coaches this year, Schunk has played in 154 games with 153 starts in his Bulldog career. He steadily improved as a Bulldog, hitting .290-1-18 as a freshman in 37 games and then .299-3-38 as a sophomore in 60 games last year before a breakout season in 2019. He earned Third Team All-America honors as a utility player by the NCBWA in 2018. A three-year member of the SEC Academic Honor Roll, he also was named to the 2019 SEC Community Service Team for his efforts off the field.

Schunk becomes the highest drafted Bulldog since 2016 when pitcher Robert Tyler went in the first round (38th overall) to the Rockies.

The St. Louis Cardinals selected Locey in the third round (96th overall pick). A 6-3, 235-pound native of Columbus, Ga., Locey led the Bulldogs with an 11-2 record and 2.53 ERA this season. He is the first Bulldog to win 11 games in a season since 1990 when Mike Rebhan (13-5) and Dave Fleming (12-3) headlined the national championship staff. In his Bulldog career, Locey is 20-8 with a 3.92 ERA in 59 appearances including 28 starts. He has tallied 194 strikeouts in 186 innings. Locey was a semifinalist for 2019 National Pitcher of the Year by the College Baseball Foundation.

In 2019, Locey started 15 games and registered 97 strikeouts in 89 innings in helping Georgia go 46-17. He held opponents to a .168 batting average. Locey was part of a staff that set school records for most strikeouts (601) and lowest opponent’s batting average (.200) plus posted the second best ERA in school history at 3.24 and the second fewest runs allowed (235). Twice, he earned Southeastern Conference Pitcher of the Week honors including combining on a one-hitter in a series-clinching win over No. 5 Vanderbilt.

Locey is the first Bulldog drafted by the Cardinals since pitcher Mitchell Boggs in 2005. Boggs helped St. Louis win a World Series in 2011.

The Seattle Mariners selected Elliott in the fourth round (126th overall pick) A 6-1, 200-pound native of Loganville, Ga., Elliott went 7-3 with a 2.38 ERA in 14 starts. He registered 72 strikeouts and just 24 walks in 75.2 innings. In his Bulldog career, Elliott is 9-3 with a 3.10 ERA in 41 appearances including 18 starts. He has tallied 99 strikeouts in 110.1 innings. After pitching just 34.2 innings in his first two seasons with the Bulldogs. Elliott enjoyed a breakout campaign in 2019. Also, he is a three-time member of the Academic All-Southeastern Conference Team. He is on the ballot for Academic All-American as voted on by the College Sports Information Directors of America (CoSIDA).

Elliott provided one of the best postseason performances in school history this past Sunday when he tossed a complete game two-hit shutout to beat Florida Atlantic in an elimination game. It was his first career complete game and just the third NCAA postseason shutout in Bulldog history, joining Dave Fleming (1990 College World Series, 3-0 over Miss. State) and Nick Montgomery (2008 NCAA Regional elimination game, 8-0 over Ga. Tech). For his effort, he landed a spot on the NCAA Athens Regional All-Tournament team.

Elliott was part of a staff that set school records for most strikeouts (601) and lowest opponent’s batting average (.200) plus posted the second best ERA in school history at 3.24 and the second fewest runs allowed (235).

Elliott is the first Bulldog drafted by the Mariners since 2018 when outfielder Keegan McGovern was taken in the ninth round.

In his Bulldog career, Talley played in 221 games including 199 starts. He posted a .280 career batting average with 17 home runs and 108 RBI. He had a career .977 fielding percentage at second base including a school record .989 mark as a freshman in 2016. This past season, he served as a co-captain and was named to the SEC All-Defensive team. He is a four-year member of the SEC Academic Honor Roll.

Talley is the first Bulldog drafted by the Blue Jays since 1985 when they selected outfielder Kerry St. Clair in the 24th round.

The Los Angeles Angels selected Kristofak in the 14th round (421st  overall pick). A 5-9, 185-pound native of Marietta, Ga., Kristofak went 5-0 with a 3.80 ERA and six saves in 24 appearances. He registered 63 strikeouts and just 15 walks in 47.1 innings. In Southeastern Conference action this past year, he went 2-0 with a 4.97 ERA and five saves. In his Bulldog career, Kristofak is 12-3 with a 4.29 ERA and 12 saves in 81 appearances including three starts. He has tallied 159 strikeouts in 134.1 innings. Kristofak has spent time as a closer the past two seasons as well. In 2018, he led the Bulldogs and ranked among the SEC leaders with 31 appearances.

Kristofak was part of a staff that set school records for most strikeouts (601) and lowest opponent’s batting average (.200) plus posted the second-best ERA in school history at 3.24 and the second fewest runs allowed (235).

Kristofak is the first Bulldog drafted by the Angels since 2012 when pitcher Bo Tucker was selected. Currently, first baseman/pitcher Jared Walsh, who played for the Bulldogs from 2012-15, is with the Angels after making his MLB debut last month. Kristofak was a 37th round pick of the Atlanta Braves in 2016 out of Walton High School in Marietta.

The Tampa Bay Rays selected Shepherd in the 20th round (608th overall pick). A 6-1, 187-pound native of Duluth, Ga., Shepherd has started every game at shortstop the past three seasons, a total of 180 games and posted a .972 fielding percentage.

He set a school record for a shortstop with a .987 fielding percentage this past season and did not make an error in 30 Southeastern Conference games. He was named to the SEC All-Defensive Team. At the plate in 2019, Shepherd batted .231 with 13 doubles, eight home runs and 31 RBI. He hit six home runs over the final 16 games of the season. Shepherd was part of a defense that set a school record with a .980 fielding percentage. He is a member of the SEC Academic Honor Roll.

Shepherd is the first Bulldog drafted by the Rays since 2017 when pitcher Andrew Gist was selected. Shepherd was a 29th round pick of the Boston Red Sox in 2016 out of Peachtree Ridge High School in Marietta.

The Philadelphia Phillies selected Maxwell in the 22nd round (660th overall pick). A 6-0, 175-pound left-handed hitter out of Dawsonville, Ga., Maxwell posted his best offensive year by hitting .251 with 13 home runs, 29 RBI and 21 stolen bases in 55 games including 52 starts. In his Bulldog career, Maxwell has played in 164 games including 140 starts. He has posted a .214 career batting average with 21 home runs and 74 RBI plus is 37-for-45 in stolen base attempts. He has a career .982 fielding percentage in centerfield.

Maxwell made the NCAA Athens Regional All-Tournament Team after batting .500 (8-for-16) with two doubles, three home runs and eight RBI in four games.

Maxwell is the first Bulldog drafted by the Phillies since 1995 when centerfielder Todd Crane was selected.

The Atlanta Braves selected King in the 26th round (787th overall pick). A 6-0, 186-pound right-handed hitter out of Lawrenceville Ga., King excelled in his first season as a regular, starting all 63 games and hitting .295 with eight home runs and 43 RBI. King started 35 games in right field, 25 in left field and three at third base plus logged innings at shortstop and second base. The Braves drafted King as a third baseman.

King was redshirted in 2017 and appeared in only eight games during the 2018 campaign. In 2019, King ranked second on the team with 25 multiple-hit games. He is a member of the SEC Academic Honor Roll.

King is the first Bulldog drafted by the Braves since 2015 when pitchers Ryan Lawlor and Sean McLaughlin were selected.