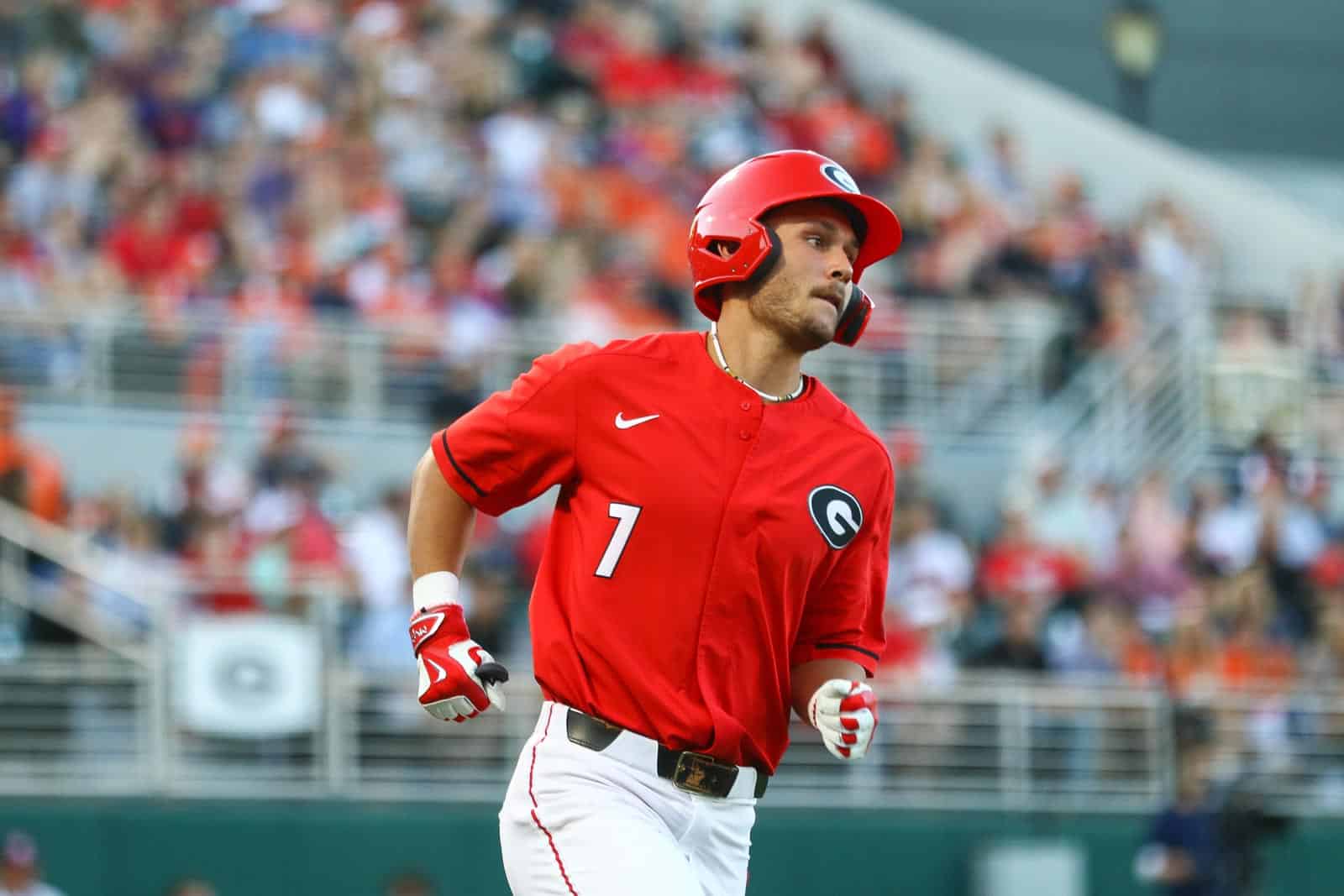 HOOVER, Ala. – Junior Cam Shepherd smashed a two-out, two-run home run in the bottom of the ninth to lead seventh-ranked Georgia to a 2-0 win over 13th-ranked Texas A&M Wednesday in the SEC Tournament.

The Bulldogs (43-14) were getting no-hit until one out in the eighth when freshman Randon Jernigan lined a single to left. He was the only Bulldog in the lineup without a hitting streak as Aggie freshman left-hander Chris Weber was in control. The Bulldog pitching staff was equally as good as Tim Elliott, Justin Glover and Zak Kristofak held Texas A&M to just a pair of hits in nine innings. After Jernigan’s base hit, the Aggies looked to Joseph Menefee.

In the bottom of the ninth, graduate designated hitter John Cable reached with a two-out single to bring up Shepherd. He delivered a two-run shot for his seventh home run of the year including his sixth in the last 12 games. It was Georgia’s first walk-off on a home run since 2008 when shortstop Gordon Beckham hit a three-run blast to beat Georgia State.

Menefee fell to 3-2 and the Aggies dropped to 37-20-1. Earlier in the contest, Shepherd made one of the best defensive plays of the year on a ball hit up the middle by Huner Coleman. It looked to be a base hit but the

All-SEC Defensive shortstop snagged it, spun around and threw him out.

Kristofak pitched the final two innings to improve to 5-0. Elliott provided 5.1 innings, allowing a pair of hits with three walks and four strikeouts. Glover inherited a bases-loaded, one-out jam in the sixth and got Zach Deloach to ground one to first baseman Patrick Sullivan who fired home to catcher Mason Meadows. He stepped on the plate and threw a strike back to Sullivan to complete a double play.

Up next, the Bulldogs play Thursday at 5:30 p.m. ET against the winner of Arkansas and Mississippi State as they face each other Wednesday afternoon.

Dawg Tracks
*Junior Cam Shepherd hit his sixth home run in the last 12 games to give him seven total this year.
*Freshman Randon Jernigan broke up Chris Weber’s no-hit bid with a one-out single in the eighth.
*Georgia won its first SEC Tournament game since 2011 when it reached the semifinals, ending a streak of eight losses at the Hoover Met.
*Georgia’s defense made several highlight plays as it owns the top fielding percentage in conference games this season at .986.
*The five combined hits by the clubs was the second-fewest in tournament history. MSU and Auburn combined for four hits in 1991.
*Georgia is tied with Alabama for the second most walk-off wins in SEC Tournament history with six.

Coaches Corner
Ike Cousins Head Baseball Coach Scott Stricklin
On the game…
“It was a well-played game by both teams and excellent pitching. We finally broke through in the eighth with a hit and then got our second one with two outs in the ninth before Cam’s big home run to end it. It was a great swing and a clutch play by a clutch player.”

Player’s Perspective
Cam Shepherd
On the home run…
“I put a good swing on it, and I thought I got enough of it, and when I saw him get to the wall and time his jump, my head dropped a little bit. Then, I saw he didn’t have it, and it did go out, I got really excited and saw all my teammates come running out of the dugout.”

Up Next
Georgia will play Thursday at 5:30 pm ET in the SEC Tournament against either Arkansas or Mississippi State.