No. 7 Georgia beats No. 5 Arkansas to reach SEC Tournament semifinals

No. 7 Georgia beats No. 5 Arkansas to reach SEC Tournament semifinals 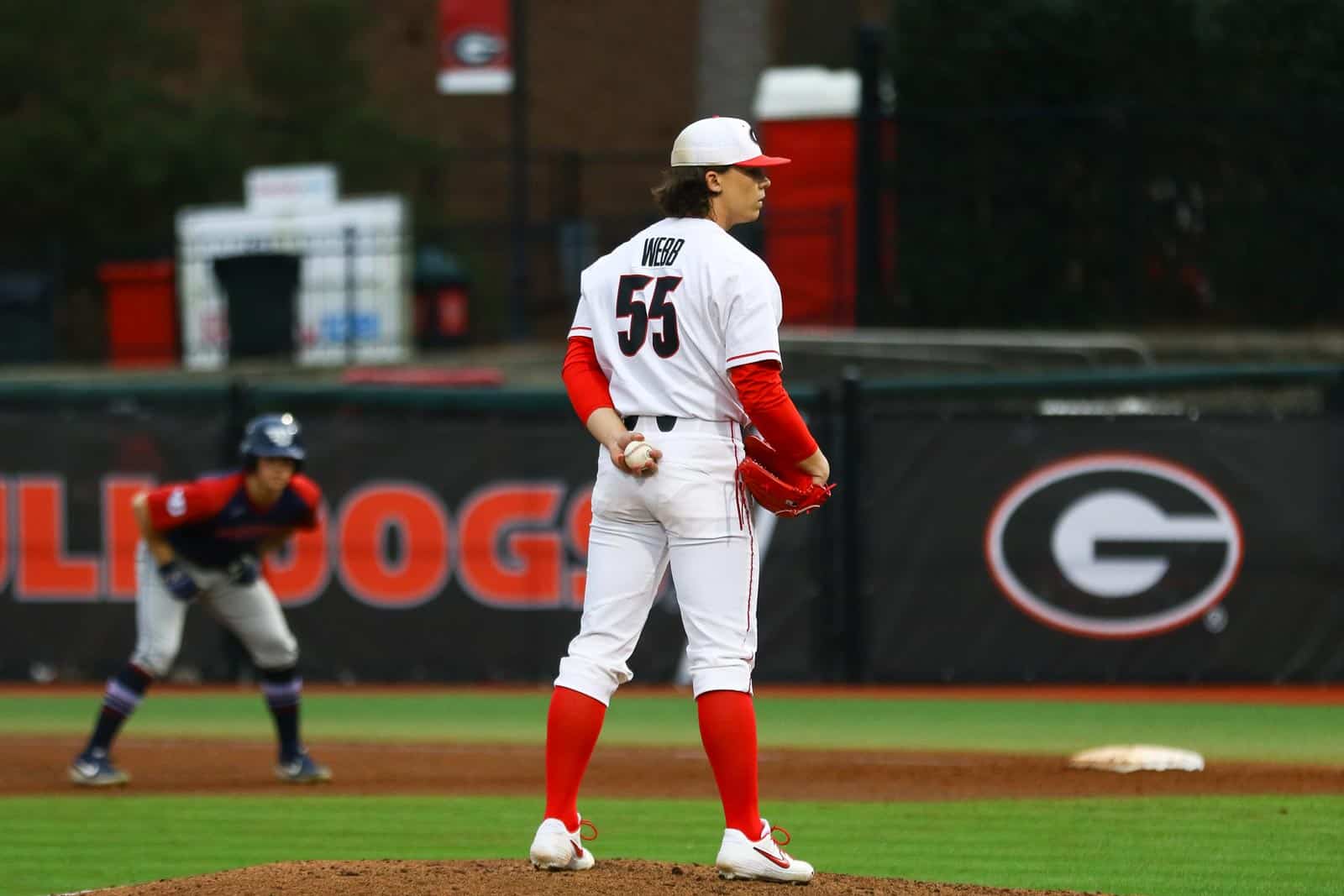 HOOVER, Ala.- Seventh-ranked Georgia ran its winning streak to six by defeating fifth-ranked Arkansas 3-1 Thursday to advance to the semifinals of the SEC Tournament at the Hoover Met.

With their latest win, the Bulldogs (44-14) earned an off day Friday and will face the Arkansas-Ole Miss winner in the semifinals Saturday at noon on the SEC Network. The Razorbacks (41-16) play the 22nd-ranked Rebels in an elimination game Friday.

Georgia erased a 1-0 deficit in the seventh when redshirt freshman Connor Tate delivered a pinch-hit run-scoring double. In the eighth, junior Patrick Sullivan came through with a two-out, two-run double to put Georgia in front. Junior Aaron Schunk ignited the rally with a leadoff double off Jacob Kostyshock. After two outs, the Razorbacks elected to intentionally walk Cam Shepherd. Sullivan stepped up and lifted a sinking liner to left that Christian Franklin couldn’t make a play on and it landed fair and kicked into foul territory, allowing Schunk and Shepherd to score.

Georgia had its first scoring opportunity in the second, loading the bases with two outs on singles by John Cable and Shane Marshall and a walk to Cam Shepherd. However, Campbell came back to retire Chaney Rogers to keep it a scoreless contest. In the third, Georgia stranded a pair in scoring position after Arkansas had taken a 1-0 lead on an unearned run courtesy of a passed ball.

Sophomore left-hander Ryan Webb (1-0) came in and promptly got Christian Franklin to bounce into a double play. Webb picked up his first win of the year, pitching 2.1 scoreless innings with three strikeouts. In the ninth, Webb got the first two outs before allowing a single. Georgia looked to Schunk, After allowing one hit, he came back to strike out Jacob Nesbit for his 12th save and 19th for the staff. Schunk is 12-for-13 in saves opportunities this year. Kotsyschok dropped to 1-3.

Georgia will be making its first appearance in the SEC Tournament semifinals since 2011.

Coaches Corner
Ike Cousins Head Baseball Coach Scott Stricklin
On the game…
It was a well-played game by both teams and the starting pitchers did a good job. Connor Tate gave us some life with another big pinch-hit RBI-double and Patrick Sullivan had a huge at bat to give the lead. Those two hits gave us some momentum, and our bullpen took over. That’s the best Ryan Webb has been, and that’s a good sign because we lost him for about six weeks during the season. He didn’t’ want to come out, and we went to Aaron Schunk and he closed it out. ”

Player’s Perspective
Patrick Sullivan
On his two-run double…
“The pitcher had a lot of run on his ball, and I just had to find a way to find a hole, and it did. When I hit it, I wasn’t sure if he was going to get to it. I’ll take it.”

Up Next
Georgia will play either Arkansas or Ole Miss in the SEC Tournament semifinal Saturday at noon on the SEC Network.