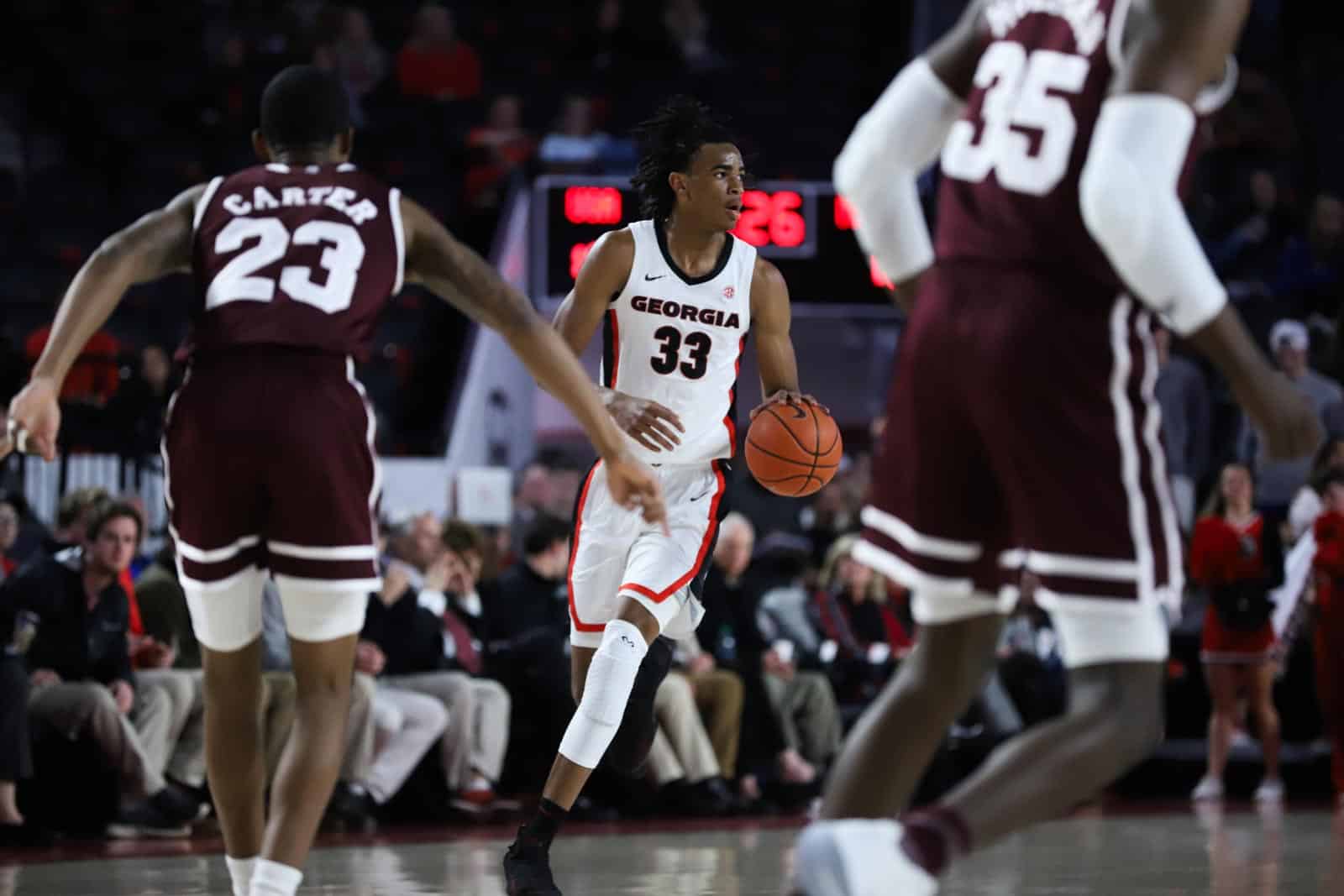 Hammonds and Harris highlighted the Georgia offensive performance. Hammonds recorded his second double-double on the season and the third of his career. Harris’ stellar offensive efforts resulted in two new career-highs, as he tallied 13 points and sank three baskets from behind the three-point line.

On defense, Georgia committed a season-low nine turnovers against a Mississippi State team that ranks third in steals in the conference.

“We had that bad stretch at the end of the first half. We broke some plays, made some sloppy passes, and didn’t have our hands up in the zone,” Georgia head coach Tom Crean said. “We overcame all of that. I’m not sure a couple weeks ago if our team overcomes that. We’re getting better. I think everybody can see it, I hope everybody can see it. The last two games we were good enough to win, but we just didn’t get the result. But we’re absolutely getting better, and we’re going to stay with it.”

Jackson sparked the Georgia offense in the first minutes of play, scoring eight of the first 10 points with two three-point baskets and a layup. A layup in transition by freshman guard Tye Fagan, along with a deep three from junior guard Tyree Crump, brought the Georgia squad within one point of Mississippi State with eight minutes remaining in the first period.

Following a made three-point basket from Harris to tie the game at 20-all, Georgia regained its first lead since the opening minutes of play with a layup from Ogbeide. The Georgia defense strung together two-straight stops, and Claxton’s first basket of the day gave Georgia a four-point advantage with just under four minutes to play.

Mississippi State then went on a 11-0 run within the last two minutes of play in the first period, sending Georgia into the locker room trailing, 36-25.

Out of the locker room, Mississippi State extended its run to 17-0 to give Mississippi State a 42-25 advantage. After knocking down a three-point basket, Harris stole the ball and was fouled going up for the shot. The junior guard sank one free-throw, bringing Georgia within single digits of Mississippi State for the first time in the second half.

With 13 minutes remaining in the second period, Georgia went on a 7-0 run to cut the Mississippi State lead to single digits. Jackson contributed assists in three-straight scoring possessions in under two minutes. Scoring the trio of baskets were Hammonds and Claxton. Hammonds highlighted the 7-0 run with two back-to-back baskets, the last of which from behind the arc. Capping the run was a jam from Claxton to lessen Mississippi State’s lead to five (56-51).

The Georgia offense continued to chip away at the Mississippi State lead. Back-to-back baskets from Ogbeide brought Georgia within four with 4:30 to play, marking the smallest deficit of the second half for Georgia. Harris countered a Mississippi State three-pointer with an and-one to maintain the four-point margin. The Georgia defense came up huge with a steal from Hammonds, resulting in a jumper from Crump to make it a two-point game with three minutes remaining.

Despite the impressive second-half performance by the Georgia offense, shooting 55.2 percent from the field and 55.6 percent from the three-point line, Mississippi State held on to defeat Georgia, 68-67.

• Inching up to the next plateau in Georgia’s career rebounding list, Derek Ogbeide grabbed five rebounds. He is now four boards away from tying Chris Daniels who sits No. 8.

• From the 3-point line, Georgia went 9-for-25 including one that tied the game with 10 seconds to go in regulation. Guards Turtle Jackson and Jordan Harris each hit three. For Jackson, it notched his second-consecutive game with three 3-pointers and fifth game this season with at least three 3-pointers. He had eight such games in his previous three seasons. For Harris, it was a career-high.

• At the half, Mississippi State led 36-25 after finishing on a 16-1 run which included a sequence of 13-straight points. Turtle Jackson had eight of Georgia’s first 10 points and went into the break with the same amount for a team-high. Quinndary Weatherspoon had a game-high 16 points. Weatherspoon, the SEC’s third-highest scoring average (18.1 ppg), finished with a career-high 31 points.

• Sophmore forward Nicolas Claxton, the SEC’s leader in rebounds, had exactly his average at nine.

On the comeback effort…
“We had that bad stretch at the end of the first half. We broke some plays, made some sloppy passes, and didn’t have our hands up in the zone. We overcame all of that. I’m not sure a couple weeks ago if our team overcomes that. We’re getting better. I think everybody can see it, I hope everybody can see it. The last two games we were good enough to win, but we just didn’t get the result. But we’re absolutely getting better and we’re going to stay with it.”

On if the comeback builds confidence…
“It should [build confidence.] It absolutely should. Like I said to them, it’s not my saying and not my rule, but ‘the tunnel is always darkest before it’s light.’ It’s a dark time when you come all the way back like that and don’t get it, but let’s just make sure we get through it and find that light. It’s corny, I know, but it’s the truth. It fits what we’ve been dealing the past couple of weeks.”

On Coach Crean’s message to the team after the game…
“Of course, he was confident. He was a little frustrated like everyone else was. But just telling us, you know, there’s light at the end of the tunnel. Right now, we’re in a dark place, but there’s light. He believes in us. He believes we can beat any team that we play on our schedule, SEC tournament, whatever it is. We just got to keep fighting.”

On what the team is working on as a whole…
“We are a good team. Like Nic [Claxton] said, we’ve just been in a slump. And when you’re in a slump it’s hard to get out. We’ve been competing hard and practicing every day and we just come out in the games and fight the best way we can.”

On Mississippi State’s closing run at the end of the first half…
“I mean, if you’ve got a guy like [Quinndary] Witherspoon, he’s a pretty good player. If a guy gets going, it’s hard to stop him once he’s going. He was making layups, he was hitting shots. It’s hard to stop a person that’s in rhythm but you can slow him down.”