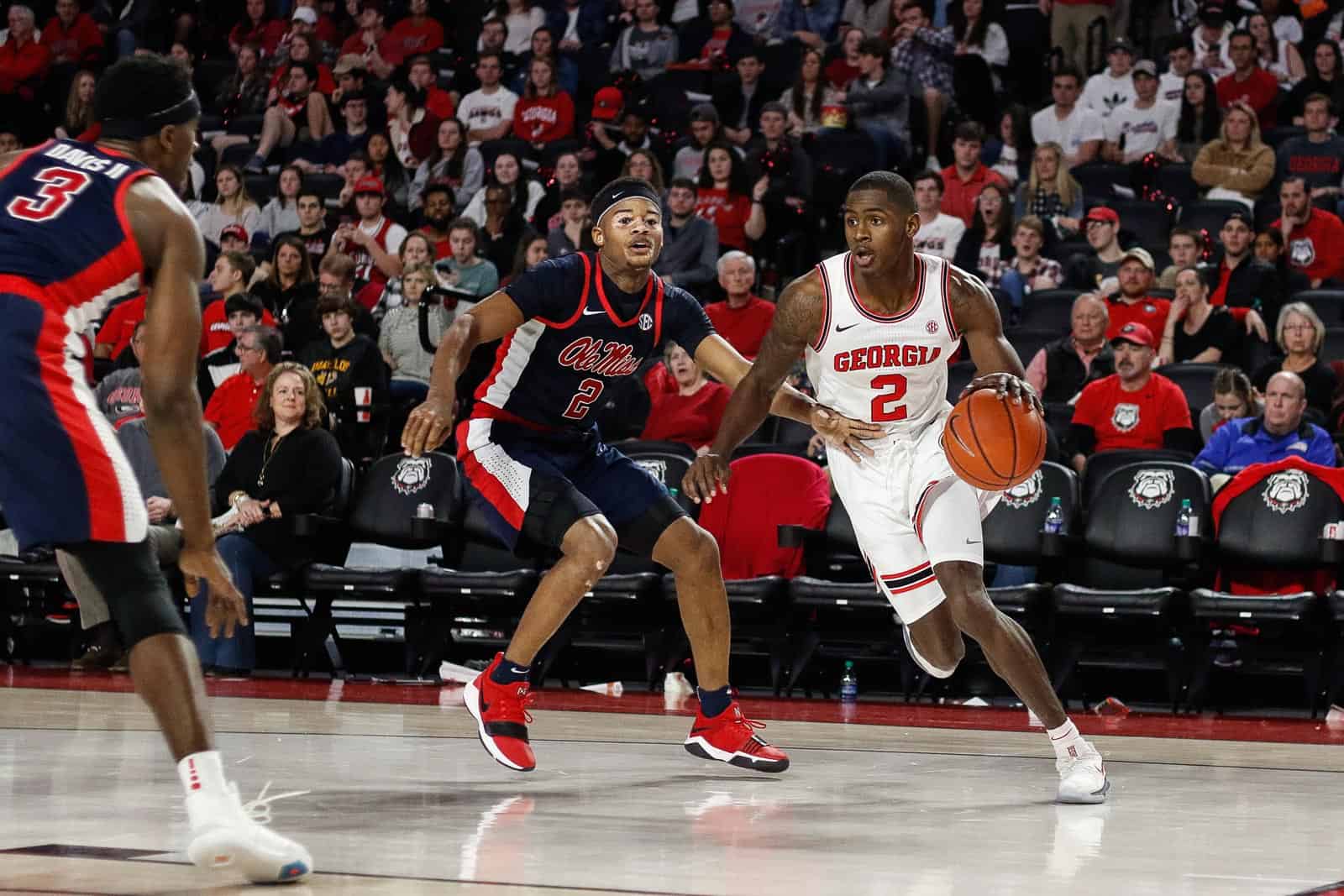 “We want to win games,” said Georgia head coach Tom Crean. “I’ve got to keep looking at what we can do to get this better now, and there is no one answer on how you handle that. You keep giving it. It does start with me, and it does start with my level of energy, my level of confidence, my level of belief. You’ve got to try to get that to them every day, and hopefully there’s other things that they absorb that will make them better through that.”

A 3-pointer from guard Teshaun Hightower started the Bulldog advantage 15 seconds into the game. The teams traded baskets and a pair of free throws from Hammonds brought the Bulldogs into the double digits leading 10-6. Hammonds’ second 3-pointer of the half gave Georgia its first double-digit lead at 18-8 with 15:27 remaining. The Rebels fought back to tie the game 20 all at the 11:29 mark and then took the lead 22-20 a minute later.

The lead changed hands with the game being tied twice at 22 and 25. Ole Miss went back on top at the 7:06 mark with a 3-pointer to make it 30-28 and maintained the advantage for the rest of the game.

Hightower sunk a three to open the second half and bring the deficit into single digits, 36-45. A jumper from forward Nicolas Claxton brought the score to 47-38.

With 13 minutes left, Ole Miss boosted their advantage 55-40. The Bulldogs fought to chip away with a tipin from Claxton and a three from guard Turtle Jackson narrowing the gap to 12. The Rebels maintained their composure and held on to a double-figure lead for the remainder of the game.

Georgia travels to College Station to take on the Texas A&M Aggies on February 12 at 7:00 p.m. on the SEC Network. The Bulldogs return to Stegeman Coliseum next Saturday when they host LSU at 6:00 p.m. That contest is sold out and will be Georgia’s sixth-straight sellout and seventh in the Bulldogs’ last eight home outings.

• Despite today’s loss, Georgia still holds an all-time series record of 73-43 over Ole Miss. The Rebels’ win was the first at Stegemen since January 21, 2012. Prior to tonight, Georgia had won 7 of the last 9 meetings.

• The rebounding battle went to Ole Miss to a tone of 38-32. It marked only the seventh time Georgia has been outrebounded this season and the Bulldogs are 0-7 in those games.

• Two-Block, Two-Steal Game: Nicolas Claxton finished with two blocks and two steals. It is the seventh time in his career that he has recorded at least two of each and they have occurred all this season. He leads the team in both categories this season.

• Moving up in top-10 in Career Rebound: Derek Ogbeide grabbed three rebounds. He is now 14 boards away from tying Chris Daniels who sits No. 8 on the all-time Georgia rebounding list.

• Both Georgia and Ole Miss had seven 3-pointers in the first half. The Bulldogs finished with 11, while the Rebels hit two more in the second half. Teshaun Hightower had three, marking his fourth time having multiple threes this season. Tyree Crump, Turtle Jackson and Rayshaun Hammonds all hit two.

• Junior guard Jordan Harris led the Bulldogs in rebounding for the first time this season.

“I’ll chalk it up right there to the lack of mental toughness, and we knew that. We know that. We’re working on it every day. When you’ve lost some games, you’re going to either move up with it or it’s going to come down. We saw that a little bit too much today. So I have to gauge that. Every day it’s a matter of how we practice and get ready to play, and if I continue to see that type of frustration — here’s what happens. We don’t talk. We don’t talk on defense. And it doesn’t matter if we’re man, it doesn’t matter if we’re zone. We’re trying to protect the paint with switching, we’re trying to mix defenses some, not as much as we’re going to need to, but we don’t guard the dribble very well, so we have to do the switching potentially but when two guys come together and they don’t talk or one guy talks and the other one doesn’t respond, those kind of things happen.”

“We just keep practicing. I could give you a litany of things. I could give you 100, I could give you 150, but here’s the thing: It’s what they absorb. Coaches don’t give guys mental toughness, okay. It’s — your strength coach can give them a better form for physical strength. But the mental toughness has got to come through knowing that you have some ability, knowing that you’re not getting them — we had 16 turnovers in the first half. I just said this on the radio: We may very well have to pull this break off, and because we’re not — that’s not the way it’s going to be at Georgia. I promise you, this is going to be a fast-paced program as we go, but we’re just hurting ourselves with turnovers that make no sense.”

On level of frustration at this point in the season….

“I think we started out the game and it was 18-8, you know we were up. Everyone was knocking down shots, we were in rhythm. And I think those turnovers, the turnovers hurt us but just us not having that fight, and just coming back and trying to hit them in. That is just really disheartening for us to come out like that and not play hard. So we just need to get it right.”

On why mental toughness is just a struggle for the team…

On why the team lacks fight…

On level of frustration at this point in the season….

“For me, I think once everyone on the team realize there will be mistakes made in the game that will help us out. Some guys get down when they make a turnover or frustrated with another player, I think that is just running throughout our team and it really effects us on the court.”

On why the team lacks fight…

“Everybody just got to sell out. We just got to fight till the end. No one likes playing behind. But, sometimes when we get behind and a lot of negative things carry over they just get worse. But that is something we are working on. ”

On how the buying into the new coaching…