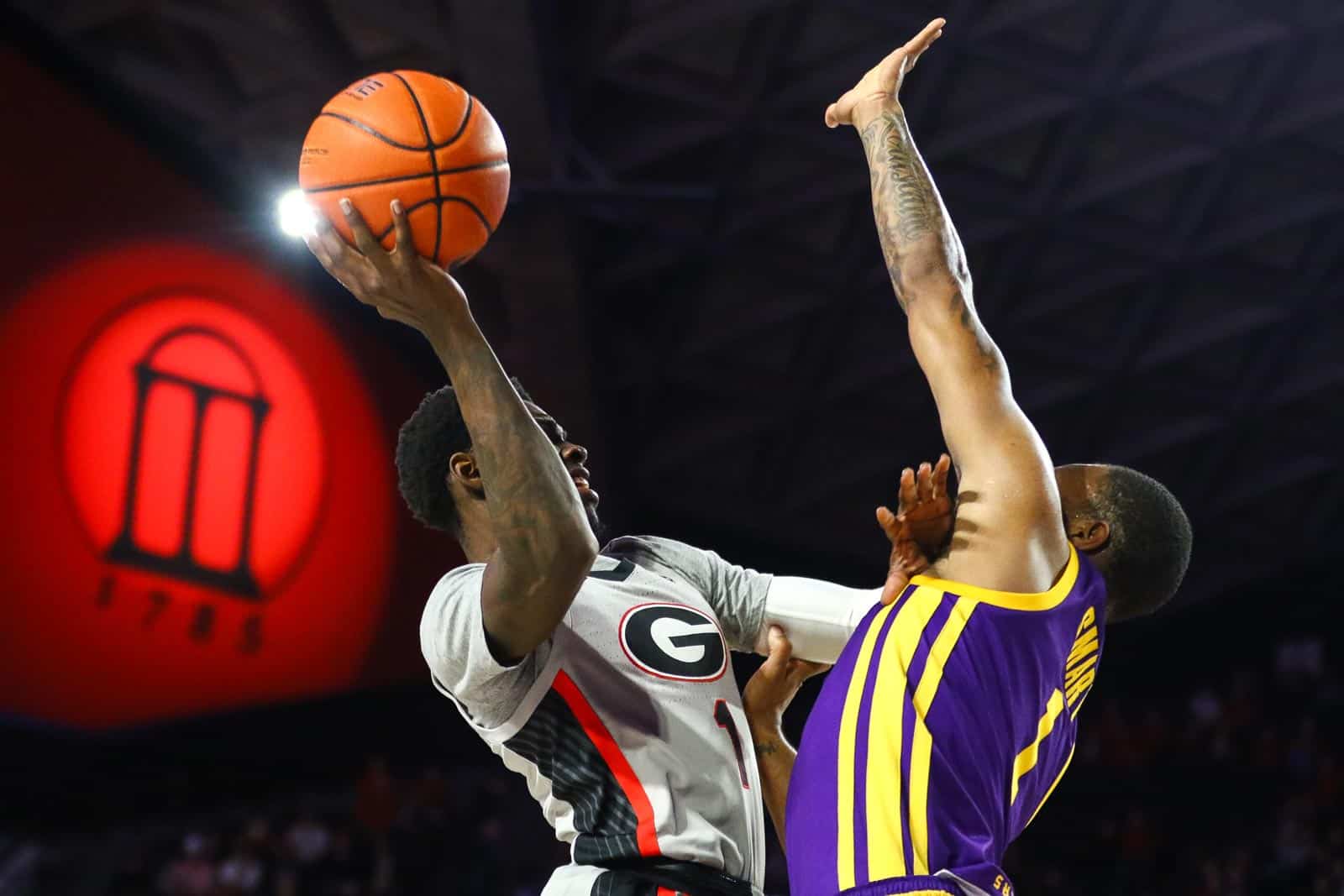 Claxton led Georgia (10-15, 1-11) in points for the eighth time this season with 17. Forward Rayshaun Hammonds added 13, and guard Jordan Harris and forward Derek Ogbeide scored 12 each. Guard Christian Harrison had his first career start and logged a career-high 19 minutes of action.

“This was the best I’ve felt before a game all year,” Georgia head coach Tom Crean said. “Usually my stomach hurts from about 5:30 in the morning on from the nerves and anxiety of getting ready to compete. The way we practiced the past few days, the authority with how we practiced, the intensity, the communication, the competitiveness – all of those things were really good. They’ve been good, but we haven’t always brought that effort to the game. Today, they did, but we fell a little short. If we can build on that, we’re going to win games. No doubt about it.”

Georgia gained the lead to begin the contest and then the game was tied twice in the first three minutes. A 3-pointer from guard Turtle Jackson maintained the Bulldog lead 7-4 at 17:34. Georgia held the lead and a trio of three’s from guard Tyree Crump ignited an 8-3 run resulting in a 20-14 edge.

Following halftime, the Bulldogs tied the game 45 all at the 18:12 mark. The Bulldogs eventually went up by five, the largest of the game, on a 3-pointer from guard E’Torrion Wilridge.

The game was then tied thrice and the lead changed four times over the next six minutes. LSU tipped in the ball to regain the edge 70-68 at the 6:41 mark and led for the rest of the game. A free throw from Claxton narrowed the gap to one at 72-71. The Tigers pulled ahead with a layup a minute later. The Bulldogs chipped away at LSU’s lead, but they were unable to overtake the Tiger victory.

Both teams shot the ball at a high percent. Georgia was 27-for-57 (47.4-percent), and LSU was 30-for-54 (55.6-percent). It marked the third-highest field goal percentage in a Georgia loss with one of the other being the LSU game in Baton Rouge last month when the Bulldogs shot 53.6-percent in a 92-82 loss.

The Bulldogs return to Stegeman on Wednesday, February 20 at 6:30 p.m. to take on the Mississippi State Bulldogs on the SEC Network.

• Georgia went into the contest winning the previous five games in the series between LSU, but the Tigers snapped that streak. The Bulldogs still lead the series when played in Athens to a tone of 28-23. LSU has now won 6 of the last 10 meetings and owns the all-time series 66-47.

• The rebounding battle was dead even at 30-30. Both teams entered the game as SEC’s No. 2 and No. 3 schools in rebounding margin. The SEC’s leader in rebounding, Nicolas Claxton, grabbed six boards to make his season total 226.

• Inching up to the next plateau in Georgia’s career rebounding list, Derek Ogbeide grabbed five rebounds. He is now nine boards away from tying Chris Daniels who sits No. 8.

• The Bulldogs did a good job protecting the basketball with a season-low 11 turnovers. LSU entered the game as SEC’s top defense in steals, averaging 9.4 a game. The Tigers managed six.

• Georgia faced both the SEC Player of the Week and the Freshman of the Week in guard Tremont Waters and forward Naz Reid, respectively. Waters finished with 20 points and five assists, while had 13 points and six rebounds.

“Inch-for-inch, pound-for-pound, he might be as tough and as gritty as anyone on our team. He keeps getting better, and he’s another example of how this program is built on coaching everybody. There’s a grittiness and energy that he brings to the game. He moves without the ball, and he doesn’t need the ball to impact the game. I think the way he went after Waters was very beneficial to us during the game.”

On his thoughts on tonight’s game…

“We had two really good practices leading up to tonight. The fans were behind us the whole game and that gave us a lot of support. But, at the end of the day we just didn’t do the little things we needed to do.”

On if tonight’s play is progress for the team…

“I would say it is progress. Us just playing our hardest for the whole forty minutes. Not coming out in the second half and being in a drought. At the end of the day, we did not want a moral victory. We wanted to come out and get the win. Like I said, it was the little things. I think they had 11-second chance points in the second half. That started with me, I did a poor job of boxing out. So, I take the blame for that. But, all we can do is get back to the drawing board and be ready for our next game.”

On the play coming out the timeout with 29 seconds left...

“Derek (Ogbeide) he kind of set me like a run up screen, I was supposed to drive and make the layup. So, we executed the play right, I just came up short on the layup.”

“I just want to tip my hat off to Christian. He came here last year and didn’t play at all. This year, his minutes have been kind of up and down. But, throughout all of that he has just stayed persistent. He just kept grinding. He comes in everyday and he doesn’t complain like some guys do. He just comes in and works and you see the results today.”

“We played them tough the whole entire game. It can be kind of a moral victory, but we don’t want moral victories. But this does show that they (LSU) are probably top three in the SEC at least. That shows that we can play with anybody. Just come out and try to finish the season strong, that is all we can do at this point. Just keep grinding day by day.”

On Yante Maten and Kentvaious Caldwell-Pope attendance at the game…

“We did not get to talk to them yet. But, I appreciate them coming back and supporting us.  It really means a lot.”

On his matchup against Naz Reid…

“I just wanted to come out and be aggressive. Coach Crean, he instills a lot of confidence in me day by day. Since he has gotten here, he has said just attack. That was the matchup we like. So I just went at him as much as I could.”

On starting in tonight’s game…

“No, I didn’t know, (about starting) I didn’t until a couple minutes before the game started. I had the same mentality I have every game, just to bring energy and try and get a win. That is always the mentality.”

“I would say so. We feel like we can play with anybody. Even though our record doesn’t show it, we come out and we leave it all on the floor. We stay confident, we come out every game thinking that we can win. So, that is always the mindset we try to have.”

On his basketball journey…

“I have had to be very patient. I have had a kind of unique college career. This is really my only second year actually playing, even thought I am a senior. I transferred after my sophomore year at Troy, I was hurt my sophomore year at Troy, so I redshirted. Then, I got here sat out because of the transfer rules. I was eligible last year, just did not play. So, it has been a pretty long journey. I have had to stay persistent and I am just confident”