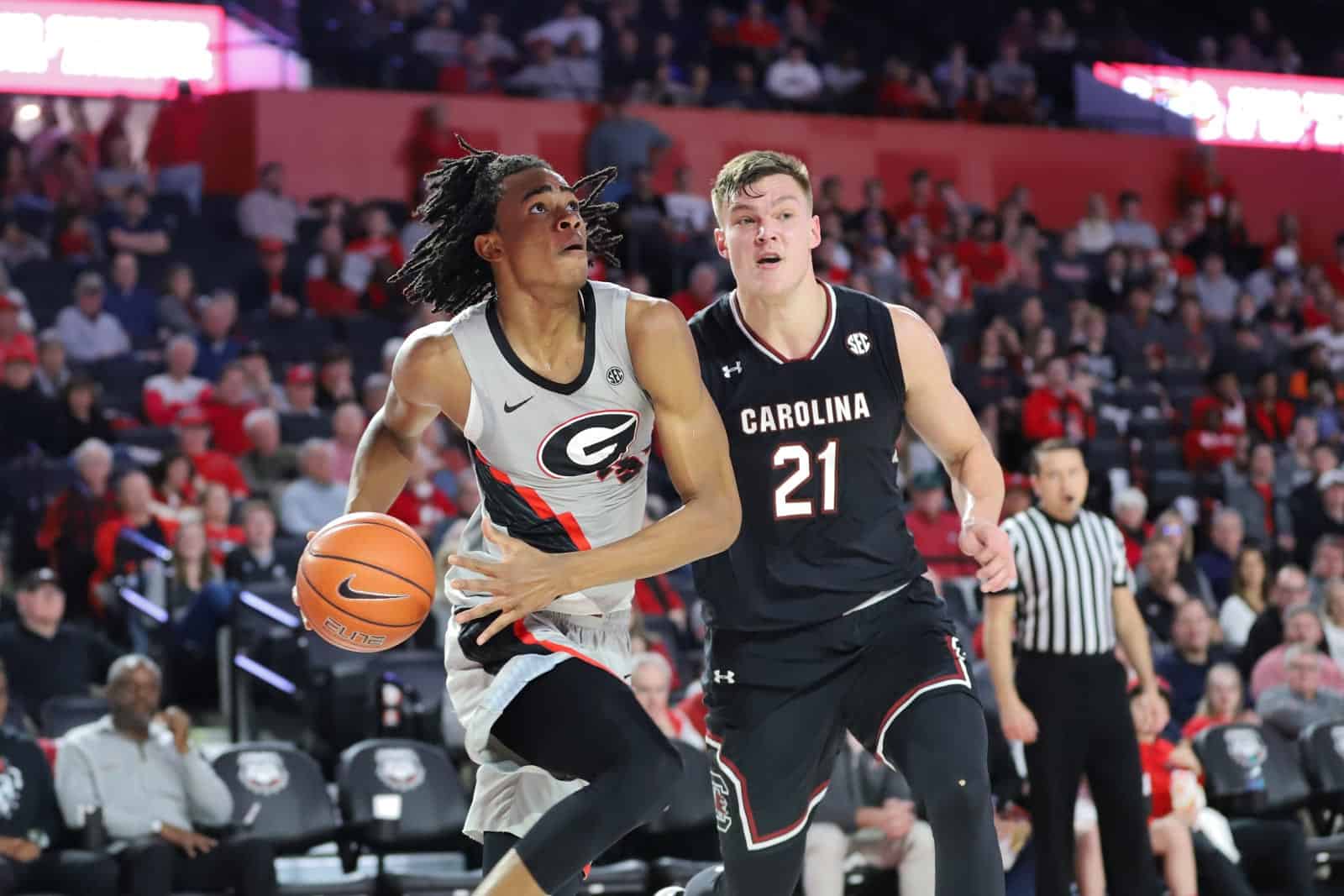 “I had no doubt that our team would come back,” said Georgia head coach Tom Crean. “We were missing close-range shots. We were missing some lay-ups. We were staying on the glass. We were staying aggressive. So it wasn’t about the offense. We missed — definitely we missed some lay-ups, we missed some open threes, but today we didn’t guard the ball well enough and we didn’t guard the shooters well enough. Whether we were in man or we were in zone, we just did not have a hand up the way we needed to, and the basket started looking like Lake Michigan for them because it was open, and I’m disappointed in that because this team is improving in a lot of ways. And those of you that have been covering us, I think you can see they’re improving, and it’s not a — it’s not a moral victory, this speech. It’s a, “we are improving.” But we have got to quit hurting ourselves with not having our hands up or not communicating a switch. There’s no excuse for that.”

Hammonds put Georgia on the board with two baskets and two free throws to give the Bulldogs their first six points of the game. Four Bulldogs extended Georgia’s scoring total at the line, with baskets from Harris, Ogbeide, and sophomores Teshaun Hightower and Nicolas Claxton.

After struggling at the free throw line during the Bulldogs’ matchup against Arkansas, Ogbeide went 6-for-6 against the Gamecocks, marking an additional career high for the Lagos, Nigeria, native.

Despite missing two games due to injury, Harris was efficient on both sides of the ball in today’s game. Defensively, Harris recorded a career-high four steals, while adding another career-high of five offensive rebounds.

Crump started the game 0-of-2 from behind the arc. However, the junior guard ended the game 4-of-9, surpassing his 3-point field goal total from last season.

While the Gamecocks were able to extend their first-half lead to 15, a 12-point scoring spree helped narrow the deficit. Crump scored the first of five-straight baskets to kickstart the scoring frenzy for the Bulldogs. The junior guard knocked down two 3-pointers, while Ogbeide and Claxton added a total of six additional points. Georgia headed into the half down by five, with the Gamecocks leading, 45-40.

Out of the half, the Bulldogs scored on their first two possessions, with a 3-point basket from Jackson and a jumper from Crump. Harris added a 3-pointer off a steal to cut the Gamecocks’ lead to four. Another basket in transition, this time from Jackson, brought Georgia within five with 7:28 to play in the game.

Although the Bulldogs were able to get within three with two made free throws from Jackson in the remaining minutes of the game, South Carolina held on to secure the win. Despite the loss, Georgia ended the game 22-of-25 from the free throw line. This 88 percent free throw performance marks a season-high for the Bulldogs.

Georgia returns to action on the road against Alabama on Wednesday, Feb. 6, at 9 p.m. in Tuscaloosa. The game will be televised on SECN. The Bulldogs will be back at Stegeman Coliseum next Saturday to host Ole Miss at 1:00 p.m. That contest will be Georgia’s sixth overall and fifth-consecutive sellout this season.

• Georgia still narrowly leads the all-time series history at 58-55 and the Bulldogs are 33-19 at home, but the Gamecocks have won the last five meetings.

• The SEC leader in rebounds, Nicolas Claxton collected game-high nine boards for a season total of 195.

• For the forth time this season, five bulldogs finished with double digits in points. (SSU, TSU,TEX)

• 100th Career Block Ties Dad: Nicolas Claxton in the second half got his first block of the game and reached triple digits in career blocks in doing so. The block also tied his father, Charles, in his 1994 season total (58) blocks which is No. 8 on the UGA season block list. Nicolas is now one block away from No. 7 Antonio Harvey (’91) and two from No. 6 Yante Maten (’16).

• Two-Block, Two-Steal Game: Nicolas Claxton finished with two blocks and two steals. It is the sixth time in his career that he has recorded at least two of each and they have occurred all this season. He leads the team in both categories this season.

• Moving up in top-10 in Career Rebound: Derek Ogbeide grabbed seven rebounds to move into the No. 9 spot (741) in Georgia rebounding history, passing Athens native Carlos Strong (739). He is now 22 boards away from the No. 8 spot, Chris Daniels.

Opening statement…
“Well first and foremost were getting better and I can’t let this team lose sight of that. I mean there’s so many things we’re better at and improving on, but we took a step backwards defensively today with the shot challenges. We took a step back with our communication. We didn’t switch the way we were supposed to switch. We tried to make it as simple as we possibly can in the sense of its not about who you’re matched up with, it’s about are we covering the ball? Are we covering the switch? And our communication dropped, and it goes from senior on down. We weren’t nearly active enough with our hand on the ball and we weren’t nearly active enough on the shooting. We just gave them too much space and we kept trying to stress to this team that they shoot the ball well, they shoot it quick. Certainly, [A.J.] Lawson has brought a lot to that team. Trey Campbell is playing as good as he ever has there. We knew the one guy we have to guard, outside of [Chris] Silva, at the top of the key is [Felipe] Haase. We just didn’t do a good job with our hands. We’re just not nasty enough or tough enough on that ball, and there’s times we are, but it’s just not consistent enough. Like I said to the team, we’re missing so many layups, right? I know that we’re going to get those, those are going to come. So even when you’re down the point total that we were in the first half, that’s not an issue because we’re getting good looks. But what we got to do is get stops and we had two or three stops in a row inside of the game. It’s not close to good enough and I’m disappointed. I’m disappointed for a great crowed that did everything they could do to help us. And I’m disappointed that we gave them [S.C] so many looks and they knocked them down. At the end of the game, when it’s a five-point game with two timeouts left and there’s 23 seconds left we put Derek [Ogbeide] back in for the board. We wanted to go quick, go quick and get a two. With two timeouts left and 20 some seconds, my thought process was let’s get the ball inside, and what we wanted to do was get a screen down for Nic [Claxton]. We wanted to get Nic in the middle of the floor so not only could he score, but he could pass if they brought a double into the middle and we didn’t get a great seal. But we missed three wide open threes. At that point, I’m telling the ref score and timeout, score and timeout, because the last thing we want to do is call a quick timeout and have one of those guys get a steal. Now we don’t have a chance to score. We didn’t get them, those shots didn’t fall. We got three good looks, they didn’t go. But we lost this game on challenging shots, or lack of challenging shots and too many easy buckets.”

On trying to make a comeback in the second half…
“We definitely did our part, for the most part in getting stops and getting them handled. We brought it down, I think two or three times, to single digits and just let it slip again. So, it’s that kind of slippage that really is what affected us, it is what lost us the game. It wasn’t the matching the shots, because you’re going to make shots, and you are going to make runs making shots. But, being able to close out that little slippage that we had when we brought it down close was our issue. It was our main issue all game.”

On vibe in locker room with 6 straight SEC losses…
“Combating something like that you have to have a very particular mindset, just to be able to overcome something like that. It can’t be handled regularly it can’t be handled like any other loss or win, those losses stack and they hurt. They literally just hurt so bad, but you can’t think about the hurt, you can’t think about what you are going through selfishly. We literally just turn all of our attention to the next game.”

On frustration of not hitting shots in the start of the game…
“I never get frustrated, You’re a shooter, you shoot untill you’re hot. That’s how I feel. I did not get down on myself because I missed a couple shots. I feel like the next one is going in, and it did. It just started from there.”