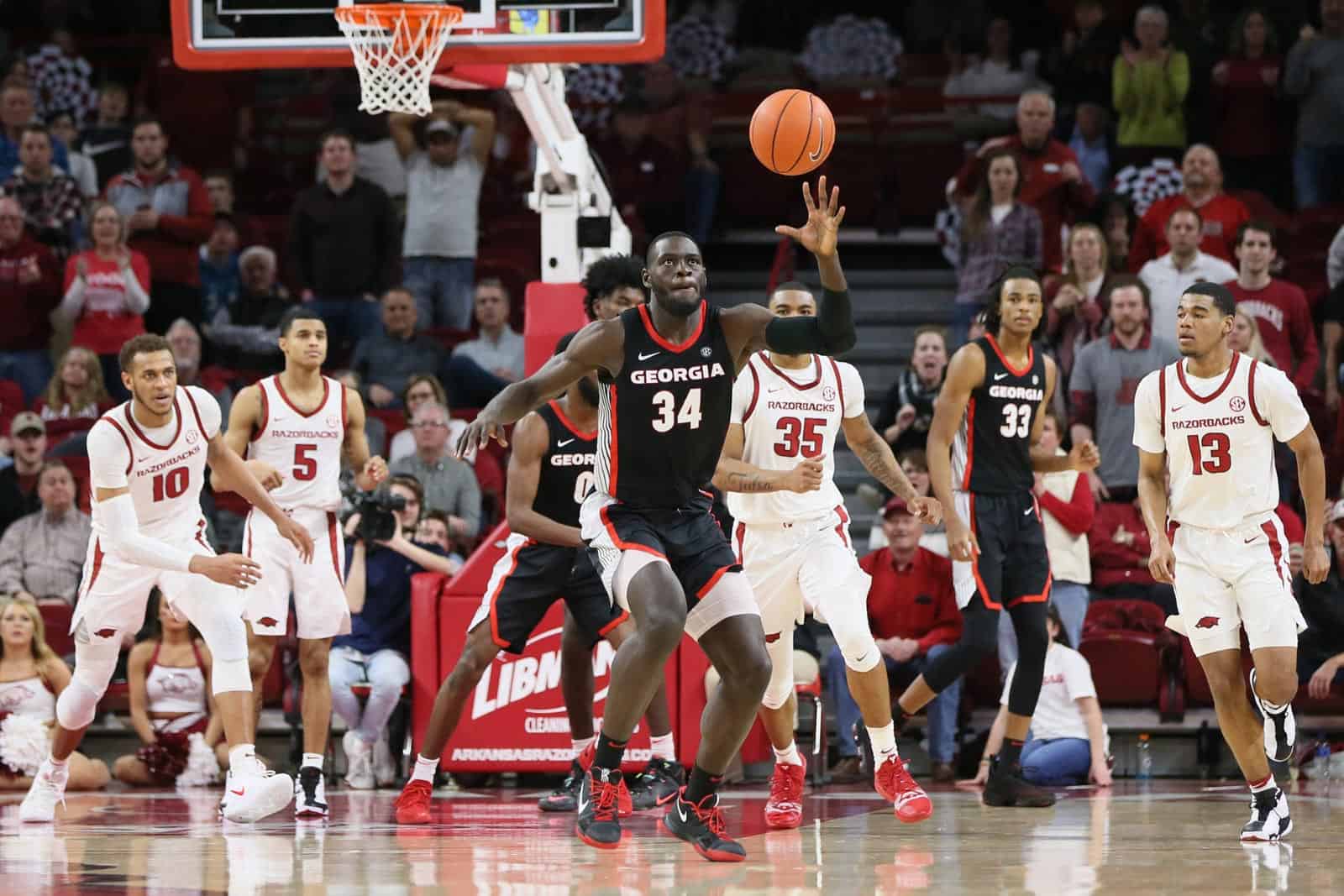 FAYETTEVILLE, Arkansas – The Georgia men’s basketball team dropped its third Southeastern Conference road game of the season with a 70-60 loss to the Arkansas Razorbacks Tuesday evening at Bud Walton Arena.

The game featured seven ties, seven lead changes and the only double-digit lead occurred in the final minute. The Bulldogs held the lead for the most amount of time at 18:12 compared to Arkansas’ 17:39, but the Razorbacks, the SEC’s sixth-best scoring offense, led a vast majority of the second half. Shooting went in the Arkansas’ favor, going 25-for-61 for a shooting clip of 41-percent as Georgia shot 19-for-61 for just 31.1-percent.

“We were in the game the whole way though, we out rebounded this team by 24 on the road,” Georgia head coach Tom Crean said. “I’m not disappointed in our effort and desire was really good. What we didn’t do well was execute. We missed layups and we didn’t shoot very well from the free throw line. They [Arkansas] are a low average free-throw shooting team, but we couldn’t get some of their right guys tonight. We weren’t afraid to being in a situation where we had to stretch the game at the end if we were going to be behind, but unfortunately those guys weren’t in at the end and No. 5 [Jalen Harris] made his free throws tonight.”

Forwards Rayshaun Hammonds and E’Torrion Wilridge grabbed 13 and 10 boards, respectively, en route to Georgia owning the rebound battle, 54-30. Offensively, forwards Nicolas Claxton and Derek Ogbeide led the Bulldogs in scoring with 14 points apiece plus 11 from senior Turtle Jackson. Georgia left points at the free-throw line with a 15-of-29 showing for a 52-percent shooting night.

At the half, the home team held the narrow advantage at 31-30. Off the tip, Georgia was the hotter team, jumping out to an 11-2 advantage. On the game’s opening possession, Claxton scored a layup, and then the next time down the floor, Wilridge grabbed an offensive rebound, and dished it to Jackson for a wide open three-pointer. The Razorbacks answered with a run of their own, tying it for the first time at 14-all. The first half had four more ties, including the last with 23 seconds left. Claxton, Jackson and Ogbeide each had seven points for the Bulldogs, while Arkansas’ Mason Jones had a game-high 15 points.

The Razorbacks extended their lead to five three times in the opening five minutes of the second half, but back-to-back threes from Tyree Crump and Claxton gave Georgia its first lead of the second half at 41-40 with 13:47 on the clock. The game reached its sixth tie at the 12:55 mark and Arkansas broke it with a 10-3 run for a seven-point lead, 52-45.

Fighting back for another tie, Georgia strung together seven-straight points off the hands of a Hammonds’ layup, Claxton free throws and a trey from Jackson. It wound up being the final tie as consecutive Arkansas threes reestablished the Razorback lead with 4:20 left in regulation. Ogbeide answered with a dunk to pull within four, 58-54, but the Georgia defense couldn’t formulate a stop and cash-in offensively down the stretch.

The Bulldogs return to action at home against South Carolina Saturday, Feb. 2 at Stegeman Coliseum. Tip-off is scheduled for 1 p.m. ET and will be aired on SEC Network.