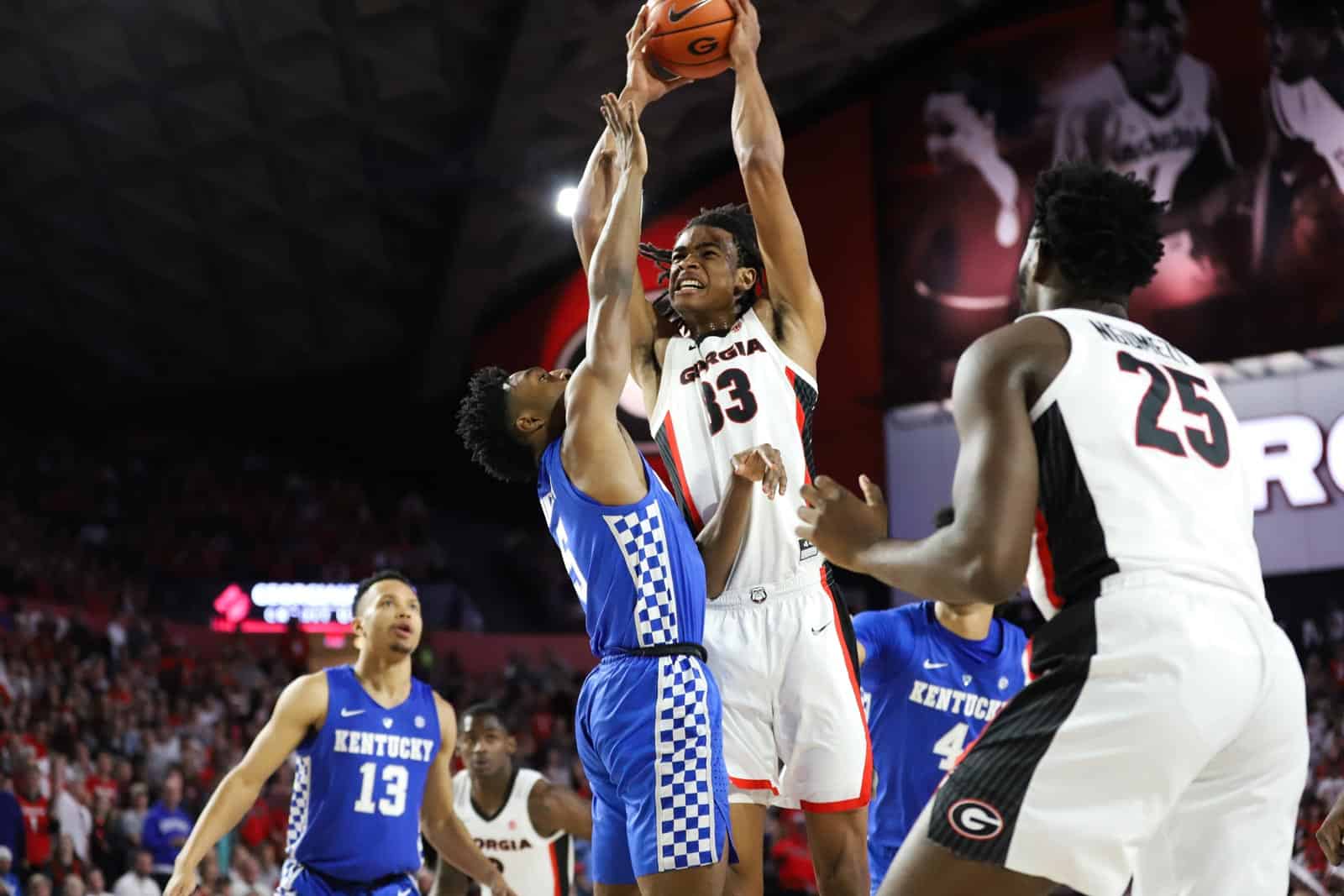 ATHENS, Ga. – The Georgia men’s basketball team fell to the No. 12 Kentucky Wildcats 69-49 in a sold-out Stegeman Coliseum on Tuesday night.

For the fifth time this season sophomore forward Nicolas Claxton led the Bulldogs in points and rebounds with tonight being 12 and nine respectively. This is Claxton’s 10th double-digit scoring game of the season. Fellow sophomore forward Rayshaun Hammonds posted an impressive point total (11) as well marking his 12th double-digit game of the season. Junior guard Jordan Harris notched a new career-high in boards with seven, the second-leading rebounder of the night.

The 69 points scored are the lowest by Kentucky (13-3, 3-1) this season for an offense that ranks fourth in the SEC in points per game with 80.9. After a first half that featured a four-point game, Kentucky leading 35-31, the Wildcats pulled away in the second half on hot shooting. At the half, both squads shot over 40-percent. Leading all players in scoring and rebounding was Claxton with nine and five, respectively. By the end of regulation, the Wildcats shot 43.8-percent (28-64) and Georgia shot 30.4-percent (17-56). In the second half, Kentucky stayed above 40-percent, while the Bulldogs went cold, going 19.2-percent (5-26).

“First off, defensively, we didn’t do a good enough job of taking away their strengths,” said Georgia head coach Tom Crean. “They’re very much a right-handed driving team and a left-shoulder post team. It’s not a complicated game plan. We were going under on [Ashton] Hagans, and if he made a three, so be it. That’s not his forte. His forte is getting in the paint, make plays, and get you to chase him so he can throw it out to the shooters. We wanted to stay home on the shooters, but we also wanted to take away their right hand on the drives and their post-ups. We just weren’t aggressive enough. We weren’t tough enough on the ball. That has been the story when we’ve struggled.”

A strong Georgia (9-7, 1-3) defense blocked two Kentucky shots enabling a jam from senior forward Derek Ogbeide to start the Bulldog lead in the first minute of the game. The Wildcats responded to tie the game but another dunk from Ogbeide secured the Bulldog advantage, 9-6. Kentucky fought to regain the edge, which changed hands over a three-minute span. The Wildcats took back the lead 16-14 at 11:25 remaining, which Kentucky maintained for the half.

A layup and free throw from Harris brought the margin down to two rendering the score 20-18. The Wildcats brought it back up to a five-point spread with 6:34 left but a three from Harris narrowed it back to two at 27-25. Claxton helped to tie the game twice at 27 and 29, but Kentucky took back the edge 31-29 with 2:51 remaining. The teams traded shots that resulted in the 35-31 halftime score.

Coming out of the break, Georgia forced Kentucky into a shot clock violation, but came up empty on the other side of the court as well. The Bulldogs nearly forced another shot clock violation, however Ashton Hagans beat the buzzer with a three, igniting the Wildcats on a 9-0 run for a 44-31 Wildcat lead.

Hammonds scored the Bulldogs’ first second half points at the line and then had a tip-in followed by a Claxton free throw to put the Georgia deficit back into single digits. Kentucky answered with a 3-pointer to grow its lead back to double digits, 47-36, however a transition three by junior guard Tyree Crump dipped Georgia again back below the 10-point threshold. That was the closest Georgia got however as the Wildcats then went on a 8-0 run and kept its double-digit lead for the rest of regulation to seal the 69-49 win.

The Bulldogs return to Stegeman Coliseum Saturday, January 19, at 12 pm to take on the Florida Gators on CBS.

• Another big crowd at Stegemen Coliseum with 10,523 fans. Through nine home games this season, Georgia has averaged 8,442 fans, which is the most since the 2002-03 season.

• Georgia limited UK, the SEC’s fourth-best scoring offense (80.9 ppg coming in) to 69 points for the Wildcats’ lowest output of the season.

• Kentucky is the ninth opponent Georgia has played this season that reached a 2018 postseason and the eighth team that had at least 20 wins last year. The Bulldogs are currently 2-7 in those games.

• A two-block game is now considered an off-game for Nicolas Claxton as he contains a SEC-leading 52 blocks on the season for an average of 3.3 a game – also atop of the SEC. He has 29 multi-block games in his 49-game career.

• Rebounds continue for Nicolas Claxton as he had a team-high nine boards for a SEC-leading 151 total rebounds which is about on par for his average of 9.5 RPG – also tied for the top of the SEC.

• For the fifth time this season, Nicolas Claxton led the team in points and rebounds.

• Another two-block, two-steal game for Claxton who has five such games in his career – all occurring this season.

• The Points in the Paint Battle went to Kentucky to a tone of 40-22. The 22 points ties for the lowest for Georgia on the

“On the offensive end, we missed a lot of open shots. A couple of them we would like to have back, but we missed a lot of open shots. Our heads started to get down. It’s not lack of character, lack of want-to, and it’s certainly not lack of work. But, it’s a lack of maturity when the shots aren’t going and it affects our defense. It’s happened to us before and if we don’t mature, it’s going to happen again. We just have to have some carry over from practice in this. Our cutting, our rolling, when we post. We definitely had some shots on the perimeter. We had 11 the other day and I though we should have made 7 or 8 more at Auburn. We’re going to shoot the ball. They’re not bad shots. We’ve just got to stay confident and knock them down.”

On coming out in the 2nd half…

“We’re not coming out with enough spirit. It’s baffling, it really is. We know we don’t have a true point guard or a true leader. That’s not an excuse to come out without a spirit. There’s got to be a tenacity and a spirit. I’m going to have to start changing the lineup. There’s no one that’s coming out, grabbing the bull by the horns, and saying let’s go. It’s not like we have anyone that’s playing that well throughout the game that they’re not subject to coming off the bench.

On things the team needs to work on after this game…

“After a loss like this you got to really individually look at yourself and every aspect. Even if you played well with shooting or on defense you got to really just try to improve everything. When we have practice on Thursday, we’re going to go hard. Try to keep motivating everyone and make sure we get to class on time Wednesday and get ready for Saturday.”

On losing momentum throughout the game…

“I think that we just had a pretty decent first half. We were down by four I think. I just feel like in the second half we didn’t come out with the right mentality.”

On going into another sellout crowd on Saturday…

“It seems like something we’ve been saying a lot but we got to bounce back and continue to stay confident in ourself. The crowd was behind us the whole game and we just didn’t perform like we were supposed to. We will be ready for Saturday and we expect to have them with us the whole game.”

“Like my mom said, if you hit rock bottom, you can always go up. If people claim that’s our worst game then I can see that next time we face them or face another great opponent that we will do much better. We cant really have our heads down and no one in Dawg nation should have their head down even if it was a loss because if you lose by 1 or you lose by 20 its still a loss. And we’re going to take that as motivation.

On being in a shooting slump…

On things the team needs to work on after this game…