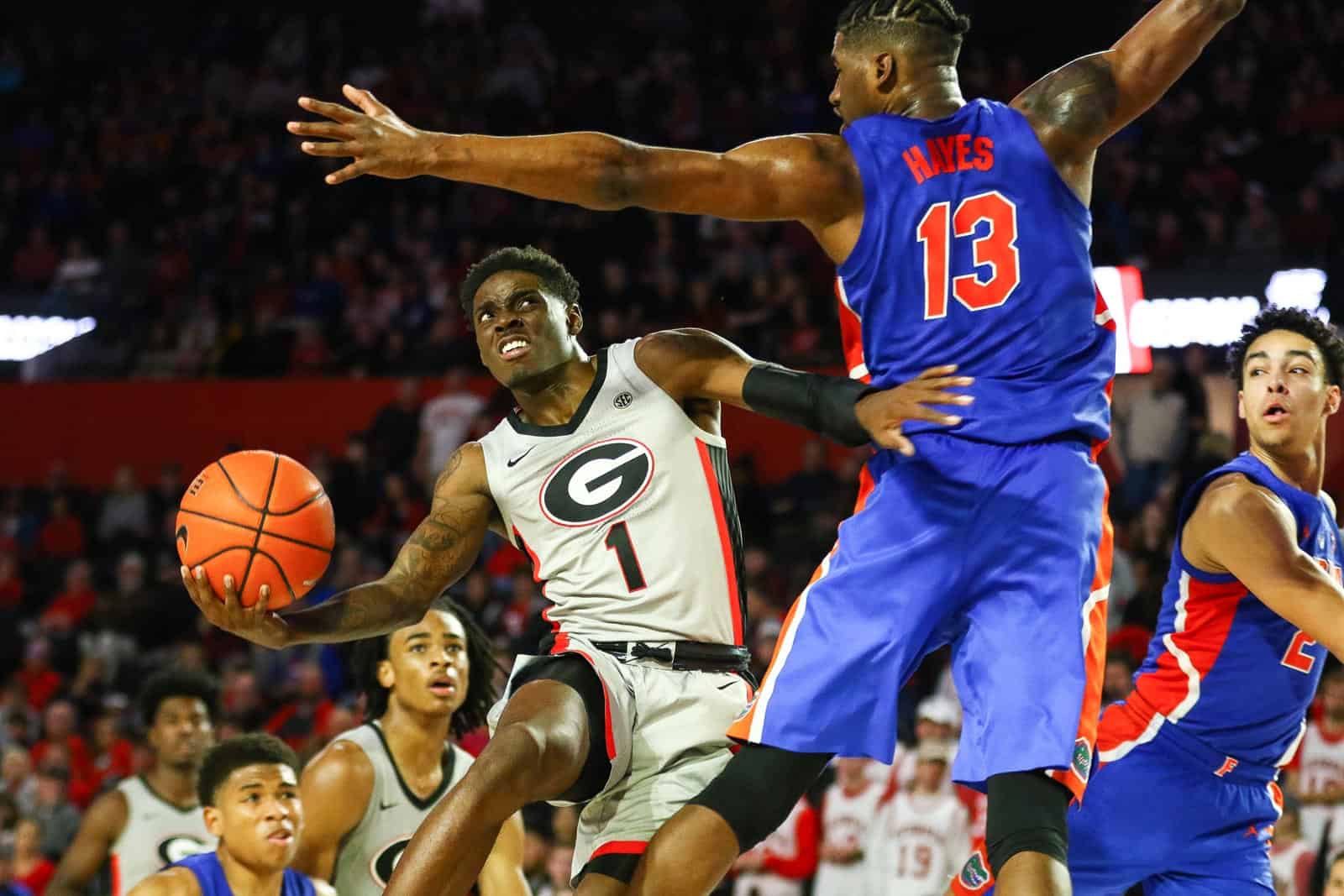 ATHENS, Ga. – The Georgia men’s basketball team lost to the Florida Gators 62-52 in a sold-out Stegeman Coliseum on Saturday afternoon.

Junior guard Jordan Harris was the lead scorer (10) of the afternoon in his first start since his freshman year. The SEC leader in rebounds Nicolas Claxton, a sophomore forward, led the team in rebounds (12) for the 12th time this season in addition to fielding nine points. Senior forward E’Torrion Wilridge played a season-high 28 minutes and also tied his career high of boards (8) and points (8).

“These guys turned it on in the second half,” said Georgia head coach Tom Crean.  “They came out with a different level of intensity and awareness. We were cutting. I was almost hoarse trying to get them to cut off the slots in the first half. Teams want to sit on the elbow area right now on us and dare us to shoot the ball. The only way to get more good looks is get those cuts off the slot. All of the sudden in the second half we do that, and we’re scoring easily. Again, it’s one of those games where play one way in one half and we’re playing one way the second half. We just got to mature and grow through it.”

Both teams showed a strong defense holding the score at zero for the first three minutes of the game. A tip in from Florida (10-7, 2-3) at 17:47 was the first basket to start the Gator lead and an 8-0 run. Harris notched the first Georgia (9-8, 1-4) points with a free throw as the Bulldogs started to chip away at the gap.

Florida kept a 10-point margin but the Bulldogs kept pushing forward. A pair of free throws from Wilridge and a three from junior guard Tyree Crump brought Georgia within four points, 16-12, the closest they came during the half. A pair of free throws from Harris put Georgia on a 5-0 run in the last two minutes of the half but Florida held the lead 33-23 going into halftime.

In the first three minutes of the second half the Bulldogs went on an 8-0 run to bring the score to 33-31. The run was comprised of Claxton, sophomore guard Teshaun Hightower, senior guard William Jackson, and Harris. A trio of 3-pointers in a row from Claxton, Jackson, and Hightower respectively over two minutes tied the game 40-all at 15:40 remaining. A tip-in from Wilridge gave Georgia the lead for the first time, 42-40, at 13:44.

The Gators tied the game then reclaimed the lead 43-42 at 12:01. The Bulldogs answered to take back the advantage 44-43 seconds later. A Hightower basket started a 6-0 run for Georgia rendering the 48-43 score. Florida narrowed the difference to one then took back the lead 50-48 with six minutes remaining. The teams traded scores but Florida continued to pull ahead. A pair of free throws confirmed the 62-52 Florida win.

Georgia finished the contest with a slightly better shooting percentage at 39.5-percent compared to Florida’s 39.3-percent. In the second half, the Bulldogs shot 57.9-percent and held the Gators to 34.5-percent, but it wasn’t enough to overtake the lead.

Georgia travels to Louisiana on to take on the LSU Tigers at 7 pm on Wednesday, January 23on the SEC Network.

• Florida is the 10th opponent Georgia has played this season that reached a 2018 postseason and the ninth team that had at least 20 wins last year. The Bulldogs are currently 2-8 in those games.

• Rebounds continue for Nicolas Claxton as he had a game-high 12 boards for a SEC-leading 163 total rebounds which is above his average of 9.5 RPG coming in – also tied for the top of the SEC.

• The rebouding battle went to Georgia to a tone of 39-28. The Bulldogs have won the battle 12 times this season and this marked just their third loss in those games.

• Georgia scored its fourth-lowest output of the season on UF, the SEC’s best scoring defense (61.8 ppg coming in).

• Coming out of the half, a scoreless Nicolas Claxton scored his first points on the opening possession, fueling an 8-0 run. After hitting just one 3-pointer in the first half, Georgia hit four in the first five minutes of the second half, tying the game at 40-all. The Bulldogs’ next basket marked their first lead.

• Freshman guard Jojo Toppin registered his first points since Texas Southern (12/3) with a tip-in during the final minute of the first half.

“He showed what he’s capable of today. He played every minute except thirty seconds in the second half. E’torrion Wilridge can help us, but he’s got to practice better and compete better. He’s got to be in a situation where he’s not tentative. Today, he didn’t play tentative and he was one of the best players on the floor for us.”

On how we can improve…

“When you play the game to score, you rarely do. When you play the game to move the ball, defend, get on the glass, talk on defense, and when the ball’s finding energy, it’s amazing how many people score. Look how we started in the second half. If we had that understood, we would be much further ahead right now. We saw what can happen in the second half. When we bear down and play the right way with a spirit and a toughness, that’s going to make us different.”

On the moral this week with Coach Crean’s personal loss…

“Most people would crack under it. Especially with his job. I know it’s tough on him, having to get us ready, and having to go through that mentally. I am really fortune to have someone like that as a coach, how strong he is.”

“They made a lot of key shots during that run. While we were on our run they answered it with some great shots. We had some miscues defensively. We had some timely turnovers that killed that momentum. So, think that is what swung it in their favor.”

On the second half play…

“I think it’s hard to keep the pace that we play. I feel like it is hard to keep the pace up. But, our shooting struggles, I think we have plenty enough shooters that those problems will fix themselves. Like Tyree, everybody knows Tyree can shoot the ball. When we struggle it is not that big of a deal because we shoot so much everyday that we are not too worried about missing shots. But, we just got to keep up the pace. The point guards have to keep pushing the ball up court. That is tough for them. I think we just got to keep our pace up.”

On where the team is offensively…

“Coach Crean always preaches play on demand. I think a lot of us have started to buy into that. But early in the season, I think that is what we struggled in. Offensively, we just have to keep executing. You said we had 20something turnovers tonight? We can’t have those live-ball turnovers that lead to points. That really swings the momentum.”

On moral this week with Coach Crean’s personal loss….

“It’s been real tough for him because he has had to go in and out of practices. But we all have his back. Everybody on the staff has his back and we’ve been praying for him and his family. We’ve definitely been encouraging him to keep a positive mindset.”

On what was said at halftime…

“It was kind of a collective effort. That’s something that we’ve really been struggling with throughout the season, so it took all 15 of us to come together and really have each other locked in and ready to play.”

On having 20 turnovers and 24 points scored on turnovers…

“Yeah its crazy because we preach on catching the ball with two hands and making good accurate passes. I really don’t know what the problem is with that. We can just continue to drill on that and make sure guys secure the ball when they catch it and protect it because guys are swatting down trying to take it from you. I think we’ve got to be aware of our surroundings when we catch the ball.”

“Yeah he preaches on our depth a lot. He’s trying to play a lot of guys because we have a versatile team and a lot of guys can do different things. For us offensively, we just got to be confident in shooting the ball, making the right pass. If you have a back door, you have to make the right read. I think the biggest thing is just executing, everybody on the same page and everybody being in the right spot. Spacing is so important the way we play. I think once everybody buys into that it’ll definitely be a different outcome.”