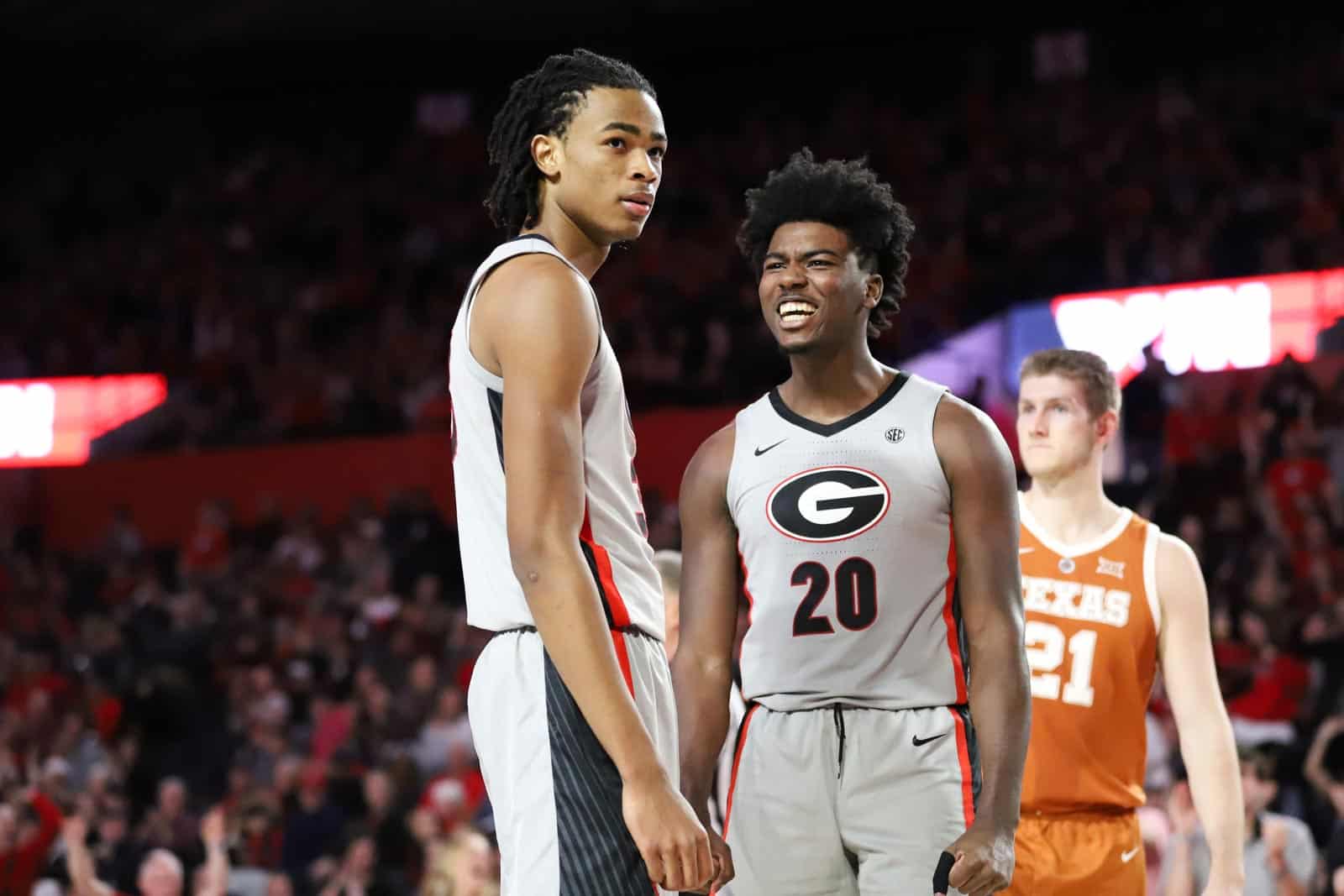 ATHENS, Ga. – The Georgia Bulldog men’s basketball team defeated Texas, 98-88, in the SEC/Big 12 Challenge on Saturday afternoon in front of a sold-out Stegeman Coliseum with 10,374 attendees.

Crump recorded 21 points, posting only the second 20-point performance of his career. Crump shot 6-of-8 from the three-point line. In his 18-point performance, Hightower remained a perfect 5-of-5 from the field and perfect from behind the arc.

Georgia ranks first in the SEC in rebounding offense, averaging 40.4 rebounds per game, which was apparent in today’s game as the first four points of the game were scored off of offensive rebounds, both by Hammonds. Georgia grabbed nine offensive rebounds and recorded 14 second-chance points. The Bulldogs out-performed the Longhorns on the glass overall, winning the rebounding battle with a 36-22 advantage.

“There was no reason for these guys to come into this game today against a great Texas team like they are and not believe that they couldn’t be confident enough to play the right way, and we did. We did not play great, there’s no doubt about that. There’s some unbelievably good statistics on this page, and there’s some that aren’t so good. But the bottom line is, we’ve just got to continue to focus on improvement…with the mindset that, when we’re moving without the ball, when we’re cutting, when we’re playing with five people consistently, the ball is not stopping, our offense can get a lot better.” said Georgia head coach Tom Crean.

The Georgia team gained its first lead of the day off an 11-0 run. Following a 5-0 run by Texas, Crump sparked the Georgia offense by sinking two three-pointers despite being fouled on both. Crump’s second three-pointer gave Georgia its first lead. The Bulldogs began their impressive three-point shooting performance after making seven-straight over a five-minute span. Three Bulldogs, Jackson, Crump and Hightower, contributed.

Going into halftime, the game was tied at 46-all. Georgia shot an impressive 56 percent from the three-point line in the first half. The Longhorns grabbed the first points of the second half, but the Bulldogs regained the lead with another three-pointer, this time from Wilridge. Georgia then went on an 8-0 run with baskets from Hammonds, Wilridge and two from Claxton. The Bulldogs maintained the lead for the remainder of the game and eventually gained their largest lead of the game (13 points) with less than three minutes remaining in the game. Closing the game, Hightower continued his efficient shooting, finishing the game 7-of-9 from the free-point line, clinching the 98-88 victory over the Longhorns.

Georgia will travel to Fayetteville, Arkansas, to face Arkansas on Tuesday, Jan. 29, at 7 p.m. on ESPNU.

• Georgia leads the Texas series 8-5, including a 4-0 mark at home. The Bulldogs are 2-0 versus the Longhorns in the SEC/Big 12 Challenge.

• Texas is the 12th opponent Georgia has played this season that reached a 2018 postseason. The Bulldogs are currently 3-9 in those games.

• The SEC leader in rebounds, Nicolas Claxton collected seven boards for a season total of 179.

• The rebounding battle went to Georgia to a tone of 36-22. The Bulldogs have won the battle 13 times this season and are 10-3 in those games. Georgia entered the contest sixth in the SEC (+4.5).

• For the third time this season, five bulldogs finished with double digits in points. (SSU, TSU)

On the game…
“It wasn’t masterful, but that’s the thing. This is a great example to show we are getting better. Even if the wins have not shown in the last few weeks, we are improving, but we have a lot of improving to do. On the defensive end of the ball, we understand that if we move without the ball, we’re cutting, and the ball is finding energy, we’re hard to guard. When guys are cutting and looking for each other like that, it’s hard to scout and know what you’re going to take away. That’s what we got to continue to do. On the other end, we have to continue to improve our communication defensively when we’re in a switch game.”

On the crowd…
“That is a tremendous win. The fans were from start to finish and in between, the best they’ve been. They’ve been really good, but today they truly, without a doubt, helped us get this victory numerous times in the game. The way they cheered, they got up on their feet, and they way they responded and got loud. We had recruits in here, pretty special ones. They got to see what this is like in here. The fans should all save that ticket stub, because you helped this team immensely.”

On improving our 2nd half play…
“When we’re moving without the ball, we’re going to get baskets. What we have to learn is when we have lulls defensively it’s because we get disappointed because we missed a shot. We let that in-game mistake carry over to the other end. These guys have got to understand, we’re going to score. That’s not going to be the issue. The issue is we have to get the three stops in a row, we have to get deflections, and we have to bear down and put multiple stops together defensively. They’ve been so down at times because they weren’t scoring, and it would carry over to the defensive end and just snowball. Well now if we can take the next step, if we can come down and guard, that makes our cutting and break that much better.”

On how important this win was…
“This game was huge for us. I can’t even tell you how big this game was. Just for us to build our confidence. We’ve been going extremely hard every day, and everybody has remained confident. But, I think today was one of our most complete games offensively. We still have a lot of things we need to work on, especially with the turnovers. We had 26 turnovers. So, that is something we definitely need to get a hold on. But, as far as getting this win, our fans, our fans were great .This is probably the best our fans have been just being there for us in the low points during the game, and really putting a pep in our step.”

On how the team was able to be so effective against Texas’s defense…
“We cut well which opened up a lot of shots for us. They were focused in on me which really opened things up for our post players. Also Turtle Jackson and Teshaun Hightower hit some 3’s for us. Then Texas couldn’t focus on one guy. They had to worry about all of us.”