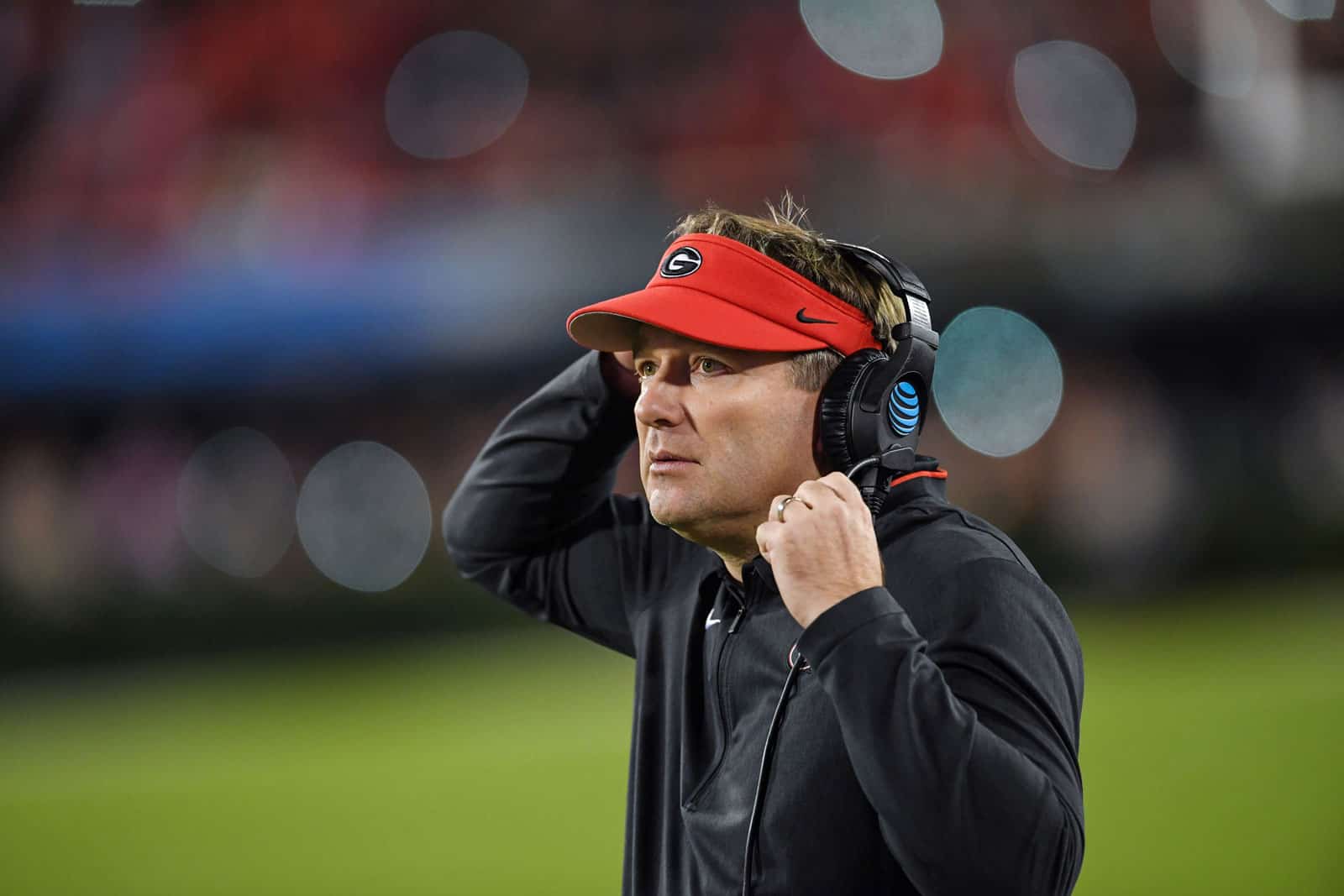 The 5th-ranked Georgia Bulldogs are set to take on the 15th-ranked Texas Longhorns in the Allstate Sugar Bowl on Tuesday, January 1, 2019. The game is set for 8:45pm/7:45pm CT and it will be televised by ESPN.

Below are the comments from Smart, Ledbetter, and Fromm (transcript provided by UGA):

“Thank you. Obviously, it’s an honored tradition for Georgia to be in the Sugar Bowl. I know our team and our university are really excited to play one of the New Year’s Six bowl games. Our players have really ramped up practice since we came back from Christmas break.

“We have got a really great matchup with Texas, one of the premier programs in the country. Got a lot of respect of Tom Herman and the job he’s done. I’m glad we were able to tighten this thing and get a little closer to the game to get our team ready and prepared.

“If you think of the Sugar Bowl and you think of the history that Georgia has, I know a lot of our fan base is excited and a lot of friends I have that went to school at Georgia have said this is an awesome opportunity to come back to New Orleans and play in a great event. So we’re excited to be here.”

Q. “I know you said you guys are excited to be here. Has there been any disappointment or any drop‑off from not making the playoffs?”

COACH SMART: “I don’t think so. I think we addressed that right after the (SEC Championship) Game. We understand that we didn’t control the parts that we had to control to make that game. And we’ve moved on past it. I mean, certainly, I think, when you think about the playoffs and the four top teams in the country, you want to be part of that. Every one of our players will tell you that.

“But we also know the hurdle that’s in front of us in Texas, a team that has got a great tradition, really good football team. Play in a really good conference. So we have a standard that we play to regardless of who we play. And we know we’re playing a really good opponent. And our players are excited for that opportunity. This is one of the best bowls in the country.”

Q. “Justin Fields was on the plane with you. Can you talk about his status? Also, just the trend in quarterbacks, for want of a better word, impatience about them wanting to start. Do you see this as an increasing trend in college football?”

COACH SMART: “I don’t think it’s just impatience of quarterbacks wanting to start. I think every kid on that plane wants to start if you ask them. They all want that opportunity. The unfortunate thing about quarterback is only one of them can start. So it’s not like where we have six defensive backs or five defensive backs or four defensive linemen. It’s a very unique situation. But Justin has practiced with us throughout the bowl. He has done a really good job of focusing on that and worrying about that.”

Q. “Were any of your scholarship student‑athletes not able to make the trip with you?”

COACH SMART: “Everybody that practiced with us in bowl practice is with us.”

COACH SMART: “He’s a tremendous leader. First of all, he’s a really good offensive coach. But he has gone out and gotten an exceptional defensive staff. They have been able to put a really good defense together. I think what he did at Houston, in and of itself, speaks for itself. And then he goes to Texas, and he has turned it around. He certainly has one of the premier programs to do that at, as far as recruiting to do, one of the best states to recruit in in the country. But he has done that well.

“When you are at a place like that, which I know we both share some common situations and we’re one of the major universities in our state and our states are really good at supplying great football players. But you still have to go out and sign them, develop them, and become a good football team, which he has been able to do at Texas.”

Q. “Kirby, can you talk about Deandre [Baker]? Has he reconsidered at all playing in this game?”

COACH SMART: “Deandre Baker is not going to play in this game. He has decided not to play in the game. That was a decision that he came to somewhere around midweek. But he was very honest about it. He was very concerned about it.

“And we at the University of Georgia support him in his decision. It’s a tough decision, when you look at it. And he was forced to make it. He probably spoke prematurely when he was at the Thorpe Award. I think it was on his mind. But he met with his family about it. It was really important to him that he stay with the team. We support him as a coaching staff to stay around the team, be around the team. He wanted to come on this trip to help those other players, help the other corners. So it was a decision that he had to make.

“Look, across the country, there are a lot of guys that made that decision. And it really weighed heavy on that kid. He came to us and told us. And I told him we would support him, and he’s here with us. He’s part of our family. He came back after having a pretty good grade as a junior and decided to play, and he helped get us to this point. But he’s not going to play in the game.”

Q. “Are we going to see Jordan Davis out there?

COACH SMART: “Jordan was inside rehabbing, doing some things. He has had a little bit of a back issue. But he practiced some today. He continued to practice. I think he’s going to be fine for the game.”

Q. “How much has Tyson Campbell done in practice?”

COACH SMART: “He has gotten a lot of reps. He’s getting a lot of opportunities. And we know we’re up against some really good wideouts. They got really big physical wideouts across the board. They do an exceptional job throwing the ball down the field. So we know those guys will get tested, and all the secondary will. So we will try to prepare them as much as we can.

“But we’re excited to be here, guys. We got a great football program. We’re an up and coming program when it comes to setting a standard. We want our kids to play to our standard. And that’s our number one goal is to play our best game in this game.

Q. “Coach [Cortez] Hankton, wide receiver coach, what has he done for this group?”

COACH SMART: “I think he brings a wealth of experience at the position. He commands a lot of respect in that room. He has brought a lot of good ideas to our offense. I think he’s really taken a wide receiver group that was really talented, and he has made them more productive. Our quarterback play has been good. Offensive coordinator has done a good job. But Coach Hankton has brought kind of a by‑committee job to the receivers’ corps where it’s not just one guy. But he has done a great job of doing that. I know he’s from New Orleans, and I know he’s excited to be coming home.”

DL JONATHAN LEDBETTER
On cornerback Deandre Baker decision to not play in the bowl game:
“I support my teammate 100 percent. He talked to us and he talked to his family. I’ve got to support him. He is just in a situation where he is really blessed right now and he is where he needs to be. I’m just happy that he talked to us about it and got our input and we support him.”
On the challenges of the secondary playing without Baker:
“The crazy thing about the secondary is you have to work as a unit, so it doesn’t matter who you put in that position. We have the athletes across the board to be successful. I think the communication is a factor and making sure everybody is on the same page when you’re in there. Our defense is scheme based so if you can fit into the scheme and communicate well and listen to the people in there with you then you will be fine. It will be a fun game.”
On missing the College Football Playoff and playing in the Sugar Bowl:
“I mean, this is the Sugar Bowl. I’ve never been in the Sugar Bowl and I’ve never been to New Orleans so I’m excited. I can’t speak for anyone else but myself, but I’m glad to be here. Just to have the opportunity to play in a bowl like this is special. It is special to Georgia and we want to finish off the season the right way.”
QB JAKE FROMM
How ready are you to play Texas?
“We’re ready. Guys have gone to work. We’re excited to be here. It’s the Sugar Bowl. We’re here, we’re thankful to be here.”
What do you expect from Sam [Ehlinger]’s game?
“We don’t really end up watching too much of the opposing offense, but today on the bus ride to Atlanta they had the Oklahoma-Texas game up on TV, so I kind of got to watch a little bit of Sam and how they play on offense and they play really well so I’m excited to see what he’s going to do in the game and kind of just hope that he doesn’t score too many points.”
What should the legacy of this year’s team be?
“We’re going to come out and fight and if we win a big football game it might show that we could have possibly been in the final four.”
Are you tired of hearing can you get over losing to Alabama?
“That’s past us. We confronted that that night and the following day. The guys have put it behind us. I’ve put it behind me. We’re here now. You can’t change anything that’s happened in the past. We’re excited and ready to play.”