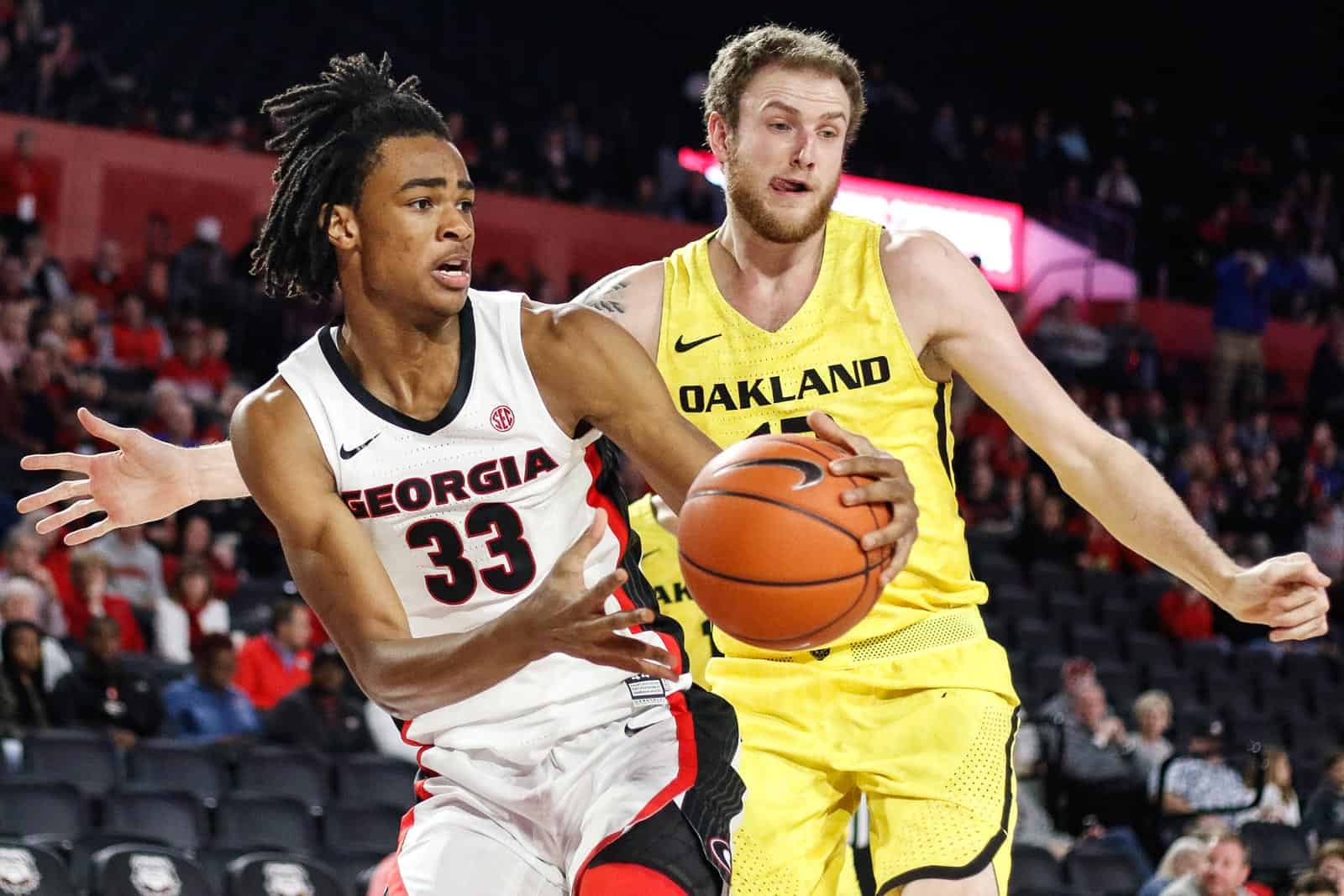 Sophomore forward Nicolas Claxton was one of two Bulldogs with 17 points on the night and notched his fourth double-double of the season with 13 boards. He’s tied for the most in the SEC with all of his double-doubles coming from this season alone. For the second time this season Claxon led or co-led the team in points, blocks, assist, steals, and rebounds. Sophomore Rayshaun Hammonds had his first career double-double with 17 points and 11 boards.

Senior guard Turtle Jackson produced a season-high four threes – all in the first half –contributing to his 14-point total. Sophomore Teshaun Hightower posted 16 points as well.

“I’m really proud of these guys tonight,” said Georgia head coach Tom Crean. “We were on fumes at times and had an emotional game on Saturday. Our fans were electric, and the key is to not let last game turn into to discouragement for this game. There’s a quote I’ve learned from Rev Charles Stanley out of Atlanta who said: disappointment is inventible discouragement is a choice. Disappointment is going to happen, discouragement is our own doing. That disappointment from last game turned into energy, battling, focus and with that something’s gotta give. We were a little fatigued. They wanted to get back on the court after last game and we dug little bit deeper. We played a team that averages 11 three’s a game and a guy that averaged 23 points per game. It was a great finish.”

Georgia notched the first points of the night with a pair of free throws from Hammonds. This established the Georgia lead, which was not relinquished for the rest of the game. Threes from Jackson and Hammonds brought the Bulldogs to an 8-4 margin, before Claxton tipped the ball in to start Georgia’s 9-0 run at 16:08.

To close the run three minutes later and establish the Bulldogs’ first double-digit advantage, freshman Amanze Ngumezi hit a jumper at the 13:46 mark. Jackson’s fourth three finalized a 10-2 run at 10:45 remaining for the 17-point lead, the largest of the game, which the Bulldogs reached twice by the end of the half. The Golden Grizzlies attempted to cut down the Bulldog margin but were 11 points shy at the half.

Coming back to the court 45-34, Georgia increased its lead to 13 with a jumper from Jackson. Georgia managed to keep a 10-plus point advantage until the 15:57 mark when an Oakland three brought the margin to nine.

Both teams exchanged baskets bringing the margin to as little as two in the last five minutes of the game. A dunk and a pair of threes from Claxton upped the gap to six for the 70-64 score before a three from Hightower brought the Georgia lead back to 12 with 2:01 left. A spin move from Hammonds in the paint brought the margin to 14 in the last minute to help solidify the 81-69 Bulldog win.

The Bulldogs head to Atlanta to take on in state rival Georgia Tech on Saturday, Dec. 22, at 12 p.m. on ESPNU.

• The Oakland-Georgia all-time series started in 2015 with a UGA home win. The Golden Grizzlies responded with a home win in 2016, and now the Bulldogs make it 2-1 with another home win.

• For the second time this season, sophomore forward Nicolas Claxton led or co-led the team in points, blocks, assists, steals, and rebounds.

• Block party doesn’t end for Claxton as he added three to total 28 blocks on the season for an average of 2.8 a game – both atop of the SEC. He has 23 multi-block games in his 43-game career. In six games this season, he has at least three blocks. Last season, he finished with four three-block games.

• Neither does the boardwork for Nicolas Claxton as he had game-high 13 boards and a second consecutive double-digit rebound game. Entering tonight, he led the SEC in rebounds per game with 9.4.

• Senior Derek Ogbeide tallied eight rebounds, passing Sundiata Gaines on the all-time Georgia rebounding list. Ogbeide is now at No. 13 with 676, trailing the next player, John Johnson, by eight rebounds.

• For the eighth time this season, Georgia has outrebounded its opponent. Tonight it was 47-34 for a 13-point margin. Entering the contest, UGA was second in the SEC with an average margin of +7.1.

On moving past Arizona State…

“It starts with me because I’m head coach. We didn’t even watch Arizona State film after the game. We had two practices before we watched film. There’s no moral victory in that locker room. We had to bounce right back and instill belief we can comeback. It’s about instilling a plan, here’s what we have to do, here’s how we have to get better. I think u can make mistakes and stay in the last game too long, but my belief and theory is, make the choice on making the team and individual better, then go from there.”

“We moved things around, one of the things we want to do is move people around. We didn’t have Jordan [Harris] tonight he got banged up against Arizona State. We can move guys into different positions. It gives turtle the ball in positions he doesn’t normally get it and allows Teshaun to do some different things. Everyone on our team was jacked up to get Turtle’s shots falling. To have Turtle hit shots, to have Teshaun play the way that he did, that’s big for us.”

“Ray and Nick each got 8 rebounds in the second half, that’s a huge thing. We still have a long way to get a style of play and pace we want it. We made 10 3’s which I was surprised at, but our maturity has to grow into what is the game giving to us.”

“I’ve been around a lot of great rivalries so we told the players it’s up to you to take this coaching staff through the rivalry for the first time. And I have to say this, 7,500 fans on a Tuesday night in December, phenomenal. To have people here the way that they have and on Saturday is so big. To walk out there on Saturday and today and feel that energy. I don’t want anyone driving home feeling like they don’t matter, every person matters and we have recruits here and it’s very important so I’m just extremely appreciative.”

“We brought a lot of energy out. We made sure we listened to Coach Crean. He told us we needed to execute and make sure everyone is prepared mentally along with physically to go out there and win the game.”

On his solid three-point shooting night…

“God answered prayers. Me and my mom were feeling as if there was a lid on the goal, so I was hoping to breakthrough, and he answered the prayers. I’ve been praying as well as working with Coach Crean and listening to him. It wasn’t me making those threes; it was God out there making them for me.”

“We wanted to win. We came out and executed the defensive plan, and made sure they did not have any threes because Oakland is a great three-point shooting team as well as they crash the offensive boards.”

“Like Teshaun said, the ability to listen is really just focus. Making sure we were focused on what Coach Crean was saying, and execute defensively and offensively. We needed to focus in a lot more, and not worry about the t-shirt toss and things like that.”

On closing out the second half…

“It’s not like a here we go again because to define that would be panicking. That’s the main thing you don’t want to do in the game of basketball. We just had to make sure we came out and made those plays, which comes from effort, and focusing in on what Coach Crean was saying.”

“We also needed to be a player-driven team, talking and communicating, and we ended up getting through it.”

“We stuck to the game plan. We talked on defense more, and talked as teammates more, which ended up helping us pull through.”